Whether wildfires, tornadoes, power plant meltdowns, explosions, epidemics, bankruptcies, school shootings, Godzilla invasions, or roving bands of undomesticated alpacas on the loose, the essential agreement for a disaster to capture the public eye is magnitude. This isn’t brain surgery. Size is generally the variable that semantically distinguishes disaster from catastrophe, or separates predicament from setback. Continuous sensory bombardment means that our brains instinctually filter out the less significant or less provocative. We can’t take it in every little episode. All the various media outlets (which, lest we’ve forgotten, is simply the plural form of the word “medium”) instinctively follow the leads, and those leads have to be a certain scope or there’s likely no remuneration. The national press is unlikely to cover two people killed in a small-engine Cessna crash, but if a Boeing 747 fails, every outlet will be jumping to cover it within minutes. Unless these media outlets lack a profit motive, they must cover what historically and customarily captures the public attention—and size nearly always matters.

But this means that a lot of nasty little natural disasters (predicaments, setbacks) fall outside the radar. And for the people entrenched in those settings, it is undoubtedly as big of a calamity as the swarm of locusts. The biblical analogy is that much more apt in this case, because the community in question owes its identity from the Book of Elijah—the home of the widow whose son Elijah miraculously revived. The widow’s home of Zarephath provided the distinctive name for this unusual community in northern New Jersey, with a 2010 population of 37. 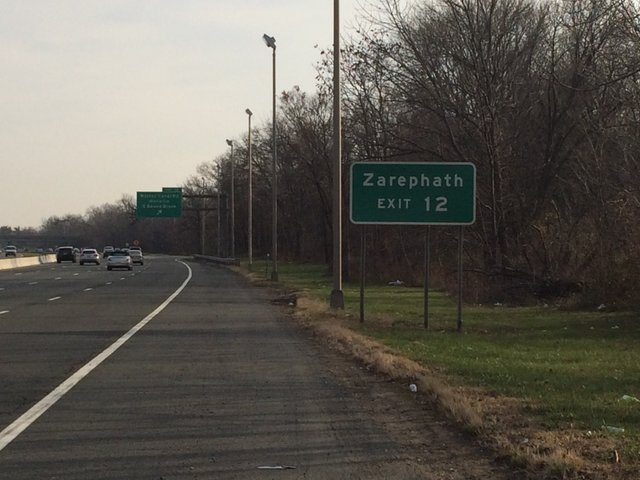 The exit sign comes less than a quarter mile from the actual exit, visible in the distance. And for whatever reason, the roadside information on the closest interstate (I-287) lists all the other municipalities at Exit 12 on one sign, but then Zarephath gets a separate sign, almost like an afterthought. Sure, it’s small. For that reason, it gets very little attention—further substantiating the initial thesis of this essay. But Zarephath, over the last few years, has suffered what might be a setback from a New Jersey perspective…but it was a catastrophe for Zarephath.

Like so many other settlements, Zarephath rests in close proximity to a body of water. It belonged to a farming family, who in turn donated the property in 1901 to Alma Bridwell White, the founder of the Pillar of Fire International Church and first female bishop in the United States. Rev. White deserves an article unto herself—or even a Hollywood biopic—but suffice it to say, since this a blog on landscapes and settlements, the focus here is on her legacy in Zarephath. 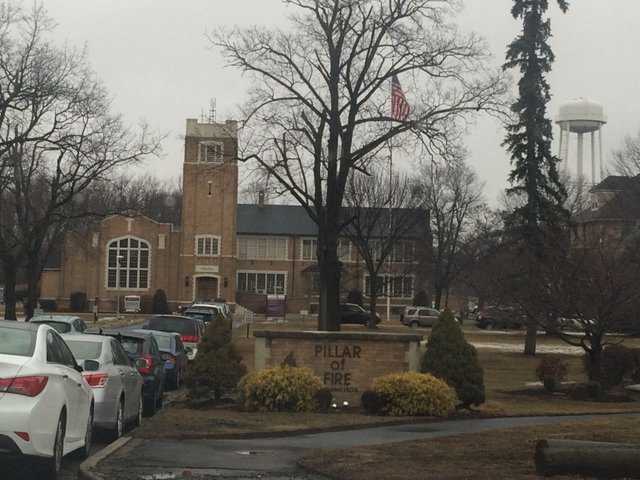 Zarephath, the Pillar of Fire campus and Somerset Christian College campus are, for all intents and purposes, one and the same. But what initially might have seemed like a terrific real estate deal soon turned sour, as the land that comprises Zarephath rests in a floodplain—which, by most American metrics, means that, in any given year, the property stands at least a 1% chance of significant flooding. And, as a result, Zarephath floods. Frequently.

Since the majority of major cities sit in close proximity to a major body of water, flood prevention and mitigation are major considerations across much of metropolitan America. And we’ve all seen the devastating effects of flooding on settlements large and small. At this point, the aftermath of Hurricane Katrina remains, for most Americans, the most widely-publicized catastrophic flood event in recent memory. It was, of course, devastating: a decade later, huge portions of New Orleans and the Mississippi Gulf Coast remain spotty in their recovery. But not 100% of the city flooded: though the majority of the 169 square miles of land area sits within a floodplain, many of the best-known neighborhoods are well above sea level, thanks to the Mississippi River’s continuous depositing of silt, which builds a sort of natural levee, placing those areas in close proximity to the banks (generally between a quarter and half of a mile) well above sea level. And so most of the French Quarter, Faubourg Marigny, Bywater, Garden District and Uptown all dodged the bullet.

Other places haven’t been so lucky. In fact, New Orleans is probably an extreme outlier: an early settlement that managed to flourish in spite of the fact that teetered on the edge of extreme disaster. When Jean-Baptiste Le Moyne de Bienville first claimed this crescent-shaped bend in the Mississippi, he had a hunch that it might prove strategic in trade, but he never could have anticipated that it would grow to what was at one time one of nation’s ten largest cities, and certainly for many decades the biggest city in the South. No one would have expected it: after all, countless other areas settled in what proved to be floodplains, and they learned the hard way. It’s hard to imagine what communities across the country might have surged in population at one time, only to have a major flood thwart their growth. It’s probable that some towns that might have flourished in 1810 are no longer extant; repetitive losses forced the population to abandon the area and seek higher ground.

Such incidents are naturally far less common today. But, as Zarephath learned in 2011, it can still happen. While the reality of flood-related damage and recovery is understandably complicated, it is possible to provide a capsule summary of the key considerations as they apply to this strange little community.

At its most basic level, the National Flood Insurance Program (NFIP) serves as the primary institution for addressing properties (public and private) devastated by floodwaters.   Flood Insurance Rate Maps (FIRMs) diligently spatialize flood risk according to standards that define a floodplain, which for many years served as the basis for establishing premiums and risk under the NFIP. After the catastrophic flood-related losses of Hurricanes Katrina, Rita and Wilma in 2005—greater than all losses incurred from 1968 to 2004—Congress reformed the National Flood Insurance Program through the Biggert-Waters Flood Insurance Reform Act adopted in 2012. Under this act, FEMA, who administers the NFIP, can pay up to 90% of costs for mitigating flood-related damages to repetitive loss properties—which often translates to elevating the habitable portion of a structure to above the base flood elevation, but restricting improvements to 10% of the structure’s value and in full compliance with floodproofing requirements stipulated by local building codes.

At the same time, some places suffer such persistent flood-related damage that it is impossible to justify the costs for mitigation in relation to the considerable risk. Zarephath appears to have passed this threshold, based on its inauspicious location between the Delaware and Raritan Canal the Millstone River. 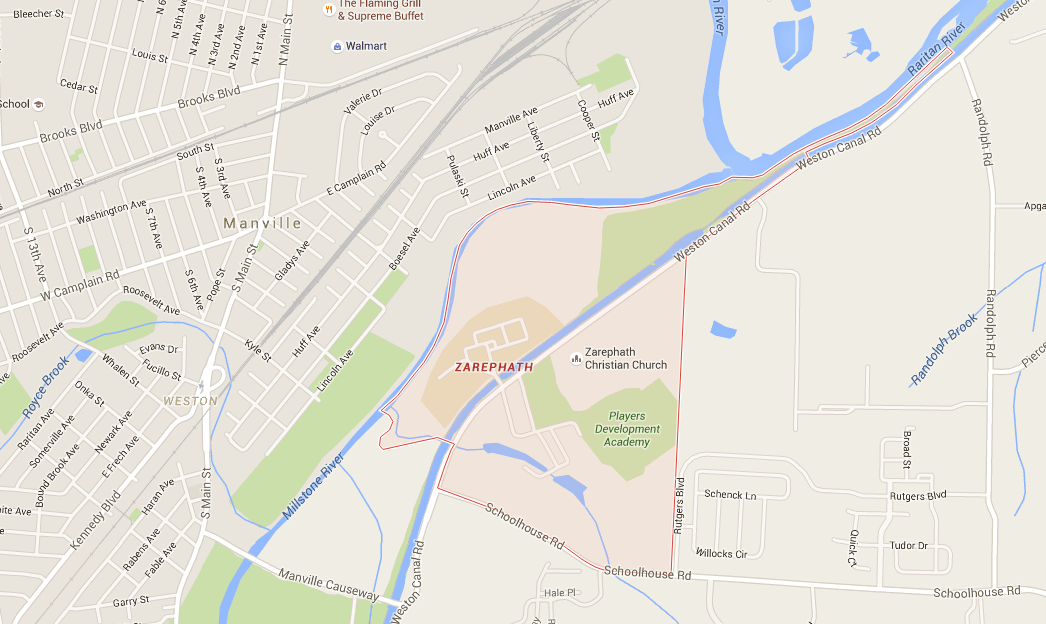 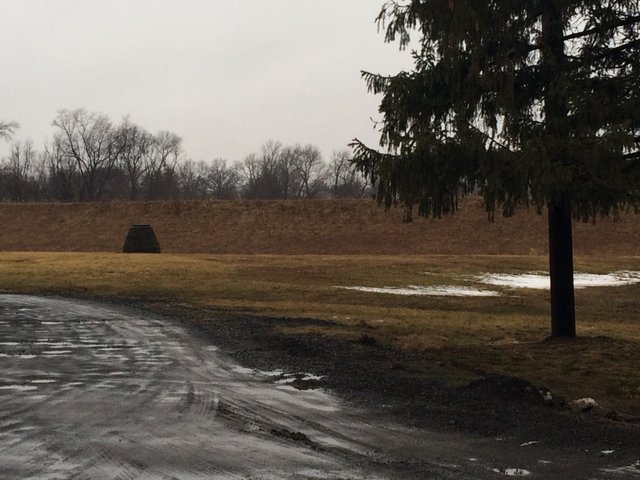 In FEMA’s world, the rough definition of “Severe Repetitive Loss Structure”  is any residential structure that is covered by the NFIP and has incurred flood-related damage for which at least four separate claim payments have exceeded $20,000 in aggregate. Even under these conditions, FEMA will pay what the NFIP allows (usually up to 75% of the cost), provided that the claimant will elevate the severe repetitive loss structure up to regulatory flood elevation (including a basement), that the restoration includes no expansion or enlargement in the direction of the watercourse, and that improvements only pertain to floodproofing or mitigating measures—any other improvements beyond 5% of the structure’s market value shall be prohibited.

And I suspect there’s the kicker for Zarephath. After suffering tremendously from Tropical Storm Doria in 1971, Hurricane Floyd in 1999, and, most recently Hurricane Irene in 2011, it is difficult to for leadership at the Pillar of Fire Church to justify continued flood insurance claims, particularly when it locks the church into a strict standard for restorative reconstruction.  Since the majority of structures in Zarephath sit in this floodplain, Hurricane Irene was a near total loss. Two years later, the president of Somerset Christian College—the academic arm of Pillar of Fire International—announced that it would permanently depart the Zarephath site and move its operations to an office complex in nearby Somerset New Jersey, under the new name Pillar College, in an effort to expand the small school’s scope outside Somerset County. The Zarephath campus simply no longer worked; the flood risk was too great.

Part II of this article will look at the church and the campus in the aftermath of this decision, as well as how Zarephath retains its identity after flooding threatened to annihilate it.