A topic as prominent as teardowns deserves a vigorous analysis, which I’m prepared to offer at some point in the near future. In the meantime, I hope to whet the appetite through this brief montage, to help familiarize those who otherwise don’t understand the context for this relatively recent phenomenon.

But what is a teardown, and why not just use the word “demolition”? Without a series of photos taken at regular intervals over the course of a year or two, it’s impossible to depict a teardown in action. But usually it’s easy to tell, simply from the aftermath. The image below perfectly captures a teardown in its last stage before completion—the regeneration. 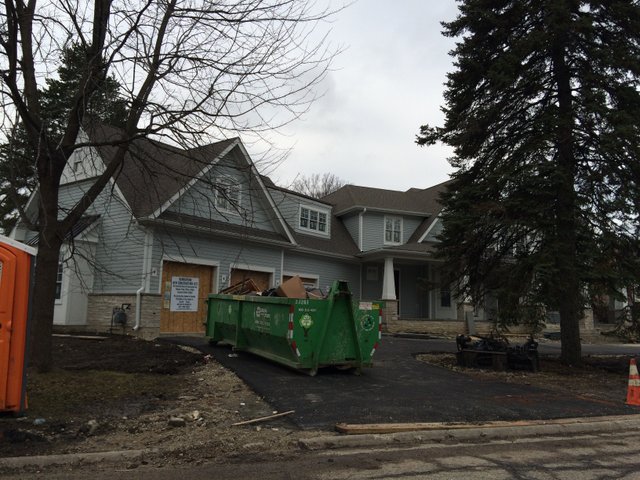 Nice-looking place, right? That’s typically the case with teardowns: a newer home in an otherwise older, established neighborhood. Typically the buyer replaces the old home with a new one because the old home lacks a certain je ne sais quoi: perhaps it was missing so many contemporary amenities that it would be more cost effective to start over; the house’s position on its lot may be disadvantageous; or (most likely) the homebuyer simply wants something bigger.

But why demolish a house and build anew, when it’s perfectly easy to buy a new plot of land and start from scratch? Again, the explanations vary: the buyers could prefer an older neighborhood with an established tree canopy, surrounded by homes with a certain patina; the location could be ideal for their work commute; or (most likely) the municipality is particularly desirable due to a high-performing school district, combined with a relative scarcity of undeveloped land.

The teardown phenomenon began, not surprisingly, in higher-cost, larger, mature cities. Usually it takes place in what one might call “second generation suburbs”—not the ones that directly abut the inner city (those suburbs are often struggling), nor the distant exurbs (there’s still plenty of cheaper vacant land). Instead, we witness teardowns in the suburbs that emerged long after the earliest decentralization initiatives: middle-class areas built in the 1950s, 60s, and 70s that have either remained middle-class or even become more affluent over time.   Hemmed in on all sides, and with strict zoning regulations prohibiting much upward expansion, these suburbs manifest their high demand through the teardown.

Chicago’s northern suburbs offer numerous examples. Here’s a streetscape in the suburb of Glenview, with a population around 45,000, a location 18 miles from the downtown Loop, and a median household income that hovers around $100,000. 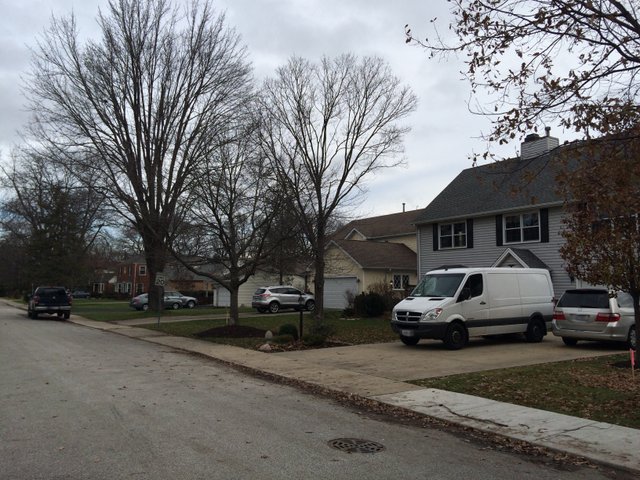 At first blush, nothing seems too striking about the neighborhood. But look further at individual houses, and the variety in size, age and architectural styles among the homes becomes much more obvious. 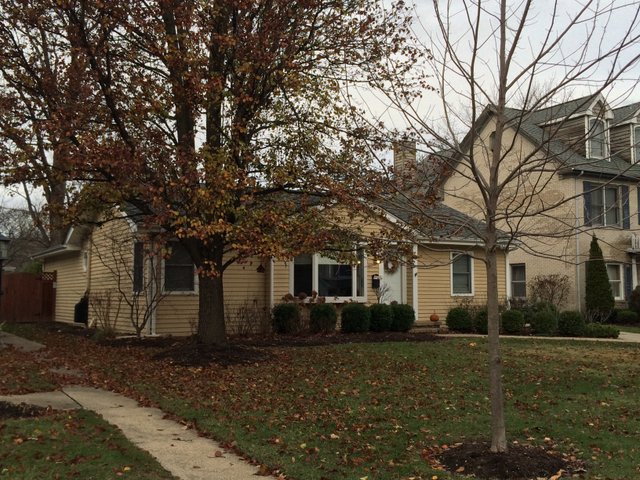 Take these two, for example: the modest bungalow on the left, and the much larger hybrid of federal/Georgian architecture to the right. What are the odds that the developer who conceived this subdivision had intended for two adjacent homes to look so radically different? Slim to none. 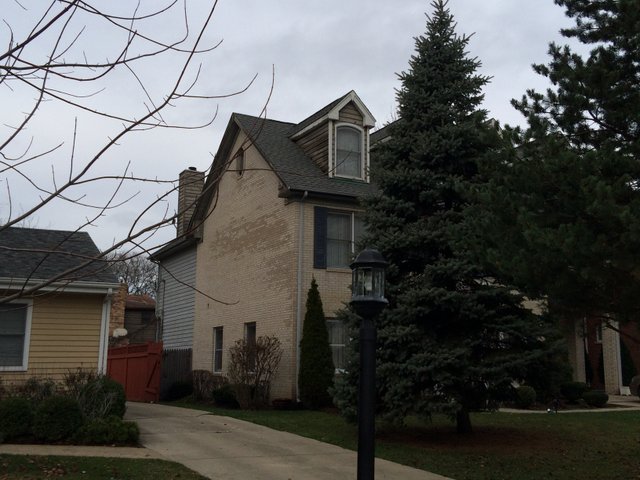 Even if this mature neighborhood consisted of custom-designed homes, it’s unlikely that the original builders would choose such divergent designs and sizes. The home on the right is likely more than twice the size of the one on the left. The most plausible outcome here is that the right-hand home is a teardown, with a much larger structure replacing the original—and the long-demolished predecessor looking much more akin to the yellow home on the left. In fact, it appears that the bigger home might comprise both a teardown and a further extension, judging from the wooden protrusion in the back. 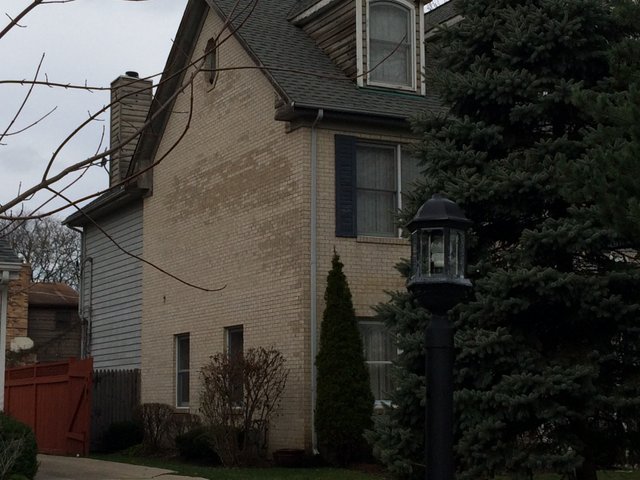 But, since these homes sit on very modest lots (my guess about one-sixth of an acre), the teardowns don’t have much room to grow on the sides, resulting in small front yards, tiny back yards, and, in this case, nothing more than a carport instead of a garage. 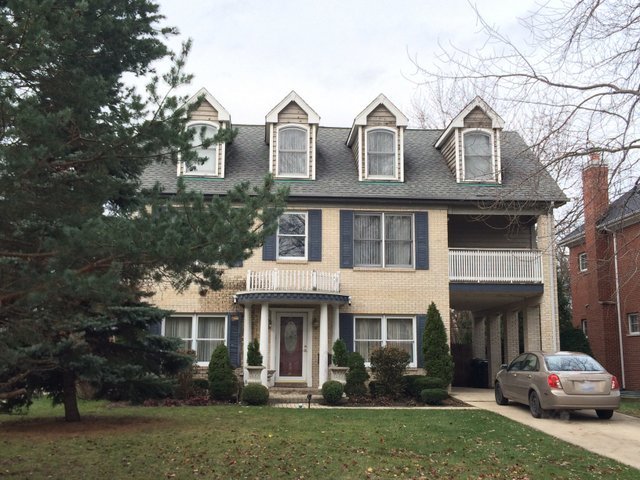 These landscapes abound in Glenview. Just a bit further on the same street, we see less subtle evidence of teardowns. 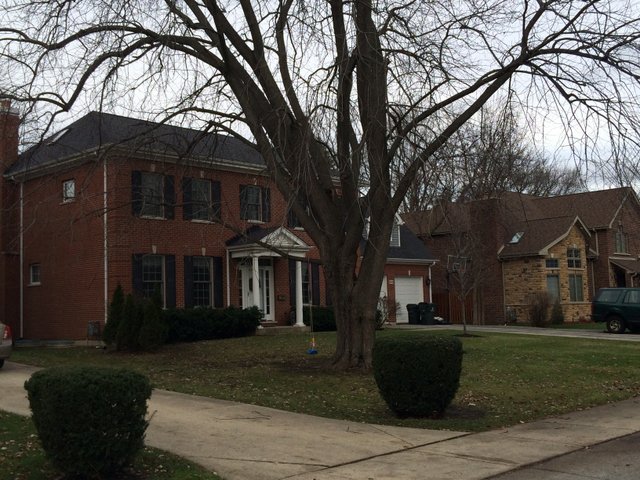 The home on the right is unambiguously new construction. Just look at it. 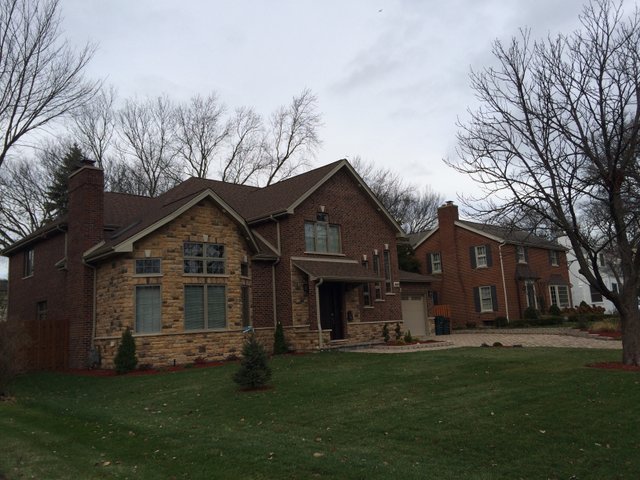 The prominent central gable, the keystones over the windows—the architectural language here dates from the 1980s at the oldest, and probably more recently. This street features so many teardowns, in fact, that the new construction is no longer a visual anomaly. With this many design/age/size aberrations, there is no true “typical home”, so nothing feels out of place. 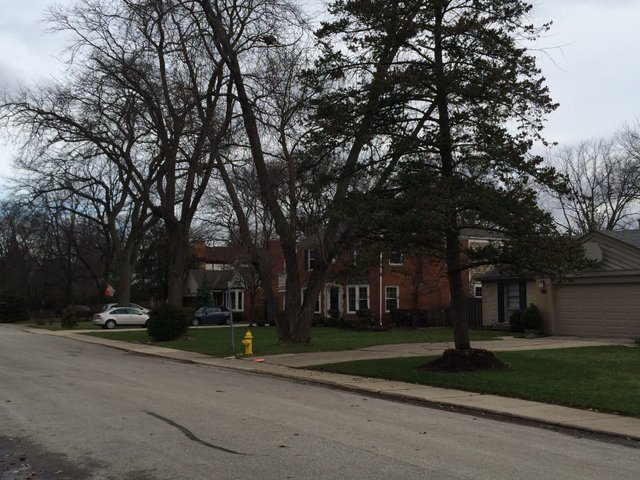 The mature trees and nearly identical lot sizes help instill a certain visual consistency that might otherwise be absent amidst such heavy redevelopment.

I concede that I have some advantage in my ability to judge this neighborhood, since I know some of the homeowners. And my inside scoop has revealed that probably around half of the homes are teardowns, while another quarter have undergone such significant alterations over the years (mostly expansions) that they are unrecognizable from the original form. The one-story yellow house featured previously and this bungalow may come closest to the original spirit of the housing style: 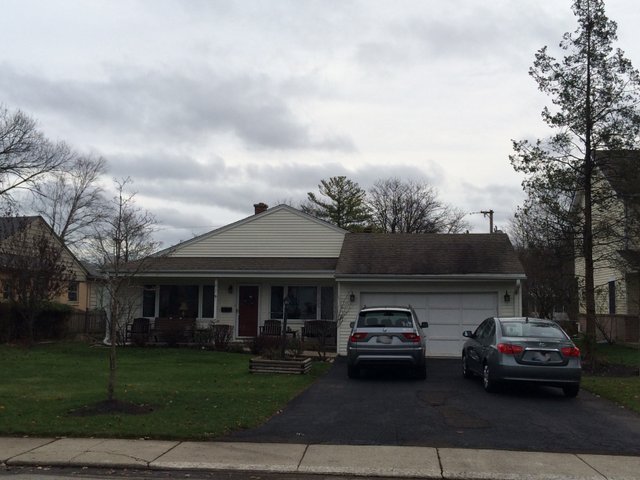 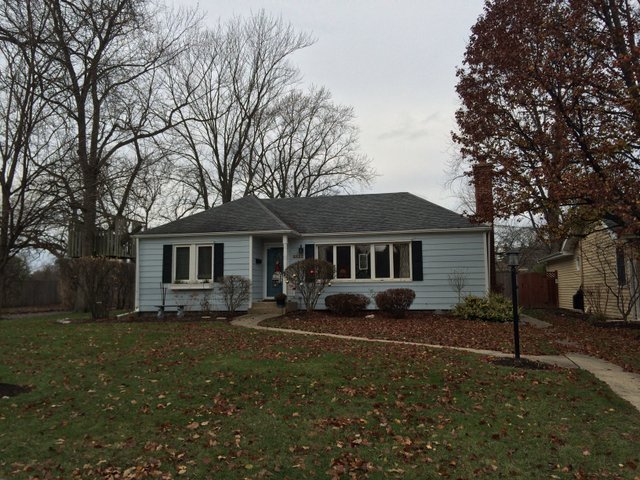 Many of the original homes were simple two-bedroom cottages with a single bathroom, which would be rare to find in any new construction of single-family detached housing in the Midwest. Households today simple want bigger homes, usually with—at a minimum—three bedrooms or two beds and a flex room, along with at least one and a half baths.

Elsewhere in the neighborhood, the teardowns are again more obvious, because the scale and features contrast so sharply with the neighbors. 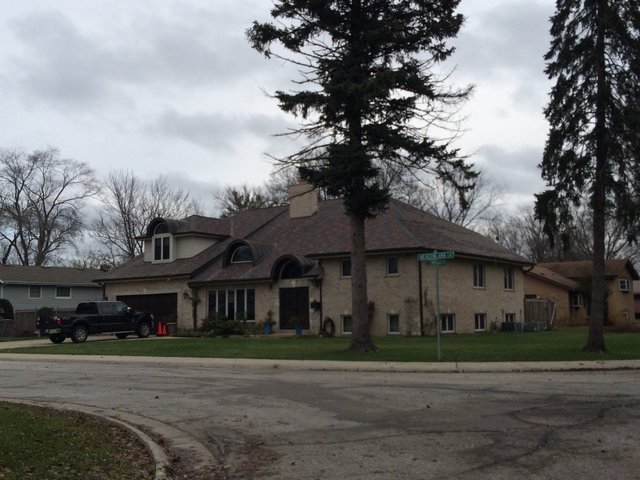 Again, the home above clearly dates from the last twenty years, while the tri-levels just a bit further down the street bear the unmistakable mark of the 1960s and 70s. 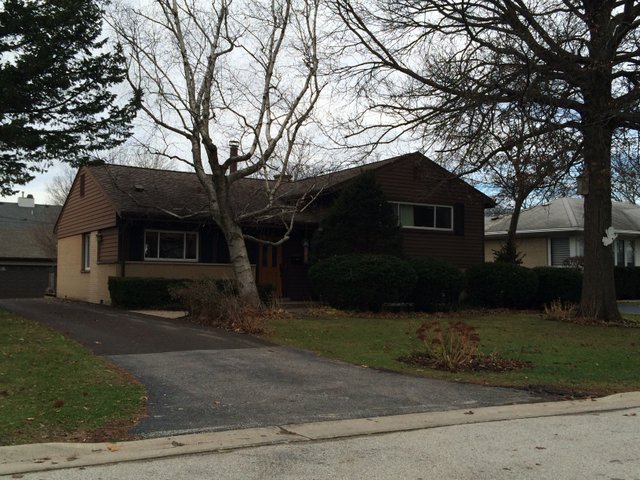 Some of the teardowns may actually be quite old themselves, doubling the size of the original homes, but with aesthetics more characteristic of the 70s and early 80s than something more contemporary. 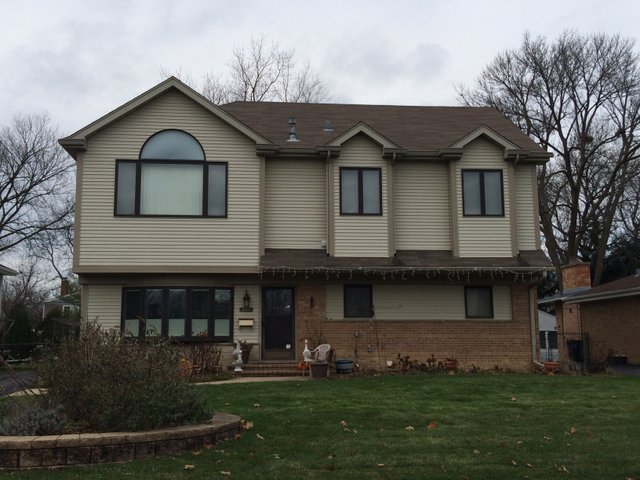 And a more modest, comparatively “untouched” design comprises about every third home. 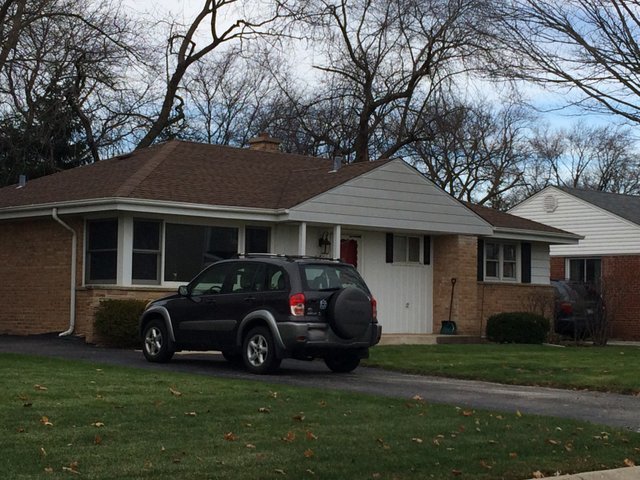 But my favorites are what my friends have labeled the “Frankenstein homes”—those consisting of multiple expansions over various time periods, like this one: 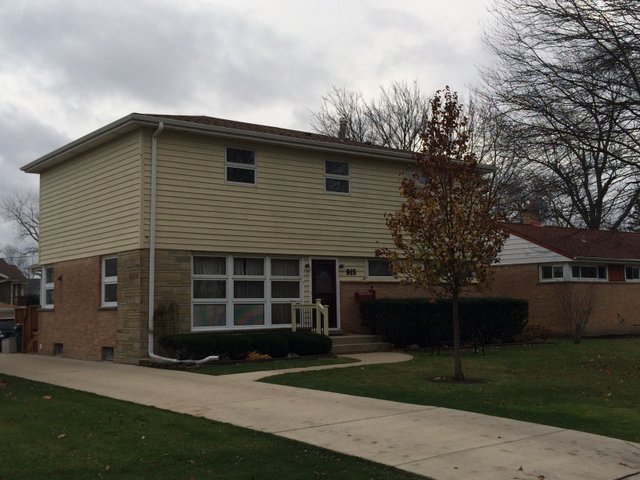 Look at the first floor, and then compare the fenestration and design to its immediate neighbor to the left. 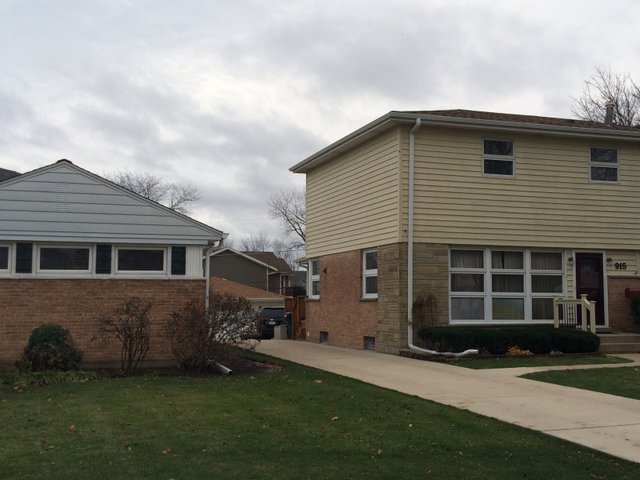 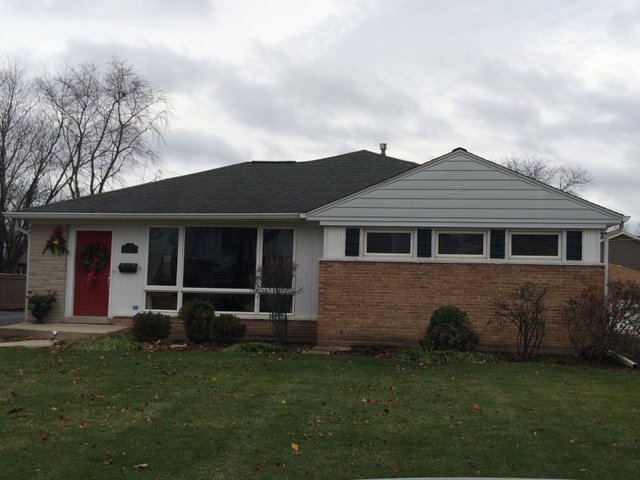 My guess is the entire second floor was a later expansion.

The prevalence of teardowns is a testament to Glenview’s enduring desirability as a bedroom community. Whether it’s the convenient location in the middle of northern Chicagoland, the top-ranked school system, the diversity of housing types, a reasonably walkable environment with a discernible downtown, commuter rail access…you name it. Glenview has enough to recommend it that people with considerable economic means have decided not to push further outward. Instead, they build their dreamhomes right there in Glenview—after they’ve bulldozed the one that stood there previously, even though the former home was probably in perfectly livable condition. Whatever one thinks of the ecological underpinnings of this real estate decision, it serves as one of the most unambiguous indicators of a community’s attractiveness. We could easily carp on the aesthetics when a single teardown deviates sharply from everything around it, but teardowns rarely occur in isolation. And, as the evidence in these Glenview subdivisions confirm, over time it’s not much different than the incremental replacement of a wardrobe in a closet. Let’s just hope the replacement clothes aren’t getting continuously bigger and bulkier…though—let’s face it—in this country, they often are.

PrevTurning up the heat by removing the kitchen.
Biblical Flooding on a Biblical Floodplain, Part I – The recipe for natural disaster.Next

12 thoughts on “MONTAGE: Teardowns: cleaning out the residential wardrobe.  ”