Circle Centre Mall’s silver anniversary: can we scrape away the tarnish?

I was recently quoted in an Indianapolis Monthly article celebrating the 25th anniversary of downtown’s Circle Centre Mall.  As anyone who has visited recently can attest, there’s not a great deal to celebrate at this point.  I’ll concede that my last visit was in early 2017, shortly before the closure of Carson’s (at that point the only department store), and my last extensive photographic visit was in 2013, nearly three years after the closure of Nordstrom, even then showing the telltale signs of a mall in decline. 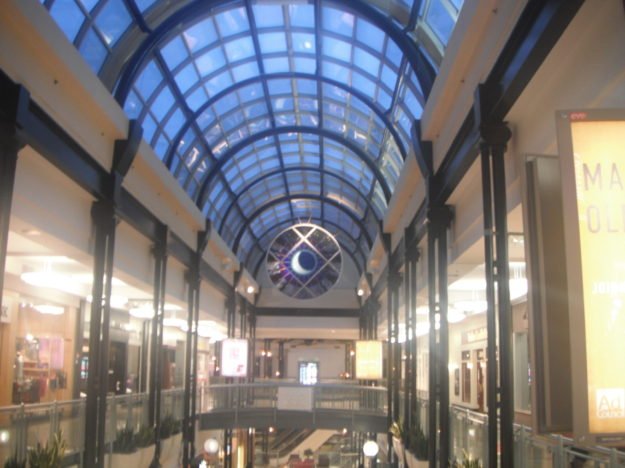 But both of those visits preceded the closure of Carson’s, a departure that transpired largely in tandem with the failure of the parent company, The Bon-Ton Stores, Inc., a major department store chain across the Northeast and Midwest, whose brands included Carson’s (Carson Pirie Scott), Elder-Beerman, Herberger’s, Younkers, among others.  And after that closure (leaving Circle Centre with zero department stores), Indianapolis Monthly asked me to write an article contemplating the repurposing of the downtown’s largest concentration of retail space.  We knew back then that the mall was in trouble.  But those visits and that article preceded the devastating impact of COVID-19 in 2020–a pandemic that prompted lockdowns, which resulted in a near complete absence of routine commercial activity in Indianapolis and most other American urban centers–followed by the property damage caused by the early summer riots (also a phenomenon replicated across most large-scale American downtowns).

The widespread recovery of the Mile Square in Indianapolis from this ruthless one-two punch remains to be seen.  The downtown is still stumbling and lurching, with high-profile restaurant closures announced alongside new openings.  But it’s hard to be sanguine in the least regarding Circle Centre Mall.  This most recent Monthly article from September 2020 suggests that the sluggish negotiations and economic vicissitudes of the late 80s slowed the development of Circle Centre to the point that its 1995 grand opening achieved less fanfare than it otherwise wood, since, by that time “the indoor mall boom was over.”  There may be some truth to this–a downtown mall was certainly not a novelty in 1995–but malls remained the overwhelmingly preferred shopping typology for most Americans (e-commerce was in its infancy), and Circle Centre Mall enjoyed 15 years of success: not a large time frame, but better than some malls, and the fact that it’s not completely shuttered is a huge contrast from the urban malls in most of Indy’s similarly sized Midwestern peers.  Furthermore, the first floor, street-level space (which suffered lagging occupancy in the early years) has consistently hosted restaurants and nightclubs that, at least prior to COVID, commanded high enough rents to lure lucrative, nationally known brands.

But the street-level retail has become increasingly detached from the Circle Centre Mall itself, owing its success more to visibility along major corridors such as Pennsylvania Street and Meridian Street, rather than the magnetism of the mall.  And the malls tenants are growing increasingly “unconventional”: less oriented toward clothing, fashion, or other retail, and more on entertainment (bumper cars, glow golf) and services (a high school).  And this is what my comment to the Monthly article explores: at least for the time being, the mall’s management (for which parent Simon Property Group, whose headquarters are just a few blocks away, has at least some supervisory role) most focus on creative short-term leases, pop-ups, and other non-traditional approaches, most likely those that can easily foster social distancing in the continued aftermath of COVID.  I remain optimistic that, with the expertise and leadership at the helm of a well-run company like Simon that is fully aware of the paradigmatic shifts, we will see positive advancement, even if (for a time) things get worse before they get better.  I look forward to other perspectives on the topic.

PrevChanges afoot at American Dirt.
A casino in Laguna Pueblo keeps the slots spinning, but with an unusual gatekeeping strategy.Next

13 thoughts on “Circle Centre Mall’s silver anniversary: can we scrape away the tarnish?”