A casino in Laguna Pueblo keeps the slots spinning, but with an unusual gatekeeping strategy.

On a sun-drenched stretch of I-40 in New Mexico, conveniently situated between nowhere and Purgatory (but not the ski resort outside Durango—that’s in Colorado, silly), the weary motorist who can’t quite make it to Albuquerque might find this massive casino complex a welcome reprieve. 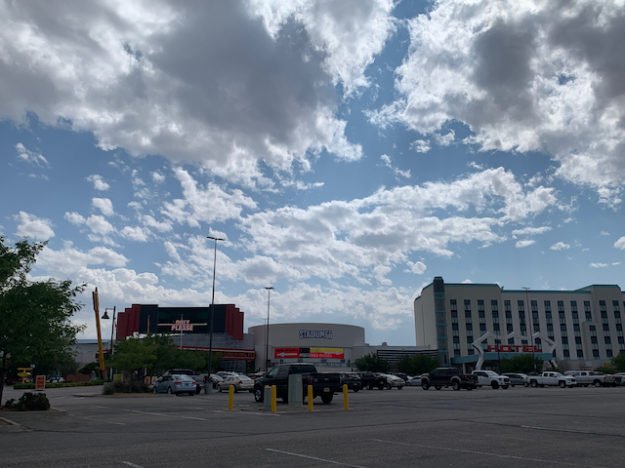 It’s the Route 66 Casino Hotel, one of numerous gaming facilities in the New Mexico, nearly all of which share the common feature of tribal affiliation.  (At this point in 2020, the only other type of gaming facility legally permitted in the Land of Enchantment are racinos, which are nearly always in an urbanized area.)  Like many casinos in the sparsely populated rural West, Route 66 also features a truck stop with gas and an RV park.   The contractual relation between gaming statutes and Native American tribes tends to vary intricately from state to state, but the Laguna Pueblo, under which Route 66 Casino Hotel is affiliated, is a census-designated place (CDP) with reservation boundaries recognized under the auspices of the Bureau of Indian Affairs.  The boundaries do not appear as stringently articulated as those in, for example, South Dakota; the Laguna Pueblo loosely stretches across 500,000 acres to encompass six villages: Laguna, Mesita, Paguate, Seama, Paraje, and Encinal, each village aligning with old Spanish missions after which they are named.  Interstate 40 bisects these lands; the villages are all less than five miles from the state’s largest east-west limited access highway.

I’ve had considerable difficulty finding an official map to Laguna Pueblo.  The official website for the pueblo reveals a great deal of critical information, but it does not depict its territorial holdings.  This map at least shows the highly irregular boundaries in relation to New Mexico counties, but it is difficult to make sense of it in relation to chief highways leading to Albuquerque.  The Google Map is a so-so approximation: 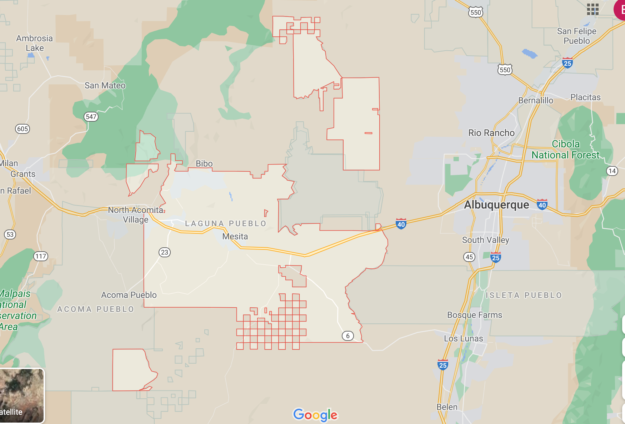 Using these tools as a baseline, I can only conclude that there’s greater flexibility in the site selection for a casino, thanks to the fact that Interstate 40 largely bisects the lands.  Route 66 Casino Hotel chose its location with a goal of balancing proximity to a good client base—metro Albuquerque, containing about half the state’s population, is a 30 minute drive away—and serving the local Laguna population.

Typical of these rural casinos, Route 66 manages to deploy smart, eye-catching iconography within its logo and signage, broadly reflecting the 50s mid-century modern ethos reflective of when travel along “the Mother Road” was at its peak.  It’s impossible not to associate Route 66 with the 50s because it’s the decade that predates most of the Dwight D. Eisenhower National System of Interstate and Defense Highways, which appropriated much of the Route 66 right-of-way for the requisite concatenation of limited access highways linking Chicago to Los Angeles.  And while the Interstate Highway System is certainly more efficient than Route 66 at traversing two-thirds of the vast nation’s land area, it has nowhere near the personality or local curiosity.  But the midcentury modern flourishes on this sign at the casino certainly evoke the iconography that the passage of time has largely interred. 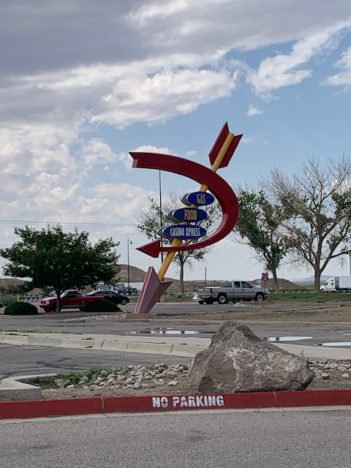 Throughout most of New Mexico, the limited access Interstate 40 has subsumed this historic path of Route 66, with the exception of the urbanized area of Albuquerque, where Historic Route 66 is Central Avenue, a primary east-west arterial.  Compare this to the Route 66 portion in Kansas, where the tiny fragment of the classic Mother Road passes through the southeast corner town of Baxter Springs, which still offers many 50s-era relics along its main street to accentuate the tourist appeal.  My linked blog exploring this Kansas town of 4,000 people shows how replete the old Route 66 corridor is with nostalgic references, all the more important since the closest interstate (I-44, about four miles to the southeast) essentially bypasses the entire town, when the old Route 66 traversed right through it.

Returning to New Mexico and the Laguna Pueblo reservation, it’s no surprise that most of the Route 66 corridor outside of Albuquerque is bereft of such whimsical pop-culture references; it’s most just I-40.  Ho hum.  Which makes this particular highway oasis such a welcome reprieve.  It even features the elaborate promotional light displays, at least vaguely evocative of Rat Pack-era Las Vegas, and no doubt essential at catching the eye amidst the tenebrous rural desert at night, or even the uninhabited daytime monotony. A closer look at those Vegas-style marquees to the Route 66 Casino Hotel reveals the conditions facing the region amidst this pandemic. 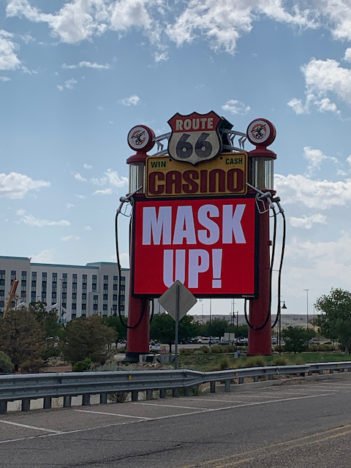 However, the signage these days is just as much promotional as informational.  And this particular casino in the heart of the Laguna Pueblo has chosen an unusual approach in attempting to preclude the spread of COVID-19. 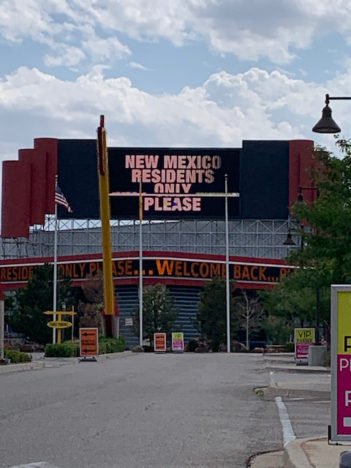 That’s right: among the many precautions, this casino is currently only open to New Mexico residents.  According to the Route 66 website, an identification check (presumably a drivers license) will help confirm residency.  This security protocol aligns with the March executive order from New Mexico Governor Michelle Lujan Grisham requiring quarantines from out-of-state residents or those returning to New Mexico.  Here’s a sign travelers encounter at the Albuquerque International Sunport (ABQ) shortly after arriving at the terminal. 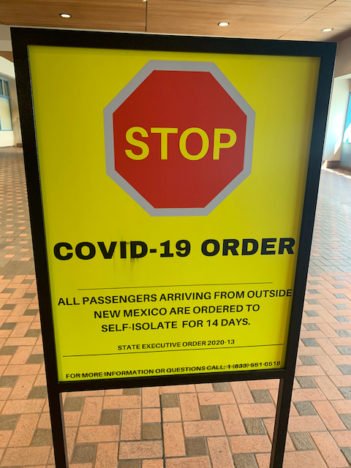 Meanwhile, more recent September restrictions apply nuanced distinctions between high and low-risk states, mandating a 14-day self-quarantine to those arriving from states deemed high-risk at the time, in terms of daily caseloads.

I do not believe that the State is strictly enforcing these quarantines.  I did not arrive from a high-risk state when I flew into New Mexico, and I saw no personnel imposing the quarantine or even a temperature check at ABQ.  However, I have firsthand evidence that Laguna Pueblo is enforcing travel restrictions, not only from this decree by the Laguna Pueblo Governor Wilfred Herrera, Jr., but from firsthand experience: the relatively few roads bisecting the Laguna Pueblo territory (outside of the limited access I-40) have state troopers parked in the road, blocking any access outside of Pueblo residents.

These safety precautions in New Mexico have achieved national attention and a fair bit of controversy, leading to questions of the constitutionality of applying police power to restrict freedom of movement across jurisdictions, particularly because these barriers effectively impede the western New Mexico city of Gallup (population 21,000) from travel in three directions, due to the presence of various reservations.  During much of the pandemic, Gallup has had limited access to travel eastward toward Albuquerque along I-40, but the ability to leave the interstate and use local roads remains extremely limited, again due to the presence of Laguna Pueblo and neighboring reservations.  Those questioning this use of emergency police power have ascribed much of the blame (perhaps inaccurately) to Governor Lujan Grisham.  Though her policies during COVID are undeniably among the more draconian among state governors, the restrictions at Laguna Pueblo under reservation governor Herrera are even more stringent.  But the justification for such measures comes from the disproportionately high case load among Native Americans from COVID: in New Mexico, their infection rate has measured up to ten times that of the rest of the population.

Bearing this in mind, the Route 66 Casino Hotel seems to have found a reasonable compromise.  Among the reservation-based casinos I saw in New Mexico (typically along major highways or interstates), most were closed.  Route 66’s stringent standards, though almost definitely a severe blow to its revenue, at least give it a fighting chance of remaining in operation and serving as a place of employment for residents in the area.  And, whatever questions one may want to ask about the social concerns that emerge from gaming, at least this allows some commerce to take place in a sparse and socioeconomically alienated corner of this large southwestern state, keeping those marquees lit and the retro flourishes squeaky clean.  Even amidst a pandemic, the weary desert traveler needs an oasis.

PrevCircle Centre Mall’s silver anniversary: can we scrape away the tarnish?
Mid-block traffic management: what’s behind those seemingly pointless stop lights in Denver?Next

2 thoughts on “A casino in Laguna Pueblo keeps the slots spinning, but with an unusual gatekeeping strategy.”