Regal Cinemas closes in Alexandria: a casualty of corona or a sign of bigger things to come?

As the American public attempts to reconcile a steadily rising COVID-19 caseload with increasingly diffuse reports on the means to combat the scourge—peppered by occasional reports that many other countries are now also reporting a rise in cases—it is clear that most businesses cannot sustain the draconian conditions imposed by the spring lockdowns.  And, with few exceptions, they are back up and running, albeit under considerably reduced conditions: shorter operating hours, fewer tables, half-depleted shelves, diminished services.  These constraints are devastating to a business’s capitalization, and it should come as no surprise that the unemployment rate, though not at its devastating peak in May, remains alarmingly high.  Most businesses simply cannot justify keeping as many workers employed while operating a fraction of the capacity as before, and, given the pervasive fear among much of the American public, it’s likely that these businesses could never justify operating under normal conditions because they wouldn’t likely get the patronage.

However, amidst the lingering uncertainty, some businesses have decided to close altogether.  In my home city of Indianapolis, a long-beloved Belgian restaurant, Brugge Brasserie, attempted to make a go of it during the early stages of the COVID lockdown, but ultimately decided it wasn’t going to work.  Though the owners hold out hopes of re-opening at some point in the future, they simply couldn’t operate Brugge profitably under carry-out only conditions.  I learned more recently that a Belgian restaurant near me here in DC with a similar menu, Granville Moore’s, has also reinvented itself into an Italian eatery, using a cash infusion through the Paycheck Protection Program and a micro grant from the City itself, which allowed it to shift its inventory and cooking paraphernalia to support primarily pasta dishes.  The painful reality for both Brugge and Granville Moore’s is that mussels, the staple of Belgian cuisine, does not translate well to a carryout interface.  Other niche businesses face a similar obstacle: while bars often boast higher-than-average profit margins and can thrive during the ease of the lockdown (as, it seems, can the virus itself), sports bars depend heavily on their abundant walls of televisions to broadcast live games, most of which are taking place at a fraction of their normal rate.  And, since most sports bars also offer food (albeit mediocre concession-style food), they’ve faced the same structural barriers as Belgian restaurants.  If sports don’t rebound this fall, I suspect many sports bars won’t be able to make it.

Then there’s another variant on the entertainment industry whose capacity to recover remains in considerable doubt. 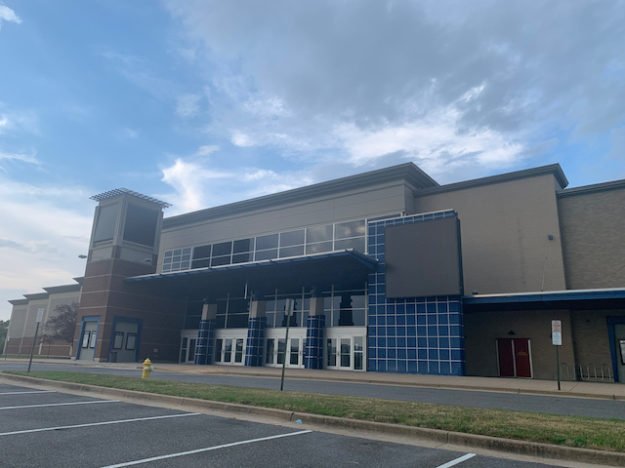 Movie theater chains are already notorious for operating under highly leveraged conditions, still attempting to reassert their dominance after numerous mergers and acquisitions in the last decade, in part a response to the growing competitiveness of movie streaming services within people’s increasingly sophisticated home entertainment systems on their supremely comfy recliners.  Most of the big-name companies incurred considerable debt as they installed more luxuriant furnishings, state-of-the-art sound systems, and a streamlined ticket purchasing process that allowed them to reduce staff.  But, in a fragmented landscape where different states are imposing varying levels of capacity limitations (which is particularly crippling during the normally highly profitable summer blockbuster season), many companies are acknowledging that, if things don’t return to normal by late fall, the average multiplex may become an endangered species.  The example in these photos already decided to throw in the towel. 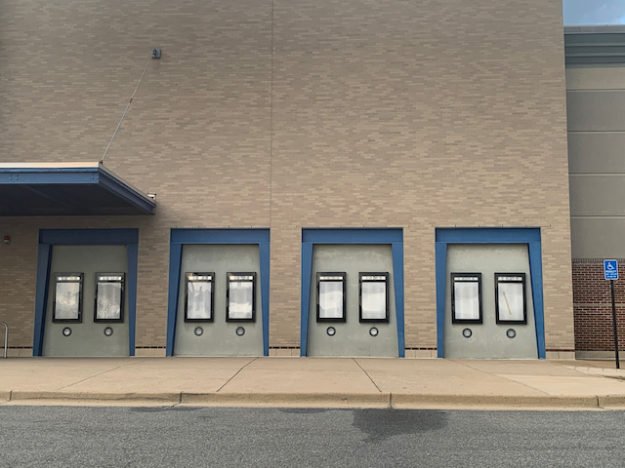 It’s a Regal Cinemas location at Potomac Yard in Alexandria, Virginia.  It was still fully operational prior to the pandemic; I saw a movie there last December.  I pass this location routinely, and at first it simply appeared temporarily closed, then it began to look almost mothballed, but now the corporate offices have unequivocally pulled out of this location.  All signage is missing.  Regal Cinemas will not return to Alexandria.

Unless some of the architectural and ornamental details are part of the brand, nothing here indicates that this was ever part of the Regal Cinemas franchise.  Given the dire state of the industry, it would be probable that a facility like this would struggle to find another corporate franchise willing to lease the structure housing the sixteen screens.  Movie theaters are a distinct configuration, difficult to repurpose, especially the multiplexes.  The standalone theaters of yesteryear, often only one or two screens off of a commercial main street, may struggle from lack of easy parking, but they are far easier to repurpose into an all-purposes auditorium.  But how often is there a need for sixteen auditoriums clustered together?  This Regal Cinemas location at Potomac, though clean, was clearly showing its age: worn carpet, poorly restocked restrooms, visible damage to the walls.  The seating in the theaters would pass muster in the late 90s and early 2000s (when it was built) but certainly wasn’t on par with the La-Z-Boy recliners common to many first-run theaters today.  Quite simply, the evidence was there back in December that this was not a top-tier location.

And, exploring the abandoned theater grounds a bit further, it begins to make sense. 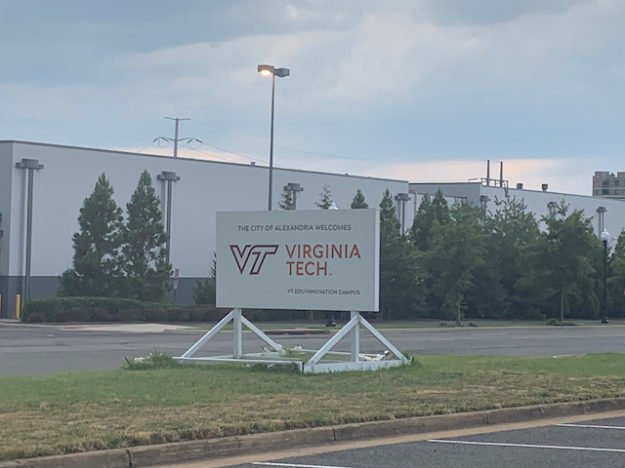 The owners of the theater property decided to close up shop at the onset of COVID-19.  No point in wrestling with long-term uncertainty if the outdated theater building is sitting on hot real estate.  But was the transition to a Virginia Tech extension campus really that seamless, or had developers been plotting all along?

Some additional context on the area is critical.  The theater is part of a much larger multi-decade redevelopment project called Potomac Yard Center, a large regional shopping shopping center on the former site of a massive rail yard that closed in the 1980s, leaving an enormous brownfield in an otherwise prime location, less than a mile south of Reagan International Airport (DCA) and the huge office complex known as Crystal City.  Multiple development interests partnered in the cleanup of this Superfund site throughout the 90s, facilitating the completion of the automobile oriented Potomac Yard Center in 1997, as well as the adjacent Regal Cinemas movie theater (originally the Australian chain Hoyt’s, now defunct in the US).  Subsequent development on the remaining Potomac Yard lands includes a variety of multifamily housing: apartments, townhomes, and a few more pedestrian scaled shops scattered here and there.  And the development continues to the present.

By 2020 standards, the eminently suburban configuration of this movie theater and the Potomac Yard Center seem passé and unsuited to walkable character of the newer multifamily housing, or the high-rises of Crystal City just to the north.  But, at least until recently, Potomac Yard Center seemed to benefit from the high density of people with considerably spending power who lived in the surrounding communities.  I blogged just two years ago about the power center’s popularity, even in the face of a retail apocalypse and the increasing perception that bricks-and-mortar shopping centers were steadily losing ground to e-commerce.  Potomac Yard Center seemed to buck the trend, boasting near-perfect occupancy.

But amidst an industry as turbulent as retail, a lot can change in just two years. 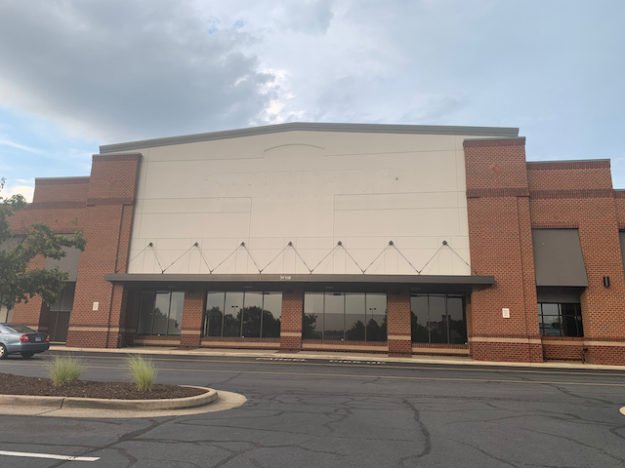 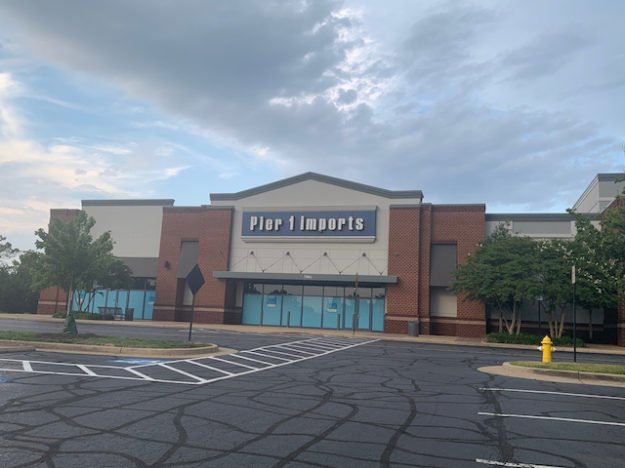 In that time, the Potomac Yard Center bade farewell to Shoppers, Thomasville Furniture, an outparcel restaurant called Hops, and Pier One Imports recently announced complete closure of all stores, after filing Chapter 11 at the beginning of the year.  New York and Company is about to follow suit.  Not a single of these shuttered businesses has a replacement lined up, giving Potomac Yard Center what I’d wager is at least a 15% vacancy rate (in terms of gross leasable space)…making it much more typical of the average shopping center in this day and age. 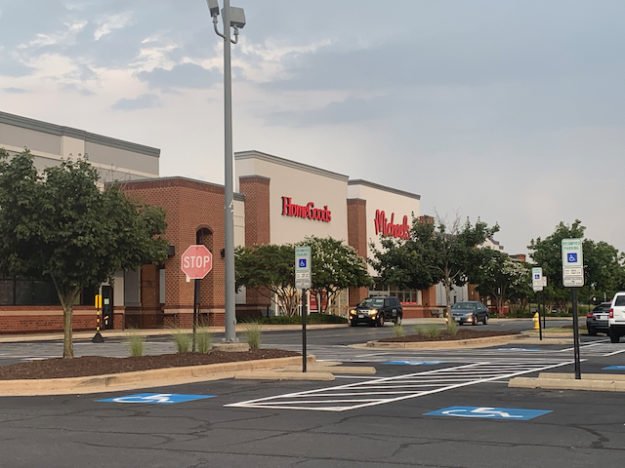 The continued decline in bricks-and-mortar retail, exacerbated by the pandemic, no doubt buttressed the case for closing the Regal Cinemas location just down the street.  But that large sign at the edge of the property, promising a forthcoming Virginia Tech Innovation Campus, suggests that the idea was percolating long before anyone conceived that a viral threat originating in Wuhan Province might detour the trajectory of the global economy in first quarter 2020.  And an article from late 2019 in the Washington Business Journal (no doubt one among many) confirms it: an developer and its equity partners are redeveloping the theater site into a proposed 1.9 million square feet of academic, office, retail, and residential space, with the Virginia Tech comprising three of the proposed nine buildings.  At nearly 19 acres in size, the parcel containing the now-shuttered Regal Cinemas facility is staggeringly large for a single use, especially given the land values in this portion of Alexandria just south of the border with Arlington County.  And those values are only slated to rise in the years ahead, considering that this Virginia Tech Innovation Campus is a fairly modest intervention in the grand scheme of things.  First of all, in the southern portion of the elliptical shaped parcel, Washington Metropolitan Area Transit Authority (WMATA) is working on a new Potomac Yard metro stop, since the blue and yellow lines already limn the eastern edge of the property.  With that additional stop (estimated completion in 2022), the demand for a higher intensity of uses—transit oriented development—will increase dramatically.  Secondly, the Amazon HQ 2.0, branded National Landing, is starting to break ground in Crystal City, just a hop skip and a jump across Four Mile Run, the creek that separates Arlington from Alexandria, ushering in a tremendous growth in jobs that pay salaries fully justifying some big-ticket housing nearby.

Quite simply, the Regal Cinemas at Potomac Yard was a suitable redevelopment paradigm in the 1990s, when the risk of such radical transformation of an old brownfield site was greater.  Why not make it suburban in scale, with a multiplex surrounded by a vast parking lot?  That’s no longer appropriate in an era where the public increasingly prefers urban streetscapes, high density housing, and the live-work dichotomy resolved through a simple walk.  But this begs the question: what’s the future of the Potomac Yard Center just to the west, sprawled out across 40 more acres? 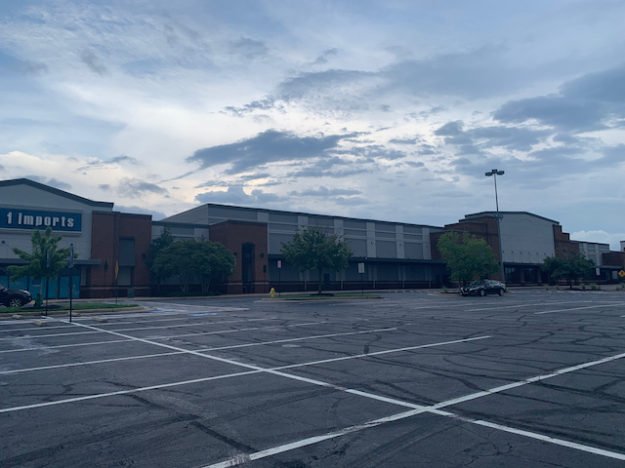 The Business Journal article I cited is coy, but it does reference Regal Cinemas as “the first phase of the redevelopment”, and other articles on the subject have hinted about a planned reinvention of the equally suburban panoply of big box stores.  Bear in mind, as recently as 2018 I assessed the Potomac Yard Center as a successful standout, thanks to the concentration of well-run and resilient companies like Target, Best Buy, and T.J. Maxx, but it has suffered staggering vacancies in the last year, which are likely only to grow as retail’s retraction continues.  Is a suburban shopping megaplex really the highest and best use of this land?  The exact severity of the closures remains as uncertain as the lingering effects of COVID-19, but if the trajectory is anything like what we expect it to be, there’s no question that a deep-pocketed developer will drool over the opportunity to acquire the property and chop up at least a portion of those yawning parking lots, transforming them to more office mid-rises, among other things.  And, rather than suffering from months or years with “For Sale” signs perched in the corners, it may transition as smoothly as Regal Cinemas, handing the baton from a certain big business interest to an even bigger one.  So long as the baton remains sterilized and COVID-free.

16 thoughts on “Regal Cinemas closes in Alexandria: a casualty of corona or a sign of bigger things to come?”