I’ve spent multiple blog articles praising the colorful initiatives of Mural Arts Philadelphia in the past—including a very recent article—but it occurred to me that precious few of these articles have actually depicted the City-funded initiative in its full form.  Up to this point, I have compared Philly’s influence on mural programs in other cities, or I’ve shown grassroots initiatives in Philly, not under the auspices of Mural Arts Philadelphia (formerly the Mural Arts Program), usually at a smaller scale and (let’s admit it) a lower skill level.  Unfortunately, my repository of photos featuring actual, City-sanctioned murals in Philly is meager.  Having lived in the city for a time, I just became so accustomed to them that I rarely thought to snap photos.  But, looking through my tens of thousands of photographs from the past ten years (or more), I was able to fish out a few good examples, like this one in the East Passyunk corridor in South Philly: 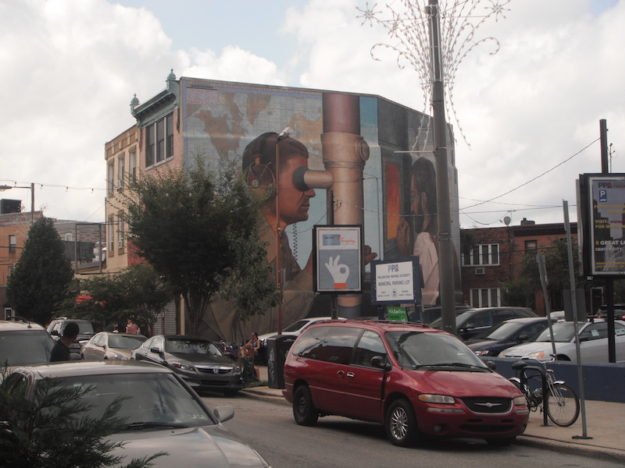 Within the same block is a blank side wall fronting a restaurant’s outdoor dining space—a site rife with opportunity for muralization. 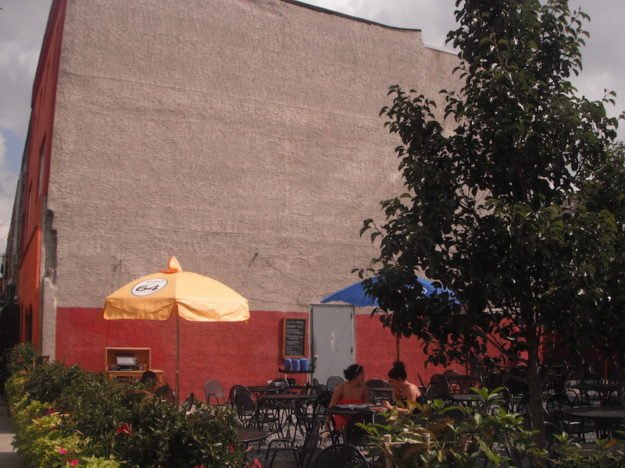 Since these photos are fairly old, the wall may boast a mural today…or a developer may have constructed some infill housing at the site in this rapidly gentrifying part of town.  Large parking lots in this finely-wrought neighborhood are rare (and diminishing), but here’s one where a pair of blank walls offer a near panorama of South Philadelphia from yesteryear. 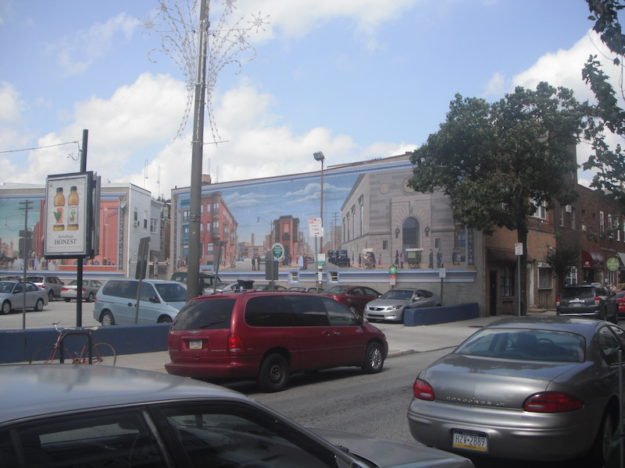 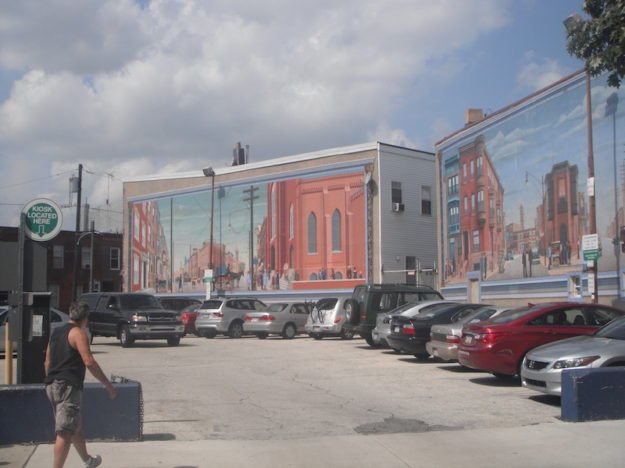 Digging through these photo archives helped me come to a bold conclusion: Philadelphia has what is likely the most robust public art culture anywhere in the country.  Mural Arts Philadelphia is merely the best funded of the sundry initiatives, but it alone puts Philadelphia at the front of the pack: while some murals from the past have faced demolition or concealment through new development, well over 2,000 of the nearly 4,000 commissioned murals survive, since local advocate Jane Golden founded the program in 1984; she continues to direct it.  And if we looked at public art from the other angle—removing the murals from the calculation and instead focusing on everything else—Philadelphia may very well still win the gold.  Among the other significant accomplishments: the scattered bricolage from long-term Philadelphian Isaiah Zagar, whose work predates Jane Golden’s efforts by about twenty years.  Here’s a snapshot of the mosaic he applies to otherwise mundane façades, again in South Philly. 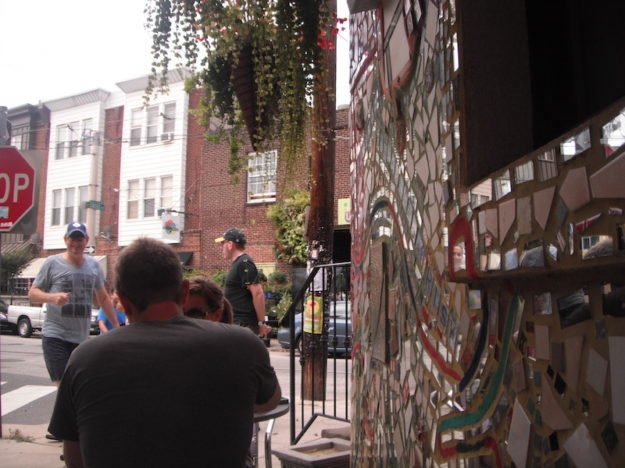 This is a relatively minor effort; I covered some of Zagar’s larger works in an old blog post, but his crowning achievement is Philadelphia’s Magic Gardens, a 3,000 square foot installation that serves both as Zagar’s center of operations and a showcase for other folk and art brut initiatives that Zagar and his supporters find meritorious.  While Jane Golden has ensured that the painted incarnations of Mural Arts Philadelphia are spread throughout much of the city’s expansive limits, Zagar’s work remains most heavily concentrated around South Street and the adjacent South Philly neighborhoods.

I understand that acknowledging Golden and Zagar alone isn’t enough to distinguish Philadelphia; most cities of a certain size have their unofficial artists laureate who have wedded their aesthetic language with their respective city’s identity.  Among the first that comes to mind is the late George Rodrigue of Lafayette, Louisiana, whose “blue dog” illustrated series positions his iconic dolorous azure canine in a variety of signature settings around the Louisiana’s Acadian region, ensuring he will always remain associated with it, even if his paintings appear in guest bedrooms of homes across the country (or the world).  Meanwhile, my home city of Indianapolis boasts the aesthetic stamp of autodidact architect Avriel Shull, whose distinctive approach to mid-century modern housing has assured her a place in the panoply of atomic-era architectural visionaries despite her lamentably brief career and life.  Neither Rodrigue nor Shull are household names (and Shull’s artistic corpus of single-family detached homes cannot ever enter the mass market the way a painting can), but they both serve as emissaries for their respective cities’ artistic life while enjoying a niche appeal beyond.

Returning to Philadelphia, I’d assert that the City of Brotherly Love earns this number one ranking not so much because of its local artist community or the fruit of their labor, but because it was so effective at harnessing public art as a tool for revitalization.  The mural initiative did not originate purely as a goal of stimulating the economy of certain neighborhoods; instead, it was intended to stymie criminal behavior reflective of the rising graffiti problem, in part by giving the most talented local artists (including some illicit graffiti artists) an sanctioned creative outlet.  To an extent, the city’s embrace of the Mural Arts Program reflected an application of the now broadly known Broken Windows Theory, since neglected areas are prone to suffer graffiti tags and smashed glass, and the two equally signal to ill-intentioned individuals of a locale where the inhabitants (often few in number) either overlook illegal activity or outright condone it.  Philadelphia was an optimal incubator for public art combating this pervasive image of neglect with one of stewardship and care, which was particularly necessary in the 1970s and 80s, when the city was reeling from continued population loss, escalating crime, abandoned structures, and rising numbers of vacant lots, which, thanks to the inordinately high percentage of attached housing (rowhouses) in this colonial city, resulted in a higher-than-usual number of blank side walls, left exposed where another structure had previously stood.

The activism of residents who stuck through the city’s darkest times could impel that culture of stewardship to metastasize to the indifferent onlookers nearby.  (Bear in mind that, even amidst the considerable population loss, Philly has remained one of the country’s most densely populated cities.)  As a result, Philadelphia benefitted not just from an apparent head start in deploying public art to revitalize (which means it has a higher concentration than most cities), but it pioneered some of the strategies that countless other communities have since appropriated.  Downtown parks and plazas have long served as the prime locus for statues and commemorative works, but only in the last quarter century or so have civic leaders determined that playful installations of pop-art or contemporary sculpture (all divorced from any historical or political importance) can both add intrigue to an otherwise drab landscape and continue to signal a level of care and investment that may in turn prompt private property owners nearby to shell out some money for beautification, improvements, repairs, or expansion.  This is Keynesian economics at its least controversial, and among the highest-profile initiatives is Philadelphia’s John F. Kennedy Plaza (better known as LOVE Park, at the southeast end of Benjamin Franklin Parkway, providing an uninterrupted line of sight that links the Philadelphia City Hall with Museum of Art.  This plaza, featuring a reproduction of the iconic Robert Indiana “LOVE” sculpture, among many other things, is hardly uncontroversial, in part because of the massive slum clearance borne out of the 1960s era Urban Renewal program that created both the LOVE Park and the massive Ben Franklin Parkway.  But the presence of massive, whimsical gaming pieces as sculptural installations in the adjacent Board Game Art Park–evoking chess, Monopoly, dominoes, and any board games that use the four-color signature “teardrop” marker—have helped add warmth and humor to an otherwise heavily paved, austere plaza (though apparently this public art is overdue for a renovation).

The familiarity of board game pieces and Robert Indiana’s LOVE—the ultimate pop symbol of hippiedom—help the installations serve as the earliest attempts at a middlebrow counterargument to self-important, elitist historical commemorations (themselves increasingly controversial for different reasons).  And Philly has these everywhere, whether it involves a facsimile of Rocky Balboa evoking his signature climb up the stairs of the Philadelphia Museum of Art, or this little pretzel in a lesser known part of town: 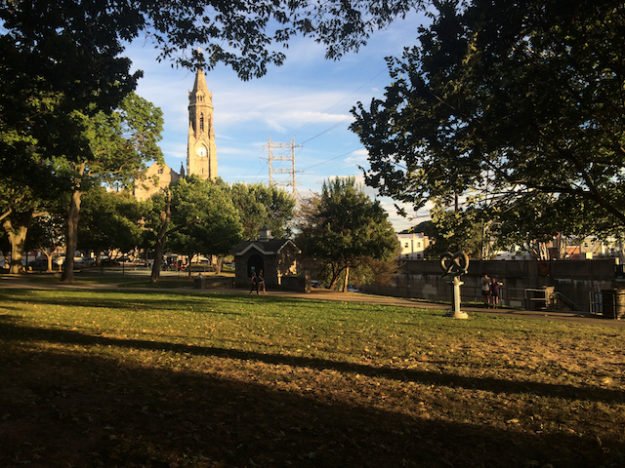 Surpassed only by cheesesteaks, the pretzel is Philadelphia’s second most famous culinary offering.  Obviously the city didn’t invent the snack, but it has a custom style and texture that has become increasingly visible other cities within the last two decades.  Incidentally, this piece of public art doesn’t really capture the Philly-style pretzel all that accurately; a true Philly pretzel has a much more “squashed” look,  with smaller holes amidst the knots.  Still, it’s an affable hat-tip to the local culture.

And the neighborhood park hosting this pretzel (Pretzel Park) is far removed from the prime tourist attractions. 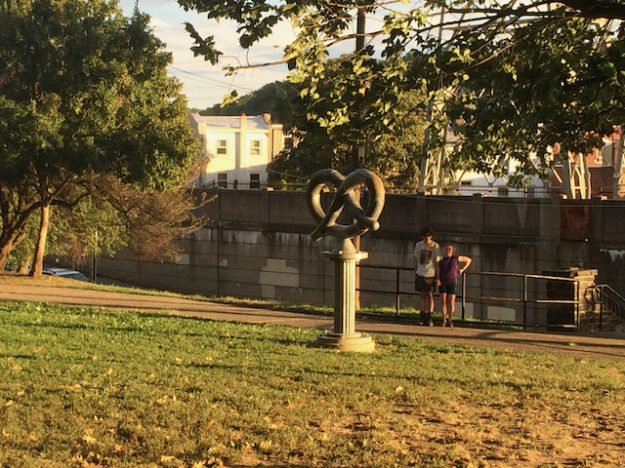 It’s in Manayunk, an outlying old mill community immediately adjacent to some of the city’s more affluent old suburbs.  Unlike much of the city, Manayunk never fully declined to dissolution; it remained a largely stable if unremarkable white working class enclave up through the 80s.  The perception of superior safety combined with an architecturally sound commercial corridor (Main Street Manayunk) helped transform the neighborhood into a bohemian, artsy outpost that suburbanites could feel secure enough to drive in and visit, even with Center City Philadelphia (downtown) was still largely in shambles. 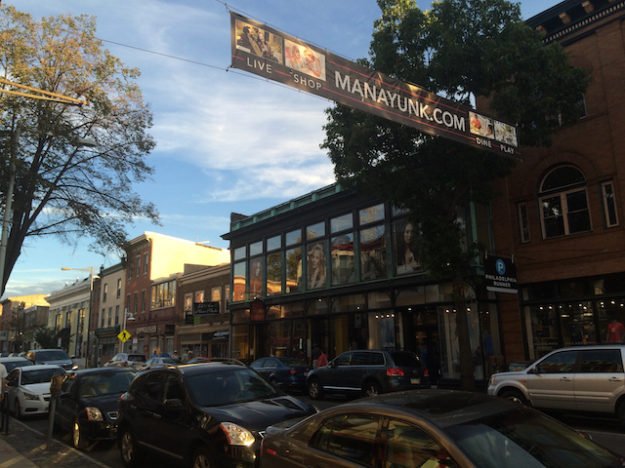 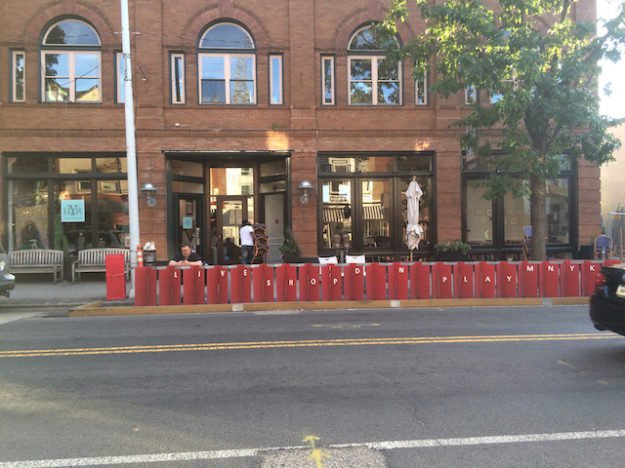 Manayunk today is less boho and more yuppie (or bourgeois bohemian), with quirky restaurants replacing the edgy art galleries, all attendant to this well-heeled population (as well as folks from elsewhere in the metro who come there to party).  Keeping in mind these socioeconomics, it would seem like a less-opportune place for Mural Arts Philadelphia to stake out territory: after all, the program typically targets neighborhoods with higher social alienation, property crime, and vacant lots left from demolished buildings, none of which Manayunk has suffered to any great extent.  Yet it still boasts at least one huge, elaborate mural at a prominent location just off of Main Street: 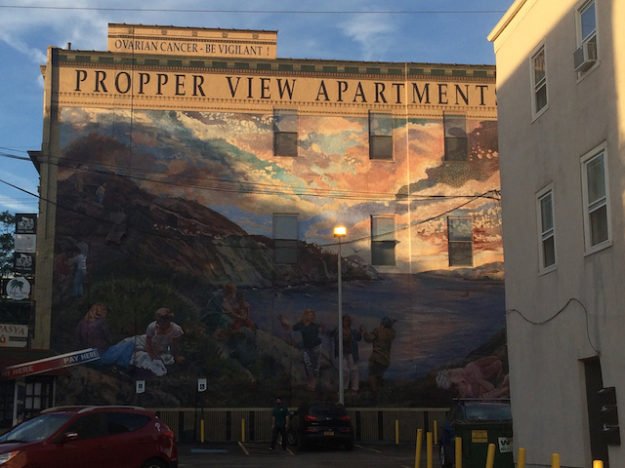 Truth be told, I’d be extremely surprised if Mural Arts Philadelphia had sanctioned this installation; if the name of the multi-family building that it adorns is in fact “Propper View Apartments”, then the idea of public art funding in support huge mural that serves as advertising would be a lawsuit waiting to happen.  Nonetheless, the financing entity for this Manayunk mural clearly elevated the project to both the magnitude and artistry of Jane Golden’s high standards.  My regret that the late afternoon umbral conditions render so much of the mural inscrutable.  But at least the creators managed to tack on a cheeky little message to what has to be an artificially grafted second cornice: 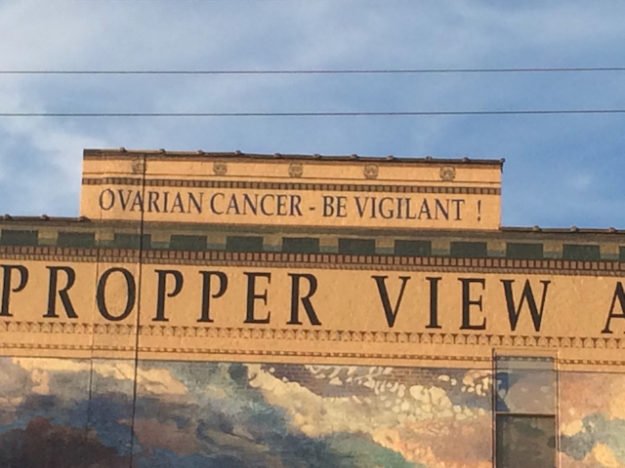 Just in case we hadn’t devoted the requisite fifteen minutes of worry today toward ovarian cancer, the folks at Propper View are there to remind us.  How brotherly, how loving of them!