Habitat 67: did Montreal’s mega-manifestation manage to make modular marvelous to the masses?

In April of 1967, the City of Montreal unveiled an unprecedented architectural showpiece, attendant to hosting the International and Universal Exposition, an event that most people referred by its catchier abbreviation “Expo 67”.   This spectacular feat in construction owes a great deal to tradition.  Starting with the the World’s Columbian Exposition (the Chicago World’s Fair of 1893), in which the “white city” envisioned by Daniel Burnham and Frederick Law Olmsted helped spur a short-lived but influential architectural and urban redevelopment initiative known as the City Beautiful Movement, most subsequent world’s fairs have depended upon some new edifice, not just to showcase the artistic innovation expected of a world’s fair but to endow the fair with enough of a wow factor to lure people hundreds or thousands of miles to visit the city.  Expo 67 was a chance for 1960s Montreal to reassert its historic position as Canada’s most prominent city and the biggest Francophone city after Paris—the former title of which was flagging, since Toronto had recently surpassed La Ville aux Cent Clochures as Canada’s biggest city, a demographic gap that has only widened over the ensuing years.

Municipal and national leadership pulled out all the stops for Expo 67, also Canada’s centennial year.  The resulting six-month event proved a tremendous success in terms of attendance, despite the fact that the signature pavilion was not yet complete at the start of the fair.  Even amidst the scaffolding, this architecturally distinct structure still hosted dignitaries and conveyed enough of original vision that it attracted considerable interest, easily finding a private buyer after completion and serving as a successful apartment co-op to this day.  What is the name of this mysterious wonder?  If the title didn’t give it away, design nerds undoubtedly know that which I’m referencing; it may prove a bit more elusive to anyone else outside of Canada.  Here it is from across the St. Lawrence River: 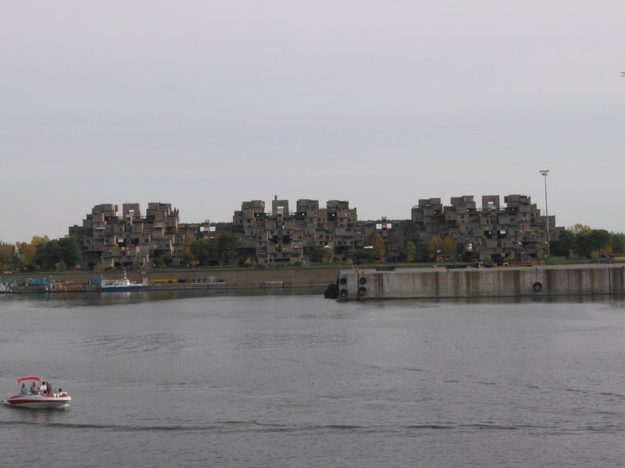 The name is in fact Habitat 67, and it comprises the vision of then-youthful architect Moshe Safdie, a variant on his thesis at McGill University.  As complex as it may appear to the untrained eye, the basis of its construction is disarmingly simple: nothing more than mass-produced, pre-fabricated, identical concrete forms arranged in various stacks, measuring up to twelve stories in height. Safdie’s intent was to reveal a high-density solution for urban housing that fostered social cohesion while taking advantage of the economies of scale achieved through pre-fabrication to maintain affordability.  Whether intentional or not, Habitat 67 serves a potent counter-argument to the Le Corbusier-influenced “towers in the park” approach common among much of the American Urban Renewal initiatives: that is, the public housing constructed in the 1960s, which includes such notorious examples as the short-lived Pruitt-Igoe complex in St. Louis, where architect Minoru Yasmasaki (best known for the World Trade Center’s twin towers) conceived social housing for a low-income population that failed to achieve any visible beneficent function for its thousands of residents.  Pruitt-Igoe, like Cabrini-Green in Chicago, became synonymous with concentrating the poor and the numerous attendant social ills.  The St. Louis sprawl of 33 towers only lasted fifteen years.

Habitat 67, though not specifically targeting individuals living in poverty, attempts to retain affordability while proffering the social benefits of middle-class suburban housing through clever arrangement of every modular iteration—privacy to each dwelling unit, distinctive plazas and gardens, and, perhaps most importantly, individuation despite the perceived “soulless” nature of concrete and modular housing, thanks to textured massing and interesting, seemingly gravity defying configurations.  As a result, it looks nothing like the Corbusian golems that loomed over cheaply landscaped plazas—the archetype broadly associated with 60s-era public housing in the United States (much of it since demolished).  The result of Safdie’s vision has remained successful to the present: Safdie himself, now in his 80s, still owns a penthouse.  And Habitat 67 endures as one of Canada’s most architecturally distinctive buildings—though not quite as definitive as the Opera House for Sydney, the Gateway Arch for St. Louis, or the Eiffel Tower for Paris, it’s certainly among the top sites in Montreal for tourists, offering regular guided tours.

But that touristic intrigue may prove the double-edged sword to Habitat 67, and to modular housing in general: while it captivated the public’s imagination, it has not won over too many people’s hearts.  Residents of this experimental community enjoy access to some of Montreal’s best river views and numerous opportunities to stroll amidst generous parkland created in the aftermath of Expo 67.  But Habitat 67 is isolated, and, though a few other condominium buildings stand just to the south, I have a sneaking suspicion that many residents here still find themselves dependent on a car.  Pedestrianism notwithstanding, modular housing, by and large, carries a stigma, not entirely deserved, of being cheap and secondhand; many people unconsciously conflate the practice with manufactured housing (partly justifiably, given the off-site assembly), but also with mobile homes.  Architect Abigail R. Brown, AIA, through her work with the firm Hickok Cole, created the presentation Fabulous Pre-Fab, an efficient and very fair defense of modular construction with clear reference to its disadvantages, which she includes market perception; even the adjective “Pre-Fab” is generally a pejorative.  But Brown also recognizes the tremendous efficiencies afforded by modular construction, including a speedier construction time, a better platform for quality assurance, and a practice that intrinsically reduces on-site waste.

Taking Brown’s point-counterpoint into account, it is probable that Safdie chose a vernacular in Habitat 67 that precluded his achievement from ever achieving mainstream appeal (though his professional success continued unabated).  Concrete remains, at best, a niche aesthetic choice, which, particularly among aspiring homeowners in the West, suggests an economical means of maximizing durability, resulting in an institutional character.  In most respects, Habitat 67 helped usher in the Brutalist architectural movement—a style largely associated with the fortress-like structures built in urban settings in the 1970s (when urban America was riddled with crime).  Given the common marriage between Brutalism and civic/university buildings, banks, or faceless office buildings that discourage visitors, it’s not surprising that the public uniformly rejected the movement, to the point that it was basically passé by 1980, and many preservationists now must rally behind the most significant Brutalist structures to save them from demolition.  Habitat 67 is under no such threat, but it transcends the uniform sterility of failed Corbusian incarnations like Pruitt-Igoe perhaps in large part because it never did fully take off.  It’s unique and thus remains fascinating, if not lovable.  The intricacy is easier to appreciate when up close like this photo; from across the St. Lawrence River, the slipshod, seemingly arbitrary stacking of identical cuboid forms vaguely resembles the favelas on a Rio de Janeiro hillside.  In other words, it has the long-distance appearance of an even greater concentration of poverty than American public housing.  Not a deserved analogy, I know, but certainly a reasonable one to the untrained eye.

Taking Safdie’s polarizing achievement into full account, subsequent architectural voices have approached modular housing with a more convincing effort at humanizing it, to which Brown in her presentation offers excellent examples.  Today, modular housing succeed in many high-costs cities, as long as it includes some cohesive visual cue that mitigates the monotony of the modularity.  But Brown also singles out one prominent American city for its persistent absence of good modular experiments, despite a culture and real estate costs that should support it.  Washington DC’s comparatively low union representation means labor rates in the city are lower than counterparts like Philadelphia and New York, which Brown sees as a disadvantage and impediment to a potential modular boom.  Clearly Brown wasn’t aware of this humble little installation in the city’s Brookline neighborhood, just a hop skip and a jump from Catholic University: 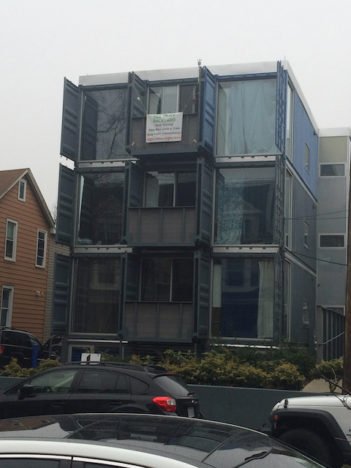 It’s not surprising that Brown didn’t feature it in her research, which dates from 2014, the same year (according to archived photos in Google Street View) this building went under construction.  In some respects, this anonymous little apartment structure—I can find no details about it online—seems to defy the lessons Safdie’s financiers should have learned from Habitat 67’s deep but not broad legacy.

Rather than hiding the pre-fabricated origins, this Brookline apartment wears its modular nature on its sleeve: 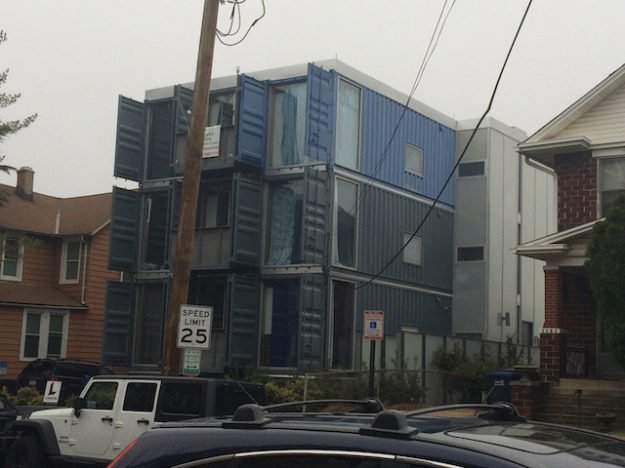 My experience working in Afghanistan recalls the name “ConnEx” that we applied to these units that resembled carriages in a freight train; they were everywhere on the compound where I lived and worked.  They served as storage, office, and residence in equal measure.  Germans in particular loved ConnEx structures as billeting; only the big-wigs among American personnel got to call them home.  I’m sure some of the detailing differs slightly, but, judging from this Brookland building, they occupy space with much the same operability as they did in theater, minus the generous windows, which were an obvious no-no in Afghanistan.  Such a structure is quite a novelty in Brookland, a neighborhood known for its stable inventory of single-family housing, disproportionately detached (an anomaly in older Washington DC neighborhoods, where rowhomes typically dominate).  But this modular building of approximately one dozen units may in itself still carry the tenor of gimmickry in a city where such installations are rare; check this banner hanging on the top floor: 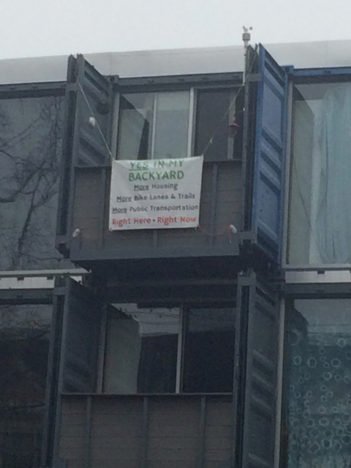 It’s an appeal to YIMBY-ism; the “Yes In My Back Yard” approach intended to counter those who object to non-conforming building uses, sizes, or aesthetics in a mature neighborhood.  I have no idea if the banner is an initiative from the building’s owner—it looks homegrown, from the tenant—but it definitely suggests that it is admonishing passers-by, and perhaps neighbors, to approach this idiosyncratic structure with an open mind, to be receptive to the efficiencies that it offers, and, perhaps in its own oblique way, to support modular housing in Washington DC on the scale of something like Habitat 67.  Is there a chance this appeal will succeed?  Will modular housing ever become widespread?  Not in my back yard.

PrevFrom buildings to benches: with enough ingenuity, anything in Lehighton can get the mural treatment.
More than just murals: Philadelphia’s distinctive and superlative legacy of public art.Next

3 thoughts on “Habitat 67: did Montreal’s mega-manifestation manage to make modular marvelous to the masses?”