In the approximately eighteen months since I walked along the underachieving arterial of Market Street in downtown San Francisco, its character has changed far more than anyone might expect. 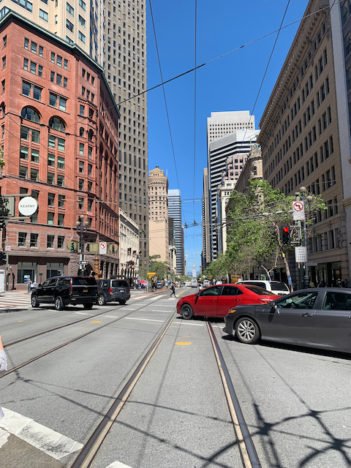 For such a prime thoroughfare in such a densely populated city, it’s surprisingly mediocre in terms of the density of foot-traffic, which, not surprisingly, leads to a general character of the retail that is sub-standard.  It’s not awful—it’s just that it’s hardly the equivalent of Fifth Avenue in New York, Rodeo Drive in Los Angeles, the Michigan Avenue (the Magnificent Mile) in Chicago, or the Champs-Élysées in Paris.  (Given the state of affairs these days, none of those traditionally great retail boulevards are what they used to be either).  Despite the considerable wealth and purchasing power nearby, Market Street has stubbornly resisted numerous attempts at revitalization.  In January of this year, the San Francisco Municipal Transportation Agency board closed off a sizable length of the street—the two miles that frames the Financial District—to essentially all private vehicles.  Only municipal buses, paratransit, emergency vehicles, commercially operated vehicles, and city-authorized taxis (not private ride sharing companies like Lyft or Uber) are now allowed to use Market Street, reserving more of the thoroughfare for bicycles and pedestrians along its generous (and soon-to-be-improved) sidewalks and protected lanes.  For all other motorists, Market Street has become nothing more than a cross street.

This initiative is, no doubt, what civic leaders in San Francisco expected to be their great milestone for 2020.  But a certain invasive, fast-replicating foreign micro-entity decided to upstage it.  Six weeks later, with the arrival and fear of widespread proliferation of the novel coronavirus, San Francisco, like most other US cities, began canceling major events and shutting down commerce to “flatten the curve” (a phrase that, at this point, sounds almost quaint).  It goes without saying that these restrictions radically limited commerce to the virtual, online forum, and, while many white collar and service oriented businesses continue to function using computers and remote workers, those that required physical contact for their transactions essentially ceased to exist.  Yes, this lockdown devastated retail—not the least because people have become even more dependent on e-commerce than in the past—but because the clothing and fashion industry, a major tenant in bricks-and-mortar storefront properties, has faced a collapse in demand.  No one is attending meetings or formal social functions; they have little reason to purchase new business casual or dress attire.  Thus, we witness the collapse of such major brands as Brooks Brothers, Joseph A. Bank, Ann Taylor, J. Crew, or seemingly luxury department stores like Neiman Marcus.

But, whether in San Francisco or anywhere else, this lockdown begs the question of what might survive when we emerge from the COVID catastrophe.  And this brings us back to the streetscape of Market Street. 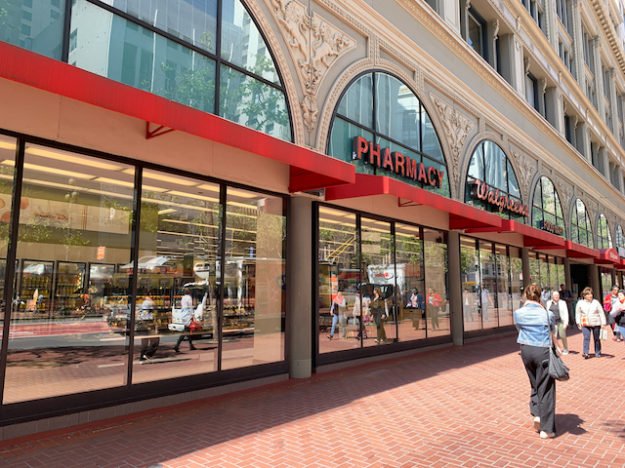 Even though these photos pre-date the private vehicle restrictions, they still offer a cogent point of discussion.  Another undesirable side effect of the lockdowns has been widespread unemployment and heightened social alienation, resulting in considerable conflagrations of civil unrest and rioting.  It would not surprise me if, in August 2020, plywood boards sheath this expansive row of windows to a Walgreens, or at least it did at some point earlier in the summer.  Drug stores have proven as popular of targets for looters as the remaining surviving locations of high-end fashion: Versace, Tory Burch, Burberry.  And the high degree of looting forces our attention to this modest little Market Street holdout. 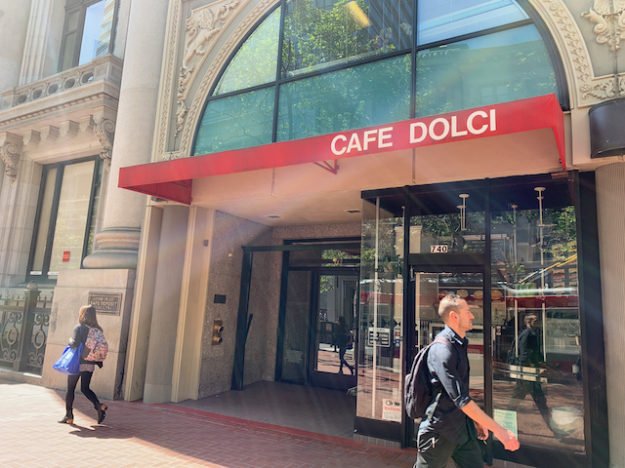 Café Dolci is a Vietnamese coffee and lunchtime banh mi spot that occupies even less space than it appears.  This photo better captures its modesty. 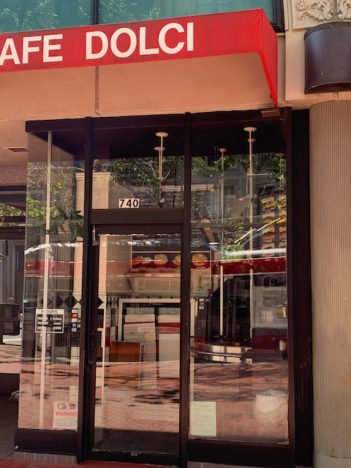 It’s little bigger than a food truck, yet occupies a permanent space adjacent to the entrance to a major commercial property on Market Street.  And although it is temporarily closed, I have more hope for its reopening and long-term flourishing than many restaurants with five times its capitalization ability…which is most restaurants.

It’s not unreasonable to make a case for microretail…again…this time, in the (hopeful) wake of a pandemic that forces social distancing.  Café Dolci, like most microretail, leases considerably less than 500 square feet of floor space, which is no doubt critical in expensive cities like San Francisco or Manhattan, where I ruminated on the promise of tiny storefronts last year.  The restaurant has no seating, so it has always sustained its business through carryout—a practice that the vast majority of states forced the country’s restaurants to use through most of this past spring.  Many establishments have continued a carryout-only service, avoiding indoor seating’s potential risks for COVID spread.  Café Dolci already understood the rhythm of serving customers in a brisk, queue-oriented configuration, and given its tiny floor plate, it should have no difficulties maintaining the more stringent maximum occupancy regulations due to COVID.  Lastly, as urban America continues to face a considerable degree of unrest and often destructive, non-peaceful protests, the relatively little exposure along Market Street may actually help microretail like Café Dolci: not only is there less vulnerable glass, but the place is unobtrusive altogether, unlike the enormous Walgreens nearby.  I hate for these features to serve as a selling point, especially when I’ve devoted considerable energy praising good street-level storefront fenestration (and condemned when we encounter the opposite), but those equity-shy entrepreneurs who can navigate a smaller leasable area may find it particularly advantageous during these volatile times.  Generally speaking, they should be less likely to get looted.

I have no idea if the recovery from this pandemic will prompt a rethinking about how we orient ourselves when engaged in commerce.  But it’s hard to ignore that, to a large extent, we’re already halfway there: all those decals and arrows are clearly compelling us to navigate consciously through public spaces and agoras like never before.  As far as San Francisco is concerned, the effects are already showing far greater geographic breadth and an influence toward street life than any amount of removing cars from Market Street could ever achieve.

PrevRegal Cinemas closes in Alexandria: a casualty of corona or a sign of bigger things to come?
From buildings to benches: with enough ingenuity, anything in Lehighton can get the mural treatment.Next

5 thoughts on “Café Dolci on Market Street: will defensive downscaling (and social distancing) pave the way for more microretail?”