From buildings to benches: with enough ingenuity, anything in Lehighton can get the mural treatment.

In the mid 2000s, I engaged in a group research project that assessed the economic impact of the Philadelphia Mural Arts Program (now called Mural Arts Philadelphia), the longest-running and largest initiative in the country—probably in the world.  Started on a shoestring City budget in the mid-1980s to address the widespread graffiti issue, Mural Arts Philadelphia is now the primary instigator of public art, with stewardship over 4,000 different installations, mostly based on collaborations with other local civic groups.  Philly’s mural culture is a subject I’ve explored intermittently on this blog, to varying degrees.  But at the time, the intent of our research was to determine if we could quantify any level of investment in communities that received a sanctioned mural, in terms of increased property values, new building permits, or other clear metrics.  The goal at the time was to investigate a widespread assumption that, despite the often considerable artistry involved, the presence of murals might actually harm a neighborhood’s reputation rather than help it.  That is, if a neighborhood in Philly had an unusually high concentration of murals, it meant that the district suffered an equally high number of exposed side walls of buildings—walls that fronted a vacant lot where an adjacent building had once stood, which had long proven the most desirable site for a mural.  And demolished buildings were typically a sign of disinvestment, if not outright blight.  Thus, the murals of the Mural Arts Program tended to cluster in areas with neglected vacant lots, and though they certainly beautified those immediate locales, it was possible that they signaled an economically struggling area.  The murals may even stigmatize the neighborhood.

Here’s a map I created that broadly summarized the project, using “heat”-based color ramp to indicate the general socioeconomic health of neighborhoods at that time, based on the extensive research funded through the City’s Neighborhood Transformation Initiative (NTI), implemented in 2001 by then-Mayor John Street. 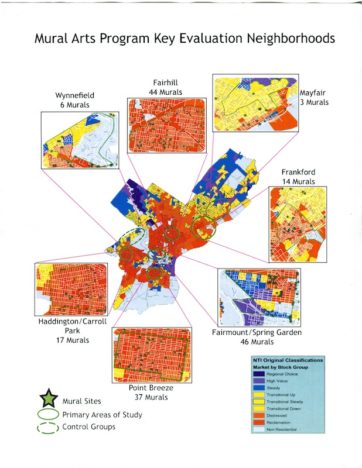 The research project yielded mixed results: while it was true that areas with murals tended to have lower property values than the median for the city, they often still boasted higher values than other economically challenged neighborhoods immediately nearby that lacked any significant artistic installation.

Regardless of the effect of murals on a district’s socioeconomic standing, numerous other communities large and small have embraced the idea that they enliven a dull, potentially neglected space.  Even when the skills of the artist are questionable, they still signal a degree of care or consideration that an unadorned wall intrinsically lacks.  Sometimes the mural initiative involves the commissioning of a local artist to honor a local figure, and it isn’t always in an economically lagging part of town, as is the case here in Indianapolis.  In other instances, the level of care is tantamount to the investment in paint—in other words, not much.  In Philadelphia, quite a few soup-to-nuts mural initiatives have sprung up outside of the sanctioning of Mural Arts Philadelphia, with often mixed results in terms of polish. But it’s still nicer than an unintentional blank wall.

Sometimes the effort stretches the definition of a mural, like this extremely fanciful (and skillful) attempt to create a recognizable image on the side of the Philadelphia International Airport’s major parking garage, despite the numerous slits and gaps in the façade.  And then, 75 miles to the north, we encounter this humble effort: 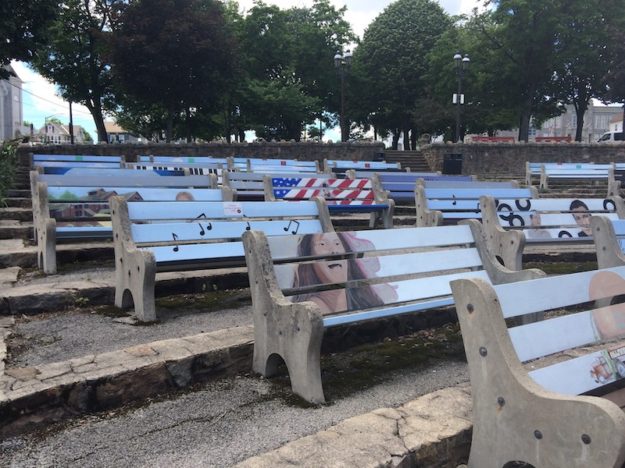 I fear that my choice of the adjective “humble” drips with urbanite condescension.  These painted benches are, after all, in the much smaller borough of Lehighton, nestled deep within the Pocono Mountains, population 5,500 (or less).  They provide seating to the signature attraction in the two-block downtown public plaza, Colonel Jacob Weiss Park, flanking the municipal building. And that prime attraction is a bandshell. 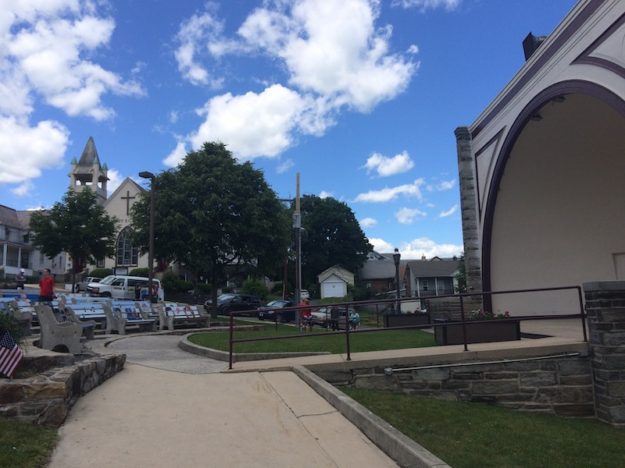 The natural slope of the terrain—everything in the Poconos is on a hillside—precludes the need for stairs or risers, so a bandshell at the block’s lowest elevation is a logical installation.  And I don’t think anyone would ever claim that the images festooning these benches is the accomplishment of one of the world’s greatest artists, but I don’t want to malign the clear attention to detail. 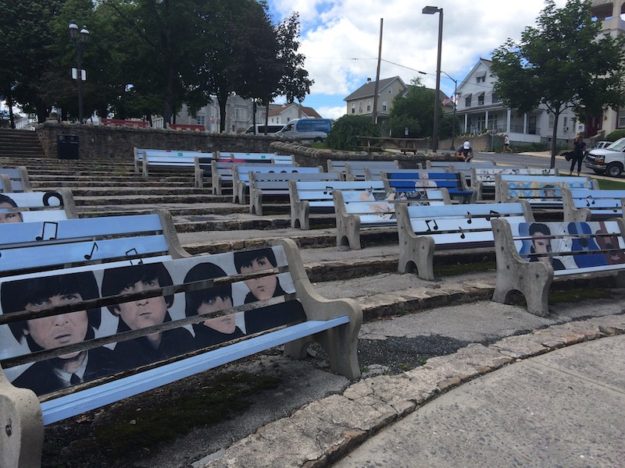 Among the musical icons decorating these benches are some predictable ones: the Beatles, Elvis, Janis, Frank Sinatra, but also some less obvious choices that I wouldn’t have guessed without a label (such as Allman Brothers Band).  A patriotic backdrop suggests the bust of John Philip Sousa (though I don’t necessarily think that’s who the bench is depicting).  I even witnessed a few classical figures, such as Beethoven, an apparent lutist(?), and the genial face of a conductor—maybe Eugene Ormandy?  He directed the nearby Philadelphia Orchestra for many years.  A few of the benches remain unadorned, suggesting not only that they are awaiting the right creative idea for implementation, but that the entire undertaking involves a variety of different artists, presumably from Lehighton or nearby.

The fact that not all the musicians are obvious—due either to their comparative obscurity or the lack of ability of the artist to depict them convincingly—doesn’t really detract from the overall effect.  And the overall effect is certainly modest.  But scale is critical: a town of this size is not necessarily going to be able to claim any sizable intrinsic attractions.  And as far as this portion of the Pocono Mountains is concerned, the real attraction is the town of Jim Thorpe, just two miles from Lehighton, whose more dramatic topography and meticulously preserved 19th century architecture make it a popular tourist destination for visitors availing themselves of the outdoor opportunities.  A band shell in a town the size of Lehighton isn’t ever going to lure an artist remotely at the level of fame of the ones depicted on these benches; the whole installation probably seats a little more than a hundred people.  But the painted benches remind the residents of greater Lehighton that there’s a centerpiece to the town—a recreational locus that certainly intends to lure enough people to fill those benches with a concert series during the warm-weather months.  And probably does fill them at least a few days a year.  Standing room only.

This attempt at musical collage scattered across a cluster of benches evokes much the same effort as the early days of Mural Arts Philadelphia: a clear attempt to improve a distinct geographic area through a splash of color.  Granted, Lehighton probably doesn’t harbor enough graffiti artists engaged in illicit vandalism to warrant murals as a crime-prevention strategy.  But it still signals reinvestment the way it would in a major city.  Sure, there’s the possibility that the over-deployment of murals may hint at a district that has struggled over the years—an apt characterization of Lehighton.  But these benches hint at a competition among various artists which, in aggregate, manifests itself as collaboration that can only help push the bar forward for civic unity.  And even if it wasn’t a competition, the exchange of time, money, and labor clearly involved some collaboration.  Even if unconsciously, the influence of Philadelphia’s expansive mural initiative shows its reach in another part of the Keystone State—and replicated to varying degrees all across the country.  And the globe.

PrevCafé Dolci on Market Street: will defensive downscaling (and social distancing) pave the way for more microretail?
Habitat 67: did Montreal’s mega-manifestation manage to make modular marvelous to the masses?Next

7 thoughts on “From buildings to benches: with enough ingenuity, anything in Lehighton can get the mural treatment.”