Reviving the vintage advertising banners: a nostalgia gimmick or a rediscovered commodity?

Am I the only one who has noticed the growing presence, particularly in the last few years, of restored advertising banners on the sides of brick buildings, like we used to see in days of yore?  Most people know what I’m talking about; here’s an example in a well-preserved historic district a few blocks east of downtown Frederick, Maryland: 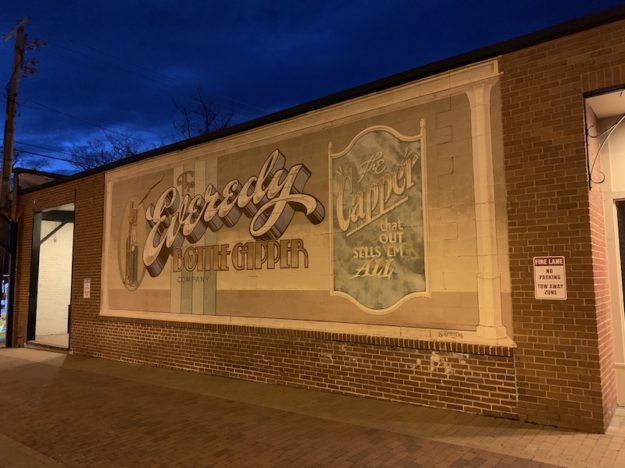 Prior to encountering this banner, I wasn’t familiar with the Everedy Bottle Capper, nor with the Everedy Company in general.  But it was a successful manufacturer of various kitchen products—some familiar, some innovative—for over a half century, opening during the peak of Prohibition and closing in 1977, resulting in considerable job loss for greater Frederick.  The sprawling campus that housed the old factory has enjoyed a second life for quite some time as Everedy Square, a mixture of offices, shops, and possibly a small number of apartments.  The best known Everedy product remains the Bottle Capper featured in the mural, a vise-like contraption that supposedly allowed as good of a seal on a bottle as one might expect right out of the factory.  It was popular among households clandestinely storing homegrown moonshine or brews in a securely sealed container, and specifically because it’s hard to find today, the Bottle Capper is a prize among antique collectors and aficionados of Prohibition-era goods.

Along this wall, at the site of the former factory in Frederick, the Bottle Capper has a beautifully stylized tribute to both the device itself and the heritage spawned by the otherwise largely forgotten old company.  The marble and metallic colors, the emphasis on vertical lines, the cleanly modern typeface—all of them evoke in my eyes the Art Deco sensibilities that flourished in the 1920s.  It’s hard to say if a mural or banner always claimed this wall, or if this was a more recent installation: the mantle of bricks lining the bottom edge, combined with the use of smoother, cinderblock material at this site, suggest that a dedicated mural of some sort was always the intent.  Regardless of when it went up (it’s been there for at least a decade, as proven by archived Google Street View), advertising banners such as these were ubiquitous during the era when Everedy first rose to prominence.  More often than not, they’d occupy the wall space of a building that was taller than its neighbor, adding visual interest and commodification to the blank wall peeping over another structure’s rooftop.  Sometimes we might see these banners on fully exposed side walls, especially when the wall fronted an alley, as is the case for Everedy Square. 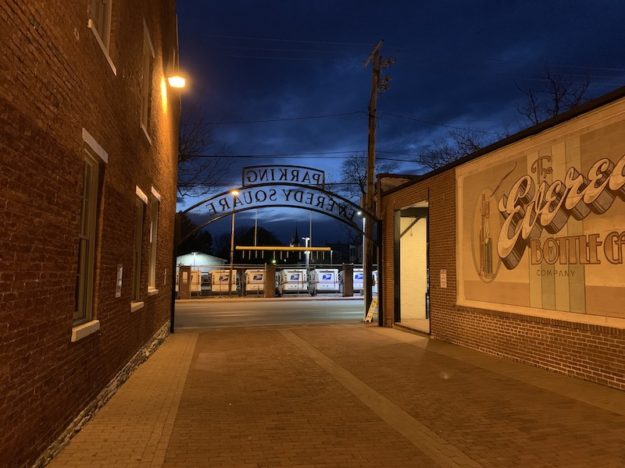 And sometimes even a blank wall on a prominent corner at the intersection of two major streets would feature one of these advertising banners.  On the rarest of occasions, the owner of a building might decide that even a wall with extensive fenestration merits some good, persuasive advertising banners, and they’d paint a logo or design around the various punctured window frames, creating an unusually busy and cluttered façade.

Particularly interesting, in my opinion, is that advertising banners were most popular and prominent in an era when urban quarters still featured lots of buildings abutting one another, without any gaps in the street wall for parking lots or other, structure-less uses.  We crammed as many buildings as possible into a block, when gridded urban settings were the only high-value commercial node, so any exposed side wall was prime advertising real estate.  In later decades after World War II, as downtowns began to decline, with parking lots replacing some of the more obsolete and derelict buildings, painted advertising banners became far less common, fading and flaking away over time.  Their demise is a bit ironic, since side walls themselves became far more prevalent, thanks to those newly created parking lots where a demolished building once stood, yet the need for side walls diminished, in part replaced by mounted billboards, which had the advantage of leasing wall space for a time, only to be replaced with new advertising content with little effort compared to repainting a brick wall.  But the advertising banners faded from the public consciousness because, in large part, the aggregate value of downtown buildings plummeted in the second half of the 20th century.  With fewer businesses downtown, there simply weren’t the same number of eyes to gaze upon such things.  No need to advertise.  Those side walls stood, blank and ignored and ugly, for decades while our urban areas languished.

As downtowns began to revitalize in the last decade of the 20th century, these old side walls benefited from more eyes on the street, yet the demand for parking remained strong enough to stymie the redevelopment of every single adjacent parking lot into an infill structure.  With so many massive blank walls remaining exposed, but with far more pedestrians nearby to gaze upon them, demand and interest in adorning that vast brick escutcheon with a corporate coat-of-arms began to skyrocket.  Billboards or backlit signage remain popular, but painted walls have earned their own distinct cogency in the urban landscape.  The city to pioneer the decorative mural was Philadelphia, long the leader of such an endeavor, which still boasts a publicly funded program to support new artistic initiatives on old blank walls, as well as spawning less polished but often charming homegrown imitations in less salient neighborhoods. But murals generally serve a purpose, first and foremost, as commissioned art, not specifically wedded to commercialization, which is why I avoid the term “murals” when referring to these advertising banners.  In the last fifteen years or so, numerous other cities have followed Philly’s lead, adorning both brick buildings and drab infrastructure (retaining walls or even culverts) with murals intending to serve exclusively as civic art.

Perhaps most intriguingly postmodern, though, are those incarnations that seemingly fuse art with commercialism by capitalizing on the nostalgia triggered from revitalizing old urban structures.  Or, better even still is when the artists toy with the interplay between these two expressive forms, resulting in ambiguity on what the final objective might be.  I can find no better example than a painted banner fronting an alley in Barracks Row within Washington DC’s Capitol Hill neighborhood: 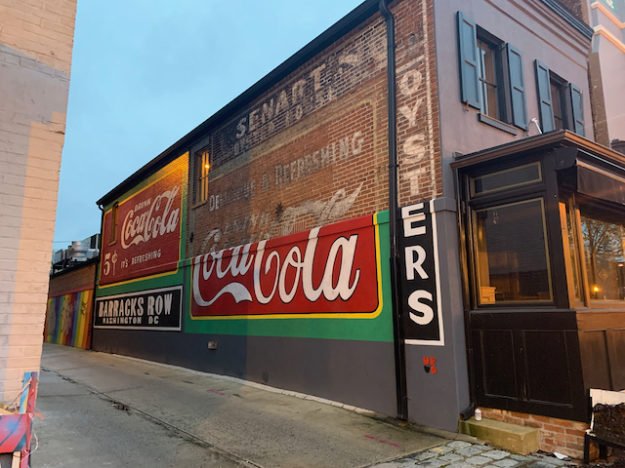 Did the commissioner or the artist run out of money and leave the thing unfinished?  Is it a genuine revival of an old Coca-Cola ad, or is it merely a newfangled spin on faded paint for a product that survives?  I don’t know the answer, but, given that Barracks Row is a fairly recent branding term for the four-block commercial portion of 8th Street Southeast, I’d wager that at least part of this mural (or advertising banner?) is bona fide and another part is a reinvention to meet the neighborhood’s contemporary goals.  And the vintage, untouched portion with faded paint will remain “unfinished”, to prove to people that this was in fact a genuine advertising banner from eons ago.  No need to contrive nostalgia; the authenticity is earned.  But good luck finding an Everedy Bottle Capper to keep the fizz in your bottle of Coke.  Try eBay.

PrevGerman Street in Shepherdstown, WV: where, instead of a curb at the sidewalk, there’s a fence.  And shrubs.
Right-of-way vacation in Mountain View, CA: where eliminating a street is just a walk in the park.Next

9 thoughts on “Reviving the vintage advertising banners: a nostalgia gimmick or a rediscovered commodity?”