Right-of-way vacation in Mountain View, CA: where eliminating a street is just a walk in the park.

As cites grow and urbanization spreads outward, the most common practice is to build new roads or to expand the capacity of the existing ones.  I don’t think this merits much of an explanation.  Of course, as the population increases, an elaborate network of roads becomes more essential, to accommodate both people and (inevitably) their vehicles.  But how that road network operates can vary greatly, from the predictably gridded configuration that serves the majority of American downtowns, to the more hierarchical, “tree-like” configuration, with thick/wide arterials (the trunk roads), collectors (the main branches), and locals (the leaf-bearing twigs).  Much of American development patterns since 1950 involve a sort of hybrid of these two approaches: a hierarchy of mid-tier collector roads provide access to the minor stub streets and cul-de-sacs that serve private residences, but all of this falls within a master grid, with prime arterials that parallel the range-and-township line surveying first executed in the late 18th century through the Public Land Survey System, which has given much of the US its signature “checkerboard” appearance visible to anyone flying westward from Chicago.  And within those mega-grids are a bunch of tree-shaped suburban subdivisions.

The strategic placement of public rights-of-way have helped render the vast majority of the world’s third largest country (3.8 million square miles) accessible by car.  That is, most privately owned homes and structures are no more than a mile or two away from a public road, despite the fact that the country as a whole less densely populated than most: if the world’s population density is approximately 150 persons per square mile, the United States is barely half this number.  But, outside of parts of Alaska, northern Maine, and a few other sparse regions, the roads will get us pretty much anywhere.

Keeping this consideration in mind, it may seem strange that some municipalities would, as they continue to grow, elect to remove some of their road segments.  But that’s exactly what has happened in the attractive suburb of Mountain View, California, part of the concatenation of prosperous communities south of San Francisco Bay that comprise Silicon Valley.  Mountain View is not the biggest, wealthiest, nor the most famous, but, thanks to the presence of several world-renowned tech companies within its city limits, coupled with its advantageous position between tech mecca San Jose and Palo Alto (home of Stanford University), as well as a convenient CalTrain ride to San Francisco, the city of 75,000 remains a coveted place to live and start a business, even if astronomical housing costs have tempered the growth in the 21st century.

Even amidst the outrageous real estate—or perhaps because of it—the demand to live in Mountain View remains great enough that the City allowed the vacation of a segment of road right near the heart of downtown and a stone’s throw from the Mountain View CalTrain station.  And the well-attuned eyes can see this vacation: 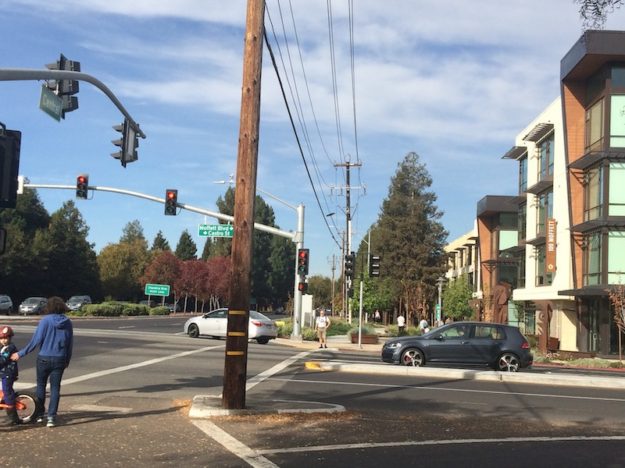 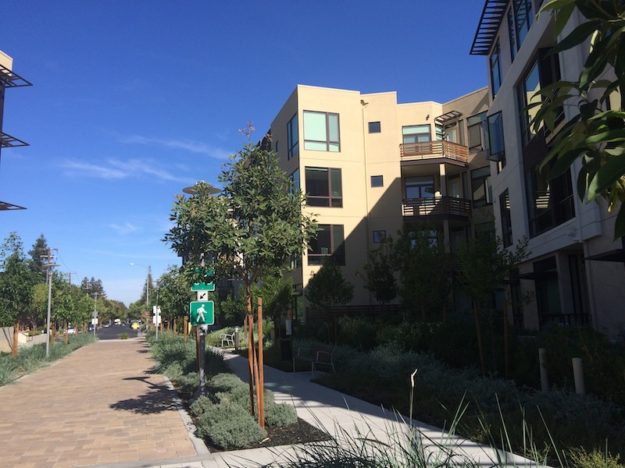 But why use the word “vacation”?  It’s merely the nominalization of the verb to vacate, which is the appropriate legal term for the practice of officially removing the easement that grants public right-of-way dedication on a planar surface historically used to convey people and/or vehicles, thereby transferring it to private interests, or a private property owner altogether.  Put more succinctly, it’s the termination of public interest in a right-of-way.  Both municipal and county governments can initiate street vacations, often in collaboration with the owners of the adjacent properties, so that a street or (especially) an alley turns into a long, narrow strip of a parcel that the adjacent property owners will typically “chop up” (subdivide) to expand their land.  More often than not, vestiges of the old road remain visible, which is how I was able to detect this example in Mountain View. 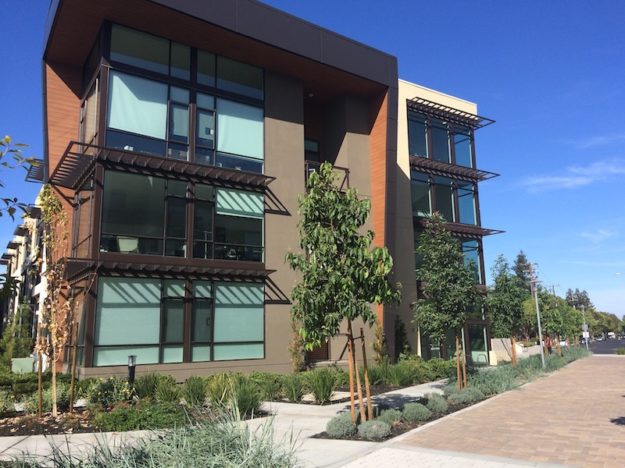 Just look at the building in the photo above.  It’s obviously not that old.  Then look to the pedestrian path just to its right.Multifamily residential, all of it less than a decade old, straddles the path, which essentially functions as a calming, landscaped, linear park. 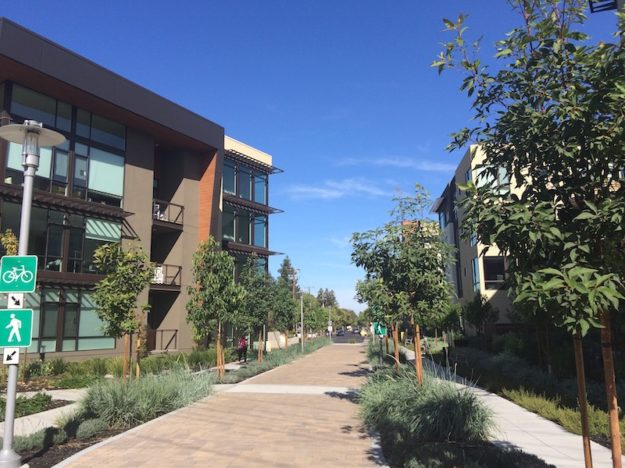 But, in the distance, the bend of a road that continues in the exact same trajectory as the pedestrian path from which I took the photo below: 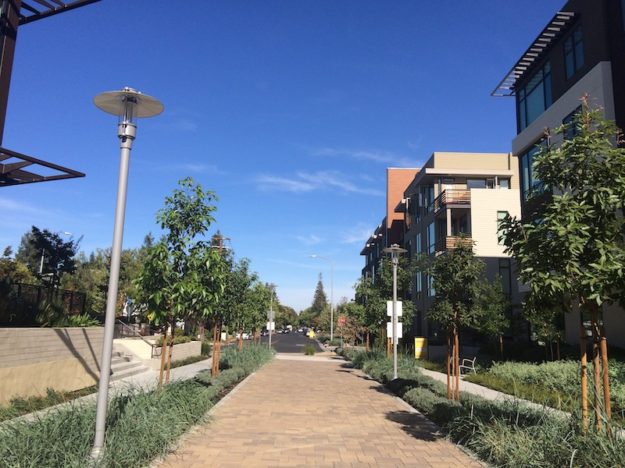 Here’s what it looks like from overhead, in mapped form: 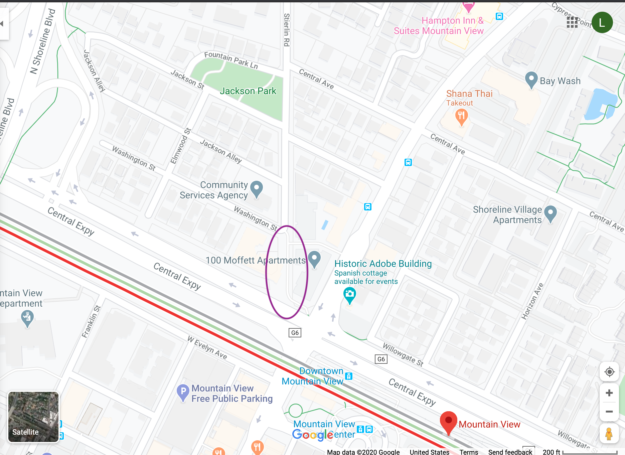 The segment of Stierlin Road circled in purple is the pedestrian path featured prominently in the preceding photos.

Pretty obvious at this point, isn’t it?  In the past, the diagonal Stierlin Road continued southward from Washington Street, most likely intersecting with Central Expressway.  A quick trip through time using archived photos from Google Street View reveals what the area looked like before the construction of the 100 Moffett Apartments seen in these photos.  (Google Street View is unusually active in Mountain View, offering photos every few months instead of every few years, which should come as no surprise; the city is home to Alphabet Inc, parent company of Google, and the Googleplex is barely a mile away from this site.)  Here’s the vista along Central Expressway a decade ago, before the construction of these apartments; the land hosted a smattering of uses, from low-slung commercial to parking lots.  And the first Street View link also reveals the terminus of Stierlin Road, with a cul-de-sac leading into both a parking lot and then a small spur street that allows motorists to merge with westbound traffic on Central Expressway.  Even back in 2009, Stierlin Road didn’t intersect with this busy arterial; though initially designed for that purpose, it probably caused impossible traffic bottlenecking from vehicles wanting to make that sharp turn, and it interfered with the signal-controlled intersection between the expressway and the much more prominent Moffett Boulevard just a hundred feet to the east.  Here’s what it looks like today, standing around where the road used to lead to parking lots: 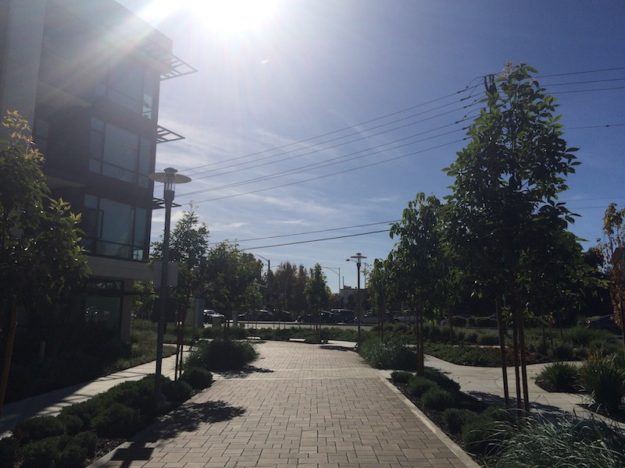 And here’s the current site of the cul-de-sac that previously comprised the southern terminus of Stierlin Road (in itself another vacation of a tiny strip of right-of-way that would have allowed the intersection): 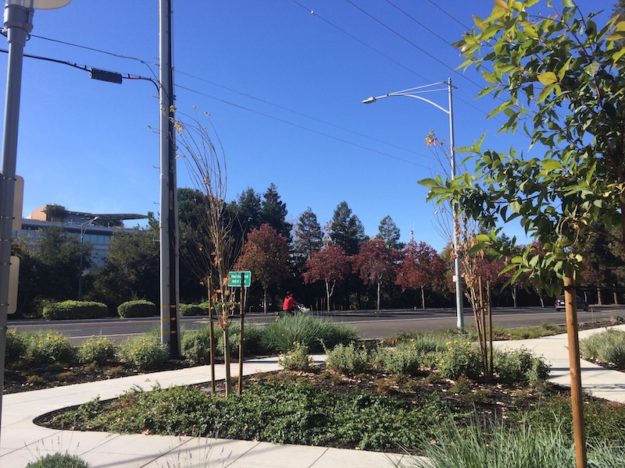 The vacation of that block-long segment of Stierlin Road was inevitable; there’s no way it would be desirable to have market-rate apartments flanking a street with full vehicular access to the nearby arterial; residents of these buildings would want as much buffer as possible.

Regardless of the intent for Stierlin, it was obvious that, thanks to high demand at this lucrative intersection, a parking lot simply wasn’t going to pass muster around here forever.  The main commercial district of Mountain View extends just south of Central Expressway, where Moffett Boulevard becomes Castro Street, the city’s commercial main street.  Around, the land is worth too much for parking lots.  This type of vacation of public access has becoming increasingly common in gentrifying urban settings.  More often than not, the offending street is little more than an alley, slicing across two larger, privately owned expanses of land that a developer would like to unify into a single mega-parcel.  But the alley prevents it.  By petitioning for an alley vacation, the developer can fuse together the remaining parcels, as long as the alley serves no essential function and a majority or a significant majority (two-thirds) of the remaining abutting property owners show their approval through a petition.  (The exact percentage necessary for consensus can vary by community.)  We’re likely to see more of it in the years ahead, as alleys continue to face long-standing stigma for the stereotypes that they are neglected and frequently unsafe, not befitting upscale suburbs.  And municipal public works departments are more than happy to divest themselves of rights-of-way that cost money to clean and maintain.

But why did the developers save the old Stierlin right-of-way as a pedestrian path?  Why not build over it as well and further capitalize on the land for lucrative apartments?  The most likely answer is that the transportation easement that had previously made Stierlin Road a path for public access also shared land with other easements—specifically, utility easements for water, sewer, gas, stormwater, and potentially even electric lines, all running underground under the exact same trajectory.  Not only would it cost considerable money to extirpate these buried lines, it’s not warranted.  They have always served private uses, and the developer of the apartments could link this higher density (and higher value) use to these existing lines.  Removing them would let them go to waste, so it’s easier just to pave over them and build a pedestrianized park between the two main structures.

Given all of these considerations, it’s no surprise that the vacation of a block of Stierlin Road proceeded in Mountain View, most likely with little community opposition.  The 100 Moffett Apartments are a higher and better use—more attractive too.  Thanks to the nearby presence of the CalTrain Mountain View station, they’re also a textbook exercise in transit-oriented development.  And they are an easy walk both to downtown Mountain View (literally across the expressway) and the Googleplex.  So, while the conventional wisdom is that a growing community needs more roads to support it, a smartly growing community, with robust pedestrian and transit support, can engage in a little nip-tuck of the unnecessary roads.  No harm, no foul—an improved tax base for the municipality, and, much to the relief of one of the world’s most strained and expensive markets, a nice little uptick in housing.

4 thoughts on “Right-of-way vacation in Mountain View, CA: where eliminating a street is just a walk in the park.”