German Street in Shepherdstown, WV: where, instead of a curb at the sidewalk, there’s a fence.  And shrubs.

The prosperous little municipality of Shepherdstown, fortuitously situated along the Potomac River in the eastern panhandle of West Virginia, boasts a charming three-block main street, German Street, with nothing but locally owned establishments, achieving almost perfect occupancy amidst its variegated, well-maintained 19th century buildings.  It’s an enviable arrangement, no doubt enhanced by its location in the outer outer exurbs of Washington DC, whose affluent residents have christened it a bedroom community for those who don’t need to make the 90-minute commute into the heart of the city every day.  A medium-sized state college, Shepherd University just down the street, ensures it of a stable base of students to patronize these businesses.  (The enrollment of 4,000 students is more than double that of the municipality itself.)  And the natural vistas spawned by the mouth of the Shenandoah River down the road at Harpers Ferry (a major tourist attraction) ensure the area of plenty of weekend visitors. I’ve blogged about the town before; virtually everything seems to have fallen into place to make Shepherdstown a picture-perfect stand-in for small-town Americana. 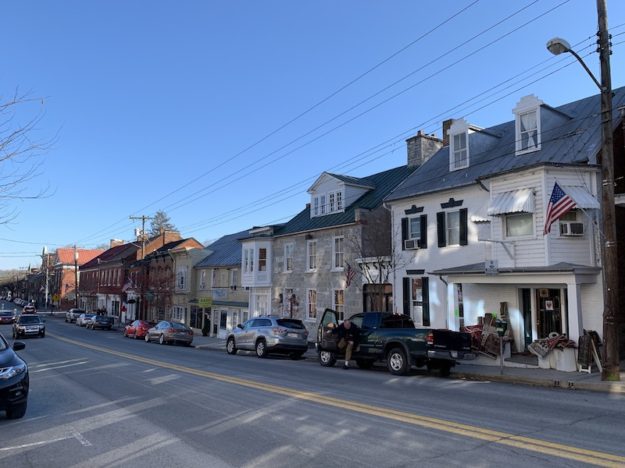 But I’ll have to confess that it took me by surprise when I noticed that, on one side of German Street, a deliberate barrier prevented pedestrian access between the sidewalk and the street. 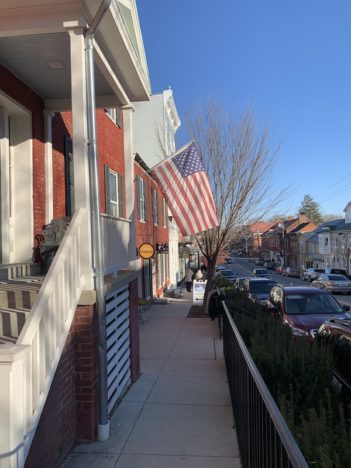 The thick shrubbery enhances the impediment; it’s a sort of hostile vegetation preventing access, yet some entity maintains the bushes enough to keep them from impeding visibility to the storefronts.  What would be the reason behind this?  Normally I would impugn such a design decision: it prevents pedestrian access except at dedicated crosswalks, and while some would appreciate this physical deterrent to jaywalking, the commercial district of Shepherdstown is hardly going to undermine drivability because a few choice pedestrians disobey the crosswalks.  Furthermore, this barrier along the curb creates a potential disincentive for on-street parking, because the fence and bushes are likely to “pinion” the passenger car door, forcing the passenger to climb across and exit the car from the driver’s side—a condition I witnessed several years ago in Chicago.

But perhaps there’s another reason for this curbside barrier—a more logical one.  The photo below, from a slightly different angle than the preceding one, should make it clear: 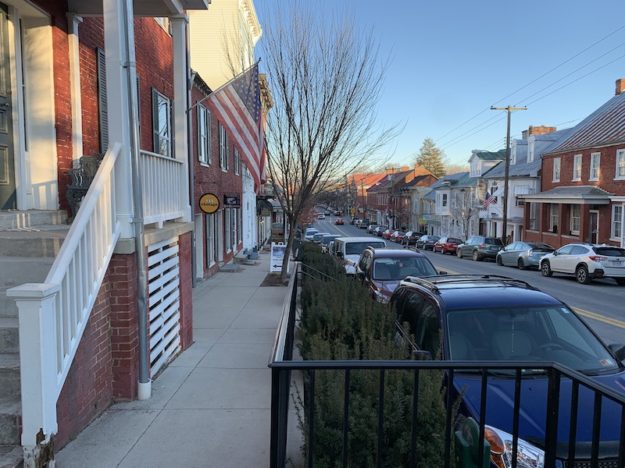 The street is of a substantially lower grade than the abutting sidewalk—at least two feet. 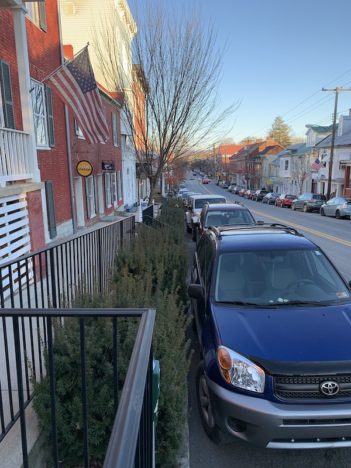 The grade change is significant enough that, at one of the few apertures in the wrought-iron fence, stairs are necessary to surmount the curb. 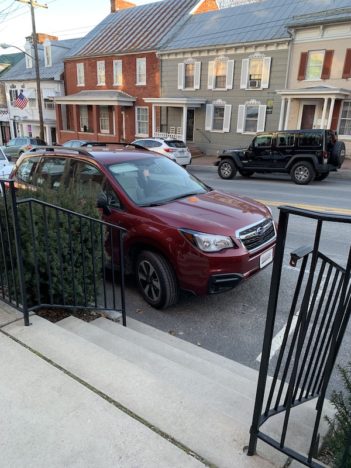 In most of the country, such an arrangement would seem extravagant at best, if not completely unnecessary.  But anyone who has traveled through West, By God, Virginia knows that the state has nary a flat square mile, and a completely level square meter is a rare encounter.  By comparison with much of the Mountaineer State, Shepherdstown seems comparatively level, yet German Street’s grade change manifests itself across two axes.  The more traditionally conspicuous one parallels the road, revealing an uphill climb as one travels westward. 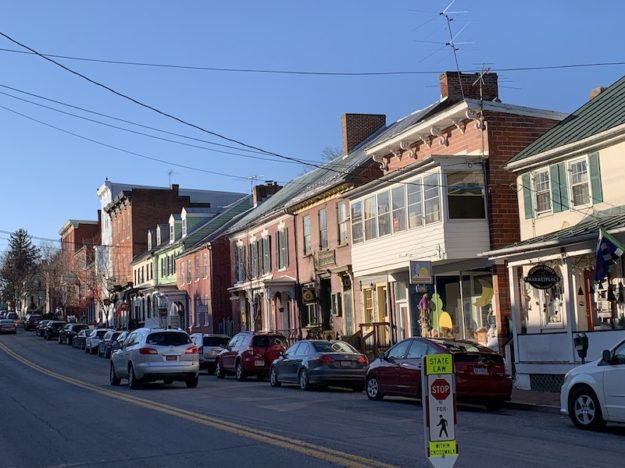 But then there’s a growing difference along the north-south axis, perpendicular to German Street, so that the north side of the road is at increasingly sharper grade than the south side, or even than the street itself.  At one segment, the curb’s height is conventional. 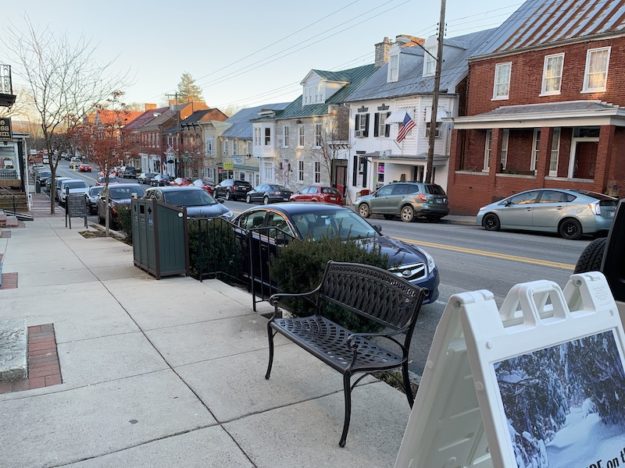 But as the difference between the sidewalk and curb begins to diverge, the fence is necessary to avoid a falling injury. 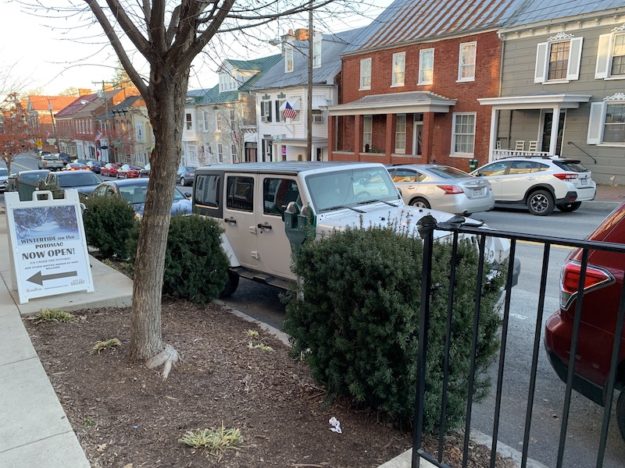 The presence of a railing-style barrier here is almost definitely appropriate.  According to Section R312.1 of the International Building Code (IBC), a guardrail is necessary when the difference between an upper and lower walking surface reaches or exceeds 30 inches.  Unfortunately, the fact that the grade change becomes so significant to necessitate stairs poses another problem: basic access to the sidewalk on this side of German Street is nigh impossible for wheelchairs or other persons with access and functional needs.  A set of stairs, no matter how small, is unequivocally not compliant with the Americans with Disabilities Act (ADA).  And can one imagine how a disabled passenger (even one not dependent on a wheelchair) would manage if the driver ends up choosing this on-street parking space? 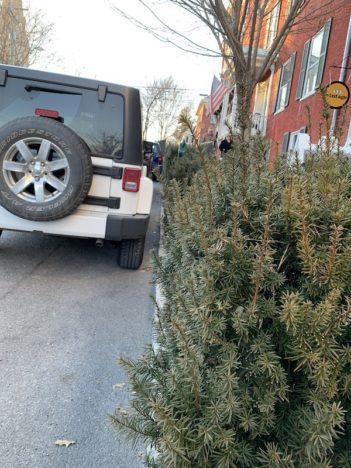 It obviously wouldn’t work at all, and the driver would have to relocate.

Despite the shortcomings of this German Street design, I’m not willing to assert that the cure is worse than the disease.  A three-foot curb undoubtedly needs safety measures; it and, while it’s unfortunate that an ADA-compatible ramp could not accommodate wheelchairs at that mid-block entry point (instead of the stairs), at least the corner of German Street and Church Street offers a solution more akin to universal design: 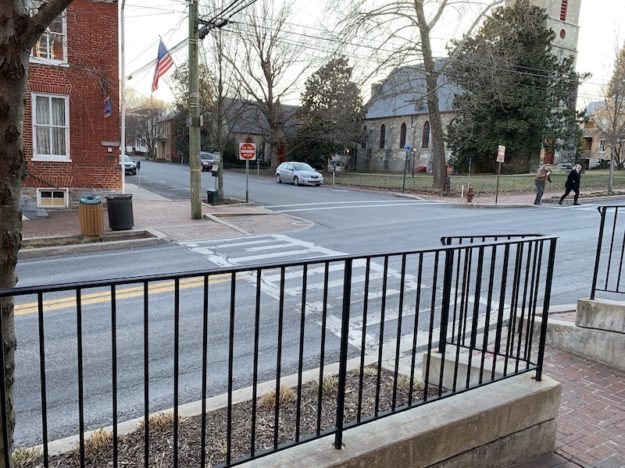 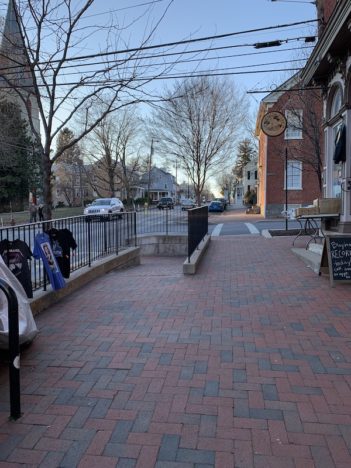 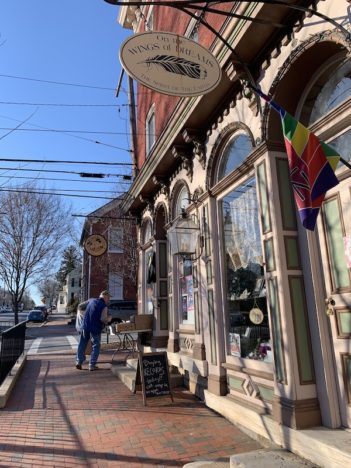 I have no doubt that this upgrade cost a certain entity a few hundred thousand dollars.  I say “a certain entity” because it’s hard to tell exactly who financed it: a municipality the size of Shepherdstown cannot always justify a Department of Public Works (though it appears to have a public works building and a PW committee).  Given the cost, it would not surprise me if the Town applied for a Transportation Alternatives Program (TAP) grant from either the state or the federal disbursement entity, Moving Ahead for Progress in the 21st Century (MAP-21).  Regardless of who or what funded it, the entire undertaking reveals an above-average attention to detail—a measure intended to eliminate a minor safety hazard without rendering the new design inaccessible to wheelchair—or ruining the visibility of the storefronts—through as uncomplicated and aesthetic of a means as possible.  And it’s fairly recent, as can be compared from a 2019 Google Street View with its 2008 counterpart.  Perhaps most significantly: the Google Street View scan reveals that the entire length of this design solution involves only about half of one block of German Street—hardly a condition that leaves pedestrians “trapped” within the sidewalk.  From a matter of scale, this German Street investment seems about as carefully conceived as one might hope.  I’d rate it a B+.

Why not  better?  The next time you drive up to park along this sidewalk, try asking that question to the passenger in your car.

PrevDirt spills onto Instagram.
Reviving the vintage advertising banners: a nostalgia gimmick or a rediscovered commodity?Next