Usually I like my articles to be “outside of time”—that is, I avoid subjects that are completely beholden to some current event.  But by March of this year, that all changed.  How couldn’t it?! It was virtually impossible to avoid the coronavirus, both artistically and epidemiologically.  (I still estimate there’s about a 50% chance that I caught it back in February.)  As life creeps toward normalcy after months of a pandemic tilting the world order on its side, I can’t help but reflect on how it has influenced my blog: for the first time in over a decade of writing, I’ve allowed a global event to completely dominate multiple articles; COVID-19 has prompted me to explore its influence on how we maneuver in public spaces (the micro) and on urban form in general (the macro) from a variety of angles.  The first few articles generated considerable interest; then it died down considerably.  I still write on the subject, though, because it’s hard to avoid.  But as the COVID coverage begins to taper, I recognize that, ideally, relatively few of the reactionary changes we’ve made will stick with us in the long term.

Yes, “stick” is a pun.  Because one thing we’ve all witnessed is the proliferation of adhesive reminders of how we should be socially distancing.  And something tells me that those with the greatest adhesion power will stick with us for quite some time—long after the ravages of the pandemic.  The most familiar, I suspect, are the arrow markers in grocery stores, essentially turning each aisle into a one-way street.  Equally common are the decals admonishing people to wait for the cashier at certain spots that promote social distancing and free flow of traffic for those not in the queue.  This example in Washington DC’s Eastern Market shows both in operation. 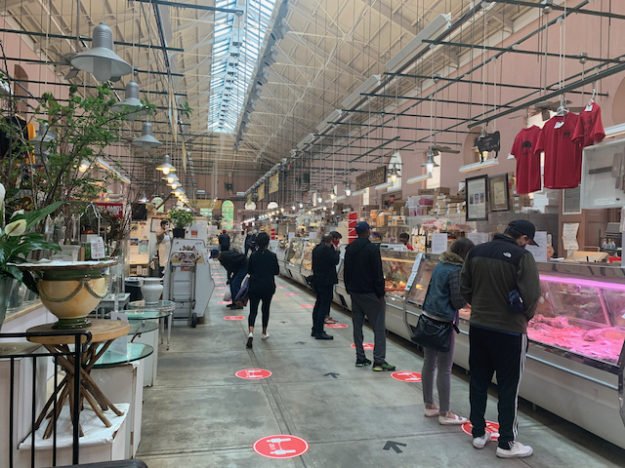 Many of the decals have a professional sheen to them, though the arrows I encountered at a northern Virginia gym were nothing more than duct tape.  Equally unsophisticated (much to my surprise) were some arrow indicators at a food court in O’Hare International Airport (ORD).

The debate is likely to rage long after COVID on how serious and effective the federal response has been in stopping the spread, or if top-down initiatives could effectively stymie contagion at all.  But, as much as some may cavil about the federal promulgation of social distancing policy, they sure do like their decals.  The back entrance to the US Capitol building is peppered with them. 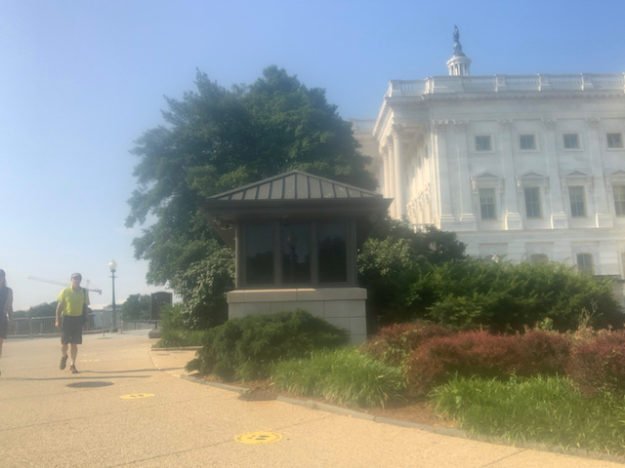 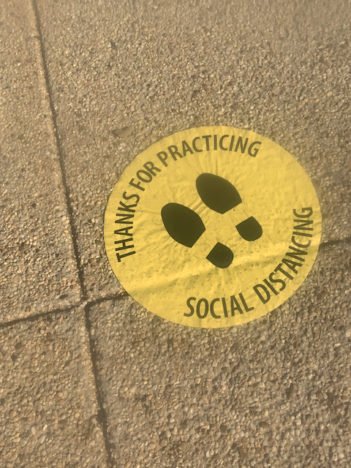 They snake around the northern side of the Capitol, a good hundred feet away from any major entrance.  But better yet: this entrance is already exclusive to either government officials, employees at the Capitol, or citizens with special appointments—authorized visits.  These decals do not mark the queue for the tourist entrance, which is at least 500 feet away through an underground ramp and is the only entrance likely to elicit genuine crowds.   Not surprisingly, the US Capitol remains closed at this time for all tours.  So these decals manage a more rarefied queue; they offer further control to a crowd already subject to intense security.  Regardless of what distancing measures these decals enforce, I foresee them remaining fixed to the pavement for many years after the panic has ebbed, worn out by shoes, bleached by the sun, a reminder of the anxiety of this inordinately challenging year.

Less common are instructional decals intended to reduce people’s physical contact with potential nodes of high contamination, like this one across the river in Arlington County, Virginia: 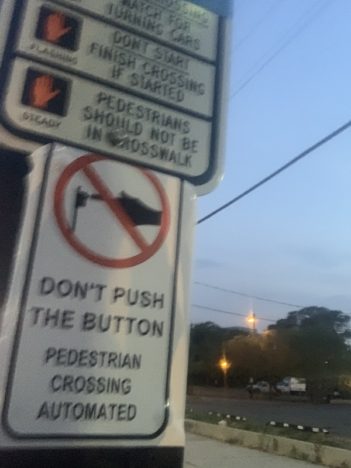 Sure, it’s not quite a decal, it’s not federal land, and it probably won’t survive as long as the ones on the ground, but the policy indicated by the signage might linger for years.  And, in the eyes of many pedestrians, that’s an improvement.  An annoying feature of crossings for the last twenty years have been the user-activated nature: the concept that pedestrians must push a button to activate the “Walk” signal at a busy intersection.  With dirty hands arousing high levels of suspicion in the era of COVID, the local leadership has decided to override that feature so that walk signals operate in tandem with the stoplights.  I have a sneaking suspicion this automated, hands-free policy will remain long after the sign wears out and falls down; the button-activated crossing has never been popular, and it seems particularly unnecessary at an intersection with a stoplight, as was the case here.

But the most extreme exercise caution returns us to the District, at a waterfront pedestrian path along the edge of the walled-in Washington Navy Yard.  Though not exactly an obscure area, it isn’t exactly a hotbed of pedestrian activity, since it really consists of a corridor wedged between the Anacostia River and the highly restricted military installation.  It’s never busy.  And it’s not a decal.  But the powers-that-be still found the time to place an unusually protective caution sign: 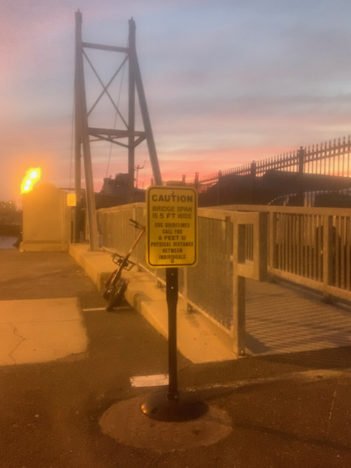 For those who can’t read the blurry text, the sign is warning that the bridge to the right is only five feet wide.  “CDC guidelines call for 6 feet of physical distance between individuals.”  Therefore, anyone who uses this bridge—a foot narrower than it should be—is running the risk of catching the coof in passing. 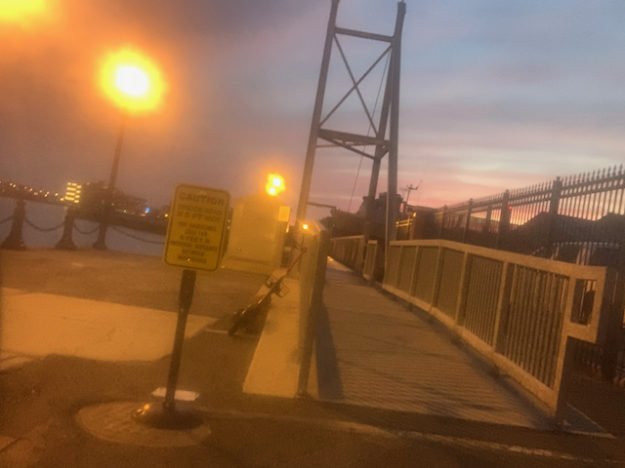 This sign and the decals around the Capitol show such solicitousness—the sign quotes the CDC, for crying out loud—that, even if we fault the federal effort in relation to the various cities and states deemed COVID hotspots, we can hardly say they were complacent on federal lands.  Shame there are so few tourists to abide by the cautionary choreography.  They’d be fun to watch.

PrevPandemic parklets: how a large city and a beachfront town test people’s willingness to walk.
Dirt spills onto Instagram.Next