Luxor Las Vegas: an architectural and structural marvel, if you don’t notice the dust swept under the rug.

Does anyone remember when the Las Vegas Strip was best known for its relentless and elaborate barrage of light displays on all the buildings and their signs?  Chances are, if you’re under the age of 25, the answer is a resounding “NO”—at least not from firsthand experience.  Maybe you get a sense of how things were from a vintage movie.  But, with a few casino holdouts keeping the tradition alive, the Strip has evolved so that it’s less about the luminescence itself and more about what gets illuminated: the massing and architectural distinction of the many mega-resorts and casinos that continue to line the Strip.  The razzle-dazzle owes more to the spectacle conveyed by whatever the structure is trying to evoke, a theme that largely governs the interior design and programming of that casino.  Function follows form.  It’s been this way for quite some time, but a few buildings on the Strip have set the stage for this evolution toward themed resorts, and among the first to usher in the new era was Luxor Las Vegas. 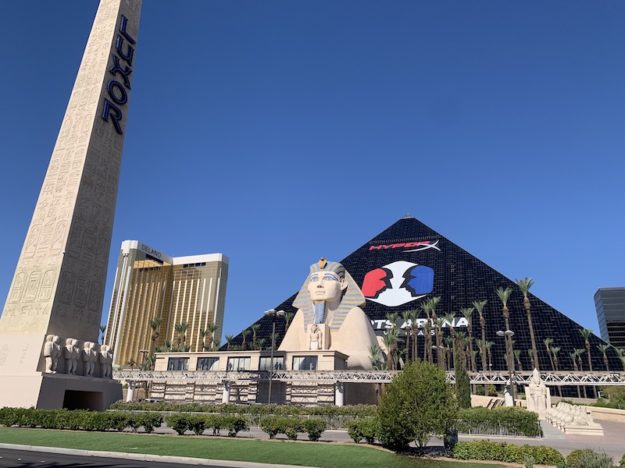 Opening in fall of 1993 to international hoopla, the pyramidal Luxor was at the time the tallest structure on the Strip.  (Technically, the Luxor and many other prominent casinos along the Strip–Las Vegas Boulevard–are in the municipal boundaries of Paradise, Nevada, rather than Las Vegas itself.) Evoking all the visual associations of ancient Egypt, the resort hotel also reinforced the shift in Las Vegas’s gaming industry away from exclusively casinos and adult-oriented entertainment to a more ecumenical, family focus—an approach that echoes that of Excalibur Hotel and Casino in the block immediately to the north.  Since the Luxor’s opening, its owner (originally Circus Circus Enterprises, renamed to Mandalay Resorts Group, then purchased in 2005 by MGM Mirage) has buried many of the Egyptian flourishes under iterative renovations and upgrades, the most significant coming in 2007: a near complete reinvention less than fifteen years after opening.

Almost thirty years in operation, Luxor Las Vegas is a middle-aged—perhaps even elderly—resort casino by the city’s standards.  But it has an above-average number and array of performance venues, and the novelty of the design still gives it clout as a destination hotel.  The numerous renovations to the interior’s common space endow it with a freshness it would likely struggle to maintain if it continued to devote undue aesthetic attention to the faux Egyptian motifs, which were no doubt ersatz and tend to date quickly once the novelty wears.  Having visited one of the hotel’s bedrooms, I can say quite confidently that they have received little or no upgrades since the 1993 opening; though well-maintained and comfortable, the bathroom fixtures look very dated, while the furniture shows some evidence of wear.  But, taking the amenities into account—an esports arena, all-ages and adults-only shows, and four swimming pools, among other things—most evidence suggests that Luxor Las Vegas is doing just fine. 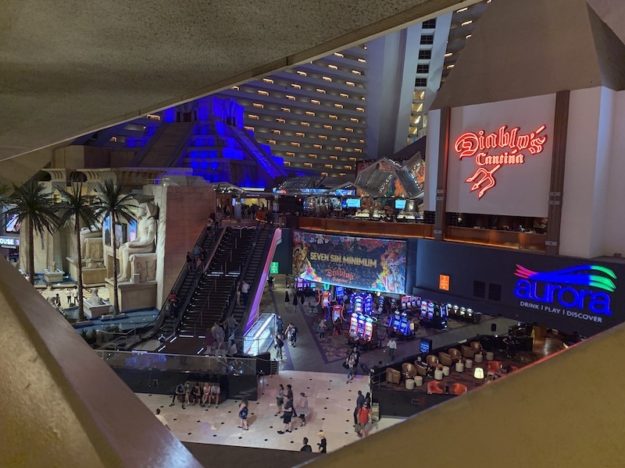 There’s no question that the very scale and novelty of the pyramidal atrium continues to give Luxor a certain wow factor.  That’s the intended purpose of most Las Vegas casinos and resorts.  And the retention of a few Egyptian bric-a-brac (probably the most elaborate and costliest installations, like the Sphinx) ensures that Luxor hasn’t fully suppressed its signature brand. 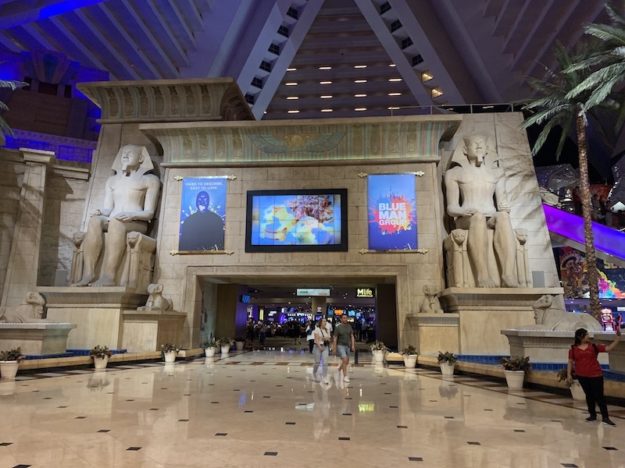 Rarely have any of the large-scale casino developments over the last 30 years deployed an architectural approach that isn’t unique.  That’s entirely the point of Las Vegas: a meretricious, almost carnal appeal to the senses.  So why shouldn’t the hotel deploy 39º incline elevators from the angular base up to the 30th floor?  After all, if all the elevators clustered at the apex—the most efficient way to use a conventional elevator—some of the atrium’s best real estate and its most essential viewing area would both get sacrificed to transportation infrastructure and corridors.  Besides, placing all elevators at the central point below the apex would require a tremendous walk to the various corners.  The architects’ decision seems wise, since it allows a tapered series of mezzanine for optimal viewing potential, featuring countless distinctive perspectives that make those jaunty angles palpable. 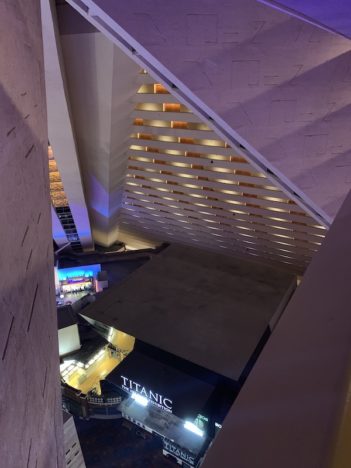 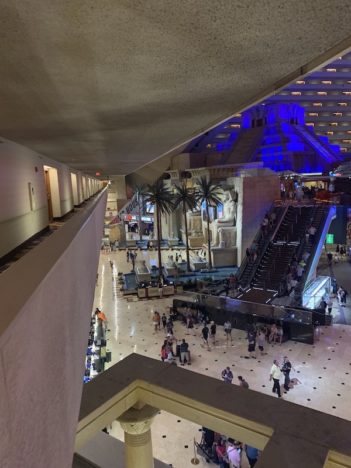 But these balcony views also expose some of the aesthetic deficiencies to the design of Luxor.  A renovation would take care of a few of them, like the narrow, drab, seemingly endless hotel corridors (especially on those lower levels), adorned with surprisingly conventional, boring wallpaper. 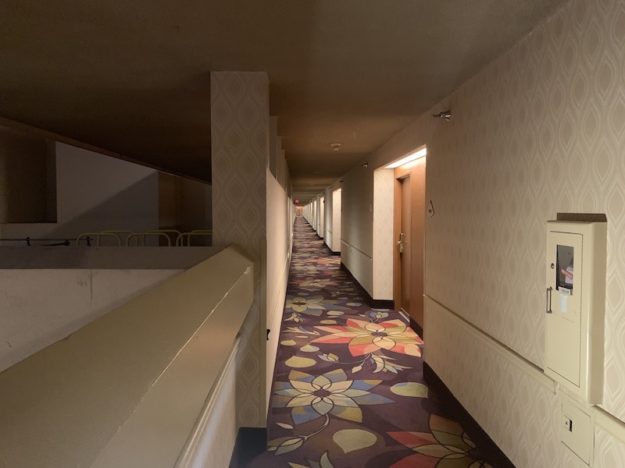 Then there’s the much more difficult aesthetic challenge: the platforms that complement the mezzanine, no doubt providing structural support but forcing the hotel guests to confront some unsightly, unmaintained areas that offer stark contrast to those magnificent atrium views.  I mean, who really wants to see stuff like this? 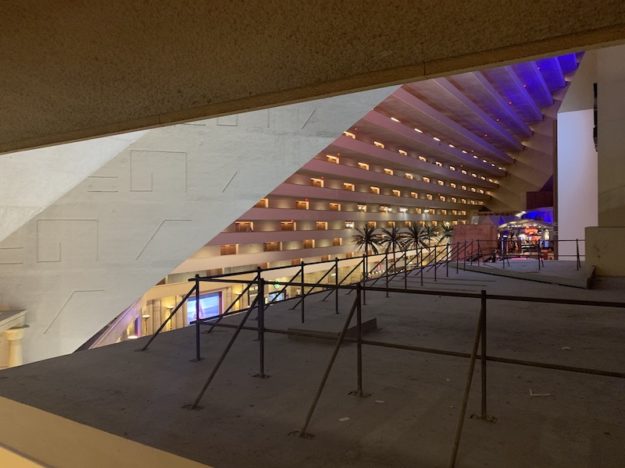 I believe this is the roof to one of the performance venues, all of which consist of boxy structures that rest within the interior atrium, with direct access from either the first or second floor.  Through the vertical length of each auditorium, there’s little to see from the hotel’s balconies but a side wall. 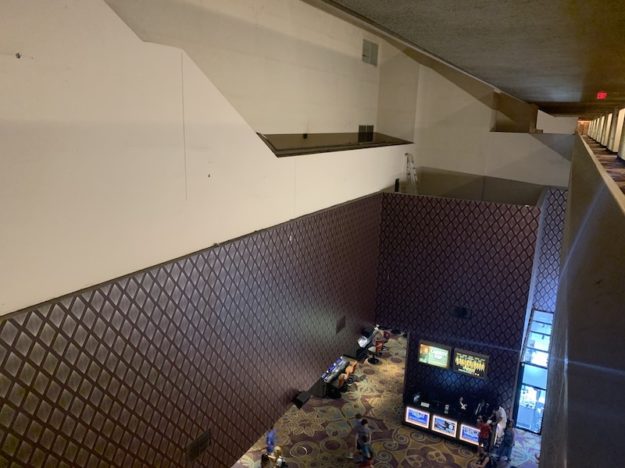 That is, until you get above it all.  By the time you’ve reached the fourth or fifth floor, then there’s just an unsightly rooftop. 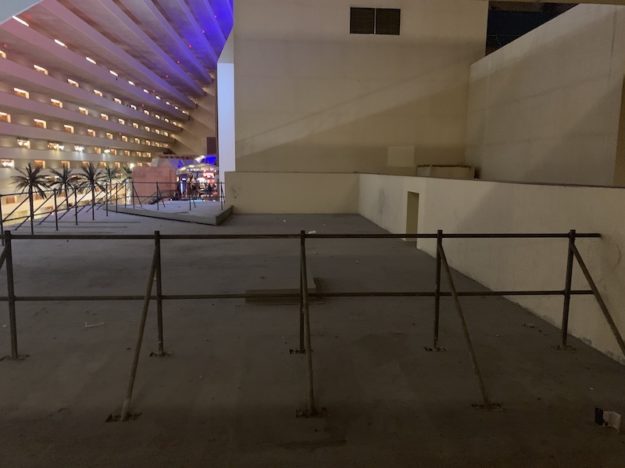 The developer either skimped on an interior design, or the architects failed to convey the appearance of this space, perhaps because they didn’t think of it as much.  They may not have thought of it at all.  It’s neglected and filthy.

And it’s all over the place. 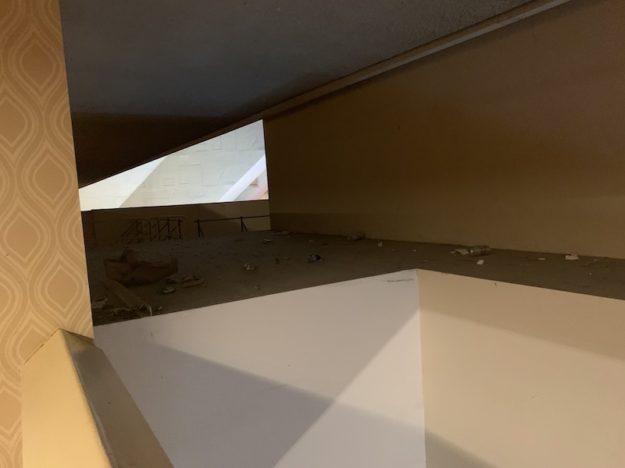 It’s the area we’re not supposed to see.  Within or adjacent to most cities’ downtowns, there’s a certain no man’s land with a concentration of uses that are necessary for the city’s function but in no way are attractive to the eyes.  These “backstage” parts of the city often feature water and wastewater treatment, electrical substations, vehicle impound lots, logistics and warehousing, and adult oriented businesses.  Their proximity to the center stage activities ensures efficient operations in an area typically replete with dense, concurrent economic activity; these uses are part of the chain of transactions that constitutes such activity.  Sequestering the backstage from the front stage is desirable but only feasible within reason, since the greater spatial distance between them, the more it vitiates the sound and productive function of the front stage.  And these backstage districts are part of the standard public road network.

Large commercial buildings have these backstage areas too: the boiler rooms, HVAC, waste collection/disposal, unloading, storage.  It’s easier to sequester them from the public; a simple “Personnel Only” sign is enough, and the capacity to restrict access in private buildings, coupled with lockable doors, ensures that they remain out of sight and out of mind to most patrons.  But that’s the problem with Luxor Las Vegas: it has these nether-regions that are neither front nor backstage but simply exist as part of the residual from other design decisions conceived within an ungainly pyramidal massing that intrinsically results in huge, acutely angled volumes with little functional use or capacity to engage.  And so we get these platforms of litter and neglect. 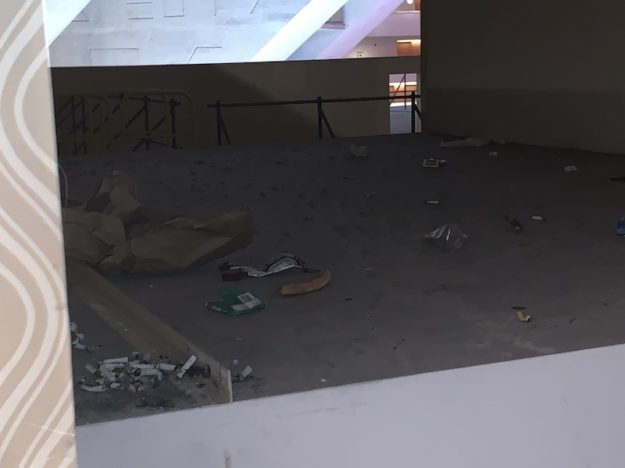 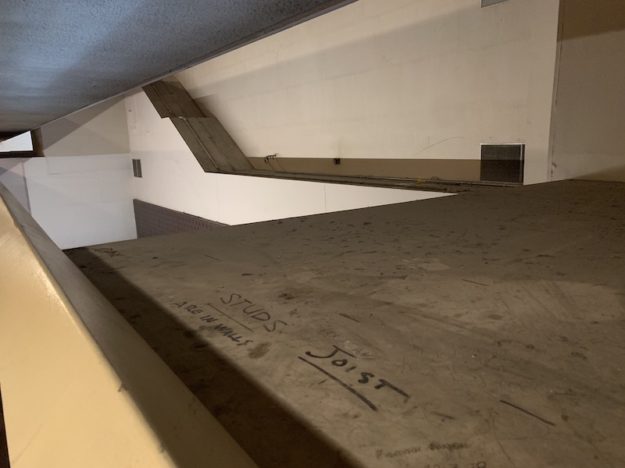 Seriously: are we supposed to see “STUDS” and “JOIST” inked on plywood while casually peering over the balcony from the hallway?  It doesn’t matter.  We see them whether we like it or not.  Of course, we’re not supposed to scrutinize these things.  Too bad people like me exist.  Sorry.

But the photo below effectively captures this dichotomy: 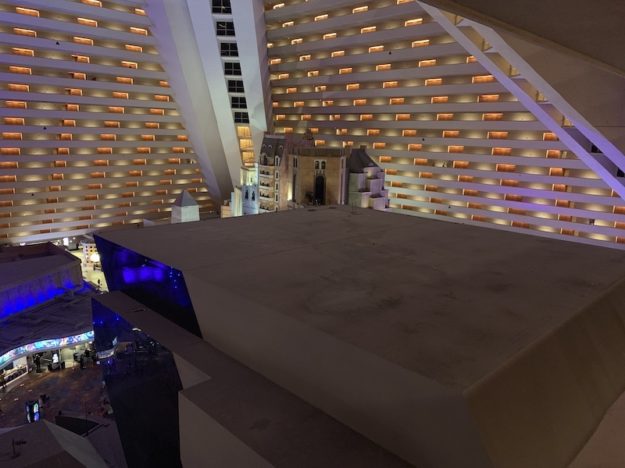 The careful placement (and methodical maintenance) of the lighting against that angled backdrop creates a background effect so intriguing that it helps us forget the blandness of the unadorned, shadowed horizontal plane in the foreground. 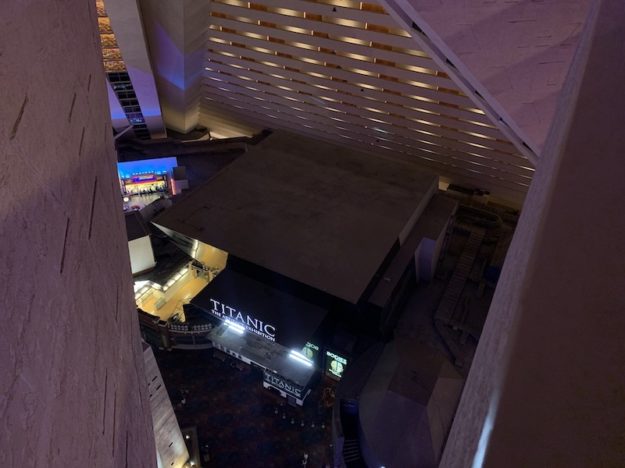 By and large, the effect still works.  But it still puts this backstage architectural feature in a more prominent position than should ever be desirable. 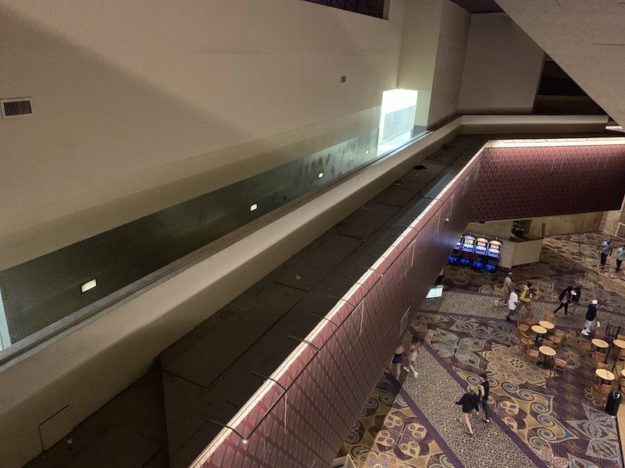 And it very obviously exposes these neglected nooks and crannies to the same vulnerabilities espoused in the Broken Windows Theory: spaces that clearly receive little attention and care are subject to abuse, and once the first signs of abuse become apparent, others see this as a signal to engage in further abuse.  Passers-by might not be able to reach these platforms enough to tag them with graffiti, but they can fling trash. 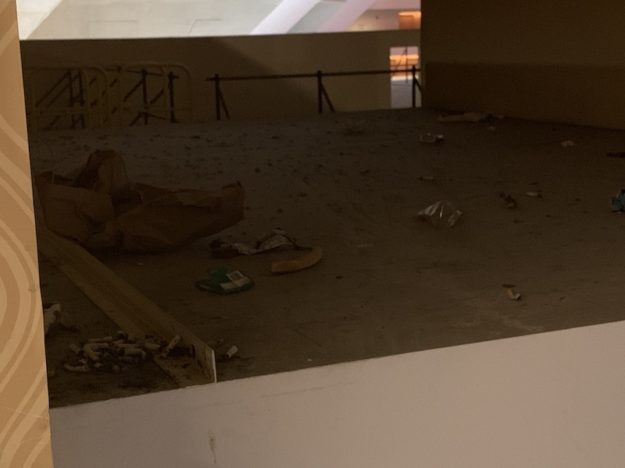 The appearance is so unsightly that I suspect the only thing preventing them from attracting vermin is their distance from the ground level and the fact that more lucrative human detritus is closer within reach.  But I’d question whether these horizontal planes even support human weight, which would make regular cleaning almost impossible.

I generally hesitate to create what might seem like a Negative Nancy analysis, which is why I tried to begin my write-up on the Luxor with a detailed acknowledgement of its many achievements.  From a structural engineering standpoint, it is almost certainly a marvel: at the time of its conception, it ranked as one of the largest metal-glass undertakings in the world and featured the largest atrium.  It also set the standard for most subsequent casinos on the Strip by adhering toward a uniform theme, capturing the essence of a distinct place and time that has resulted in the diminution of glitzy moving light displays, replaced with floodlights emphasizing the grandeur and distinctiveness of each building’s architecture.  It’s easy to forgive its shortcomings.  But still they linger, not even hidden in plain view.  But then it’s Vegas: if we’re focusing on inconvenient details rather than soaking up the big picture, we might as well carp in an entirely separate article over the inauthenticity of the Egypto-kitsch.  I’ll let someone else be the killjoy.

13 thoughts on “Luxor Las Vegas: an architectural and structural marvel, if you don’t notice the dust swept under the rug.”