Among the business enterprises that faced the most stringent of restrictions throughout the COVID-19 pandemic were health clubs and sports/recreational facilities.  Viewed through the prism of contagion, this injunction on gyms during the lockdown generally made sense: they routinely bring people together in close proximity (whether locker rooms or aerobics classes); they allow patrons to share weight and cardiovascular equipment with minimal sanitation after use; such heavy physical activity can induce heavy perspiration and respiration, thereby spreading bio-droplets; and many health clubs operate in facilities with minimal ventilation or exposure to natural sunlight.  Therefore, it should come as no surprise that by mid-March, most states had mandated closure of health clubs, gyms, and major sporting events; by the end of the month, the nation’s largest fitness chains opted to suspend operations indefinitely, prompted no doubt in their interest in avoiding liability.  By late April, a few acts of civil disobedience emerged, especially among the owners of mom-and-pop or regionally owned gyms, but health clubs as a general rule remained shuttered for the entire spring season, and now, as states are rolling out re-opening plans, gyms and health clubs are just beginning to open back to the public, weeks after many other services such as restaurants and retail.  The national health club chains are aligning their reopening with state-by-state directives.

The hiatus for health clubs prompted many fitness-minded individuals to pursue alternative means of exercise.  Running and jogging proved a particularly low-risk cardiovascular activity; empirical evidence suggested that its popularity expanded dramatically.  Across the country the high number of people out running on sidewalks, greenways, and multi-user paths was easy to spot.  Bicycling also experienced a similar surge in demand; it’s not common to see lines out the door at various cycle shops, and many manufacturers now have wait lists for bikes.  Other health-conscious individuals got creative: with the MLB season canceled or at least significantly postponed, the massive staircases at empty ballparks beckoned the fitness mavens for their cardiovascular opportunities, while the metal railings and fixtures could serve as anchor points for people who engaged in strength training with resistance bands.

Now, approximately three months after the lockdown first went into effect—the lockdown that eventually expanded to most of the country—we witness the incremental relaxing of these stringent standards.  And while health clubs are beneficiaries of this phased re-opening, the “super-spreader” conditions listed above have subjected them to a slower resumption of operations than many other service-oriented commercial establishments.  Unlike most retail—where we purchase a product to take home—or restaurants—where we consume on-site a product prepared to our specifications—at health clubs you pay for the privilege to use a series of products on site that the proprietor maintains.  It’s not retail at all; it’s much riskier.

Though not as stringent in Virginia as the District of Columbia, the national gym chains have begun to re-open within the last few days.  I’ll withhold the name of the health club featured here (it’s only fair, since I only took photos and didn’t really use the facilities), but it’ll probably look familiar to many since it’s a widely known chain.  And here’s Phase One for health clubs in Virginia: 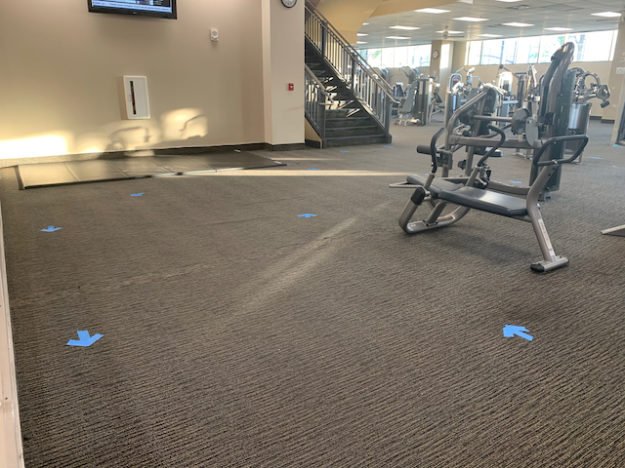 I think most of us who congregate among the living have seen the arrows on the ground before, since they’ve become commonplace in supermarkets in an attempt to encourage unidirectional travel down the aisles.  I have yet to see enforcement though.  In a health club they seem a little excessive, given that there’s usually easy opportunity for lateral movement among rows of equipment.  Regardless of their utility, no one can claim that these arrows over-estimate the gym patrons’ intelligence. 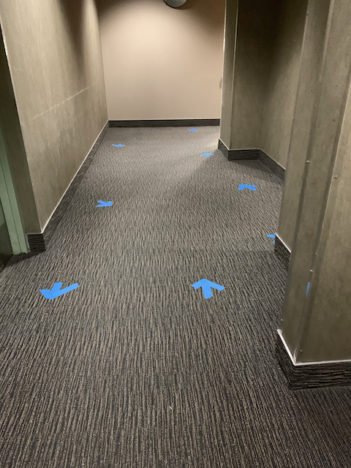 Aside from the colored tape on the floor, the most common distinctions of this health club from before COVID-19 are the smiley face signs scattered throughout. 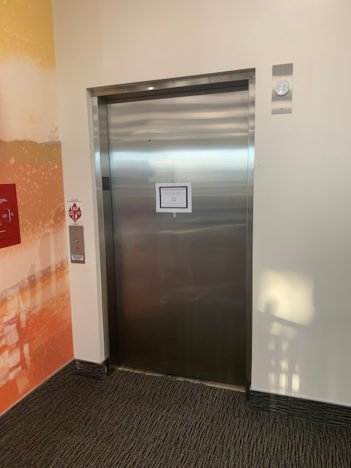 The smiley on that elevator indicates only one user at a time.  And the cardiovascular equipment is replete with cheery admonitions. 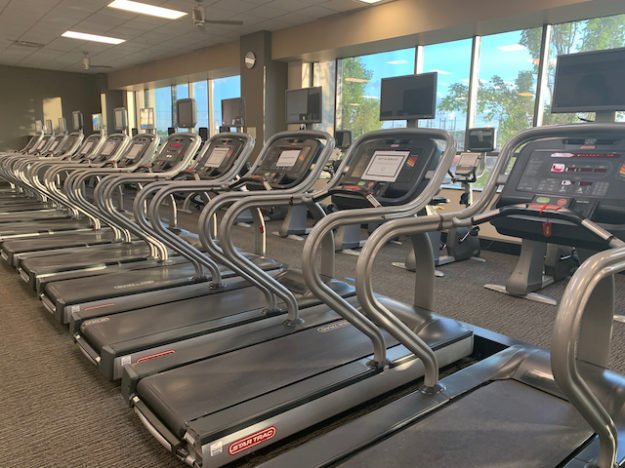 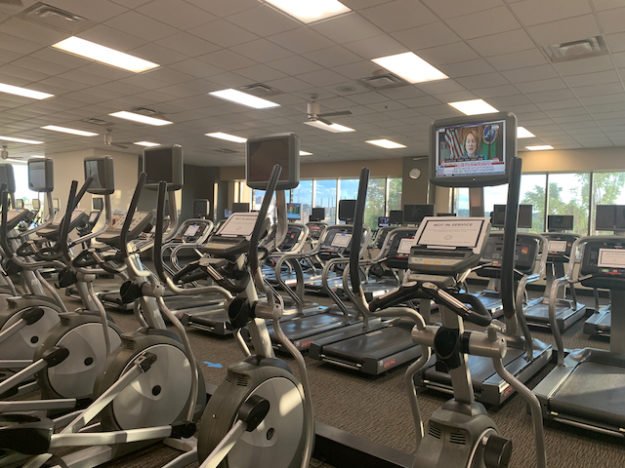 A staffer at this gym indicated to me that most health clubs were subjecting their cardio equipment to stricter limitations than the weight machines, due apparently to the higher risk of spreading COVID-19 through heavy breathing and potential coughing that takes place during a high-intensity exercise that leaves one winded.  Running is great when outdoors; on a treadmill it’s an easily transmissible undertaking.  I’d estimate that over 80% of the machines are off limits.

And even though all that sweating is likely to leave most people thirsty, they’re out of luck for the time being. 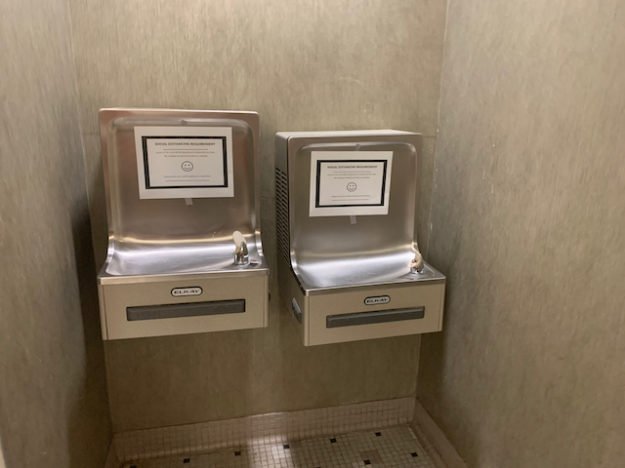 Drinking fountains that dispense water from a spout put people’s mouths far too close to the source.  The health clubs therefore strongly encourage people to bring their own water bottles, because the increasingly ubiquitous bottle-filler fountains (like the one here) are still available, since they lower the risk of unintentional shared saliva.  They are more sanitary and, I suspect, will increasingly replace conventional drinking fountains as the hydrating apparatus of choice if coronavirus fears persist for months into the future.  Other water dispensers promote the predictable level of social distancing. 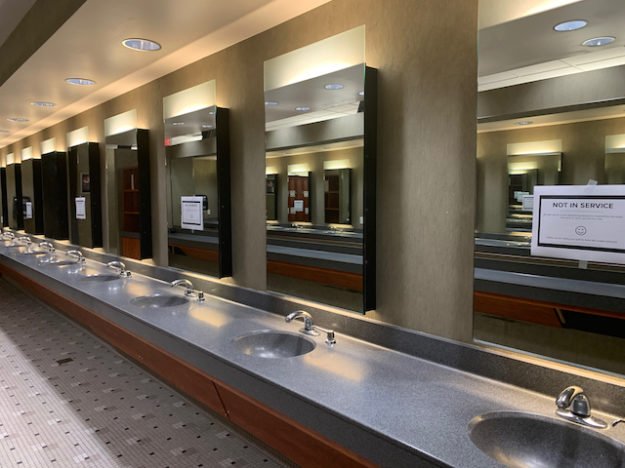 Every other sink is restricted.  Also off limits are the sauna and steam room, but not the swimming pool, which, thanks to the chlorine, is a particularly low-risk, antiviral activity.

But here’s the one that really gets me: 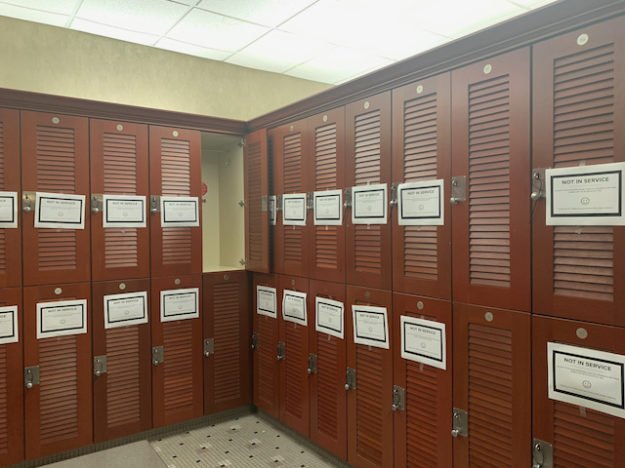 Under normal circumstances, I could have gotten in serious trouble for taking photos in the locker room.  But since the place was basically empty, the odds of enforcement were nil.  And there’s good reason that both the locker room—and these Virginia health clubs—are likely to remain sparsely used for quite some time: 90% of the lockers are forbidden to encourage social distancing, meaning that, if the place gets more than a handful of patrons (no more than three dozen), they will find no available space to store their belongings.  For many people, this could prove a deal breaker: while it’s common for people to fling their possessions in a locker without securing it, it’s far less common for them to just leave stuff sitting on a bench, and the staff at this health club said there will be no other option if the lockers are completely full.  These health clubs offer enough inconveniences that it might deter people from visiting for the time being.  Which I suspect is just fine with corporate.

In summation, though COVID-19 subjected health clubs to some of the most stringent restrictions of any business in the country, they’re now faced with the opportunity to capitalize on these restrictions.  I can think of no situation where regulated maximum occupancy helps a restaurant or even a retailer: if the typical eatery can only host 25% of its normal seating, most will not be able to turn a profit.  But health clubs have already locked in their membership fees: while most had to suspend those fees during the pandemic season, they can now resume charging members full price while only allowing a fraction of the equipment to get the level of use.  This prohibition only stands to benefit the health clubs, because the inevitably light patronage means less water consumption, no hand-towel service (and no laundry), reduced use of paper towels, and less overall wear and tear on the equipment.  Sure, some people (possibly quite a few) canceled their memberships during this time, but a health club’s dependence on monthly dues means they have no incentive to pack people in.  In fact, it may be better for the profit margin if few people show up, as long as they keep the membership going.  This may be a great way for the national chains to recoup at least some of their losses from a full quarter of suspended operations.  Then again, if enough people purchase home gyms, the health clubs may prove another COVID casualty, right up there with department stores, rental car agencies, and movie theaters.  We’ll just have to use the great outdoors to keep us entertained.  I shudder to think.

PrevLuxor Las Vegas: an architectural and structural marvel, if you don’t notice the dust swept under the rug.
Empty airport: the consequences of a corona-driven collapse in air travel (MONTAGE).Next