Empty airport: the consequences of a corona-driven collapse in air travel (MONTAGE).

Less than a month ago, I availed myself of a long-planned opportunity to travel from the mid-Atlantic to the Midwest, using a flight a purchased several weeks before the world’s reaction to the coronavirus pandemic had set the turbulent economic and social course for 2020.  Obviously there are others before me—people who took this risk for far nobler reasons than mine, even during the peak of the outbreak—but I’d like to think I’m still part of a select group who opted to fly while the perceived risk of COVID-19 spreading remained quite high.  And the photographic evidence of the four airports I visited across a single weekend at the end of May bears this out.

Chicago O’Hare International Airport (ORD), typically one of the busiest in the world in terms of annual passenger traffic (it was #1 in the 1990s) didn’t look that strange…for people unfamiliar with the place. 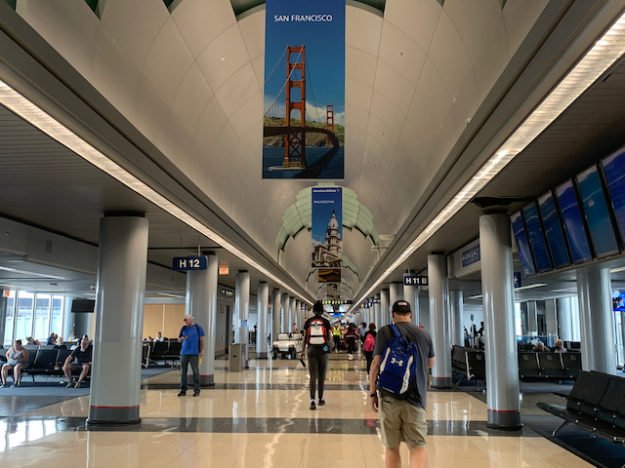 But this definitely is more befitting an off-peak time during the day, like late morning.  Not 4:30pm on a Friday.  It should be slamming.  And so should the food court. 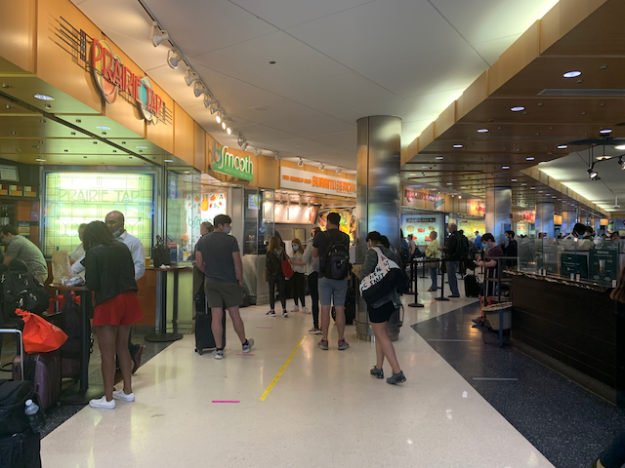 The demand for chow is obvious, no doubt reflective of the people at ORD on a layover—a common situation for this American Airlines hub.  But is it really that busy, given the time of day?  No.  It’s practically an empty airport.  The loosely enforced social distancing measures may actual create the illusion of a bustling scene, because there’s human activity taking up a considerable percentage of the floor space.  But it’s much more rarefied than usual, so if these people were queued up with the normal distance between them, the paucity of customers would be obvious.  I was surprised by the crudeness of the markings on the floor. 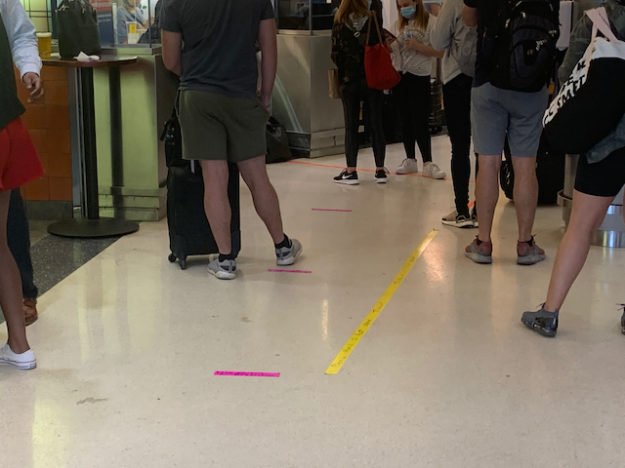 Not much better than colored duct tape.  (In fact, that may be exactly what it is.)  Couldn’t a high-rolling entity like O’Hare afford some more legitimate looking decals?  In fairness, other parts of the empty airport had more official looking decals, but why wouldn’t management encourage a centralized, uniform approach throughout the premises?

Meandering around the ORD terminal a bit more, the precipitous drop in air traffic caused by the pandemic became more noticeable.  I’d wager that 75% of the eateries were closed. 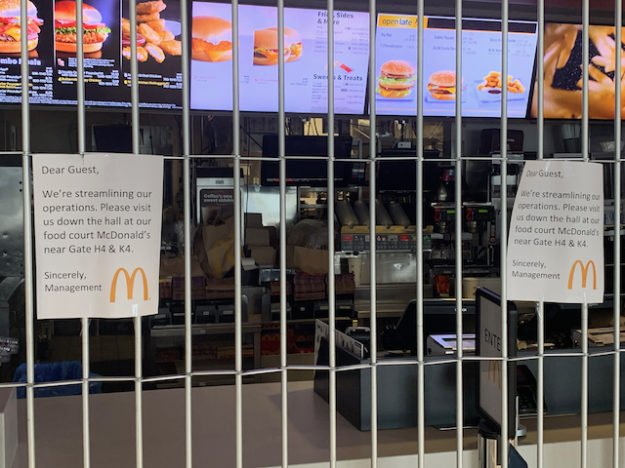 The ones that remained kept somewhat concentrated, which is probably more advantageous to the airport management (less space to maintain each day) but unwise from a public health standpoint, since it creates greater opportunity for concentrations of people.  Then again, it was probably hard for most restaurants to justify staying open, and I suspect they only operated at about one-third their normal capacity.  As the afternoon crawled toward evening, the sparseness of the empty airport grew apparent.  Imagine the next four photos taking place at roughly 15-minute intervals, from 4:45 to 5:45. 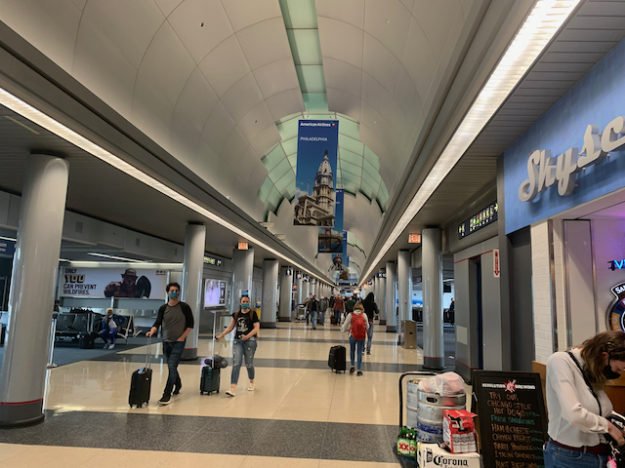 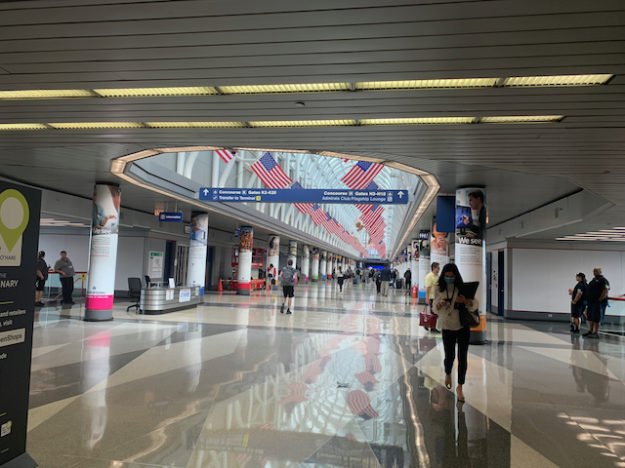 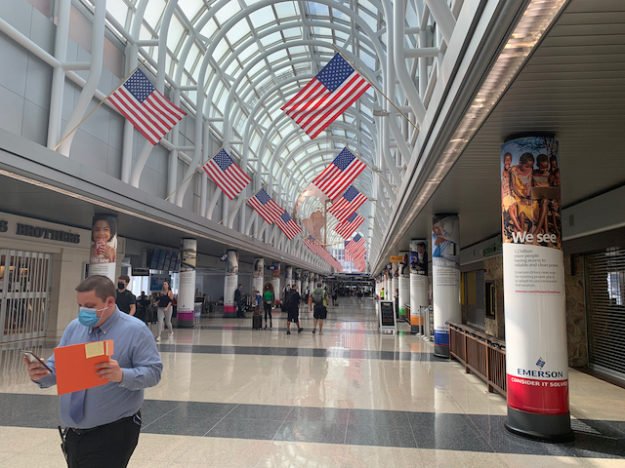 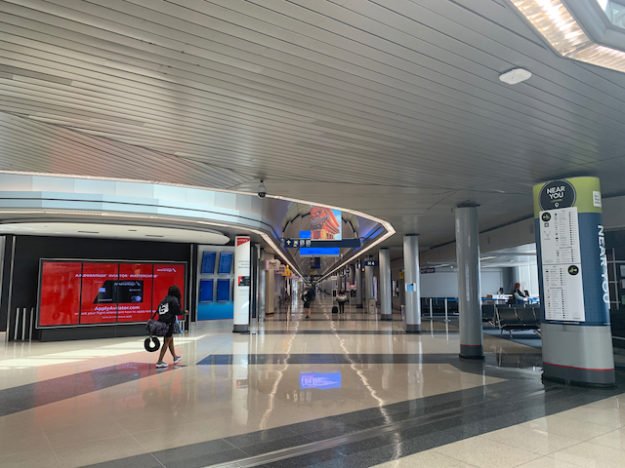 Not only did the airline industry concentrate its flights spatially (in a cluster of gates around a single concourse or two), but temporally (a peak few hours during the day).  By 6:00pm on a Friday, it was obvious that ORD was winding down.  Just look at the schedule: 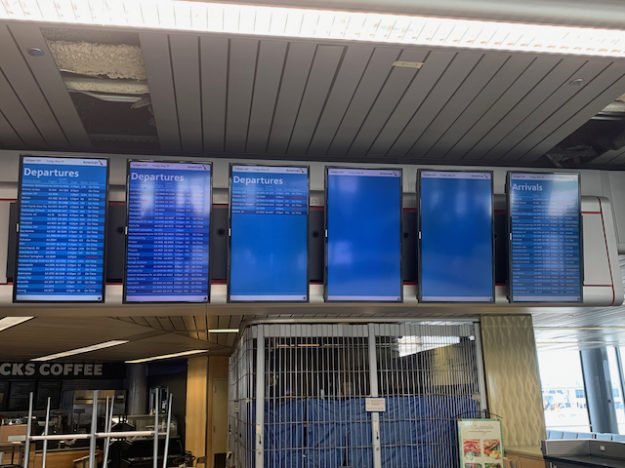 It goes without saying that a considerably smaller empty airport like Indianapolis International (IND) would look almost abandoned.  It’s not a hub, and, outside of charter flights to cities like Terre Haute or Evansville, layovers are rare. 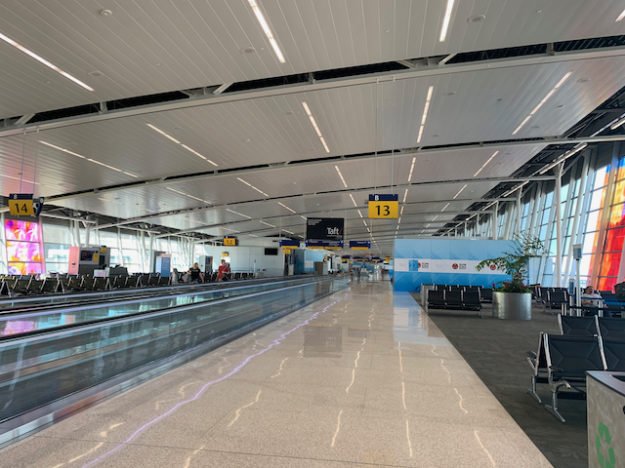 But that’s where things get interesting: the four flights themselves showed variable efforts at social distancing.  My early flight from Washington DC was suitably spaced, with essentially one person in each row of seats on each side of the aisle.  It was a noble effort, and I can hardly imagine it was profitable for the airline.  But the return flight to the nation’s capital was more than half full; meanwhile, the flights into and out of IND were over 90% full.  Neighbors on either side of me.  However, we received no food or drink service on these puddle-jumper flights, and the face mask enforcement was stringent: if people took off their masks for more than a few seconds, the flight attendants were there to remind them to place them on again.

Charlotte Douglas International (CLT) was a different story.  Another hub for American Airlines, it was surprisingly brisk. 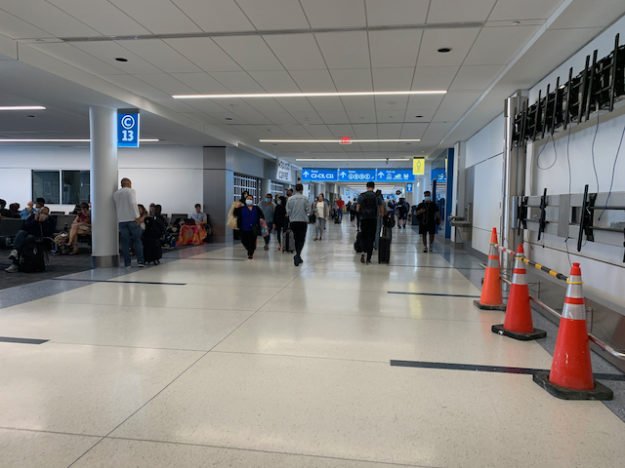 With a layover in the early afternoon, I again suspect this was more the peak time and the clustering of people in a handful of gates in a single concourse. 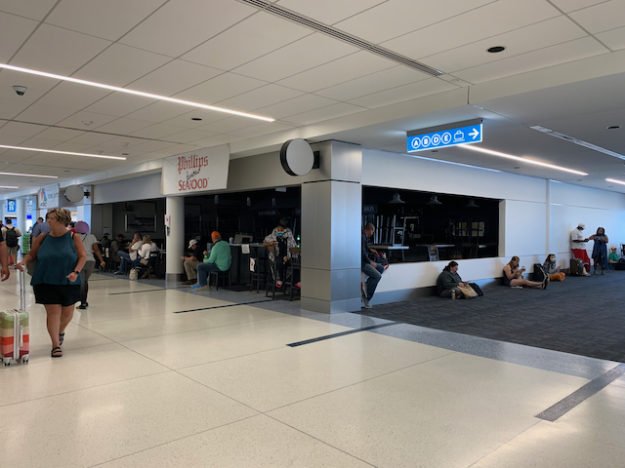 Note the social distancing of people on the floor; chair space was already completely occupied, given that people instinctively avoided sitting next to one another.  And the closed Philips Seafood restaurant had morphed into overflow seating from one of the adjacent restaurants that actually was open.  Also intriguing was the comparative absence of scheduling monitors, almost like management at CLT had ripped them out of their fixtures on the wall. 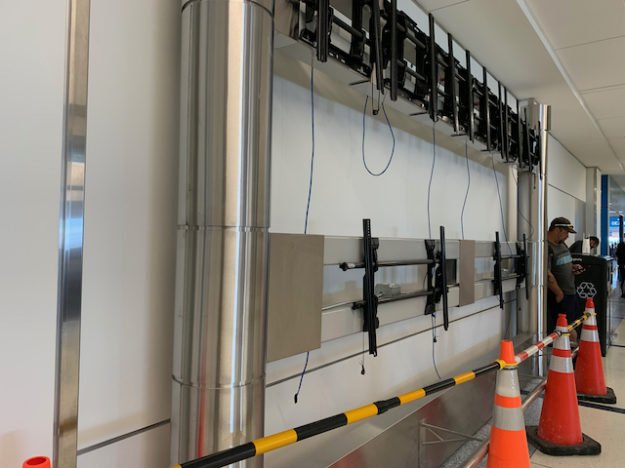 But the crowning achievement in airport desolation comes from Ronald Reagan Washington National Airport (DCA).  Taken in the early afternoon on a Friday, I had never seen anything like it.  Here’s the main hall for Terminals B and C. 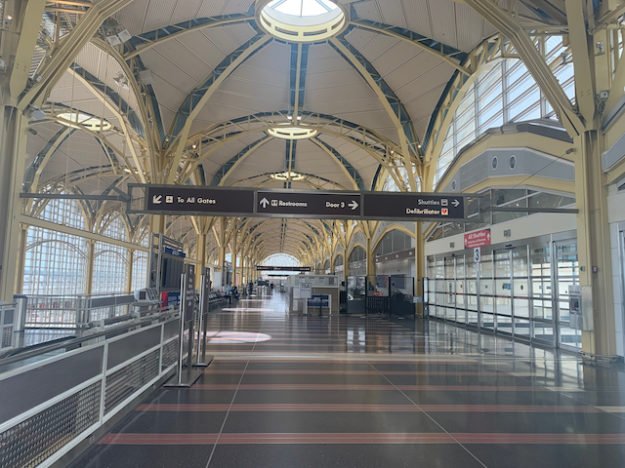 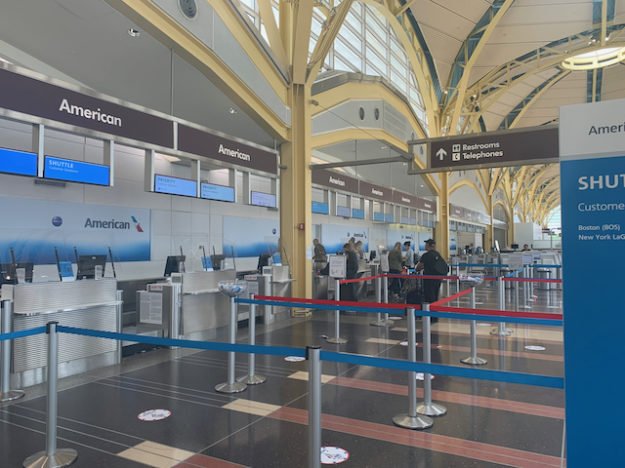 This degree of emptiness in a building fully serviced with HVAC and electricity could not help but remind me of a dying high-end mall.  (Cue the hypnotic vaporwave soundtrack.)  Either I arrived at DCA during a period between peaks, or travel out of this very centrally located airport has dropped even more staggeringly than most.  Needless to say, all the conventional retail outlets at this virtually completely empty airport were closed. 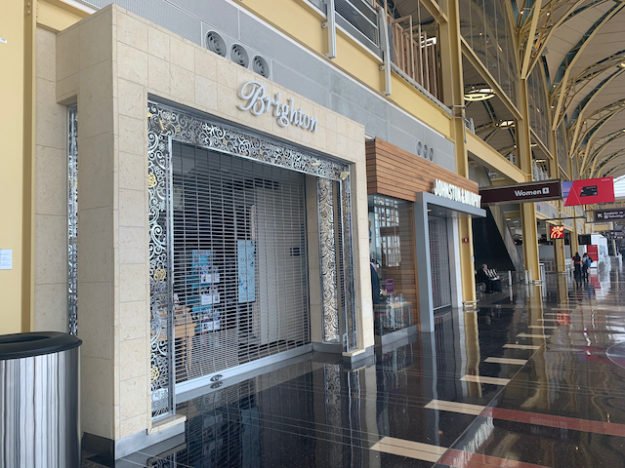 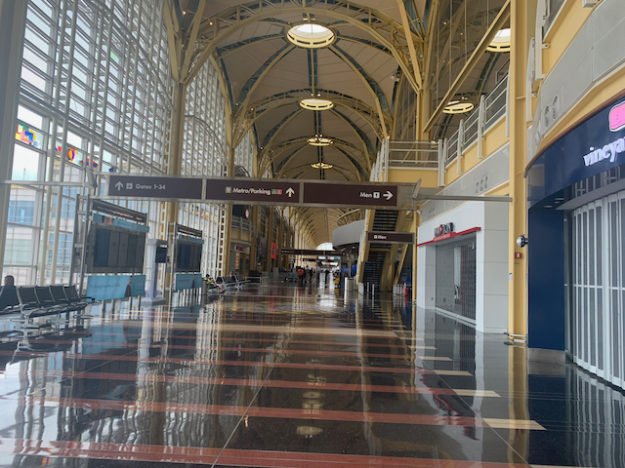 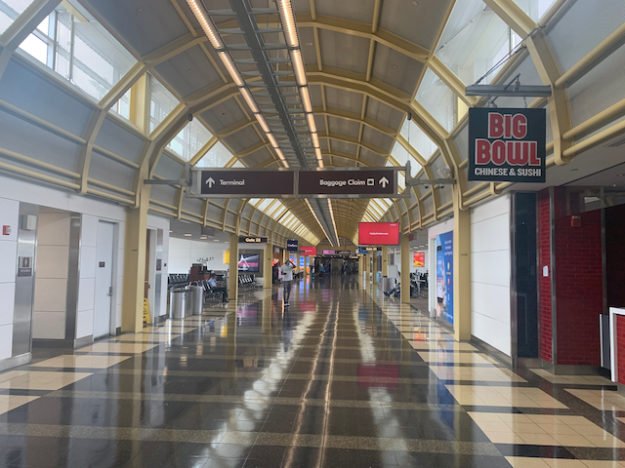 But even as I strode down one of the main concourses, the narrower corridors and slightly higher crowd volumes did nothing to dispel the void.  Again, most restaurants were closed, including this location of Taylor Gourmet, a DC-based chain that collapsed to nearly nothing a few years ago. 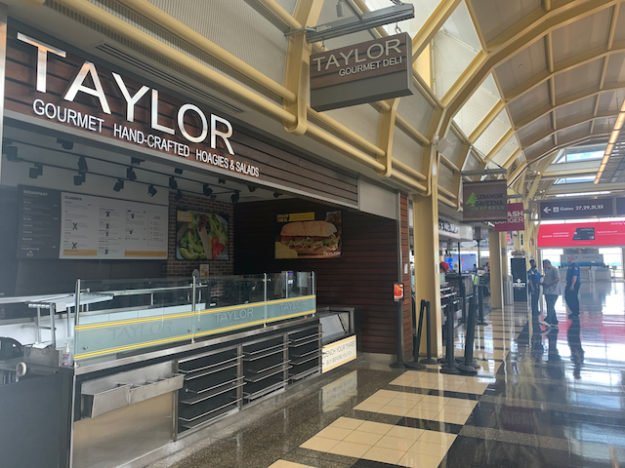 I didn’t see stickers on the floor, but, queuing up at the few operative restaurants, most people seemed respectful of social distancing measures.  Not that it was hard for them to honor the requisite six feet in such an empty airport. 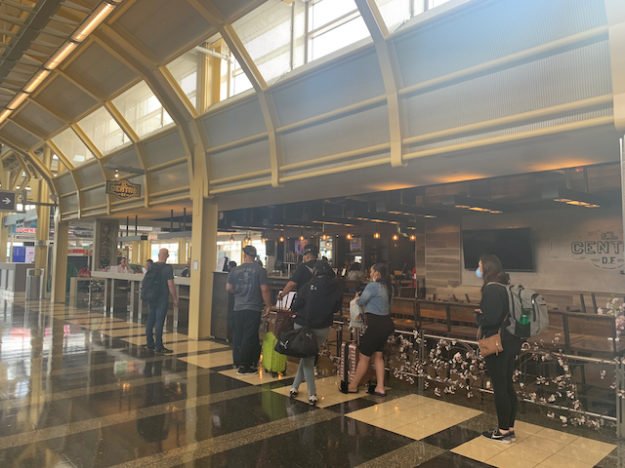 And, as was the case at ORD, overflow seating spilled out onto the closed restaurants. 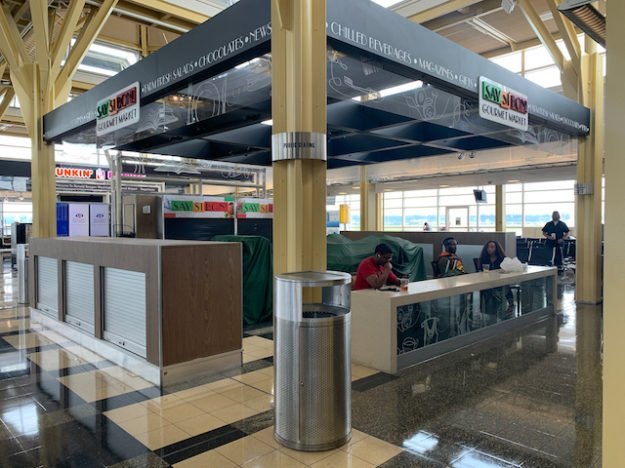 Those functional restaurants with table service most likely were strictly enforcing the use of every other seat.  With no major effort. 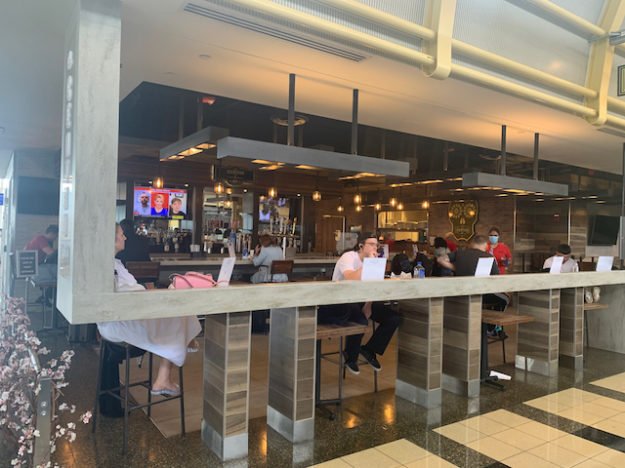 The practice extended to the seating at the gates: no restrictions to promote distancing, and no one felt compelled to sit on the floor, as was the case at CLT. 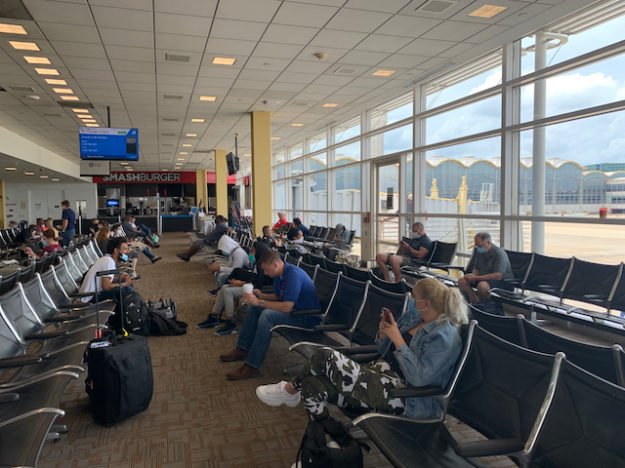 My flight out of DCA was probably less than 15% full.  I’d suspect that, under normal conditions, that level of occupancy would prompt an airline to reschedule a flight, merging it with another to ORD that same day.  But the empty airplane was already the product of a rescheduled flight, and I had investigated what my alternatives were: absolutely nothing that day, the day prior, or the following day.  And the evidence is in the digital scheduling: 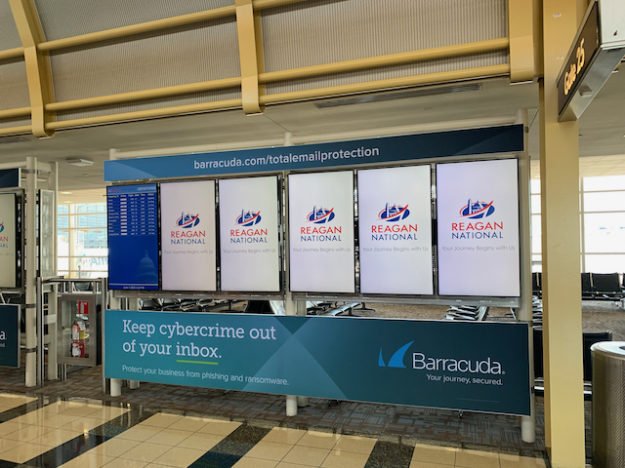 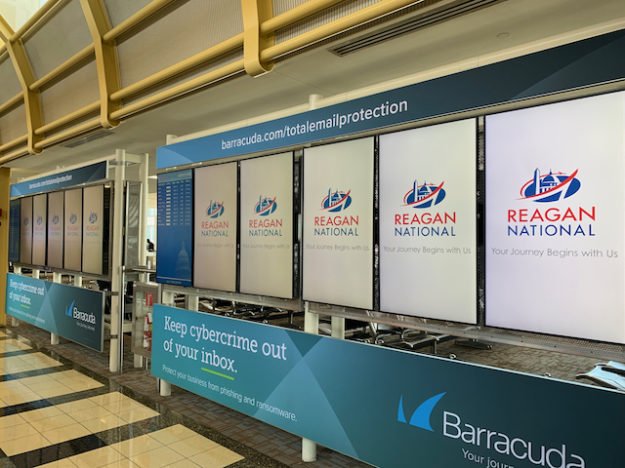 Less than one-sixth the normal traffic at that time.

This is not a sustainable condition for the airlines, the concessions (restaurants/retail), the services, the airports themselves.  It’s even proven devastating for attendant industries like auto rental; virtually all businesses dependent on the tourist and hospitality industry have gone dormant, and many will not recover.  And, judging from my experience at four different airports, I see little evidence of a uniform approach toward managing the minimal passenger flow to promote social distancing.  IND never seems all that busy even on a good day.  ORD was forcing people into a cluster of gates and concessions, making them somewhat concentrated against better judgment, while CLT showed little effort at all toward doing anything other than concentrating people to eschew maintenance needs for the rest of the terminal.  Frankly, only DCA promoted a culture of concern throughout the experience, up to and including the flight itself.  But this is a devastating financial model for the airline, and the empty airport condition may have more to do with DCA’s prominent role in domestic flights: Dulles (IAD) and Baltimore-Washington (BWI) handle more international traffic, even in the best of times.  So DCA’s remaining international traffic may be deflected to the other two airports—a radical move, given the airline industry’s territoriality.  But these are unprecedented times…

…except, of course, that international air traffic has taken an even greater hit, in part by federal orders (both in the US and other nations).  Perhaps DCA’s passenger traffic plunged out of an interest in reducing security vulnerabilities.  If that’s the case, we’re not likely to hear much about the real reason for this empty airport, at least from a reporting perspective.  Regardless of the conditions at the end of May—right before the phased reopening of the country had become widespread—I suspect the airports and airline will need to pursue a more uniform approach toward promoting public health before they can expect a reasonable return to normal levels of passenger traffic.  Loathe as I am to recommend top-down or centralized measures, the immediacy and interconnectedness of airports across jurisdictions (national and international) makes a hard case for letting each airport try its own thing.  One big problem, though, is that the size and scale of airports is so varied that single-handed measures could completely inhibit operability in many cases.  It involves as troubling of a decision making process as deciding essential from non-essential workers, a judgment fraught with evocations of promoting an occupational caste system.  These are decisions well outside my pay grade, thankfully, but I can at least hang around to document their consequences.  From a COVID-19 standpoint, airports right now look more like malls than ever.  Especially the dead ones.

2 thoughts on “Empty airport: the consequences of a corona-driven collapse in air travel (MONTAGE).”