Seasonal displays during crisis: are DC’s cherry blossoms an act of patriotism or funeral flowers?

I’ve always been partial to seasonal displays—to any arrangement of objects, shapes, or colors that defies its backdrop and commands attention simply for being different.  I think, in recent years, it’s become a more common sighting in grocery stores for all variety of holidays, not just because food manufacturers capitalize on special occasions to market a specific festive product—of course they do that—but because the very presence of a holiday gives the grocery store an opportunity to build an eye-catching tableau with the hopes of selling higher than average volumes of the products contained within it.  Avocados (the essence of guacamole) for Super Bowl season, for example.  Department stores have done the same thing with seasonal attire for decades (centuries?).  So why shouldn’t food-sellers join in on the fun?

All the better if the seasonal displays have some regional or local significance.  It may surprise those who live outside of South Louisiana (especially New Orleans), Mobile, Galveston, or St. Louis that relatively few people in the rest of the country could easily identify the signature colors of Mardi Gras.  But those handful of cities that put on a real, multi-day Carnival celebration (not just a dollar-store face mask and a bowl of gumbo on Fat Tuesday) get festooned with purple, green, and gold for many weeks, enlivening the dead of winter with some celebratory warmth.  Meanwhile, my home city of Indianapolis has elevated its largest single-day event (I think everyone knows what I’m referring to) into a month-long celebration of parades, half marathons, and time trials, culminating in the raucous Carburetion Day (“Carb Day”) on the Friday before the big race.  As the month of May advances, many fans deck their homes with the signature checkered flag or a banner with the IMS insignia draped across the front porch.  This year, the pandemic has pushed celebratory season to August, so we’ll see if it gets the same treatment among local race fans.

Then there’s Washington DC, where throughout the spring, homes and storefronts drape their facades in pink. 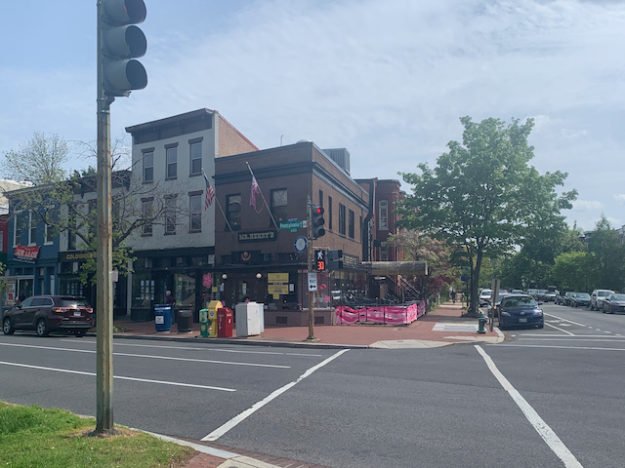 This corner restaurant-bar is hanging on to the pink well past the peak of the celebration (these photos come form late April), but the rosy crepe paper endows the place with good spirits and positivity during a persistently dour time.  After all, the COVID-19 pandemic has put a bit of a damper on the spring-time spirit.  But the colors shine through. 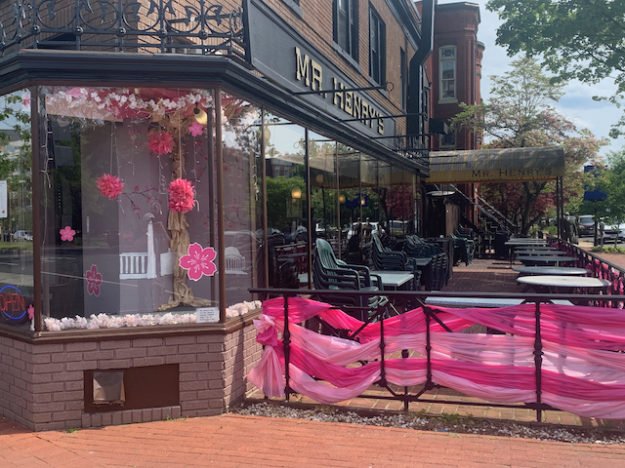 The varying shades of pink—the flower cutouts in the windows—represent Washington’s signature National Cherry Blossom Festival, an 85-year tradition commemorating the the flowering beauty of Yoshino Cherry trees that the US received from the Mayor of Tokyo in 1912, as a token of warming U.S.-Japan relations.  Throughout the peak of the bloom (usually late March and early April), the city hosts a variety of events—a Kite Festival, outdoor concerts, an enormous 10-mile race, a parade, and various cross-cultural activities that fuse Japanese and American interests.

It goes without saying that the threat imposed by the coronavirus pandemic cancelled the events for the 2020 Cherry Blossom Festival. 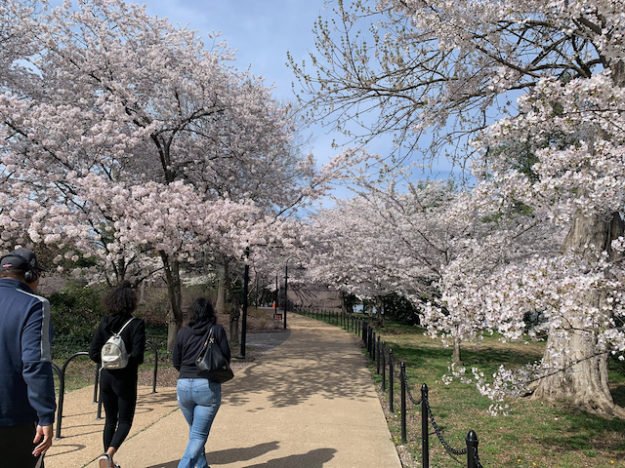 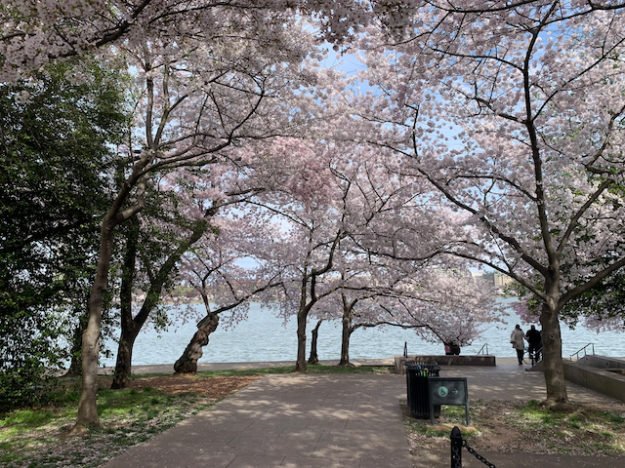 During some of the peak weekends, despite the lack of festivities, enough people arrived in clusters that the City had to restrict access around the Tidal Basin, where the flowering is most abundant.  But even massive road closures haven’t stopped the seasonal displays.  In fact, the relative absence of other things going on makes it easier to notice when a home or storefront really gets decked out.  And the spirit of these seasonal displays extended to local businesses, where it’s common for the purveyors of sweets to offer a cherry-flavored pale pink specialty: ice cream, cupcakes, macarons.  In the absence of other economic activity, it should come as no surprise that local eateries, desperate for carryout business, have sought new ways to distinguish themselves.  In many respects, Washington DC, when faced with a crisis at the start of the cherry trees’ bloom, doubled down with privately initiated gestures of celebratory high spirits.

As we scour the landscape during difficult times for reasons to be optimistic, perhaps it’s high time we recognize that pink in the spring is as much a part of DC’s annual tradition as patriotic buntings are just a few months later.  Though we’re now well into may and the cherry blossoms are down, it’s not hard to notice, when meandering among DC’s oldest neighborhoods, that pink is uncommonly prevalent throughout the blossoming season.  Scattered among the Tidal Basin like Easter Eggs are a variety of shades of pink that offer star contrast to the Yoshino Cherries. 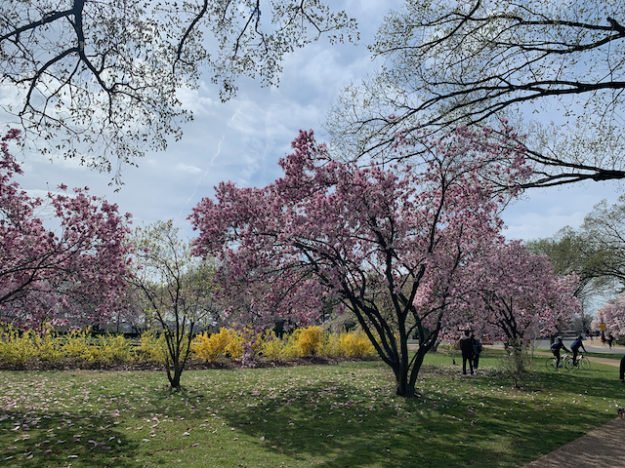 I’m not the most adept horticulturist, but I believe these are part of the tulip family?  Though their blossoms are less pure and dazzling than the cherry, they seem to have greater longevity.  Additionally, the crepe myrtle is one of several signature trees—also imported from Asia—that gives the southern US an added bloom throughout the summer, grabbing the baton from cherries and tulips as they begin to fade in mid/late spring.  And among shrubbery, we encounter lots of this in the city: 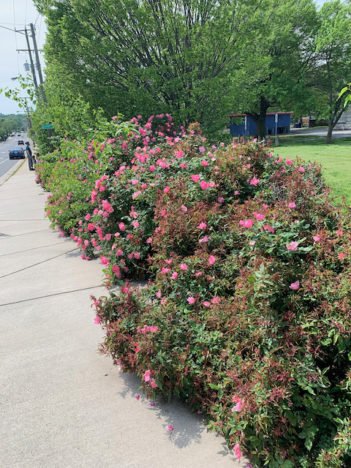 If I were in the Midwest, I’d argue that it’s a peony (my home state’s official flower), though the blossoms here are smaller than I’d expect to see in Indiana.  Still, it claims a longevity on par with the crepe myrtle that allows the spring-like character to extend well into to the dog days of summer.  Lastly, the archetypal southern tree, the magnolia, offers enormous blossoms that trend toward a milky white, but they sometimes venture into pink territory.

In Washington, DC, with its signature front gardens, the horticultural and floricultural elements blend right in with the rest of the seasonal displays.  As we confront the tragic fragility of human life, their resiliency defies the obvious ephemerality of a blossoming season.  Confident that the full Cherry Blossom Festival will be back next year, I have a sneaking suspicion that the decorations and seasonal displays will be bolder and pinker than ever before.

PrevA non-defense of the back alley, from the mean streets of suburban Dallas.
Cause-and-response urbanism in Alexandria: when grafting a storefront is like pulling Nectar from a flower.Next