Within the last 48 hours, the District of Columbia and most of the surrounding counties in northern Virginia initiated Phase One of the release from the lockdown.  Aside from the other reactionary destruction taking place in city centers across the country, this reopening is likely to prove a modest start, and the rhythm of people’s movement through the city’s streets and buildings is unlikely to change that much, at least for now.  Restaurants will remain under limited operability, primarily accommodating carry-out and delivery only.  Those that have generous outdoor seating may be able to devise a configuration that is acceptable for table service, which, truth be told, would barely differ from the way people have positioned themselves in the al fresco dining spaces in the past, waiting in the courtyards and patios of restaurants until they hear their name, indicating that their bagged order is ready for pickup.  Take this example in the DC Logan Circle neighborhood: 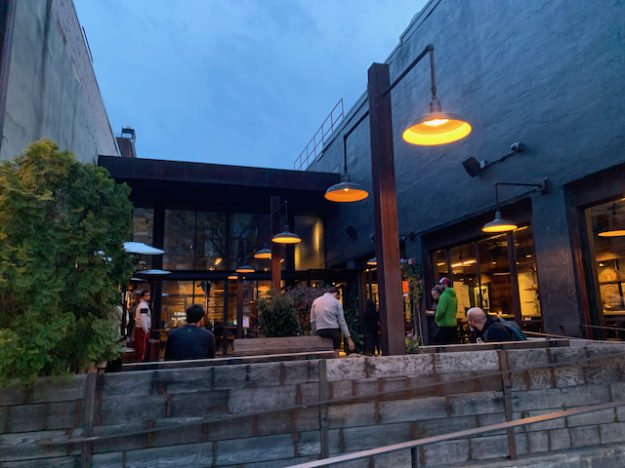 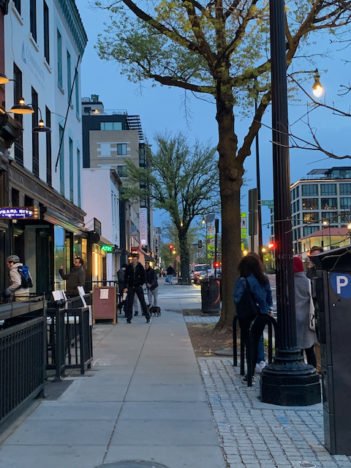 And this comes from late April, a point in time when few if any jurisdictions in the US showed any indication of “flattening the curve”, and all were still implementing their most stringent lockdown expectations.  Essentially, even in April, people were already standing around waiting in a configuration not all that different from the social distancing of this early phase of reintroducing table service and seated food consumption on site.

It may be quite some time before Washington DC is willing to relax its restrictions enough to open indoor seating to any great extent, and even then, it’s unlikely many restaurants will avail themselves of the opportunity.  In regions already open with strenuous restrictions, many restaurants have still retained a carry-out only policy, having determined that the reduced seating imposed by social distancing isn’t worth the effort in hiring wait staff or dishwashers.  After all, if a restaurant can only operate at 35% of its normal capacity, that’s almost certainly an over 50% reduction in their capitalization rate.  Why bother opening the house, when it’s easier just to work as an unusually capacious food truck, leaving carry-out bags at the doorway?

This storefront-and-doorway approach is precisely the arrangement that a number of restaurants have adopted to bolster their revenue during these highly regulated conditions.  Here’s an example peering through the storefront window of an operable restaurant in the Navy Yard neighborhood: 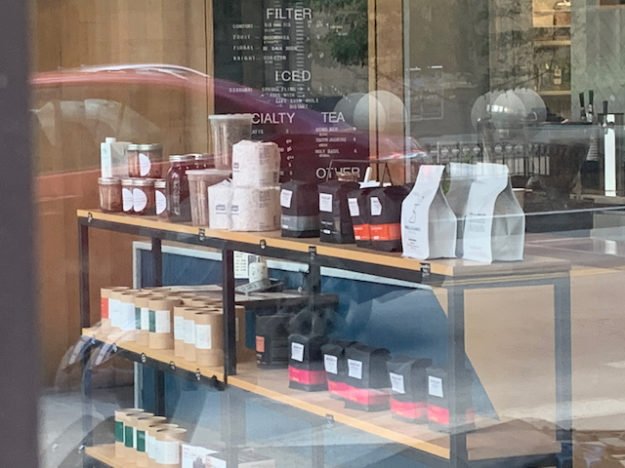 Sure, these shelves mostly feature loose leaf tea and coffee beans, but they also contain canned preserves, and (I believe) either coconut water or ultra-pasteurized milk, as well as some highly coveted toilet paper rolls.  Elsewhere, at the doorway, a music stand explains the temporary nature of how this particular establishment offers its non-perishable merchandise. 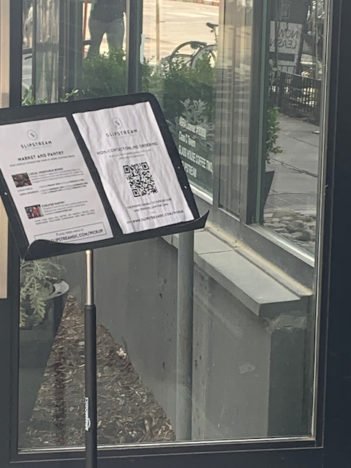 For the time being, it offers, within its “Market and Pantry” a variety of sought-after items: local vegetable boxes and a “curated pantry” (in its own words).  Some of this is hardly a stretch for this “enhanced adult coffeehouse” (my words); the shelving was always there at the entrance.  After all, Slipstream features Provisions as a subtitle/motto. 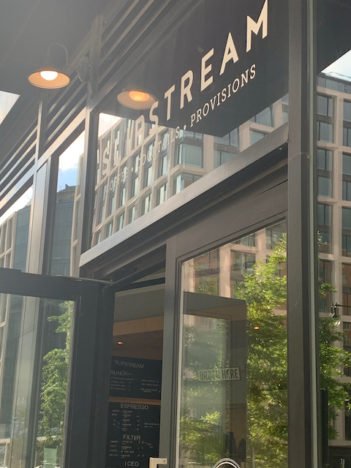 Provisions may be Slipstream’s specialty. But the establishment sure didn’t customarily feature toilet paper or vegetable boxes.

A mile or so away, in the Capitol Hill neighborhood, another restaurant tries a similar approach—this time one without any historic reference to provisions. 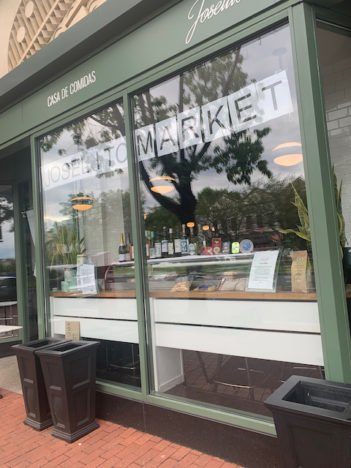 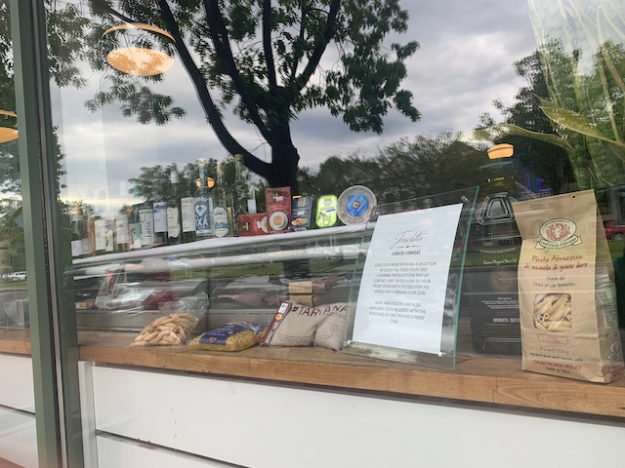 Joselito, a mid-price Spanish restaurant that refers to itself as a “Casa de Comidas” (meal house) features a variety of dry non-perishable goods—exactly the sort of edibles the experts encouraged us to buy at the start of the lockdown: pastas, legumes, canned fish, but also the essential liquors.  Good provisions for a lockdown.  And that’s not all: 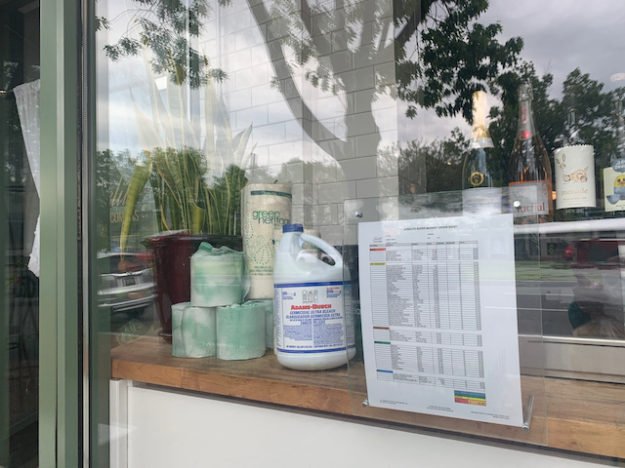 Much like Slipstream, Joselito sells toilet paper in individual rolls.  And paper towels, and gallons of bleach.  Bear in mind, these photos come from early May, when these items remained hot commodities because they were impossible to find in the grocery stores.  (Fast forward a month and they’re still in short supply, at least in DC).

But where did Joselito and Slipstream get their toilet paper and cleaning solution?  I have a suspicion they come from the back of the house…from their own provisions, in their supply closet.  These places aren’t open to the public and the scant kitchen staff aren’t exactly sullying most of the front-of-the-house floor space.  Restrooms remain almost completely unused.  And the restaurants, needing an infusion of revenue more than the supplies themselves (at least for the time being) decided they had nothing to lose as they transform their entrances into a mini-mart, with provisions for sale on display in storefront windows.  I’m not sure, under normal circumstances, that either of these gestures are entirely permitted based on business licensing stipulations.  Restaurants may broadly fit within the retail category from property management perspective, but it’s retail infused with a service, where the food consumed involves considerable preparation prior to consumption (either on-site or carryout), and a purveyor of dry goods—grocery or convenience store—does not require the same sort of licensing as a restaurant.  Furthermore, it is uncustomary for a restaurant to sell its own back-of-the-house supplies, whether individual bags of pasta or (especially) carefully meted portions of an item purchased wholesale.  I’m not certain that is taking place here, at least in terms of food, but I suspect it is in terms of toilet paper and cleaning supplies.  And, given the high demand for these latter two items, what would stop a restaurant from price gouging, under disguise of a legitimately functioning business?

Clearly I have to be careful in my analysis here; I’m not suggesting that either of these two restaurants have manipulated prices because of a spike in demand.  In fact, I’d say almost certainly that they have not.  Slipstream, I know, usually features a retail shelf at the entry, and that shelf normally displays roasted coffee beans or tea leaves that it also prepares and serves, for those who linger.  And this is typical of coffee shops.  While I’ve never patronized Joselito, it does refer itself as a casa de comidas (meal house), and none of the items in the storefront window had the generic, logo-free look of wholesale purchases.  And I think there’s a reasonable leniency to enforcement of standard business licenses, given the extreme financial hardship these mom-and-pops are facing.  But it is interesting how, faced with the widespread closure of retailers deemed non-essential, many restaurants—though all are permitted to open as carryout only—have sought to mimic the sales strategy employed by grocery stores—among the few retailers allowed to operate freely.  Some small business owners forced to close have credibly questioned the cavalier nature by which city and state authorities have parsed “essential” from “non-essential”: for example, a clothing store or hair salon has asked the question, “If I put a hot dog cart at my entrance, am I allowed to operate?”

Here’s another retailer in the neighborhood that already took a novel approach before COVID-19 forced its closure, and, faced with undue challenges to operation, has found a potentially smart solution. 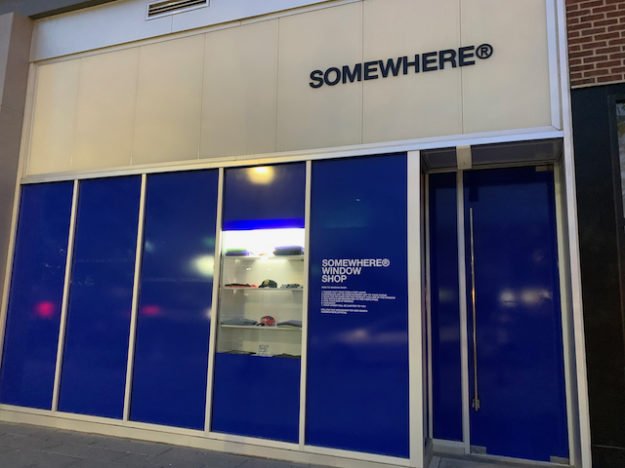 Somewhere, a retail/restaurant hybrid that began operations just a few months before this all went down, offers a combination of fashionable streetwear (mostly tennis shoes) in the front of the operation, with coffee and pastries from local suppliers in a lounge-like setting in the back.  Or at least it did. 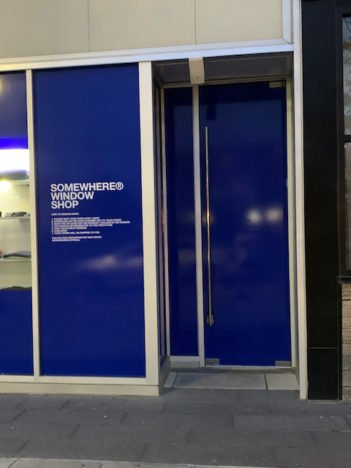 In cheerier times, these cobalt blue panels were windows and the doorway far more inviting.  For the time being, Somewhere has opted to keep its storefront mothballed (much like the Sephora I wrote about earlier), but it has provided a micro-display of some of its most popular items, along with instructions on scanning them and completing the order online. 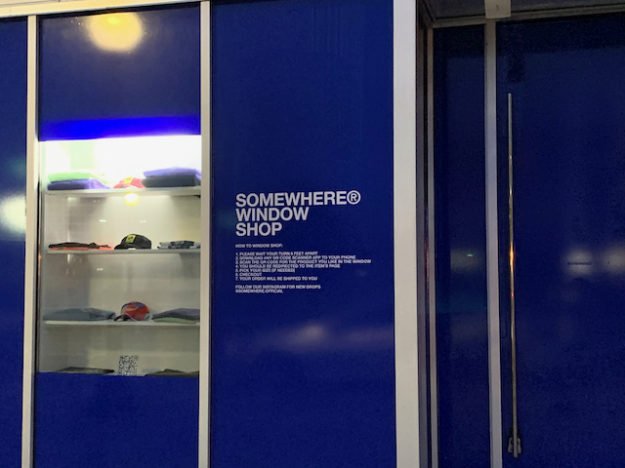 Unlike Slipstream and Joselito, Somewhere remains completely unstaffed at its bricks-and-mortar location during these times.  And it’s the outlier on its block; most of the other storefronts are either restaurants (carryout only) or fitness-minded services (closed completely). 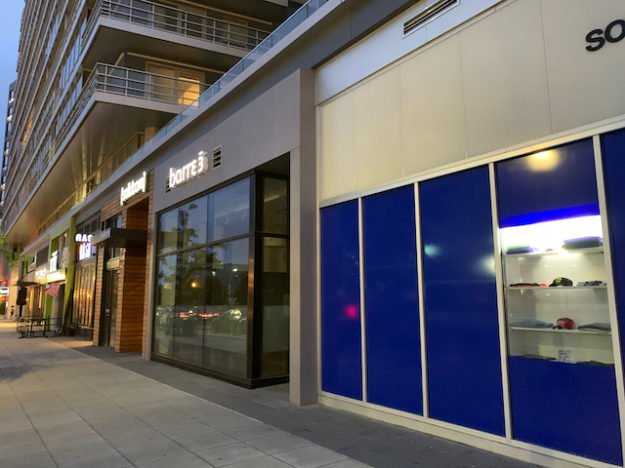 Since the focus of Somewhere sways more heavily toward displays of costly merchandise (rather than wholesale products that staff fully prepare on site), this makes sense.  Somewhere owes much of its revenue to the goods in that tiny storefront window, while the shelf spaces at Joselito and Slipstream merely supplement their specialty: prepared meals for carryout.

On a more unfortunate note, the decision to mothball the storefront at Somewhere (and the DC locations of Sephora referenced earlier) may have proven prescient, given the marked escalation in civil unrest and rioting that has started to take place almost coincident with DC’s phase one reopening after the pandemic.  The items on display will remain easy for a looter to steal at all three establishments, but at Somewhere, it’ll be much harder for them to penetrate further and plunder the rest of the merchandise and capital on the interior.  This judgment, at the time of this posting, may be premature, but we will almost certainly learn more about the wisdom of this approach as the rioting either escalates or the National Guard quells it.  For the sake of entrepreneurship and the energy it brings to its neighborhoods, I am much more prone to respect the mothballing, drastic though it seemed a few week ago.  It may be the secret to survivability, as it precludes the protesters from pinching their provisions.

PrevCentre Square in Easton is a big circle. Flunking geography or just keeping up with times?
Luxor Las Vegas: an architectural and structural marvel, if you don’t notice the dust swept under the rug.Next