Centre Square in Easton is a big circle. Flunking geography or just keeping up with times?

The City of Easton, among the oldest in Pennsylvania and one of only three places to receive an official public reading of the Declaration of Independence, contains a Soldiers’ and Sailors’ Monument at the center of the city’s circle, a landmark that sets it apart from most smaller American cities. 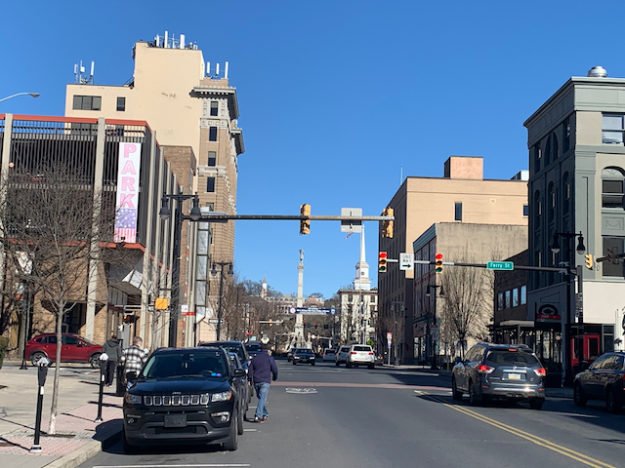 The circle rings the landmark. 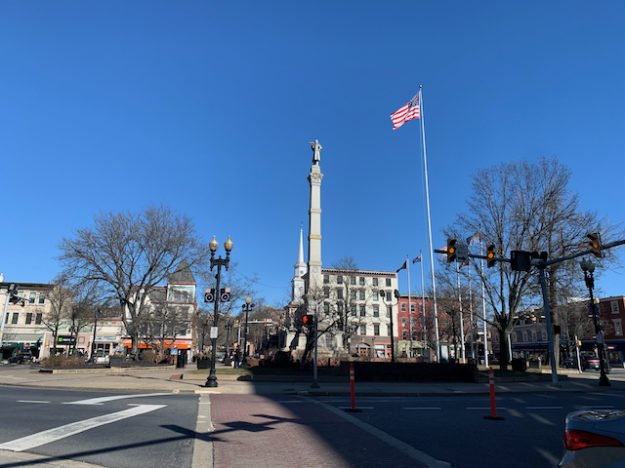 Across most of the country, if the city is a seat of county government, the most common structure one finds at that most prominent point in the middle of it all is the county courthouse.  The courthouse square is enough of an American archetype that audiences found it perfectly relatable when Marty McFly took us there on in his DeLorean that stormy night, whether 1985 or 1955.  Easton is indeed the seat of Northampton County government, but the county courthouse isn’t there in the middle of it all.  It’s not even all that close.  Instead, it’s an expansive complex consisting of the historic building with a much more contemporary addition, all of it several blocks away from that Soldiers’ and Sailors’ Monument—far enough away that the Northampton County Courthouse doesn’t fall within the downtown district whatsoever.   Instead of the spire, cupola, or clock tower of a courthouse, we encounter a different focal point: that verticality of an 120-year-old memorial adorned by a Union bugler, dedicated to those those who served in the Civil War.  In the middle of a circular road. 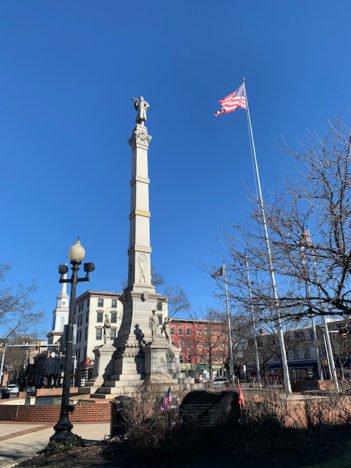 There’s nothing wrong with a municipality deviating from the conventional configuration for civic buildings.  Relatively few cities in America feature a circle as their absolute center point; my hometown of Indianapolis happens to be another that does.  But Easton may not defy custom as much as it seems; a closer look reveals what all the locals already know about that circle. 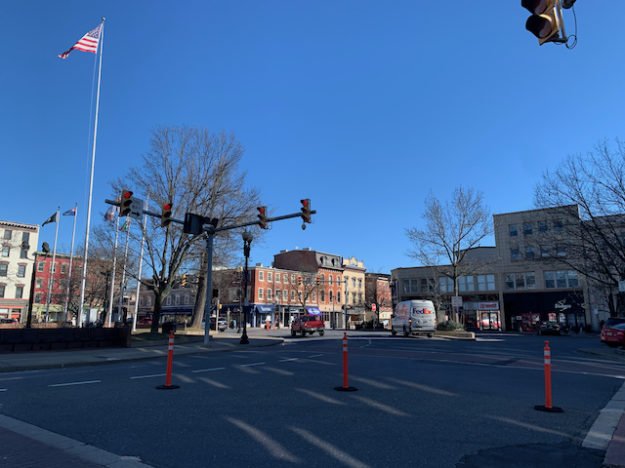 Yes, the traffic wends around that Soldiers’ and Sailors’ Monument with a circumference that intersect with the street grid at four separate points.  But there’s a catch. Pivot slightly to the right from that previous photo and it becomes obvious. 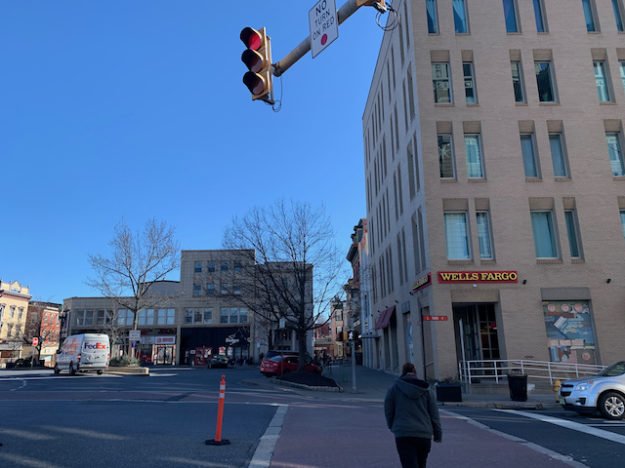 The buildings in the background meet at a conventional right angle, outside of the central circle.  They form a grid that envelopes the southeastern quarter wedge of the circle.  And it’s the same elsewhere.  Here’s the road (Northampton Street) radiating eastward from the circle. 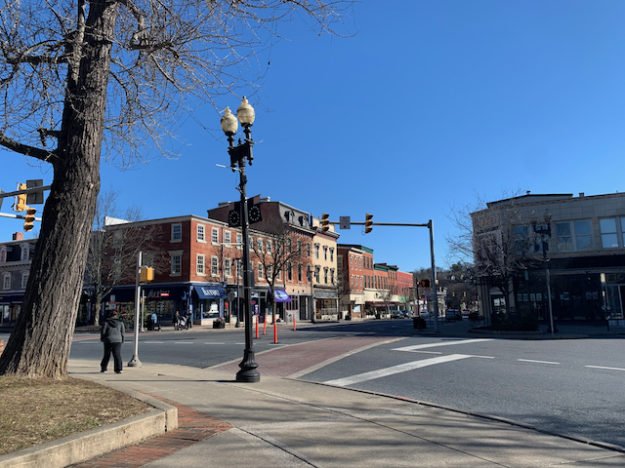 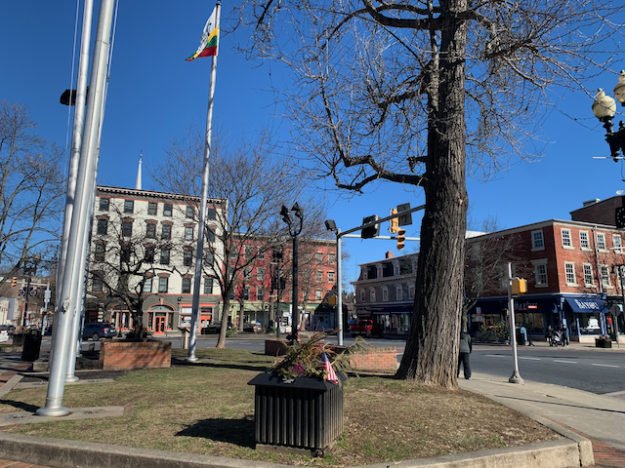 The arc of the circle is closer to where I stood for the photo, and in the back, the buildings again meet at a right angle, with a handful of angled parking spaces filling the void between the arc and the corner-vertex. 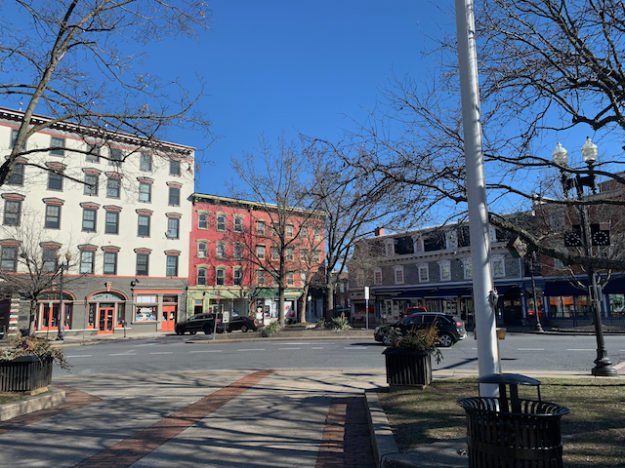 Needless to say, it’s the same in the northwest: 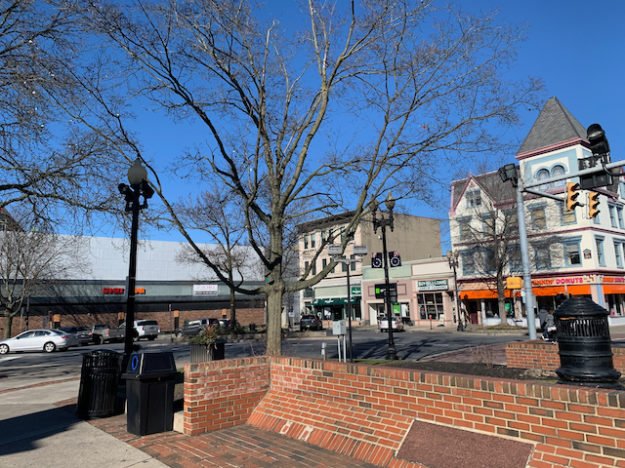 And in the southwest 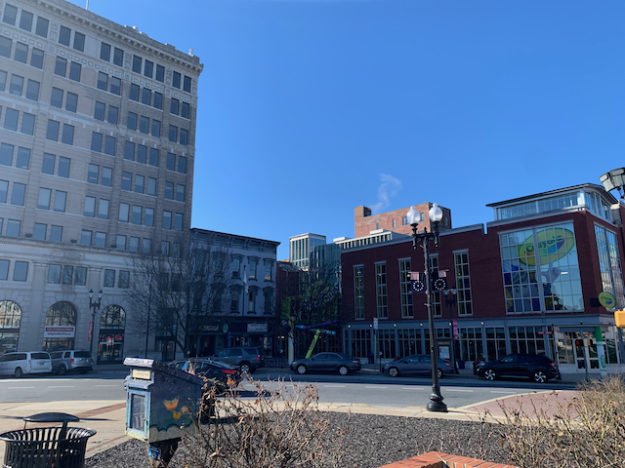 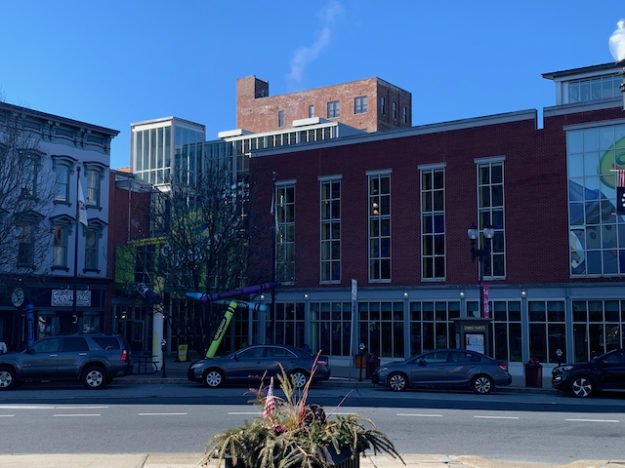 The southwest corner is probably the most pedestrian friendly, since it has comparatively little parking, with a sculptural plaza dominating instead: the entrance to the popular Crayola Experience, the de facto children’s museum for the greater Lehigh Valley region, which includes Easton’s larger, neighboring cities of Allentown and Bethlehem. 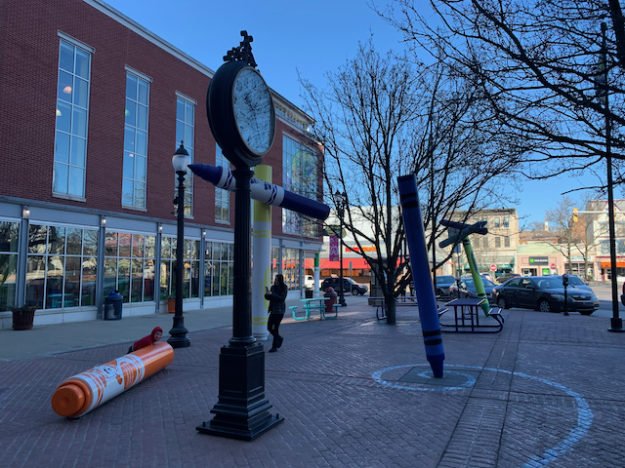 The Crayola Crayon is one of Easton’s most famous gifts to the rest of the country.  (The other, first founded in Boston but achieving widespread recognition through the factory in the outskirts of Easton, is the Dixie Cup.)

Despite the fact the the road is circular in nature, the arrangement of the buildings creates four corners.  By now it should be obvious: the original configuration was a central square that deviated from the grid in that each its four corner-vertices served as the absolute center of the four surrounding blocks.  It becomes much clearer when observing a map with both streets and a variant on a figure ground for the buildings. 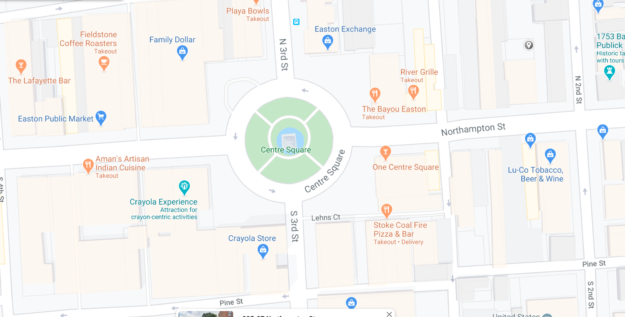 See how the buildings flank the circle?  It’s obvious how that the road used to carve a square out of those four corners, and the name is obvious: as indicated in the map, the locals still refer to it as Centre Square rather than a circle.  The original design by surveyor William Parsons in the 1750s designated it a “Great Square”, and most of the locals still refer to it as “Centre Square”.  But unless one really scrutinizes, the general perception is that of a circle, indicating how powerful roads are at influencing how we perceive a city’s layout for navigation purposes.  Yet the massing of the buildings is evidence enough that, at one time, the primary road here in the middle of Easton really was a square.

But when did Centre Square become a circle?  I’ll concede that I’m having a difficult time determining when the shift took place.  The old Works Progress Administration-era Pennsylvania: A Guide to the Keystone State refers to Centre Square in terms of its circular road, source material from the late 1930s.  That’s a long time ago—far older than one might expect, given the history of civic interventions to the urban fabric.  A recent article from an Easton-area newspaper attempts to chronicle the shift, and historical records suggest that Easton’s Centre Square originally hosted the courthouse.  (Just like everywhere else.)  Based on customs dictated in part (I suspect) by the Commonwealth of Pennsylvania’s Constitution, in the 19th century county courthouse buildings were categorically separate from the municipality that surrounded them: that is, while everything else in the downtown area was within the jurisdiction of the City of Easton, that courthouse in Centre Square was Northampton County.  In the late 1840s, Northampton County Council demanded that the Easton Fire Department vacate a nearby building.  The City of Easton was vexed at receiving relocation injunction from a legislative body that rested outside the municipal boundaries; after all, the fiat came from courthouse in Centre Square, then not a part of Easton municipal limits.  To show its disdain, some party from the City retaliated by surrounding the courthouse with a circular fence, reinforcing the divide between the structure and the disenfranchised city that surrounded it.  At some later point, this constitutional exclusion of courthouse buildings got repealed and county courthouses became part of their associated municipality.  The City tore down this courthouse in 1861, replacing it with a fountain that more closely aligned with the circular configuration imposed by that angry iron fence.  And in 1900, the Soldiers’ and Sailors’ Monument we see today at Centre Square enhanced the site further.

The sense of “square-ness” retreated incrementally, replaced by circularity, even while most Eastonians retained the Centre Square name in common conversation.  And it happened fairly early: a far more common (and predictable) outcome would have been a square-to-circle conversion in the 1960s.  After all, it was the 60s when it became clear to most civic leaders that the conventional American downtown—the urban neighborhood in general—was on the brink of collapse.  Suburbanization that began in the late 1940s escalated rapidly, and many cities were showing clear evidence of population loss from 1950 to 1960, only to witness the losses amplify at the 1970 Census.  Car ownership became the standard, and the finely wrought street grids of the late 19th century, with small buildings hugging the sidewalk but nary a single off-street space to park, increasingly appeared obsolete compared to the suburban office parks and shopping centers.  Even small cities like Easton felt the pinch: it lost over 10% of its population to adjacent boroughs and townships in the 1950s alone, then continued to fall through the 60s and 70s.  Though it has stabilized and recovered somewhat, the city’s 27,200 population estimate in 2018 is a far cry from its 1950 peak of 35,600.

To accommodate changes so that older cities like Easton could effectively compete with the shiny new suburbs, leadership often sought radical means to alter the urban form.  They demolished derelict old buildings and replaced them with surface parking.  They widened streets and made turn radii more generous.  They created one-ways and little spur streets to expedite traffic flow onto a few newly christened arterials.  They timed lights so motorists could careen through parts of downtown, and, of course, they created limited access freeways to bypass urban areas altogether, with convenient exit ramps channeling the vehicles to their preferred destinations.  Planners in nearby Philadelphia nearly sought to destroy the city’s famed City Hall Square, preserving only the clock tower and destroying the remaining 90% of the structure to build a high speed traffic circle.  Preservationists thankfully intervened, but in the mid 20th century, Philadelphia’s signature building came close to facing the wrecking ball. None of it worked, of course; cities continued to suffer disinvestment up through the 1980s and sometimes beyond.

It would have come as absolute no surprise if the “circling” of Centre Square took place during Easton’s socioeconomic low point—that was when these sort of things happened.  Circles are easier for cars to navigate (basically an elegant roundabout) than a square with sharp 90-degree angles at each corner. 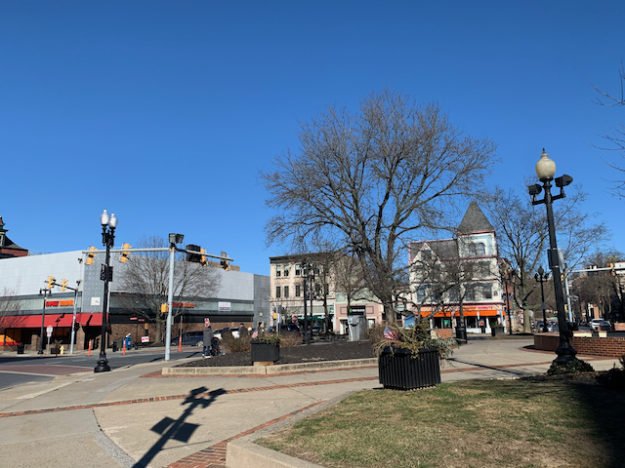 But they didn’t.  It had already happened a century earlier.  In short, Easton got a head start on accommodating vehicles (first horse-drawn, then motorized) by circling its Centre Square well in advance of the auto mobilization of American urbanism.  And having this built-in advantage—a comparatively car-friendly center with pockets of parking at each corner—did nothing to stave off the decline.  Nor did it help at all in any other city.  The regeneration would have to take place organically, from younger generations rediscovering the historic assets of a walkable downtown with interesting mixed-use buildings and an appealing plaza for pedestrians to congregate, as one sees in Easton’s Centre Square today.  Despite its many stop lights and parking pockets, the downtown is clearly rejuvenating starting from its circular, squarish core and working outwards.  The same could be said for my home city of Indianapolis with it’s monument circle, with one core difference from Easton: the center of Indy (the Circle City) has always been a circle, and architecturally challenging circular facades that surround that ring road are there to prove it.

PrevCause-and-response urbanism in Alexandria: when grafting a storefront is like pulling Nectar from a flower.
Pandemic provisions: restaurants become makeshift retailers to boost their bottom lines.Next

6 thoughts on “Centre Square in Easton is a big circle. Flunking geography or just keeping up with times?”