Cause-and-response urbanism in Alexandria: when grafting a storefront is like pulling Nectar from a flower.

I rarely devote an entire blog article to just one small business—it always comes across that I’m singling it out, even if (as is the case here) it’s for a positive reason.  But when it comes to this one, it’s the allegiance between a business and the structure that houses it that really merits attention.  And, truth be told, the focal point is the structure itself.  But I have to reserve a hat-tip to any business owner willing to take a risk, which, in the case of Nectar, a coffee and wine bar in the Del Ray neighborhood of Alexandria, involves entrepreneurs who opted for a less-visible storefront space merely because they recognized good street engagement and urban form.

Here’s the nectar that the gods have delivered us: 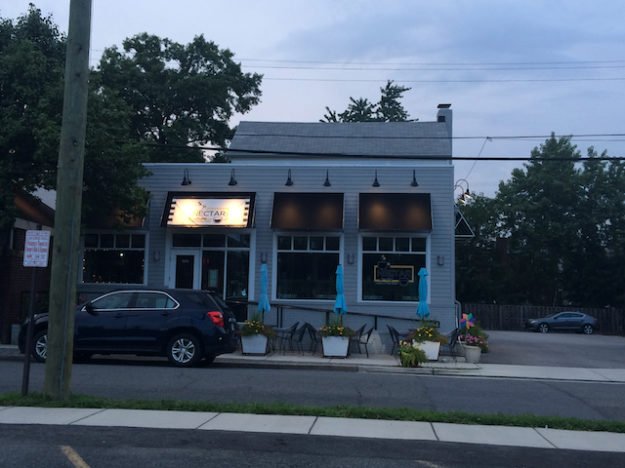 It’s an eye-catching little retail façade, with plenty of big windows fronting onto a small patio that allows al fresco dining for about a dozen more customers.  It sits tightly next to the neighbor on one side— 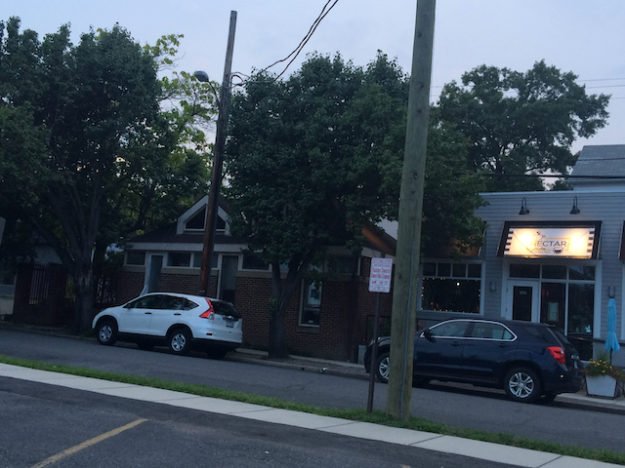 —providing more evidence of the urbanism that characterizes Del Ray, a pedestrian friendly transit spur to Old Town Alexandria, less than two miles to the southeast.  Though the oldest homes in Del Ray date from the 1890s, when the developer first platted the bedroom community, it didn’t really take off until the 1920s.  The historic streetcar-generated commercial spine to Del Ray, Mount Vernon Avenue, retains the walkable character one expects from most urbanized development of the era. 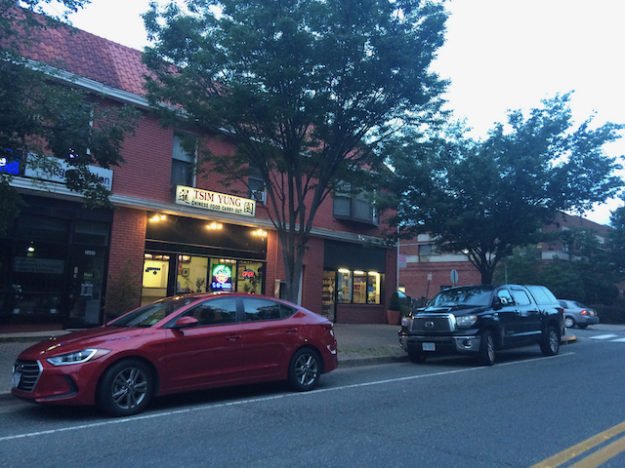 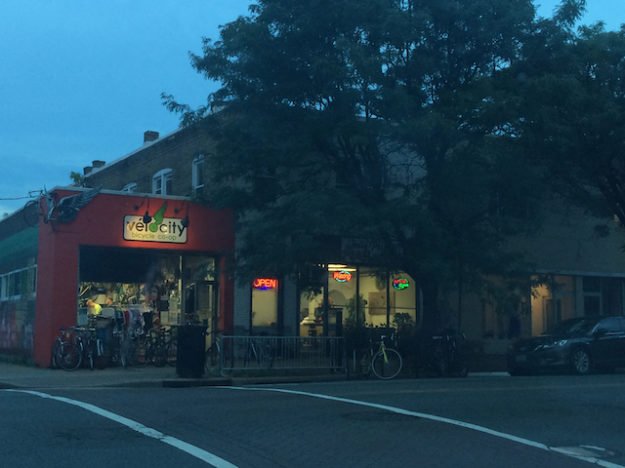 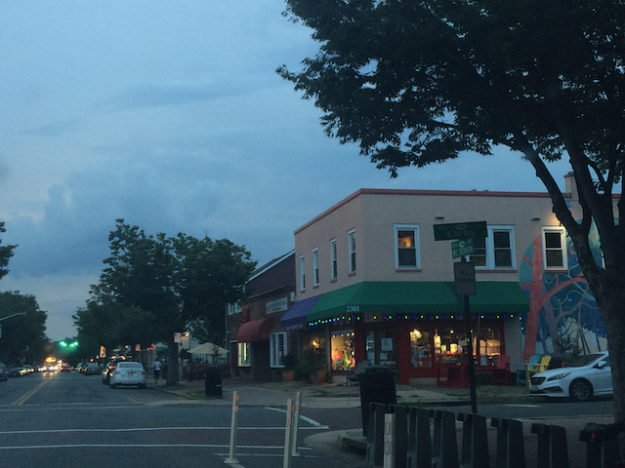 Mount Vernon Avenue really is a great street: stretched across nine blocks of mostly uninterrupted commercial, the road devotes only two lanes to vehicular traffic with copious on-street parking to help calm it, along with regular intersections.  Nearly all the businesses remain locally owned, and the medium- to high-density housing nearby ensures that there’s a good client base.  Though only a few of the buildings are of architectural distinction, they are diverse enough in age and massing to avoid monotony, and those that are two-story typically feature occupied offices or apartments above.  Though imminently pedestrian friendly, the parking is abundant enough that Mount Vernon Avenue never scares off the more auto-dependent suburbanites, yet the spaces are mostly subtle (either along Mount Vernon, the side streets, or carefully tucked away off-street behind the structures) that it retains a largely consistent commercialized street wall.  It’s not really a wild party vibe—the homeowners of Del Ray are too professional and family-focused for that—but it does get plenty lively on weekend nights and certainly fits the standard for “night life”, if a lot more mature than one might encounter in most bumpin’ parts of Washington DC.  The corridor seems to enjoy low vacancy because it has so much going for it. 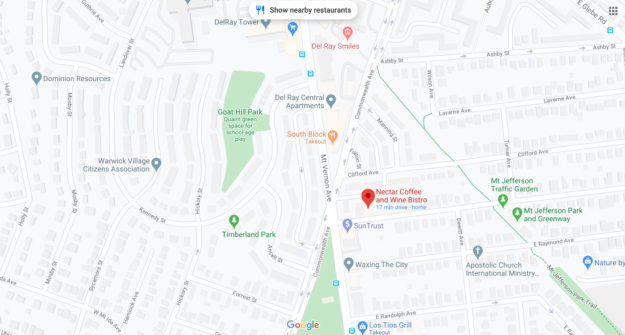 It’s the third building down on Hume Avenue, a primarily residential street that gets relatively little through traffic.  Motorists traveling down the much-busier Mount Vernon Avenue are not going to see it, putting the restaurant at a distinct disadvantage, despite the otherwise favorable location of the neighborhood in general.  But even though the building looks perfect to host a breakfast-centric café that stays open late enough for afternoon wine, its location could prove a death knell for that restaurant/retail culture that is so sensitive to granular differences in location.

There’s another catch to Nectar that makes it more distinct.  Take a look at the other side of the building: 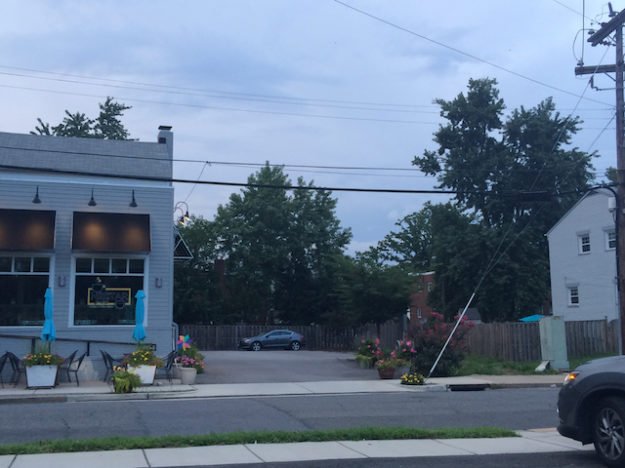 Indeed it has off-street parking, subtly tucked away behind the structure.  This is probably a selling point that would favorably distinguish it from some of the restaurants on Mount Vernon Avenue itself.  But Hume Avenue is a local road, and Nectar won’t attract much in the way of impromptu visits from people just happening to pass by (either by foot or by car).  And there’s an even bigger consideration that these photos only marginally capture.  See the pitched roof line to Nectar, with a chimney poking out of the right end?  Notice how it appears a bit further in the background?  Take a look at this Google Street View and see if it all makes sense.

There’s a house built in the back of Nectar.  And apparently it’s a lot older.  Step back in time to the June 2014 Street View and it’s just a conventional old house, with a big side and back yard, and enough space out front (apparently) to support a little cafe.  The owners tore down the front porch and built the original restaurant, Emma’s, out of the house, adding 954 square feet and retaining the upper floor as two apartments, according to this Patch article.  While most readers were unlikely to bat an eyelash at this proposal (neighbors excluded), those who are reasonably attuned to the planning profession may look askance.

Why?  Well, it’s a fundamental change in land use: from a residential parcel to a commercial/mixed-use one.  While rezoning can take place through a formalized appeals process, they rarely involve a single parcel; such spot zoning is forbidden in most municipalities (except under extreme and rare circumstances), because it erodes the very notion of a zone.  If the owner of a single parcel can appeal to change the zoning coterminous with the boundaries contained in his or her title, why wouldn’t anyone maximize the value of his or her land by requesting a rezoning to something more valuable, like a glue factory?  And doesn’t the word “zone” already denote a shared characteristic across a reasonably large spatial domain, uniting disparate parts through a single consideration—in this case, a legal one?  Needless to say, on those rare occasions when the rezoning of a single parcel falls within legitimate administration proceedings, the neighbors are usually eager to step up to the podium to remonstrate.

So, what this most likely means is that Emma’s (the predecessor to Nectar) discovered that the old house was already part of a district zoned commercial or mixed-use, probably because the parcel just to the west is also commercial, and the one next to that is an auto repair shop that fronts Mount Vernon Avenue, where all the properties are either commercial or mixed-use.  Or perhaps it had hosted a commercial property at one time, and the legality of a non-residential use is grandfathered.  So the approval process to transform this home on Hume had little to do with zoning administration; it simply required building permits to add on to the front porch…and possibly an authorization to extend the property so close to the lot line, or to build an extensive amount of impervious surface for the parking out back.  Planning, but not zoning per se.

The end result is a charming house-bar with clear signals of its commercial intent.  It vaguely recalls a typology I explored many years ago, when I started noticing similar pitched roofs in Indianapolis, protruding out from behind low-rise commercial façades.  The original developer of the grafted storefront, Emma’s Coffee Shop and Wine Bar, lasted only two years, but it didn’t necessarily close due to economic struggles.  By 2017, two Irish sisters bought the business and rebranded it Nectar Del Ray, preserving much of the character but modifying the menu somewhat.  And most evidence suggests that, as Virginia slowly re-emerges from COVID hibernation, it will re-open as well.  Having passed by during operating hours, it has the look of a successful enterprise.  The coffee is superlative.  Given the fiercely competitive nature of the restaurant industry, any establishment that can survive more than two years is usually seen as successful.

I offer two congratulations: first to the original property owner, for (most likely) maneuvering within existing zoning stipulations to commercialize a property using an approach that is none too visually jarring; it actually improves upon the façade to the house, in my opinion.  Secondly, I can extol the proprietors of Nectar Del Ray (the Waller sisters), for recognizing the merits of this building typology and taking the risk of locating slightly off the main drag.  Though unquestionably less visible, the house-bar’s presence on Hume Avenue gives the appearance of being tucked away, less hectic (almost cozy), and sort of an air of refinement for those “in the know”.  Though subjective, these characteristics might actually help the Wallers overcome the hurdles of their establishment escaping the sights of most motorists passing through Del Ray.  Then again, the fact that Nectar shows up on a Google Maps search definitely helps…and the ubiquity of destination search apps (and GPS mapping) may help spawn similar small business growth in formerly obscure sites.  The most curious bees will still land on this flower.

PrevSeasonal displays during crisis: are DC’s cherry blossoms an act of patriotism or funeral flowers?
Centre Square in Easton is a big circle. Flunking geography or just keeping up with times?Next