The quirky house: whether Queen Victoria or Hogwarts, the intrigue survives long after the original owners have departed…if they ever even left.

While virtually all of my blog posts begin in some way with an anecdote, not all of them are as referential as this one.  And rarely does the tangle of references give me such a great opportunity to promote another friend’s creative ventures as seamlessly as this  But here we are, with a chance to revisit a few structures I never would have imagined to encounter from a guided tour of Kokomo several years ago: 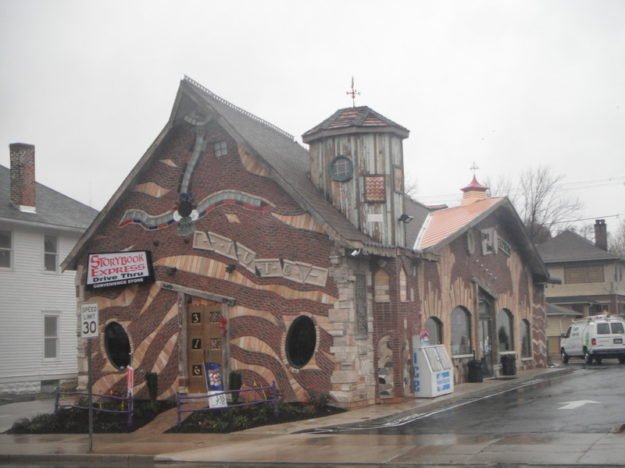 Does this ring a bell?  Probably not—the photo itself dates from nearly eight years ago, with the ensuing blog article itself from early 2013.  And the article didn’t get much traction.  The pouring rain that pervades through all the photos I took that day was the remnant of Superstorm Sandy, losing its momentum as it lumbered across the Midwest.  Alas, this idiosyncratic structure isn’t a training ground for aspiring wizards; it’s a convenience store called Storybook Express. 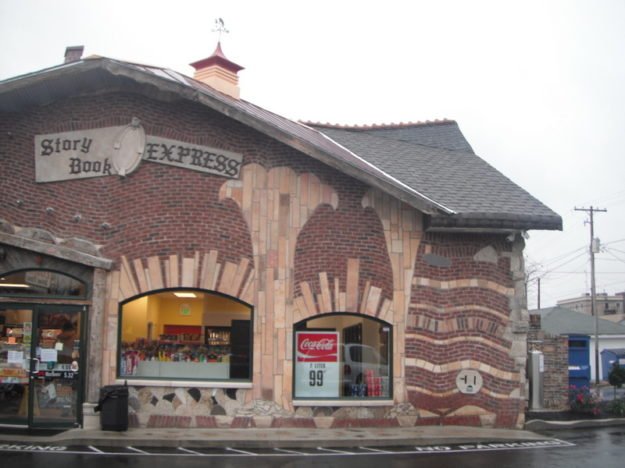 And no, it’s not the Beach Boys’ Caribbean dream.  It’s Kokomo, Indiana: the “City of Firsts”, known for its pivotal role in supplementing the Detroit auto industry, as well as a number of innovations helping to advance the modern automobile.  For a city that historically has depended heavily on its manufacturing image, Kokomo’s shift to both distinctive, fanciful architecture and a variety of revitalizing civic art initiatives have helped to broaden its staid municipal brand.  And Storybook Express isn’t the only place with this fanciful appearance. 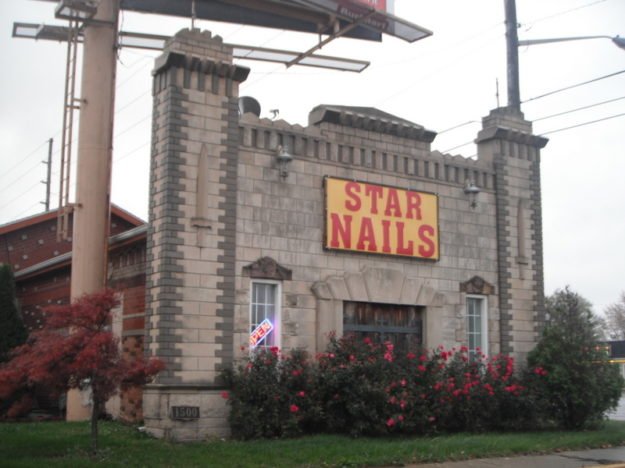 Who would have thought you’d find a nail salon at Medieval Times?

Despite the age of these photos, a quick search told me that both Storybook Express and Star Nails are still in business.  Not that it would necessarily matter: if either establishment closed, the property manager should have no great struggle finding prospective tenants and securing one, as long as the terms of the lease are reasonable.  Even amidst the pouring rain, it was clear that these were distinctive little buildings.

But what prompted me to reflect upon my trip to Kokomo?  It was none other than this video, shared to me by a dear old college friend of mine (who created it): a tutorial on How to draw a quirky house. One doesn’t have to advance very far in the tutorial to see why Becky Kilimnik’s quirky house evokes Storybook Express in Kokomo, or how both the drawing and the real-life edifice recall a paradigm of one of the most American of architectural styles: the Victorian home.  Sure, the massing of the two buildings featured in Kokomo look nothing like residences, but they evoke the imposing verticality; the pastiche of stylistic languages, cultures, and time periods; the fanciful nature of a quirky house.

And today, as many homes broadly resting within the already generous definition of Victorian architecture approach (and exceed) their 150th birthday, it’s time to reflect a bit further on the another adjective from the preceding paragraph that comfortably partners with “quirky”: the use of the word “fanciful”.  Even if the building is not a residence per se, it can evoke the stuff of fantasy novels, if the details are intricate and extravagant enough.  The locals in Kokomo ostensibly refer to Storybook Express as “The Harry Potter Building”, and why shouldn’t they? 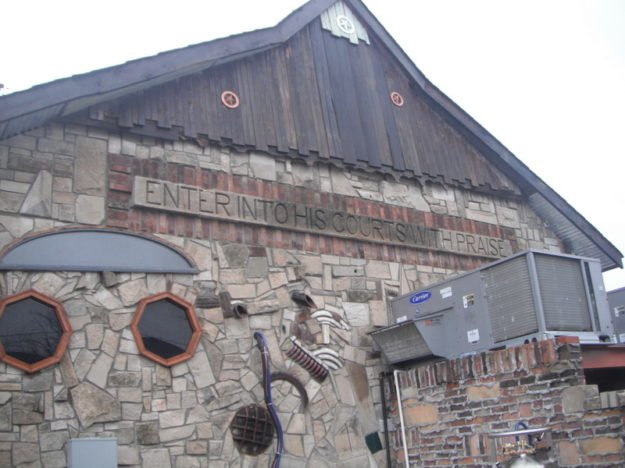 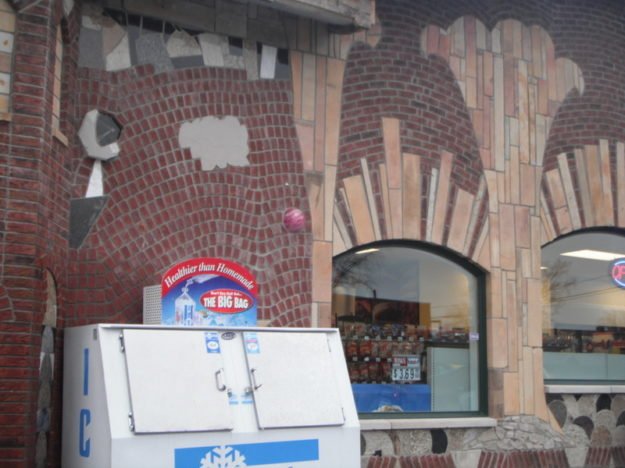 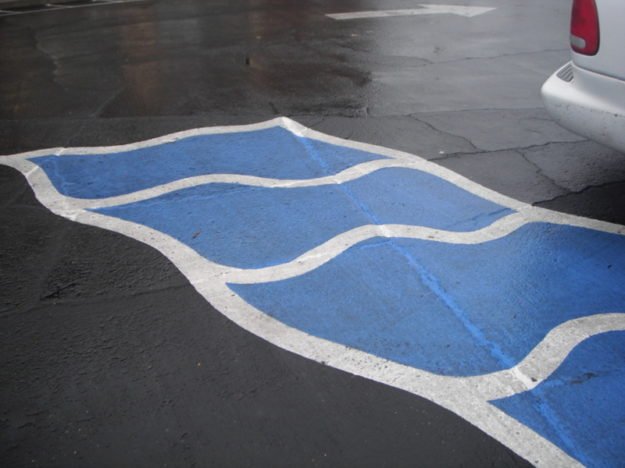 The closest, most direct inspiration for the Kokomo buildings may not be as much Victorian as its one of its later derivatives: the obscure, niche “storybook” architecture popularized during the Golden Age of Hollywood, and most prevalent in (no surprise) greater Los Angeles.  I covered a few examples of these homes in a post on LA’s gentrifying Mid-City neighborhood.  These distinctive homes amplify the already exaggerated embellishments of Victorian homes to mimic something out of a Disney depiction of a fairy tale.  And Harry Potter’s Hogwarts may simply be a massive 21st century equivalent.

Perhaps most salient among the quirky—the fanciful, the Victorian, the storybook, the Kokomo—is the way it recalls yet another article: the phantasmagoric.  It’s almost natural that Becky Kilimnik’s tutorial would feature a black cat—the stuff a macabre superstition—peering out of a second floor window, amidst floors that seem to violate every law of physics (as was the case, no doubt, to early onlookers of the first Victorian homes).  But what else might one expect to see through one of those jaunty, oblique apertures?  But of course: a ghost!

If a development company in Kokomo is going to create a commercial building that people will almost instinctually brand “Harry Potter”, it’s hardly much of leap from prosaic wizard pedagogy to paranormal haunting.  Through much of American folk history, the archetype for the haunted house has nearly always involved something Victorian or one of its offshoots.  While this may have something to do with the fact that, since the style fell widely out of favor by the early 20th century, the Victorian home now typically meets the American definition of “old”, all those turrets and gables and frilly brackets just offer vastly superior places for emergent hauntings.  Paired marvelously with her quirky homes is one of Becky Kilimnik’s other great hobbies, the collection and dissemination of ghost stories, which she has continued to capture through her podcast, Homespun Haints, where her quirky (and often eminently Victorian) homes illustrate the lead-ins to individual podcasts.  And, because Becky has far greater knowledge than I do on this subject, I’m going to promote her work shamelessly by allowing her to continue (and improve upon) the analysis I’ve begun through her new spin-off video: Why are Victorian homes haunted?

Haunted or not, the quirky house (convenience store, nail salon) of Kokomo sufficiently captured the public’s imagination that has become the signature style of the developer, Fortune Companies, Inc.  Though Fortune is willing to dip its toe into more prosaic undertakings when necessary, a quick virtual exploration of Kokomo revealed to me that, just a few blocks closer to downtown from Storybook Express, this idiosyncratic development company recently completed another, mixed-use venture: townhomes with retail fronting the main road.  Unfortunately the current Google Street View only captures it at an awkward angle, but the pastiche remains evident.  For a more promotion-friendly depiction of the Market Street Townhomes, the Fortune Companies website more than fits the bill.

As Becky narrates in her video, Victorian architecture’s ostentation and intricacy fell out of favor, when the efficiency of fordism prompted an emphasis in simplicity, accessibility (both aesthetic and fiduciary), and the near death of artisanship.  Yet, by the second half of the 20th century, these same gestures once seen as quaint and indulgent began to intrigue new generations, often concomitant with the renewal of long-neglected old urban neighborhoods.  And, since its renaissance, the phantasmagoric character of Victorian architecture has continued to fascinate prospective homebuyers, often to the point that developers commission Victorian revival homes to fill the vacant lots of neighborhoods benefiting from rediscovery and reinvestment.  In short, the rise and fall of numerous other architectural movements hasn’t dimmed the American public’s perception that the Victorian movement gives us a great quirky house.  Homes and commercial buildings once deemed obsolete now sell for six or even seven figures; even little Kokomo has a well-regarded, nationally recognized Victorian district; one can easily find a quirky house in the Old Silk Stocking Neighborhood.  And dare we ask: what percentage of these Victorian renovators has purchased a quirky house with the hopes of awakening a long-dormant ghost?  And how many struck supernatural gold?

PrevLunges in the time of corona: finding fitness through alternative use of a baseball stadium.
Pandemic in the park: did restrictions around DC’s Tidal Basin help flatten the curve?Next

One thought on “The quirky house: whether Queen Victoria or Hogwarts, the intrigue survives long after the original owners have departed…if they ever even left.”