Pandemic in the park: did restrictions around DC’s Tidal Basin help flatten the curve?

Given the patchwork of regulatory subcultures that our country’s federalist system inevitable creates, it should come as no surprise that this vast, diverse country is eliciting widely variable responses to the COVID-19 pandemic, both in terms of the key metrics—confirmed cases, deaths, recoveries—and in the fuzzier, day-to-day manifestation of this most acute of public health crises in at least half a century. I’m not a physician or an epidemiologist, so it’s far easier and more credible for me to ponder on the fuzzy stuff.

Take, for example, a widely touted article that attempts to depict which states are abiding by social distancing rules the most effectively.  This article uses the findings from a data analytics firm called Unacast to observe a shift in travel patterns both before and after the announcement that COVID-19 had reached pandemic status.  Based on these results, the “state” where I’m experiencing the lockdown, District of Columbia, ranks right at the top; that is, residents have reduced their travel by 45%.

Say what you want about Unacast’s ability to monitor our travel patterns, I still question these results, largely because I live here, and I have a reasonable understanding of the work force.  Needless to say, Washington DC is highly urbanized, much more even than New York and New Jersey (also in the top 5 of the study, but also at this point the two states most heavily affected by the pandemic).  And while the other two winning states (Nevada and Alaska) are much less urban, their populations are so heavily concentrated in one or two cities—while most of the rest of the state is sparsely inhabited—that it’s hard not to conclude that they may share characteristics with New York and New Jersey, where cities define most people’s living and commuting patterns.  The five states at the bottom for social distancing—Idaho, Montana, North Dakota, South Dakota, and Wyoming—are all largely rural and among the least populated.  (Incidentally, three of these states never faced mandatory lockdowns, and all five also lurk near the bottom for their per capita death rates.)  Meanwhile, another factor that may explain DC’s high ranking is the industry that captures much of its work force: a disproportionate number of DC workers are in government, government services, or consultancies, which means their white-collar jobs can easily shift to remote work in their homes.  Sparsely populated areas with great dependency on agriculture and industry simply cannot shift their operations that easily, if it all.  However, time has proven that densely populated places disproportionately suffer from community transmission of the virus, and, more specifically, the metropolitan region is probably the most affective geographic unit for assessing the disease.  Some large metros (Charlotte, Portland) are faring extremely well, while smaller urban nodes (Albany, GA) can manifest far higher transmission than their much larger peers (Atlanta).  Whether large or small, the urbanized area is the laboratory for assessing the problem and prescribing site specific solutions with lasting impact.

Another reason I’m skeptical about the District of Columbia’s resounding success in social distancing is what I’ve been seeing from my own excursions through the city. 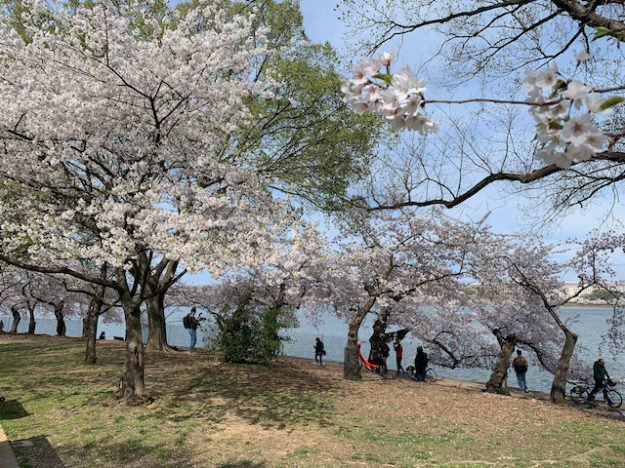 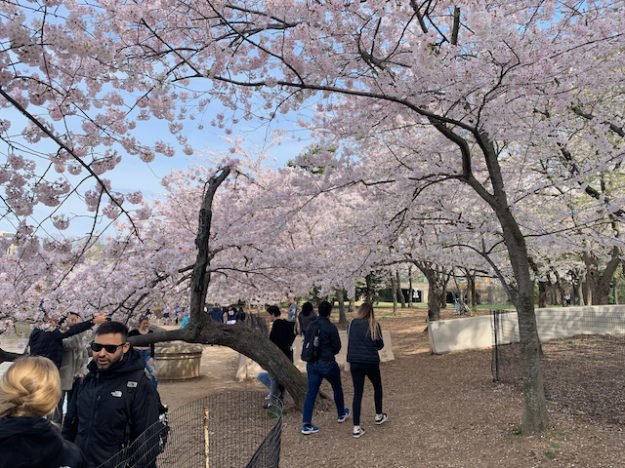 These photos, captured during the peak of the city’s cherry blossom season, show sizable throngs of people leisurely walking along the Tidal Basin, a major tourist attraction even during the slow times.  But thanks to the blossoms, spring is not a slow season. 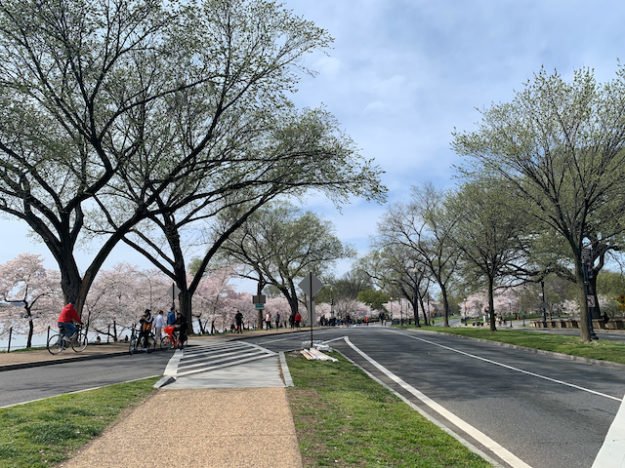 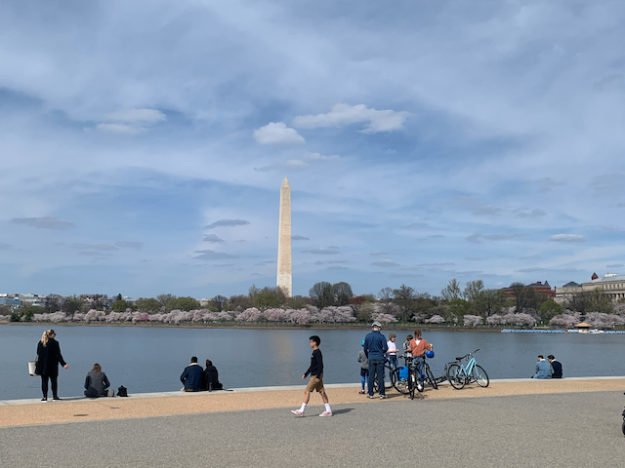 These photos date from the 22nd of March, after the basic CDC standards for distancing went into effect, right before an escalation of the stay-at-home rules, and these “crowds” are a far cry from the usual numbers clustering to see the pallid pink canopies in a good year.  But this late in March, people were well aware of the risk; they were behaving more carefully than usual, but hardly gripped by the paroxysms of fear that began to characterize much of the country after the proliferation of reported deaths in New York City. 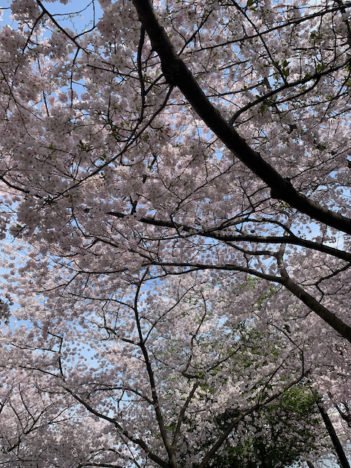 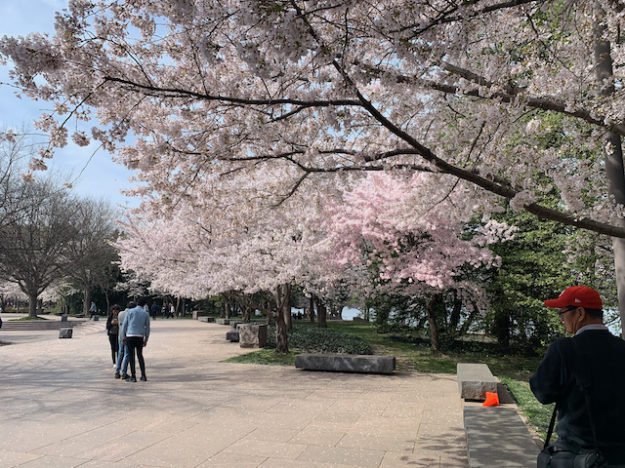 In a good year, the Tidal Basin captures visitors from across the globe to admire the hundreds of cherry blossom trees that circumscribe the water; late March is usually the seasonal peak.  While locals enjoy the time as well—people even decorate their homes in pink ribbons or paper cutouts of blossoms—they’re more likely to seize the opportunity on a weekday, during off-peak visitation. If not for COVID-19, the pathways around the Tidal Basin on this spring weekend would typically be so packed that the throngs would push you forward.  Although the photos above still depict a vibrant scene, it’s nothing like the usual festival.

And, incidentally, these photos essentially depict “the last hurrah” at the Tidal Basin: 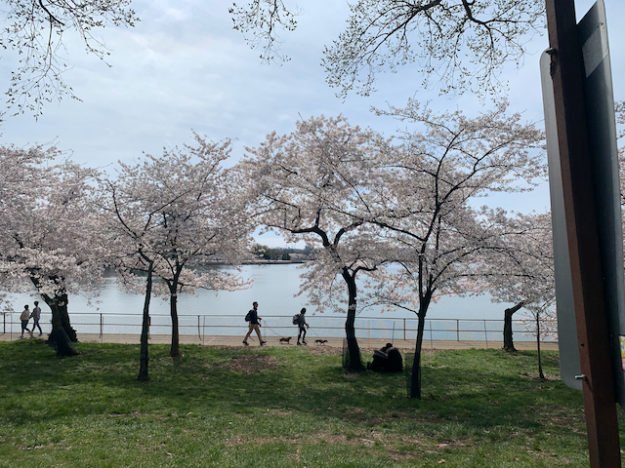 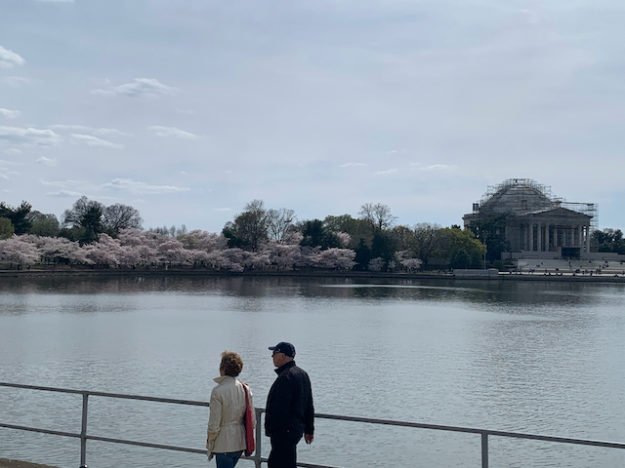 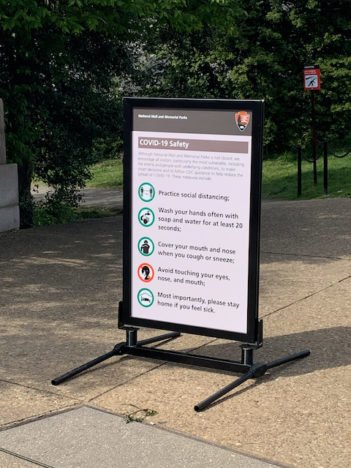 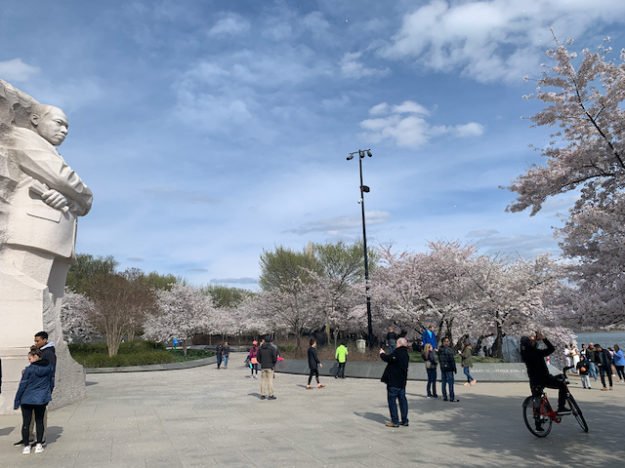 Already, under the conditions depicted in these photos, Mayor Muriel Bowser had sought more proactive measures to discourage congregating among the pretty trees: shuttering the WMATA Metro stops closest to the Tidal Basin (Smithsonian and Arlington Cemetery), roping off the docking stations for DC’s Capital Bike Share Program, and, perhaps most importantly, closing all vehicular traffic on the network of streets servicing the Tidal Basin and the western half of the National Mall.  While this latter move significantly reduced vehicular access to the area—no one had a convenient place to park—it had the unintentional effect of increasing the desirability of the space by making it more walkable.  For the first time, major roads in the immediate vicinity were pedestrian and bicycle only. 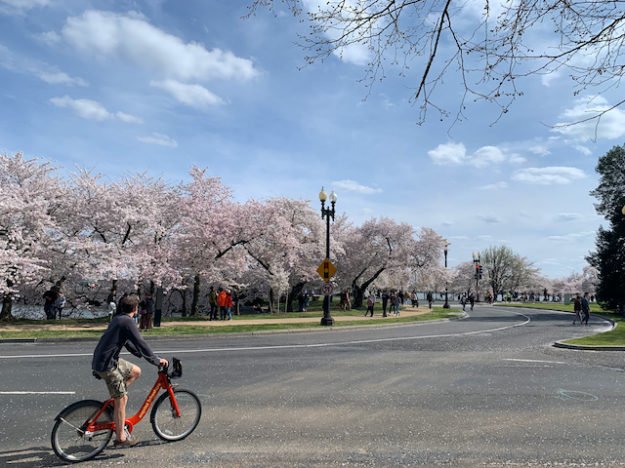 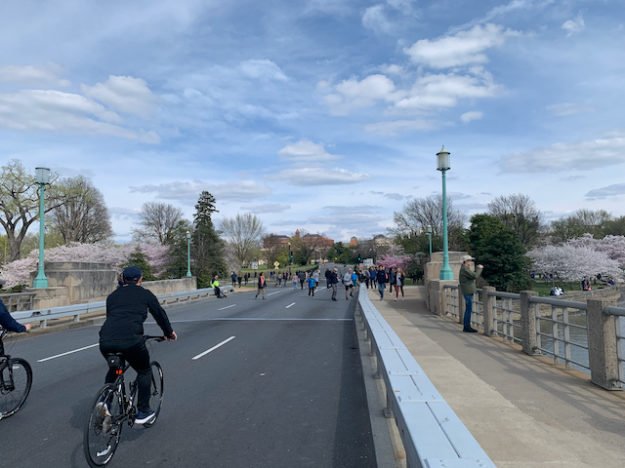 For those who went to the see the blossoms on the 22nd of March, it was perfect: comfortable weather, abundant sunshine, never over-crowded like most years, and pedestrians and bicyclists had the surrounding streets all to themselves! 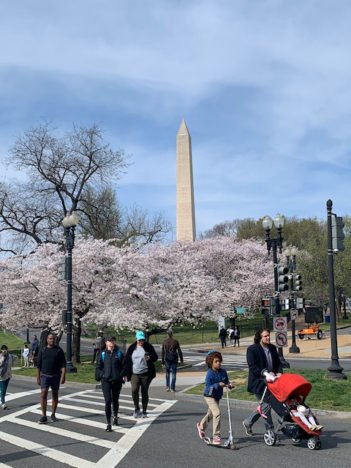 In short, the partial restrictions actually enhanced the appeal of the Tidal Basin.  Sure, it was no longer reachable to people arriving by car who couldn’t handle a long walk, but it clearly wasn’t stopping anyone else.

In many respects, this approach demonstrated how hastily conceived top-down measures can yield the opposite of the intended effect through the bottom-up populist response.  What I witnessed that day at the Tidal Basin vaguely evokes the unintended consequences of those jurisdictions that sought to invoke curfews to stop the spread of COVID-19.  Implementing a curfew in a dense, urbanized region consistently backfires, because the restrictions force the populace out onto the streets in a much shorter permissible window of time, concentrating them even if they would otherwise seek to avoid it.  And almost all evidence suggests that concentrating people is the golden ticket for disseminating the virus.

Within hours of these photos on the 22nd, Mayor Bowser issued more stringent restrictions,  far beyond the admonitions depicted on that big sign. She deployed both the Metropolitan Police Department and the National Guard to inhibit access altogether on all streets around the Tidal Basin, the Jefferson Memorial, and any part of the network south of and including Independence Avenue—essentially the southern perimeter of the National Mall.  In some respects, it is understandable that Mayor Bowser would wish to exercise the highest precaution.  Using today’s statistics (obviously higher than on the 22nd of March), Washington DC, when compared with the other 50 states, has the seventh-highest death rate per million, suggesting that the severity of the outbreak’s mortality is worse here than most of the country, add odds with the Unacast findings on social distancing.  Needless to say, these statistics are, much like the Unacast results, somewhat misleading: the District of Columbia receives the same statistical categorization as states, even though it is not a state and is 100% urbanized, and urban areas tend to be the primary vectors for contagion.  As metro areas go, it is difficult to judge if Washington DC is doing worse than other places; it certainly isn’t an epicenter like New York City, nor does it appear to be a hotspot like Detroit or New Orleans.

But state governors—or, in DC’s case, the Mayor—must always carefully weigh these stringent, facially unconstitutional lockdowns with both the inevitable backlash against short-term restrictions on civil liberties and long-term economic consequences.  Perhaps the activity I witnessed on that fine day in March helped propel DC’s exposure and death rate to its current above-average but not quite crisis-level status. 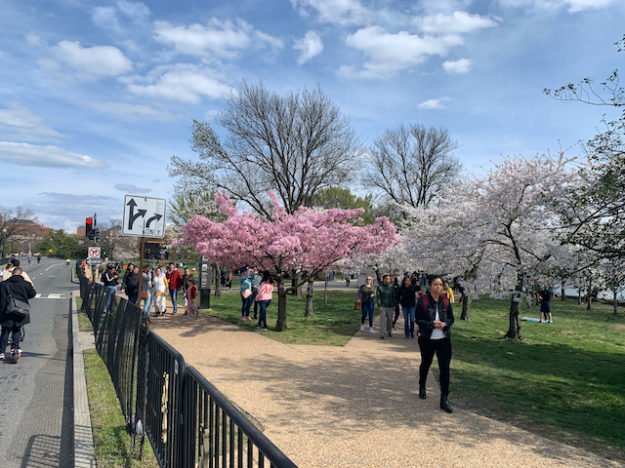 The photos make it obvious that the Tidal Basin encouraged some clustering and leniency toward social distancing that, just a few weeks later (into April) would seem unthinkable.  But this activity also pales in comparison to the crowds at a typical Chinese New Year in New York or Mardi Gras in New Orleans; having been to both events in prior years, it’s easy for me to see how these might have prompted the unusually high case loads in those two cities.  And not everyone at the Tidal Basin that day was complacent. 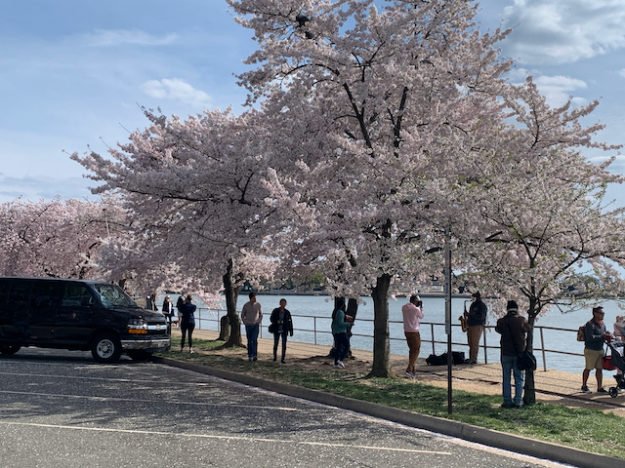 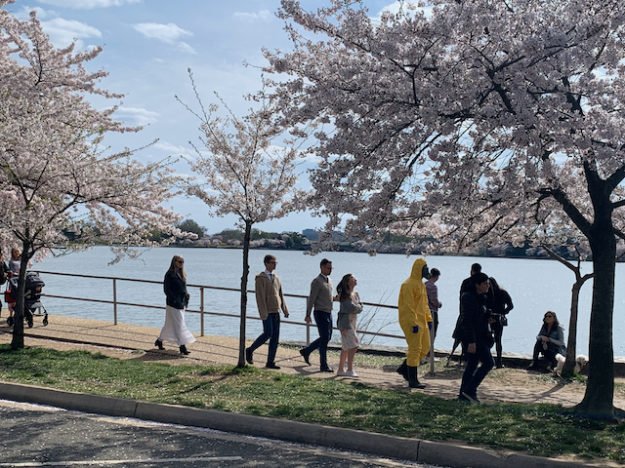 First of all, it’s quite possible that most of the visitors at the Tidal Basin this day were, in fact, out-of-towners.  While that factor should offer no reason to be callous toward the viral spread, it at least suggests this activity is less likely to pose a huge burden to local governance in the same way that, perhaps, a sporting event or even a crowded music concert might—two activities that, although easier to regulate the flow of people, are both more prone to encourage crowding and more likely to affect DC residents disproportionately.. Secondly, the closure of public lands in the event of an emergency is far less drastic and controversial than imposing similar restrictions to private enterprise.  Sure, it’s bad for the economy to thwart a major tourist attraction by closing it down during its peak visitation.  But comparatively few visitors to the cherry blossoms spend money on site; admittance is free, and the economic impact has more to do with ancillary and supportive businesses, not the Tidal Basin itself. As for jobs lost through the closures, the Tidal Basin falls under the exclusive control of the National Park Service.  The only impacted employment base consists of either furloughed NPS workers or the agency’s maintenance contractors.

By the time I[m writing in late April, the blossoms are gone from the trees, and DC’s leadership, no longer fearing overcrowding, has removed many of the restrictions around the Tidal Basin.  It is once again open to runners and bicyclists, since it is sparsely visited.  And here’s where DC’s less draconian measures ultimately seem more humane: an incremental, regularly responsive approach achieves a balance, still poised to favor safety and protect public health, which if amplified unnecessarily, could run roughshod over both the economy and individual rights.  For the most part, people are observing social distancing far more diligently that they were that day in March at the Tidal Basin, and while we anticipate a re-opening of both the remaining closed park lands in the city as well as many private businesses in May, we can also predict most citizens to exercise reasonable precaution for many months to come.  After all, it’s amazing the lengths people are willing to go just to be able to enjoy some fresh air outdoors. 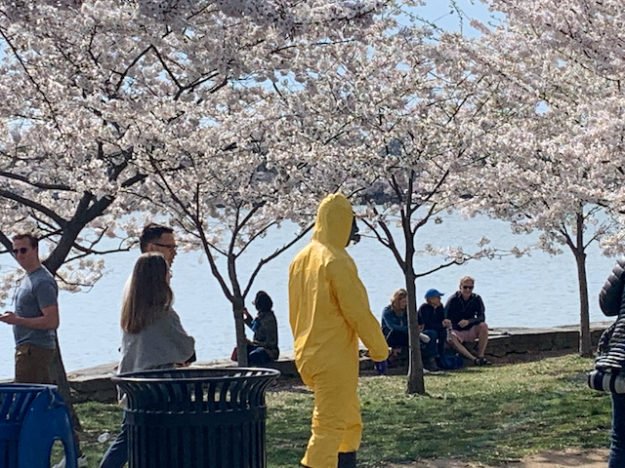 PrevThe quirky house: whether Queen Victoria or Hogwarts, the intrigue survives long after the original owners have departed…if they ever even left.
Carryout and COVID: should the Maine Avenue Fish Market continue normal operations?Next

6 thoughts on “Pandemic in the park: did restrictions around DC’s Tidal Basin help flatten the curve?”