After a few too many COVID-obsessed articles, it’s time to take a breather with a more time-tested topic that I hope will soon become salient in the blogosphere once more: off-line shopping, specifically in the form of malls.  As I prep for articles more substantial, I think I’m at least somewhat overdue for a revisit to a tiny shopping typology that I expect to become more and more prevalent, as the static nature of bricks-and-mortar proves increasingly ineffectual at sheltering the consumers’ increasingly fickle and algorithm-influenced tastes.  So let’s take a trip waaaay back to early February 2020, before lockdown ensnared us, when our malls were still bustling (relatively speaking). 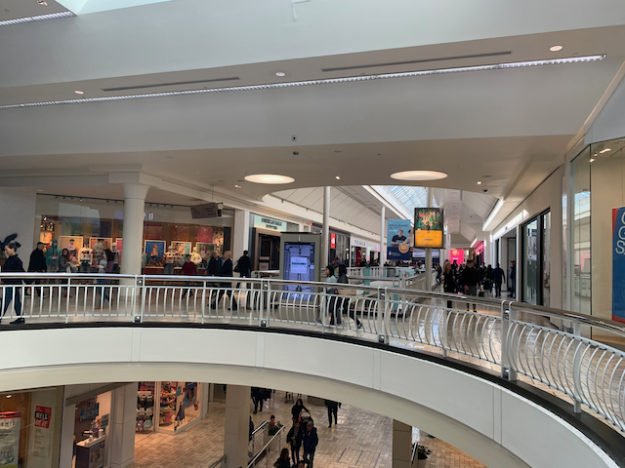 Here we have a view of Tysons Corner Center, part of an expansive retail and office node in the thick of the Washington DC suburbs of northern Virginia.  While far too many malls have faced dire conditions as an increasingly greater share of consumer purchases migrate toward the online domain, this enormous complex of two huge, upscale malls (the even tonier Tysons Galleria is across the street) have held their own.  I’m not going to claim that Tysons Corner Center is bucking the trend—I have no doubt it has faced declining foot traffic like all of the rest—but it has operated from such a lofty perch (typically among the top ten malls in the country for sales per square foot) that it remains much more resilient to the vagaries of consumers.  This mall featured the first Apple Store anywhere in the world.  In spite of its superior fiduciary posture—or perhaps because of it—Tysons Corner Center’s owner and manager, Macerich, has felt compelled to experiment with new shopping typologies to fill its slowly rising vacancy levels.  And in this case, it includes BrandBox. 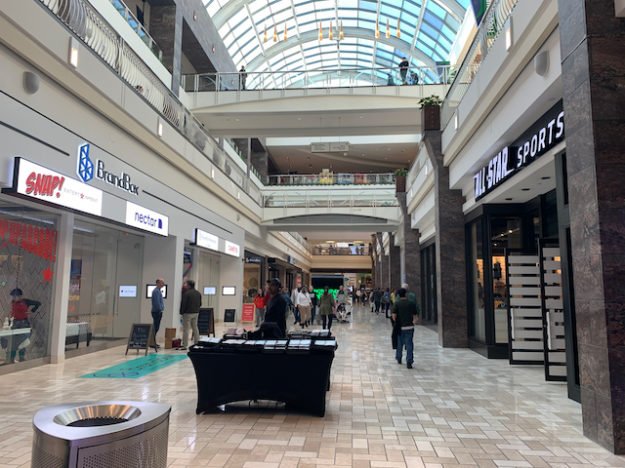 I covered BrandBox in the early summer of 2019.  Just as before, it’s a marketing strategy stretching across several small storefronts at Tysons Corner Center, instilling a common visual theme among fledgling pop-up tenants, many of which began exclusively through online retail, but are now seeking to branch out into bricks-and-mortar.  Typically, these tenants are not well-known names, but they have usually earned enough success that they can pilot a storefront space that will give them greater visibility, knowing all the while that, while online shopping continues to claim an increasing market share, a significant number of people do still travel to malls and big box stores to shop.  And a bold logo atop a storefront is far more likely to command attention than blue text that reflexively appears amidst a score of other hits in a Google search.

When I visited the BrandBox wing at Tysons Corner Center last June, it had completely new tenants, which should come as no surprise; these are pop-ups after all.  Many of them negotiated seasonal leases, perhaps because their focus product enjoys season-specific demand.  Chubbies, for example, specializes in shorts and ultra-casual, beachfront apparel, mostly for men; its peak demand is probably spring and early summer, which explains why it occupied a prominent position last June.  The company is still around, but it no longer has a presence at Tysons Corner Center.  Instead, we get this: 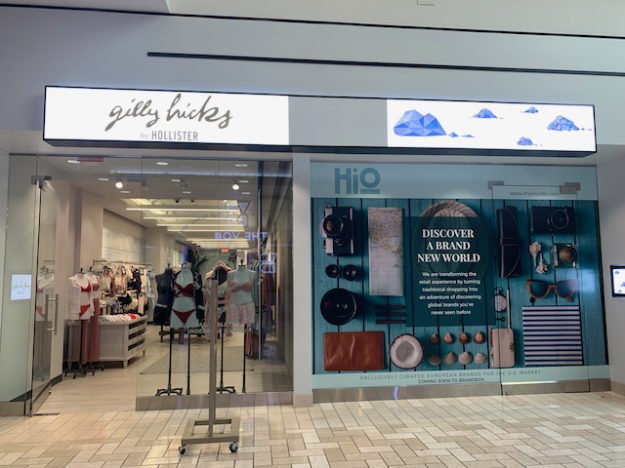 Gilly Hicks, a lingerie spinoff of Hollister, which itself is a spinoff of Abercrombie and Fitch.  If the name rings a bell, it apparently enjoyed a brief life as a separate store from around 2008 to 2013, then retreated to become online only, only to enjoy this renaissance through online sales, featured space within existing Hollister locations, and now, pop-up space like BrandBox.  Gilly Hicks is an outlier though; unlike most BrandBox tenants, it has big-name corporate origins.  Then there’s this: 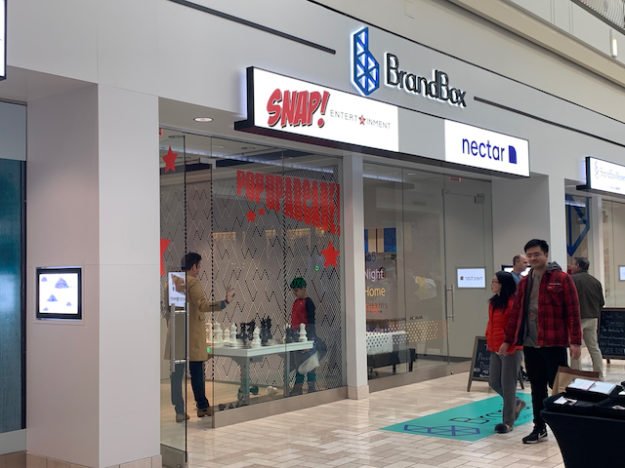 Snap! Entertainment appears to be a sort of events catering company, bringing arcade-style games, photo booths, karaoke, and other products on-demand to enhance weddings, parties, mitzvahs, and so forth.  It’s based in the DC area, on the Maryland side.  Nectar sells mattresses, typically through other well-known mattress vendors; this appears to be the first location uniquely devoted to the product.

And here’s why I think this strategy works so well: 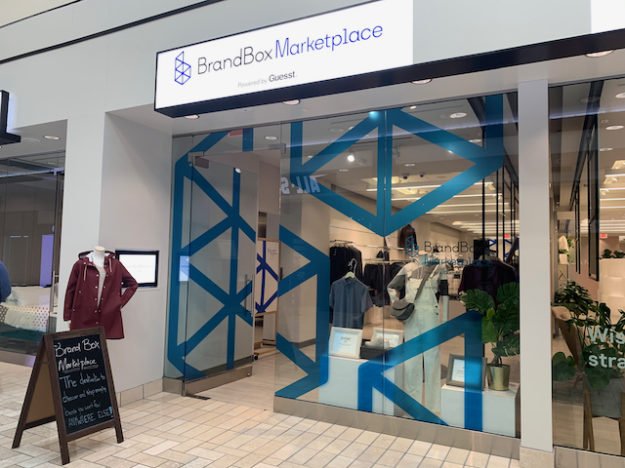 I don’t know much about Guesst, but it seems to be a platform within the existing BrandBox platform—a marketplace so niche that the emergent brands don’t just lease a tiny pop-up storefront, they lease individual shelves and racks.  From what I recall, one of the names featured within Guesst was Rhone, a emergent high-end men’s activewear retailer. 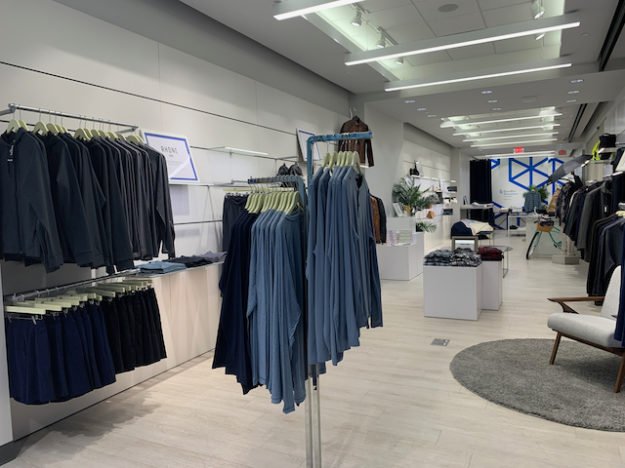 The other names, according to the blog, include THEY New York, Faherty, Hickies, Welden Bags, and SigiKid.  If you haven’t heard of any of them, you’re not alone; they’re all “digitally native brands”.  And here’s additional proof of the versatility of this paradigm. 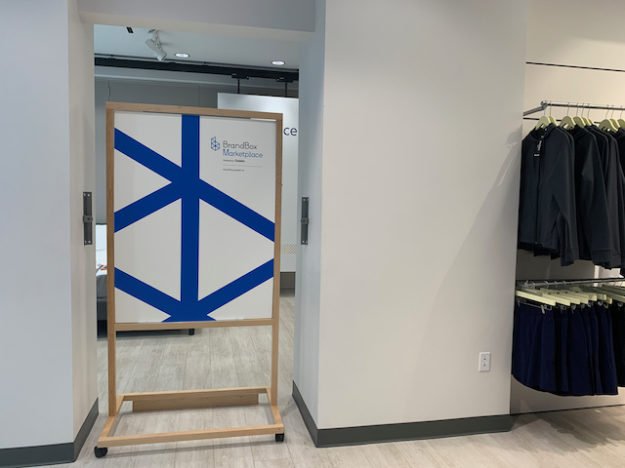 Sure, its just a basic partition.  But if it didn’t exist, it would serve as an opening to an adjacent storefront—or, better yet, an opportunity for a certain brand to expand across a greater floorspace, should it seem desirable.  Then it would be one bigger store; nobody would notice the aperture.

For several years, we heard market analysis extol the virtues of fast fashion—an approach, typically among youth-oriented retailers, of platforming of-the-minute trends in a mass-market layout, using economies of scale (and, I suspect, Asian sweatshops) to deliver trendy clothes at an affordable price.  The merchandise would shift around rapidly to cater to fickle tastes, encouraging repeat visits among the disproportionately youthful and female consumer base.  These budget-oriented customers would doff clothes when they went out of style after 18 months, with nothing to lose because the product was cheap, and their preferred retailer is guaranteed to offer something new.  Among the biggest names in fast fashion historically have been H&M, Forever 21, Zara, and emergent international brands like Uniqlo and Primark.  As recently as 2016, fast fashion seemed to be bucking the trend of imploding retail, generating consistently strong sales while more stalwart companies like Aeropostale and Pacific Sunwear—whose products feature the brand logo heavily in their design—continue to lose market share.  This image of fast fashion’s resiliency took a heavy beating in 2019, however, when Forever 21 (one of the biggest proponents of the approach) announced filing for Chapter 11 bankruptcy protection, coupled with a closure of most of its international stores and a significant retreat within the native US market.  Just a few months later, after considerable liquidation, a consortium of mall operators partnered to purchase the Forever 21 name, consigning the mighty brand to the same fate as floundering dinosaur Aeropostale.  Either fast fashion is on the wane, Forever 21 was overcapitalized (it tended to lease huge, prominent places in high-performing malls, while competitor H&M seemed comfortable locating in budget or underperforming real estate), or even these savvy budget companies aren’t reacting quickly enough to the shifting customer paradigms.

No, this paragraph on fast fashion was not a digression, as should be evidenced from this article’s title.  It still deserves a mention because, even amidst its slip-ups, it remains the most nimble approach to managing retail in a time when online algorithms steer people further and further away from bricks-and-mortar.  BrandBox is just one method of competing in an uncertain climate; the differentiated shelves of Guesst only intensify the disaggregated nature.  Macerich currently only employs BrandBox at Tysons Corner Center, but it plans to expand to two other high-performing malls in Arizona and California in the near future… 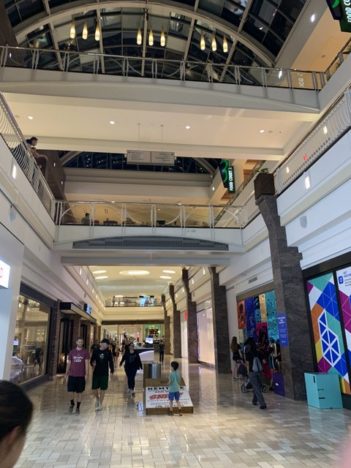 …depending, of course, on the paralysis caused by a novel coronavirus.  It’s impossible to completely ignore COVID.  The absolute shutdown of malls for the last six weeks has exposed yet another scar.  Until recently, high-end department stores like Nordstrom and Saks Fifth Avenue seemed more durable to a changing shopping culture than embattled middle-market names like JCPenney and Sears.  However, the recent announcement of Neiman Marcus’s Chapter 11 bankruptcy filing proves that even the most luxe names are facing vulnerability.  My suspicion is that high-end brands owed their resiliency to the fact that their product transcended online shopping: if you’re spending $1,800 on a blouse, you’re going to want to make sure it fits and you look great in it.  Bloomingdales and Neiman Marcus never generated as much sales volume online because they didn’t need it, while Macy’s and Sears clawed their way to online viability.  But with the malls closed, the luxury brands lost their chief selling point: the personal attention one expects from the well-trained clerks at upmarket department stores, and the capacity to scrutinize details on material, cut, needlework, etc., that just don’t matter enough to the online buyer.  COVID-19 was a punch to the gut for all mall-oriented retailers, but for Neiman Marcus, Saks, and their semblables, that fist had brass knuckles.  Ouch.

Tysons Corner Center has yet to reopen, but in other states that are ending the lockdowns, mall operators are guardedly preparing for customers to return, albeit with limited hours and considerable more time devoted to sanitizing those expansive halls.  Some are even providing free temperature testing.  If foot traffic is meager due to continued fear, it might reinforce social distancing principles but it will be devastating to these malls’ bottom lines.  Yet it may serve as a cattle prod for other mall operators to try BrandBox to fill those widening storefront voids.  A small floor plate is easier to manage, to enforce maximum occupancy, and even to create a sense of scarcity or exclusivity that might permit higher-than-usual price points.  (That Rhone brand sure seemed to attract people with fat wallets; I can’t justify paying over $100 for a shirt I’m supposed to wear at the gym.)  I’m going out on a limb here, but there’s no question that this pandemic will cause at least some temporary, acute economic hardship.  The shrewdest vendors, though, will find ways to maneuver around it.  And brands that align with the shifting taste of the public will prevail, even when 10% of the public has temporarily lost its taste and smell.  Because COVID-19.  Let’s see how Tysons Corner Center surprises us when the Commonwealth of Virginia re-opens later this spring.

PrevCarryout and COVID: should the Maine Avenue Fish Market continue normal operations?
A non-defense of the back alley, from the mean streets of suburban Dallas.Next