Lunges in the time of corona: finding fitness through alternative use of a baseball stadium.

Here in the DMV (District-Maryland-Virginia for those not in the know) it’s interesting to see the effect of the increasing escalation of the “shelter in place” mandate, in terms of how people seek relief from all that time cooped up.  In the last two weeks, even the handful of businesses that could continue operating under some semblance of normalcy have faced the jurisdiction-wide lockdown rules.  Since people can’t consume calories at restaurants, they’ve opted instead for burning them (the calories, not the restaurants).  It’s a condition I’ve noticed here in this region, and others have reported the same to me from elsewhere in the country: amidst social distancing guidelines, more and more people are taking advantage of public parks, particularly the wide-open or linear ones, largely so they can engage in some physical activity, typically a type that doesn’t end with the syllable “-ball”.

What does this mean from a visual standpoint?  Considerably higher numbers of people are out walking, running, or cycling along sidewalks, cycle tracks, bike lanes, or mixed-use paths and greenways, particularly in those neighborhoods and areas with higher concentrations of residences and comparatively fewer employment nodes.  In our downtowns, with few exceptions, tumbleweeds bounce along formerly glutted arterials.  But the neighborhoods nearby are teeming with people, mostly in groups of four or smaller, sometimes headed to a destination, often sunbathing in the park (we’ve had an unusually high number of fine, cloudless spring days here in metro DC), but just as likely engaged in some form of aerobic fitness.

Given that most competitive sports involve some form of physical proximity, it should come as no surprise that “teamless” activities have become so popular out of necessity.  In addition, companies that manufacture home fitness equipment—whether treadmills, free weights, resistance bands, or anything in between—have enjoyed a spike in demand, no doubt prompted through the almost universal closure of gyms and health clubs.  Some pundits have pontificated on whether Americans will emerge from this pandemic with vastly superior fitness: thinner, leaner, lower blood pressure, less easily winded.  I’m not sanguine.  While I’m sure this crisis has impelled a small new contingent to capitalize on long-neglected New Years resolutions, I think in general we’re merely witnessing the diversion of fitness-minded people from old activities deemed unsafe (soccer, basketball, weight training in gyms, aerobics classes) to those deemed appropriately socially distant (running, cycling, yoga, calisthenics).

And necessity proves the mother of invention at no more of an uncanny place than Nationals Park, in DC’s Navy Yard neighborhood. In a normal year, at around 6 pm in early April, the stadium would be glutted with grounds preparing for one of the first games at the start of the Major League Baseball season.  These days, the ballpark is more or less deserted… 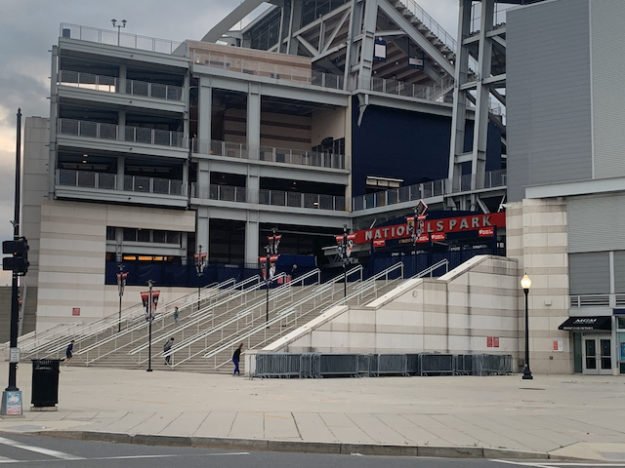 …except for the flights of stairs. 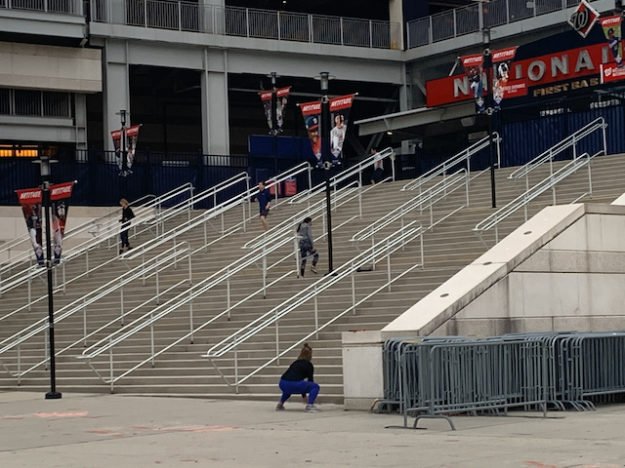 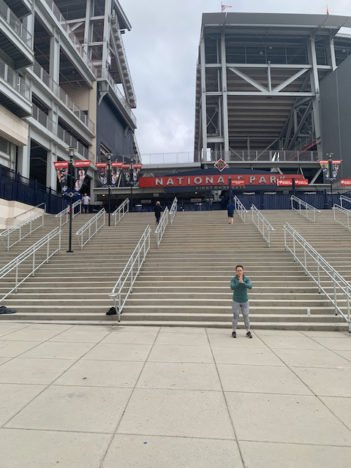 The fit constituents are concluding each day, immured through remote work, by supplementing their runs with strength and stability training.  Lunges, stretches, burpees, perhaps some resistance bands.  And a big, wide staircase gives them a high-intensity setting to diversify the  aerobic activity, all while maintaining the appropriate levels of distancing. Or, at least, distancing for the most part. 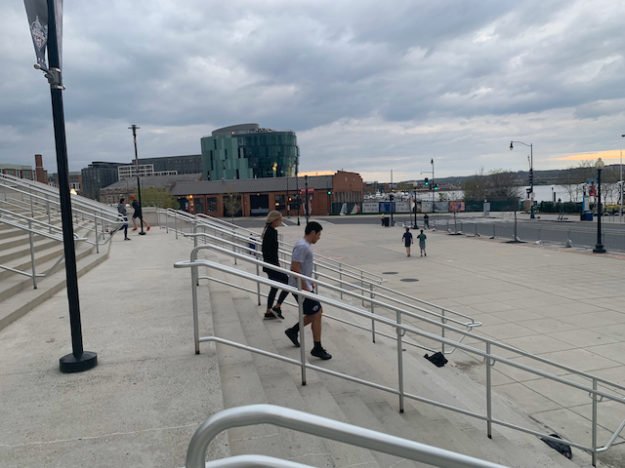 Many of the exercisers train in pairs, so at certain points, this stairwell at Nationals Park gets almost crowded.  Fortunately there are plenty of others ringing the stadium’s perimeter, if that becomes a problem. 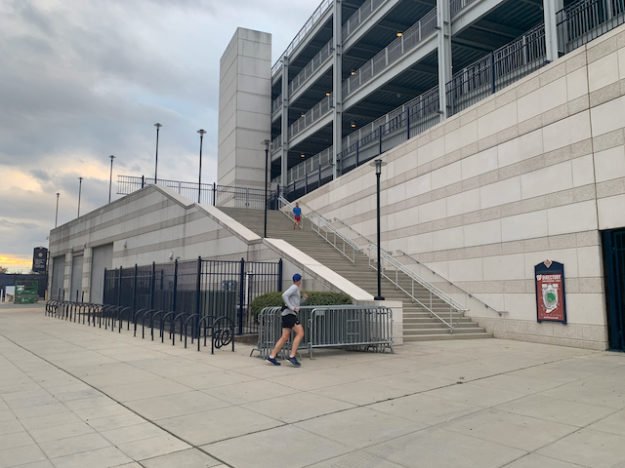 Given the pandemic conditions, however, this is the most used feature to the entire ballpark.  Get to the top of one of these flights of stairs, leading to the entry gate, and this is what one encounters: 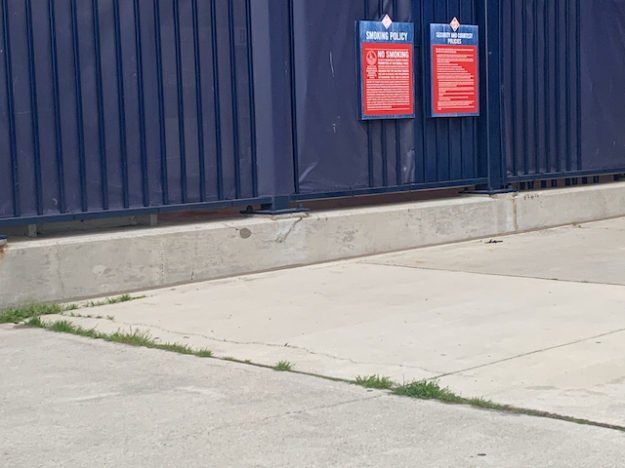 The creeping evidence of the lack of groundskeeping.  In a normal baseball season, the management would have either taken care of these weeds or the crowds would have trod them out of existence.  Not this year.  Already significantly postponed, at this point the odds of even holding a real MLB season are about 50/50, which still leaves baseball fans in better spirits than, say, aficionados of college basketball, who had to kiss all of the NCAA tournament (March Madness) goodbye nearly a month ago.

Given the public’s newfound propensity for group chats (via the now ubiquitous Zoom application, among others) and virtual competitions, it’s hard not to wonder if this will spur new life in running-related sports, which were facing a gradual decline after having achieved “peak marathon” earlier in the previous decade, perhaps due in part to an ever-growing array of running related alternatives: ultramarathons, relays, trail runs, and the brand-heavy race-cum-obstacle-course events (Tough Mudder, Spartan Run, Warrior Dash).  As is characteristic of many other forms of recreation, fitness trends go through vicissitudes, since people tire quickly of doing the same thing over and over.  The comparatively cheap Cross-Fit fad has no doubt receded from its peak popularity in the early 2010s, these days supplanted by the much spendier interval training workshops, most visibly characterized by the ubiquitous (for now) Orange Theory.

But in the wake of the coronavirus pandemic, every one of the aforementioned competitions and members-only fitness venues suffer the reputation of crucibles for contamination, so they’ve closed down entirely.  This means an entire season without such time-honored traditions as the Boston Marathon, which, elite thought it may be, still involves a far greater number of actual participants than an NCAA tournament.  With so many formal events canceled, all that’s left is for us to do is to get creative. 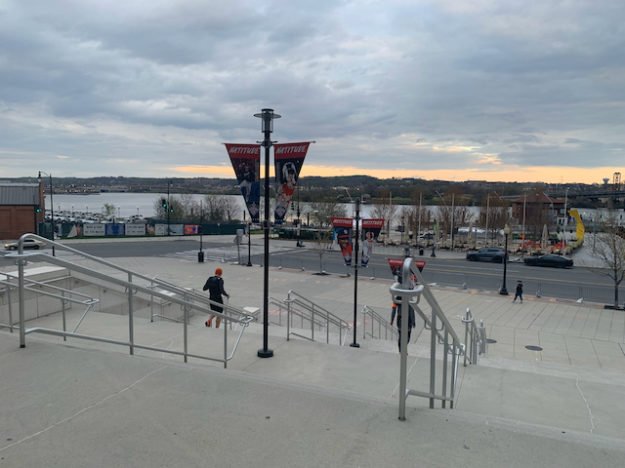 In some respects, the horrors taking place at some of our nation’s hospitals should supersede these day-to-day inconveniences.  I mean, aren’t we arguing from a point of privilege if our biggest frustration is not having easy opportunities for working out?

In defense, for those of us neither suffering or treating coronavirus, it’s in our best interest to remain active participants in the enfeebled economy—practically a civil duty—either by earning our living or perhaps spending a little bit more money at those businesses most overtly affected by the lockdown.  And remaining an active participant in the work force requires at least a pantomime of normalcy.  Sure, we might not usually pursue fitness in such a crude, rudimentary fashion as the steps to a normally active baseball stadium like Nationals Park, but at least there’s a nice riverfront view once you get to the top. 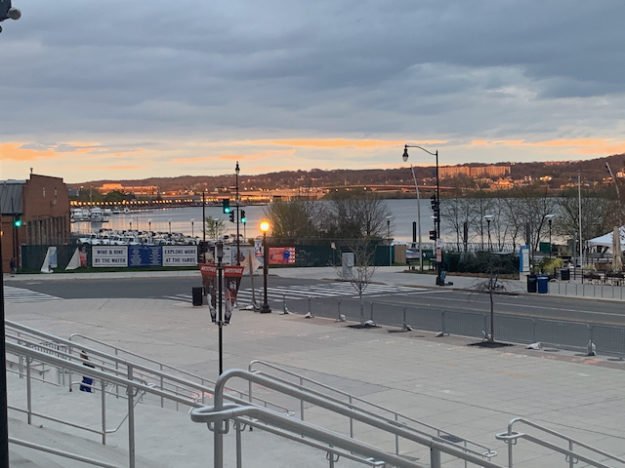 Would I have noticed this if I had been in line at the ballpark’s entry gate on an early spring evening?  Course not.  But, much like the inconveniences in Afghanistan, we develop situational awareness when maneuvering through life amidst an aggressive, invading, colonizing force.  Which are three perfect adjectives to describe that noxious little protein molecule called COVID-19.

PrevPublished porta-potties: rather than shaking off a dusty book, we’re placing that (Afghan) dust back in it.
The quirky house: whether Queen Victoria or Hogwarts, the intrigue survives long after the original owners have departed…if they ever even left.Next

12 thoughts on “Lunges in the time of corona: finding fitness through alternative use of a baseball stadium.”