Social distancing sidestep: the DC restaurants that buck the trend.

I rarely feature material as timely as this; in fact, I deliberately avoid content with a short shelf life, mainly because, if one posts as infrequently as I do, one has little to gain from an article whose relevance will fade within 72 hours, as advancements on the subject quickly supersede it.  But in mid-March 2020, an era of epidemic, this sight is such a rarity that it seemed worthy of a blog post. 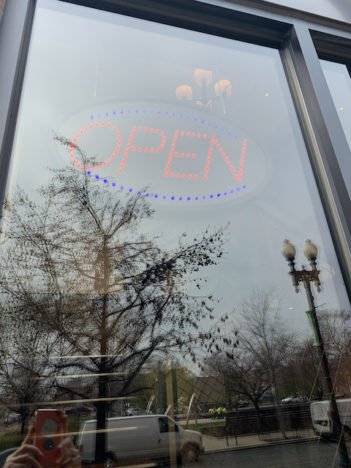 It’s an “open” light outside a restaurant window in Washington DC, and it’s functioning just like they always do.

I’ll leave the business anonymous because I don’t want to incur a rush to this place (a rush would be a blessing and a curse), though I’m sure some of my readers will recognize it.  Regardless, this two-story coffee shop in the Navy Yard neighborhood—one that features the pastries we expect from coffeeshops, as well as some customizable sandwiches—is fully open for business, albeit with reduced hours.  Not just carry-out.  The first floor is the domain of the cashier, barista, restroom, and food on display, and it looks absolutely no different than it did three weeks ago, when COVID-19 was a looming threat but not yet a force that spawned various prophylactic counter-measures from federal, state, and local governments, restricting operability to bars and restaurants by encouraging—if not outright imposing—the social distancing recommended by public health officials to preclude the spread of this highly contagious strain of influenza that can worsen to pneumonia.

Virtually everyone in the country understands this situation already.  If they’re not experiencing it firsthand—which is likely to anyone who lives in a city—they’re well aware of others who are managing with these restrictions, thanks to the relentless media coverage.  So that’s no surprise.  What’s interesting about this Washington DC coffee shop is the second floor, above the food prep, which historically has hosted all of the business’s seating.  Here’s what it looks like now: 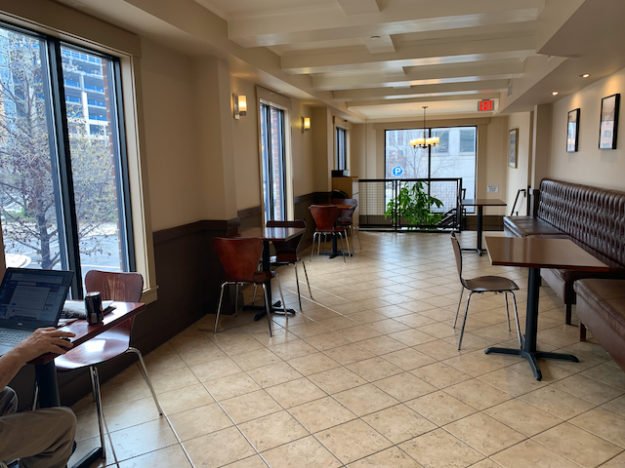 Pretty roomy.  The proprietors have arranged their furniture to meet the Mayor Muriel Bowser’s standards for social distancing: a minimum of six feet separating tables, and no table capable of accommodating more than a party of six.  These standards function like occupancy laws and businesses must undergo scrutiny akin to code enforcement.  In truth, the coffee shop (perhaps inadvertently) abides by the most recent standards of preventing a groups of ten or more.  From the vantage point of this photo, only one other deuce remained, meaning that the establishment offered exactly ten seats with tables.  And what about the rest of the floor space behind me? 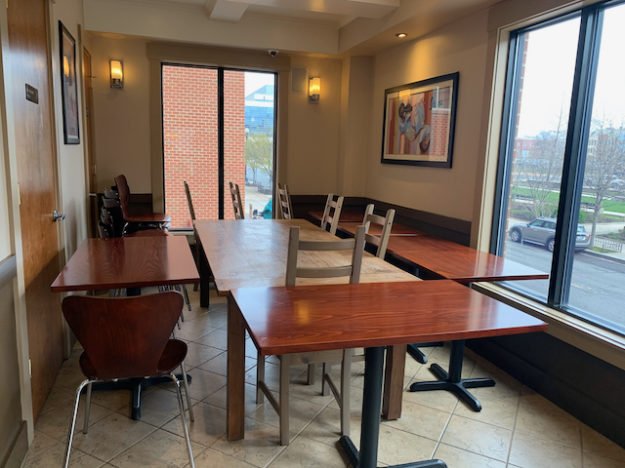 Carefully stacked, but blocking nothing of interest to patrons.  The rearrangement of the furniture here probably took the proprietors less than fifteen minutes, and while the place is operating at far less than normal capacity, at least it’s operating.  And—in an era where most restaurants are disproportionately dependent on carryout—this place can still use its washable cups and saucers.  I can’t imagine the recent spike in the consumption of those wasteful carry-out containers: many of them sturdy and reusable plastic, but just as many become soiled and non-recyclable cardboard/paper, and some establishments still use one of the most environmentally unfriendly materials known to commerce: the notorious polystyrene or Styrofoam.  (But we won’t see that in DC; the District has banned Styrofoam’s use for nearly five years.)

I congratulate the owners of this coffeeshop in particular for finding a way to retain viability during these challenging times, made all the more difficult because of the relentless uncertainty.  Though I’m certain there are others, it’s the only business so far that I have discovered in the District that I can confirm is operating under these conditions, with seating to promote social distancing.  Time will only tell weather these draconian measures restricting restaurants and retail will help “flatten the curve”, because many restaurants and retailers in dense urban environments depend on conditions antithetical to social distancing for their prosperity.  And I have a sneaking suspicion that, upon further judgment, we’ll find that this exercise of police power in the event of a public health catastrophe will disproportionately impact people of moderate means.  After all, most white collar service-oriented businesses (as well as the federal government) can adapt relatively easy to remote working; their most critical and commodifiable activities depend exclusively on laptops and smart phones.  Meanwhile, many blue-collar industries have pushed their work force into employment limbo; their enterprise depends on the physical presence of humans engaged in manual labor in actual buildings.  They had no alternative.

If these social distancing conditions persist, one cannot hold high hopes for the purveyors of durable goods, or for the waitstaff that allow restaurants to hybridize prepared food with a service-oriented experience.  If the COVID-19 threat looms for weeks or months, it may only amplify the woes that the retail sector has suffered for years, all while giving Grubhub, Doordash, and Amazon (the juggernaut most responsible for the retail apocalypse) an added boost.  I’ve pondered in the past that kitchens may increasingly form a commercial undertaking divorced from restaurants: in this era of food trucks and take-out counters, let alone remote ordering and food delivery apps, the idea of patronizing a restaurant to sit down and receive table service may soon become passé.  Conversely, other entertainment-centered services that once featured kitchens may decide that in-house food prep is too expensive (or too risky), turning instead into venues that mere host people for large events and featured catered food, or eliminating food altogether and devolving into nightclubs.  Time will only tell, but regardless of how long this lasts, the retail and restaurant landscape will almost certainly look very different when we re-emerge from quarantine for that collective sigh of relief amidst unpoisoned air.

[UPDATE: As of April 1st, in response to the District-wide enforcement of “shelter in place”, non-essential businesses have closed.  Though this coffee shop remains open, the seating is off limits, and, like all other restaurant businesses, it is carryout-only.]

24 thoughts on “Social distancing sidestep: the DC restaurants that buck the trend.”