Published porta-potties: rather than shaking off a dusty book, we’re placing that (Afghan) dust back in it.

I’m not a professional photographer, as is probably obvious to anyone who is.  I cannot offer anything resembling the sophisticated understanding of photography as an art or discipline that Steve Polston can (who I featured here a few years ago).  Most of the time I take photos with a smart phone, and while I have an okay understanding of composition, I can rarely concern myself with light, hue, saturation, or contrast.  Half the time, I have to be subtle when I take my photos or they could attract suspicion.  Therefore, no bulky camera for me.

Though once in a blue moon I feel I achieve a pic (usually unintentionally) with some great richness, generally my photos are first and foremost demonstrative.  They serve to inform or enhance the narrative in my blogs.  On rare occasion, though, they capture enough interest, both as a narrative enhancement and as an aesthetic positioning, that I receive a request from another author to use a photo.  The last time, back in 2015, Judith Kerman featured my pic of a blighted strip mall as the cover of her poetry anthology, Postcards from America.  This time around, author Fritz Stokes is using something even more picturesque: 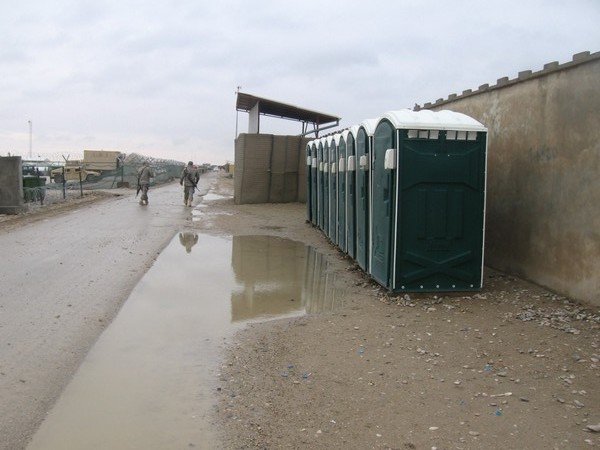 It’s a row of porta-potties on a rare rainy day in northern Afghanistan, where I worked from fall 2010 to early spring 2012.  Stokes, a Gulf War veteran, is featuring this photo in his new work, I Wonder What My Marine Is Doing Now: A Day In The Life Of A Deployed Marine, a book targeting elementary age children to give them a sense of day-to-day inconveniences for their Marine parents while deployed.  The photo appears midway through the book, and is currently available at this site, though Amazon and Barnes and Noble should carry it soon.

This should come as no surprise, considering that I’ve featured restrooms/toilets (and the bizarre amenities that businesses juxtapose with them) for analysis quite a few times over the years.  But it’s important to set the record straight: though porta-potties are indeed a common feature throughout the landscape of a military installation in theater—ideally complete with a replenished dispenser of hand sanitizer (even more relevant today)—they are hardly the status quo.  Porta-potties are the sub-optimal emergency.  Latrines always feature toilets, ideally ones that flush, and the rare permanent structures on installations in Afghanistan would have facilities largely indistinguishable from public restrooms in the US…except that a broken toilet would likely go months before getting repaired.  And, quite importantly, dining facilities virtually never offer toilets in the vicinity; you either have to hold it in or go outside to the closest row of porta-potties.  So, depending on the reader’s perspective, the typical day on a base in hostile territory would seem more or less rustic than one might expect.

I congratulate Mr. Stokes on the completion of his book, and I think him for choosing my image to help supplement this important educational tool.  Keep reading and keep the comments coming.

PrevMothballed for medical reasons?  Retailers react differently amidst a pandemic’s uncertainty.
Lunges in the time of corona: finding fitness through alternative use of a baseball stadium.Next

3 thoughts on “Published porta-potties: rather than shaking off a dusty book, we’re placing that (Afghan) dust back in it. ”