So, from my previous article on social distancing and DC’s only coffee shop with interior seating (that I’m aware of), I’ve concluded that the readership here actually likes articles that are timely and of-the-moment.  No surprise.  Given the rewards I reap in terms of conversation and clicks (all intellectual, none financial!) I’ll probably keep doing it from time to time.  A sort of “report from the plague”, particularly reflective of how the nation’s capital treats this COVID-19 disaster, which in some respects has been different from Virginia or Maryland just a few miles away.  Only on Wednesday evening, in fact, did Washington go into full “lockdown mode”, in terms of mandatory closure of all non-essential businesses.

But a few places in DC took the cue a bit earlier.  Here’s the scene around Eastern Market shortly before Mayor Muriel Bowser’s lockdown decree. 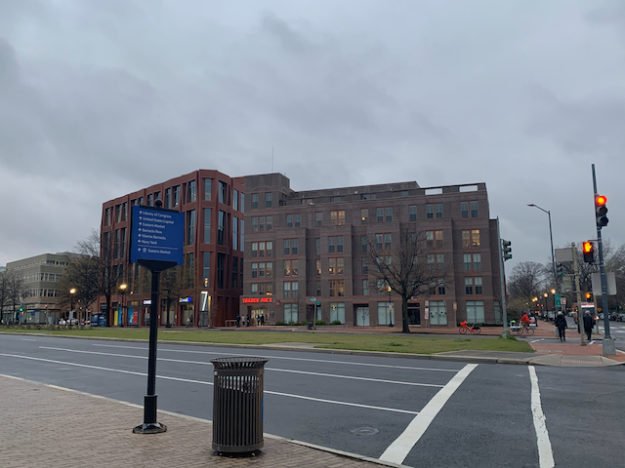 These two new mid-rise apartment buildings, having replaced an aging (but not historic) middle school, capitalize on their proximity to the Eastern Market WMATA Metro Station (the subway) immediately across the street.  Not only are they a higher-value use than a public school (most of whose students could relocate to a newer facility about a quarter-mile away), but they help instill more density and pedestrian activity at this historic commercial node, anchored by the historic Eastern Market building a block to the north.  And, as is obvious from the signage and fenestration, the buildings feature retail on the first floor.  The active red glow of the “Trader Joe’s” should indicate that it is still in operation during the COVID-19 lockdown; not surprisingly, grocery stores usually pass muster as essential businesses.  But what about that other building just to the left? 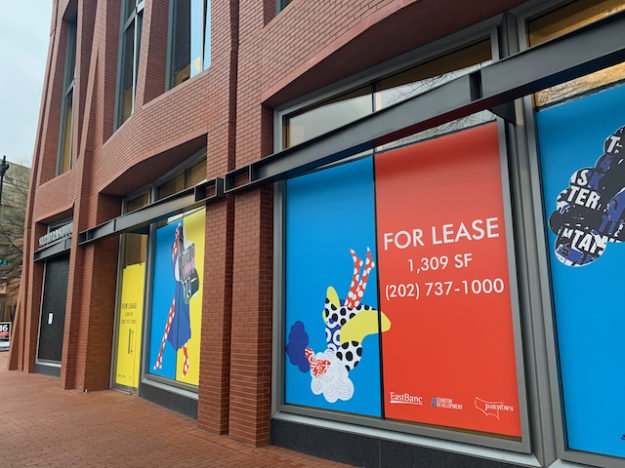 Some of the storefronts have not yet found a tenant and are luring prospective retailers with garish promotional displays.  Others have chosen the opposite approach, filling their windows with charcoal black. 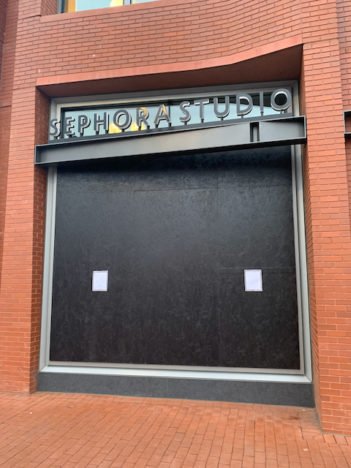 But the blackened storefront isn’t vacant; it’s a Sephora Studios, a branch of the French cosmetics mega-chain.  And not only did it decide to shutter completely, the staff mothballed the place. 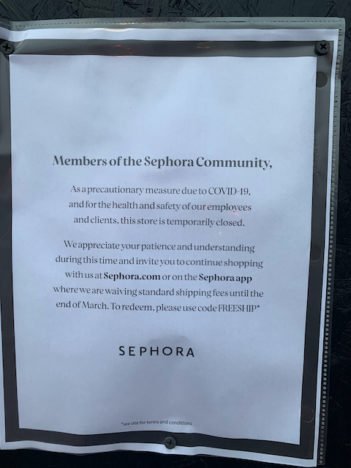 The small printed sign is familiar: it’s typical of storefronts throughout the District right now, in terms of places that have suspended operations in response to the pandemic’s uncertainty.  But few have taken such extreme measures as Sephora. 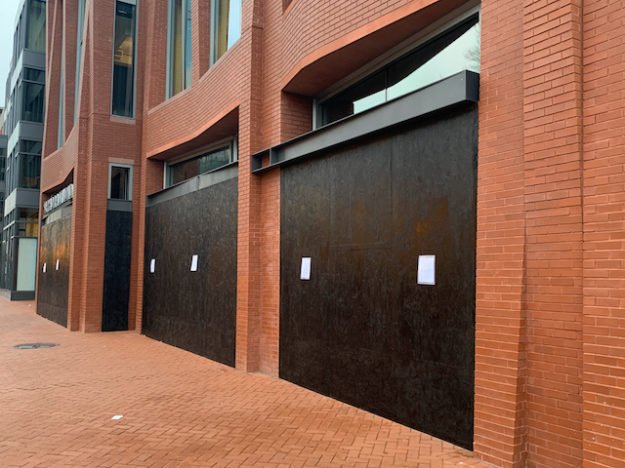 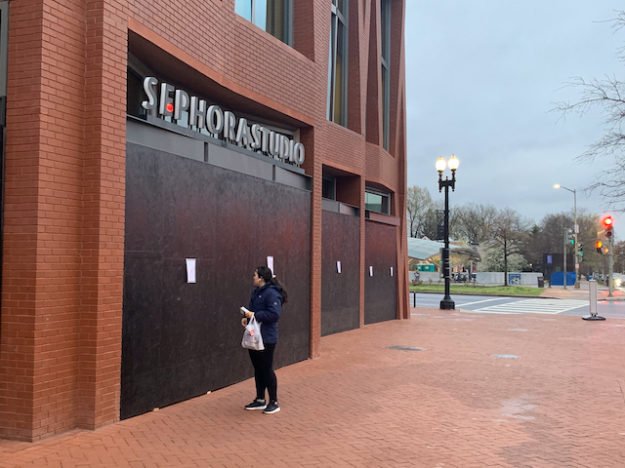 But you have to hand it to them: their devotion to an elegantly, consistently mothballed façade is incredible; they even got the tiny, awkwardly placed windows. 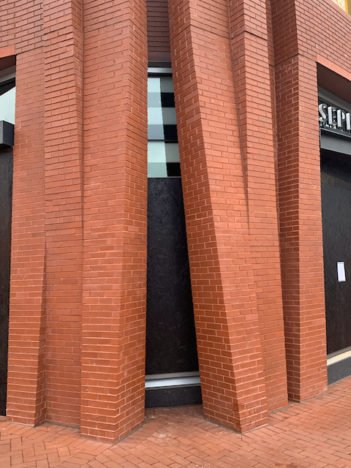 And the staff at Sephora even took the time to paint the plywood a subtler, more attractive black; when I came by a few days earlier, it was still the natural wood color.

For those of us who have lived in areas susceptible to hurricanes—which I’d wager is about one-third of the nation’s population—the plywood on the windows is a familiar sight.  DC is not a city likely ever to suffer the direct impact of a hurricane-like storm, so boarded-up storefronts to a pricey retailer in a prosperous area is a bit jarring.  It may seem like a knee-jerk and almost irrational response, given that a pandemic is nothing like a hurricane.  But the plywood on storefronts serves much the same purpose during both disasters: it is less a protection from natural forces as human ones.  No surprise really, but Sephora’s leadership seems to think a) there’s no financial benefit to staying open under CDC social distancing mandates; b) this situation is going to affect operations for quite some time; c) it’s better to protect against theft through a mothballed, low-maintenance condition than a visibly closed storefront display that requires monitoring.  At this point in late March, Sephora is going it alone.  None of the other storefronts around Eastern Market have made it so obvious that they closed for the foreseeable future. 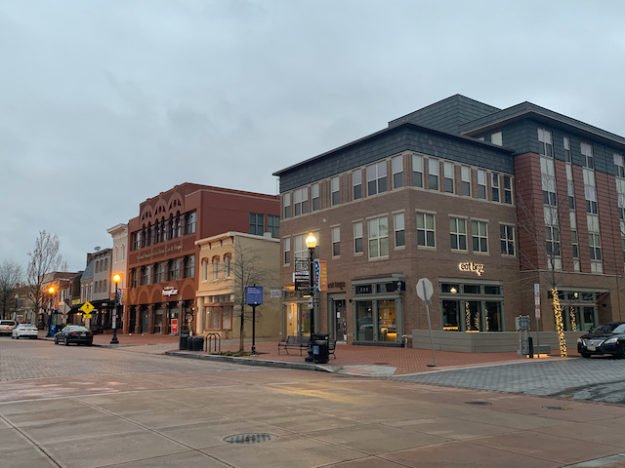 Why is a mothballed state likely the best method for Sephora to address this disaster’s uncertainty?

I’m the last one who probably should be analyzing the operations of a cosmetics shop, but I’m going to give it a try.  The merchandise within Sephora is reasonably high value but also non-perishable.  This is a condition Sephora could easily share with retailers of electronics, clothing, appliances, bicycles, and many others that may have remained operative prior to the lockdown, all while enforcing social distancing and limited patronage to ten people or less.  But cosmetic retailers depend more on people remaining in close proximity, while the sampling of make-up—part of the shopping experience—would turn a place like Sephora into a potential cesspool for infectious disease or viruses.  And unlike, say, nail salons, barber shops, tattoo parlors, or massage studios—where the simple donning of a face mask can help preclude the spread of airborne disease—a cosmetic shop depends on the full visibility of the face.  Make-up celebrates the human countenance.  How can Sephora promote its products through sales clerks if 60% of their faces are concealed?  Lastly, there’s probably reduced demand for make-up for the same reason there’s low demand for pricey new clothes, or dry cleaners and laundromats, for that matter.  With everyone ensconced in their homes, there’s just less of a need for looking good.  Taking these facets of operations into consideration, Sephora’s mothballed state may have just as much to do with eschewing liability and brand degeneration as it does with safeguarding against theft.  And who are we to begrudge them of this?  It’s still plenty easy to order their products online.

Across Pennsylvania Avenue from the Sephora and equally close to the Eastern Market Metro stop, another widely known global chain has taken a different response to the pandemic. 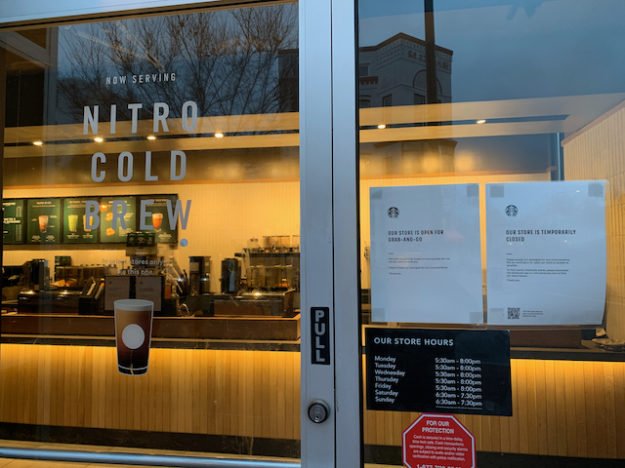 Like restaurants, coffee shops are not subject to the same restrictions as the self-care services referenced in the previous paragraph.  They can still accommodate carry-out customers and deliveries.  But this Starbucks is reacting more pointedly than most. 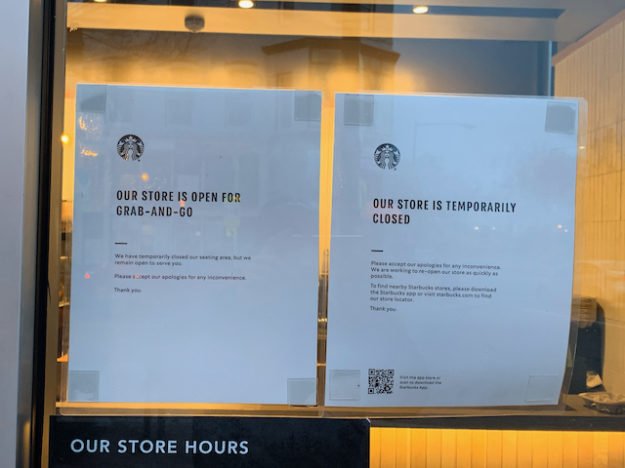 Confusing, contradictory signage aside, this location seems to be adapting well to an environment where customers cannot linger.  Just take a look at the interior. 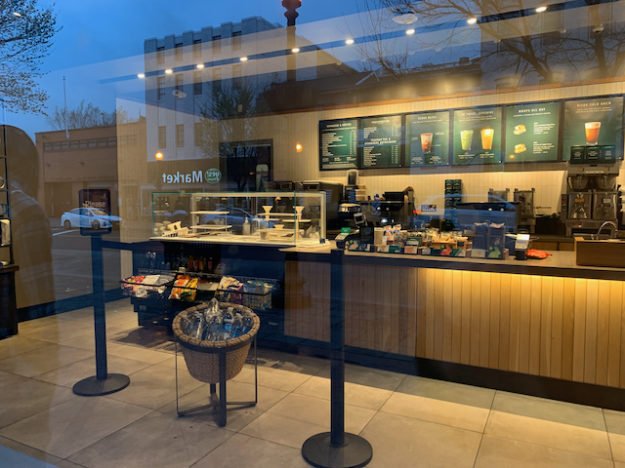 It’s a smaller Starbucks than average, and this photo probably captures over half of the floor space.  Take my word on it: this Starbucks had no seating whatsoever.  Outside of maybe an occasional coffee kiosk in partnership with the primary tenant (in a hotel, casino, or a department store), I’ve never seen a fully autonomous Starbucks without a single place to sit.  In the past, this Eastern Market location had a communal table and a row of stools along the window.  Now they’re all gone.

I’ll concede that I don’t know when they removed the furniture; those photos are a few years old, and Starbucks might have made the decision a long before the pandemic was immanent (loitering tends to be a problem outside this location).  But this is not the status quo for the company, which typically encourages people to sit and sip because having reasonable crowds in an establishment is some of the best publicity a retailer can get.  However, with social distancing enforced, Starbucks may have decided to play it safe and reinforce the policy of carryout only.  And if extracting furniture is as good a technique as mothballed with plywood for weathering the uncertainty, I tip my hat to any and all businesses with the resiliency and resourcefulness to navigate around all the hurdles being thrown their way—both biological and legislative.

PrevSocial distancing sidestep: the DC restaurants that buck the trend.
Published porta-potties: rather than shaking off a dusty book, we’re placing that (Afghan) dust back in it. Next

16 thoughts on “Mothballed for medical reasons?  Retailers react differently amidst a pandemic’s uncertainty.”