I’ll concede at this point that small town revitalization has become sufficiently commonplace that finding a new example is hardly revelatory, even for those who aren’t really attuned to that sort of thing…because they never visit small towns, or because they just don’t care.  It’s even less of a surprise if the municipality in question used to be a freestanding town, but, over the years, the suburban encroachment from a mega-city 30 miles to the south has engulfed it.  In fact, in those examples, it’s almost inevitable that any surviving historic main street would revitalize.

But it’s still interesting to think about the process—about the means that a small town is trying rural area experiences a surge in growth, it will likely assume a radically different appearance than a fully autonomous small town that has reinvented its main street without a massive influx of population.  Bearing this in mind, the community of Lake Dallas, Texas, offers lessons both for other cities that didn’t reinvest in their historic core, for those that are anticipating growth in the years ahead, and for the growing pains these sort of communities continue to face, even if the general impression they leave is one of prosperity.

The name Lake Dallas is a bit of a conundrum in itself.  Though first settled in 1852 under the name of Garza, it didn’t really earn an identity as a lakeside community until the early 1950s, a good quarter-century after a private company dammed the Elm Fork of the Trinity River (the primary waterway flowing through the City of Dallas).  Through the Garza Dam of 1927, the original “Lake” (reservoir) Dallas—at that time a considerable distance from any major urbanization—served as the municipal water supply for Dallas, as well as a means of flood prevention.  The locals unofficially renamed their community from Garza to Lake Dallas, in reference to the new, prominent geographic feature.  But the reservoir proved inadequate as both a freshwater source and a flood mitigation tool for the rapidly growing Texas city to the south, so the US Army Corps of Engineers designed an additional dam in the late 1940s, combining the existing Lake Dallas with two additional tributaries.  This massive undertaking, named the Lewisville Dam and completed in 1957 through the breaching of the old Garza Dam, quadrupled the shoreline to Lake Dallas and resulted in a water body measuring over 45 square miles.  (Lewisville is another, much larger suburb just that abuts the southern shore of the lake.)  The federal government ultimately determined that the radically altered reservoir should assume the name Lewisville Lake, meaning that the primary community—first called Garza and then Lake Dallas—has never really caught up to the engineering changes that induced its proliferation in recent decades, when, after incorporating in 1965, it finally surged from 1,400 people in 1970 to nearly 8,000 today.  The Lake Dallas of 2020 is exclusively a town, not a lake.

This population growth is hardly extraordinary by Texas standards—after all, the city of Lewisville just across the lake has similar rural origins but now claims over 100,000 inhabitants—but the changes that Lake Dallas has faced pose a challenge for its tiny historic center.  Although about 75% of the municipality’s land falls within various residential categories (according to the Zoning Map), the Town has also clearly reinforced its historic Main Street through a downtown overlay district that reinforces the walkable character that defined Lake Dallas back when it was a sleepy, unincorporated village, perhaps even stretching back a time when locals still called it “Garza”.  Here’s a view on the south side of Main Street: 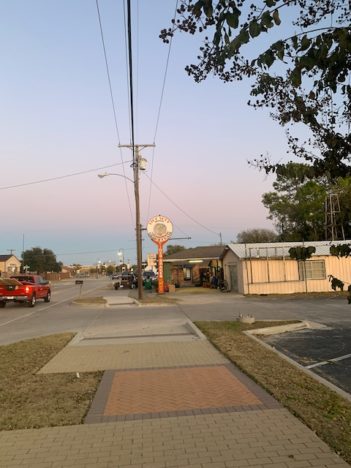 If the above photo doesn’t look like much, it’s critical to place Lake Dallas within its growth trajectory.  It was little more than a train depot and a cluster of homes in its Garza days, and it didn’t really surge until the construction of the Lewisville Dam and renaming of the expanded body of water to Lewisville Lake in the 1950s—the same time period that auto-oriented suburbanization first achieved a mystique among the growing American middle class.  Therefore, Lake Dallas really owes most of its population growth to the automobile; the vast expanses of Lewisville Lake only turned into a popular summer recreation destination when the average household in Dallas could pitch a tent (or build a weekend home) after arriving there by car.  As a result, the Town of Lake Dallas never had much of a commercial core, and even the oldest structures oriented themselves at least in part toward the automobile.  And the rest of the town is completely automobile-oriented in character.

But Main Street at least serves as a spine, connecting a dozen or so commercial uses with some of the oldest surviving and housing and a few critical civic buildings, all with some basic degree of pedestrian accommodation.

The north side is more revealing: 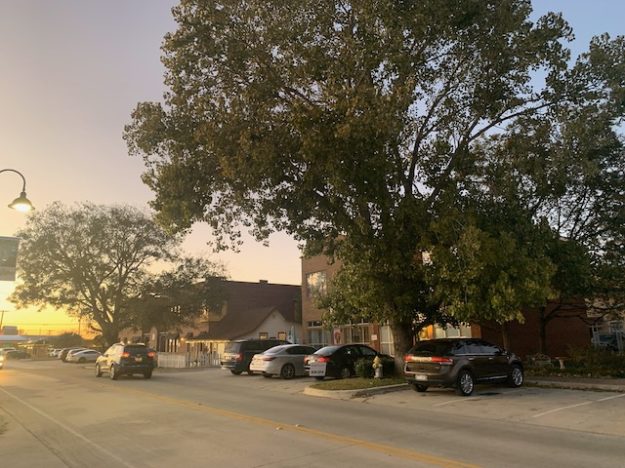 Here we encounter a full block of a continuous street wall.  It’s tiny.  But it offers clear visual cues, like on-street parking, two-story brick buildings, storefront windows, and a bungalow or two, all of which are enough to signal to the visitor (even if unconsciously) that this comprises the downtown to Lake Dallas.

A couple of these buildings are clearly infill. 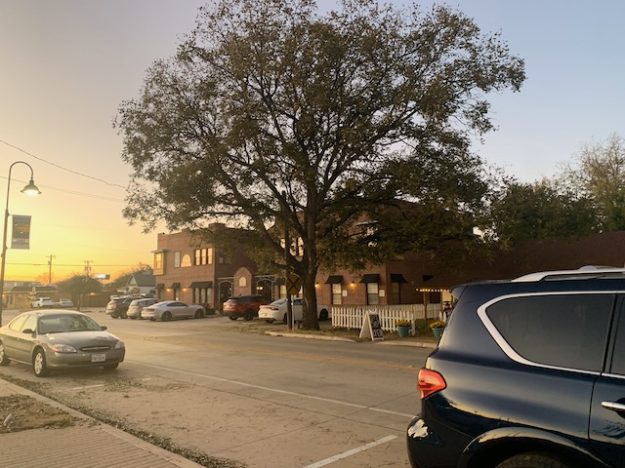 This unusual commercial building does not align with the standards for 19th century main street architecture: it is far too broad, the first-floor windows aren’t good for retail displays, and the apertures in the middle lead to an anachronistic courtyard.  Also, the generous setback from the street allows for quasi on-street parking with right-angle entry, instead of the zero-setback standard typical of most 19th century main streets.  In other words, the developer took a big chomp out of the property itself to build these parking spaces, recognizing the need to accommodate cars.  But the building can still host a variety of commercial tenants in multiple configurations, adding density of use and a variety of private-sector services.  And, if the parking proves inadequate, the City of Lake Dallas clearly modified the opposite side of Main Street to furnish a handful of on-street, parallel-oriented parking spaces, right next to the curb and sidewalk.

Two doors down, we encounter another infill development. 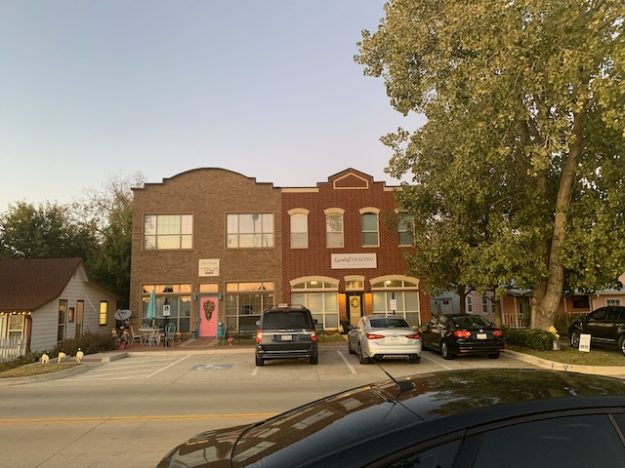 Though intended to look like two separate commercial buildings, it’s clearly the brainchild of a single developer.  Retail on the first floor and apartments on the upper levels, and, like the previous building, the structure’s setback from Main Street is enough to host a small number of “teaser” parking spaces.  It’s not earth-shattering, but it’s a clear reference to a historic configuration, before cars overtook everything.  Apparently, the parcels that host this recent infill project used to serve old residential uses (like the little cottages that flank this building on the left and right edges to the photo).  And the parcel stretches all the way back to the next street, so Market Street (the next block north) hosts two similar commercial buildings that share generally concealed parking lot with the pair featured in the photo above.

But for my money, the best decision for inducing Main Street with energy is right on the parcel where I took the majority of these photos. 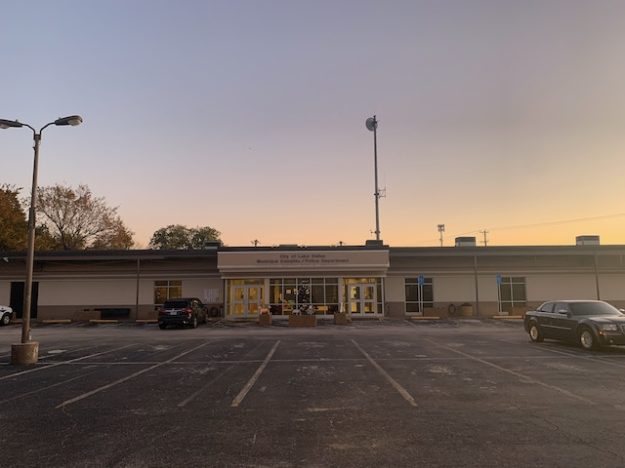 It’s the town’s municipal building and home to its police department.  And it doesn’t look like much, but I can almost guarantee that the majority of the windows (aside from the entry) are a late addition to the structure.  How to tell?  I’ll admit I have an insider scoop: this building previously served as the town’s largest grocery store.  The low-slung, flat roof is typical of supermarket construction from the middle of the twentieth century, and what today is the office lobby used to be a vestibule that housed the shopping carts. 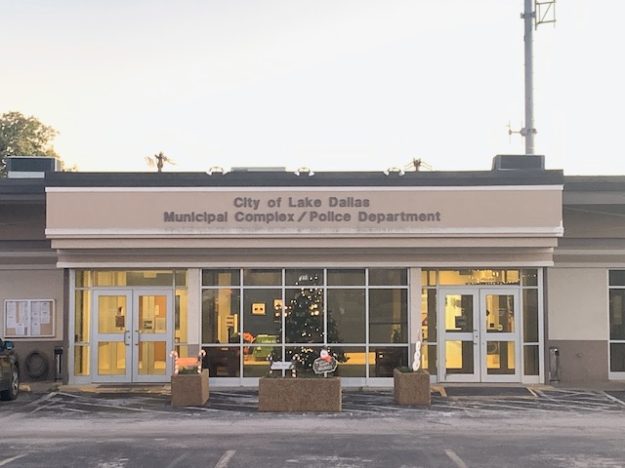 While I usually have a good eye for adaptive re-use, I don’t think I would have caught this one.  It just didn’t occur to me that an old grocery store would get converted—something I imagine happened at least three decades ago.  From what I gather, this supermarket was right-sized for the Lake Dallas of 1970s, when it was still a bedroom community with a primarily rural character.  But as the city grew, it needed a more modern supermarket facility and a bigger parking lot; these days, an Albertson’s a mile away and just outside the municipal limits has supplanted this facility.  I suspect this building sat vacant many years before the Town of Lake Dallas adopted it for the majority of municipal services.  From a city management perspective, it’s not optimal: a prime parcel on the main street has devolved into a public use, conferring no benefit in terms of property tax revenue.  But at the same time, it has a magnetic importance for the entirety of Lake Dallas’s citizenry, nearly all of whom will need to pay a visit from time to time.  It also claims a consistent work force, and there’s almost no chance that it will ever shut down, unless municipal services need to relocate to a larger building someday.  This converted supermarket serves as a shot in the arm to Main Street, as the parking lot is replete with municipal workers who may use the nearby services or eat at the restaurants during the work week.  And it almost creates a dumbbell structure, in terms of density of activity.  Here on the west side of main street is this municipal building, and, in the eastern distance in the photo below, is the Lake Dallas Elementary School. 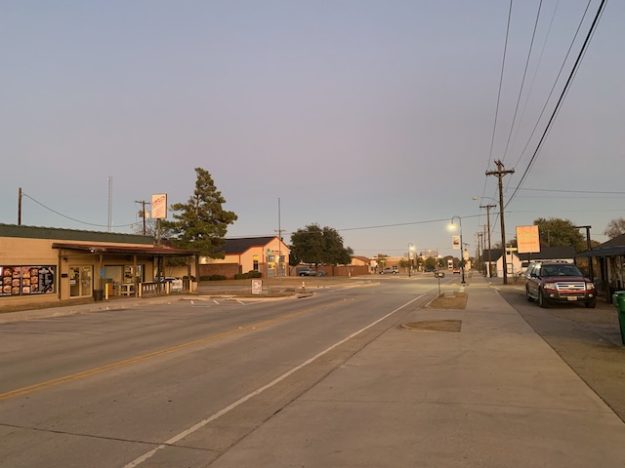 The civic nodes serve as bookends to the private-sector commercial activity in the middle. 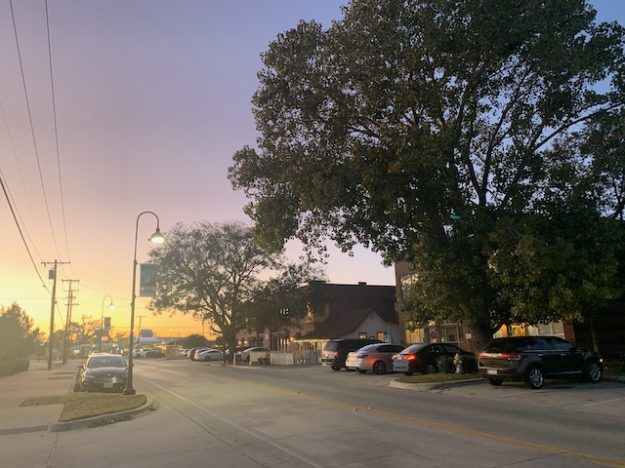 I feel I’ve used the disclaimer “it isn’t much, but…” far too many times in this depiction of Lake Dallas.  The main street adaptations reveal a far greater commitment to reasserting the nucleus to a town that could have surrendered itself to auto-centric decentralization.  Countless other communities share the growth patterns of Lake Dallas, and, in many instances, the civic leadership has determined that the old historic core—often nothing more than an intersection—could be put to better use by demolishing all the old buildings and constructing a strip mall and a gas station.  Lake Dallas has shown the prescience that could someday turn it into a flourishing suburb recognized throughout the Dallas-Fort Worth Metroplex.  And who knows?  Maybe its aspirations are even bigger than that.  This is Texas, after all.