Wegmans: the grocer whose Valentine’s offering has got some real meat on it.

I generally shy away from seasonal postings, but sometimes it’s hard to resist.  And since I’ve got several irons in the fire right now regarding bigger, weightier, more robust posts, I feel compelled to send out some Valentine’s Day wishes…in the form of some choice cuts of meat. 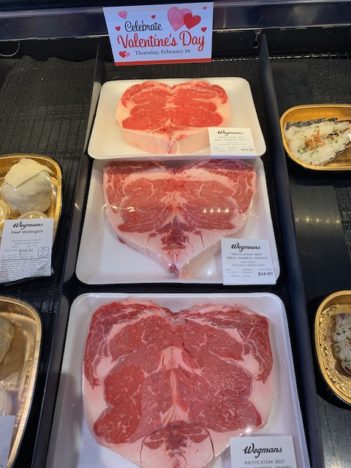 While rib-eye steak isn’t everyone’s top pick for an aphrodisiac, I’m sure it’s the main course of more than a few choice candlelit dinners.  So why shouldn’t a grocery store accommodate for those who opt to celebrate by dining at home?

The heart-shaped cuts of meat are, as indicated by the logo on the sticker, courtesy of a Wegmans in Northern Virginia, right there at the entry.  For those living west of the Appalachians and/or south of Raleigh, the name “Wegmans” probably doesn’t mean a great deal—perhaps a vague recognition that it’s a grocery store.  But, much like the Cincinnati-based Jungle Jim’s that I blogged about a few weeks ago, Wegmans has accrued a cult-like loyalty in the relatively small number of metros where it has a presence.  (And, like Jungle Jim’s, it owes its origins as little more than a produce stand, having begun as Rochester Fruit and Vegetable Company in 1916.)  In some ways, Wegmans’ acclaim is a bigger accomplishment than Jungle Jim’s, since Jungle Jim’s owes its cult to its scarcity; it’s easy to achieve a rabid, insider’s-club following when there are only two locations.  As of 2020, Wegmans has just over 100 locations, yet it achieves a uniformly high level of esteem across its seven-state region.  It’s growing very slowly—at a rate of only two to three per year—which helps generate more promotional fanfare whenever a new location opens.  And this conservative growth strategy has allowed Wegmans corporate to make judicious site selection decisions—so cautious, in fact, that I can find evidence of only one branch that has closed over the years: at its hometown’s failed urban mall, Midtown Plaza, back in the 1990s.

But is a slow rollout really enough to explain Wegmans’ success over these years?  Or—corny though it may seem—does it have more to do with the heart-shaped ribeye in the vestibule?  The corporate boardroom might argue the former; I’d opt for the latter.  These whimsical individual touches may not offer much in terms of an internal rate of return, but it echoes the cheeky humor at Jungle Jim’s, coupled with the evocation of an upscale customer experience without noticeably inflated prices.  Every Wegman’s has a meticulously maintained produce wing and generous international food section—not as vast as its Cincinnati counterpart, but far greater than the typical supermarket—and most also feature an extensive prepared foods mini-market (baker, butcher, fishmonger) and self-serve buffet section, along with an attractive seating area more reminiscent of a Whole Foods than a corporate cafeteria.  Many Wegmans have rentable events space; some even feature pubs that host live music, trivia, or a poetry slam on select nights.  And every Wegmans that I’ve visited features, as a cute little lagniappe, a signature miniature train cycling its course on an elevated track, just a few feet out of the customers’ reach.  The chain exposes a few mild deficiencies: prices are a bit higher than the standard middlebrow grocer (about 5% higher—still lower than more upmarket counterparts like Whole Foods) and no other supermarket I’ve seen is more dependent on the generic Wegmans brand, resulting in less brand-to-brand competition in a single product.  But these are mere cavils in a chain that has aspirations for greatness, coupled with a clear philosophy that it is only possible to retain greatness if the business expands slowly and smartly.

And, on that note, I’ll cut my analysis short, again to keep it from morphing into an outright promotional campaign.  Coming so close on the heels of my review for Jungle Jim’s, I hardly need to serve as a spokesperson for two supermarkets in less than a month.  Far better to focus on the smaller things, or, if that proves fruitless, the finer things in life.  Prime rib, anyone?

10 thoughts on “Wegmans: the grocer whose Valentine’s offering has got some real meat on it.”