In the urban jungle, a crosswalk for guineafowl.

As I manage issues regarding data migration from my old computer to new—apparently a process that, so far, has involved over four hours with tech support and no success—I must resign myself to another mini-post to keep things going when time is scarce.  On a bright May morning, I was trolling around downtown Trenton, New Jersey’s most attractive and intact historic neighborhood, Mill Hill, when I came across an unusual caution sign along the sidewalk. 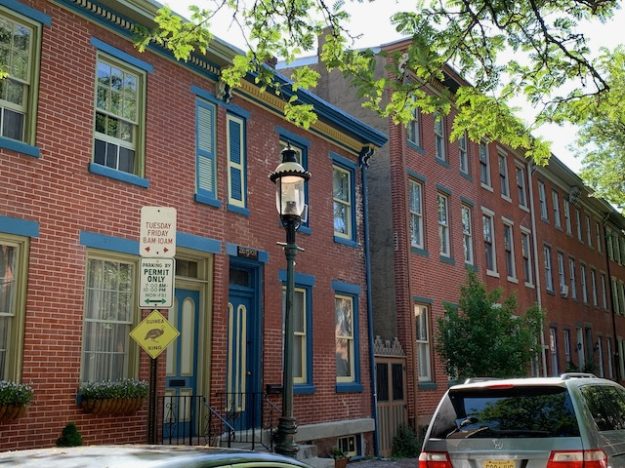 I had heard of guineafowl before but had no idea what they really were.  I knew so little, in fact, that I thought the word might be an archaism—a basically obsolete name for something that now used a newer, more familiar-sounding term.  Turns out I was wrong on that account.  For those who know as little as I do, guineafowl (or “guineas” or even “pet speckled hens”) belong to the Galliform order of ground-feeding, mostly nonmigratory birds, many of which humans have domesticated, including chicken, turkeys, quail, and peafowl.  Native to Africa, some species—particularly the helmeted guineafowl—are now prevalent as domesticated fowl throughout the world.  And, in case the sign in Trenton wasn’t attention-getting enough on its own, the warning it offered was about to deliver the goods. 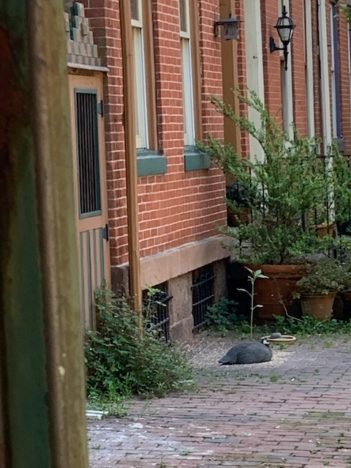 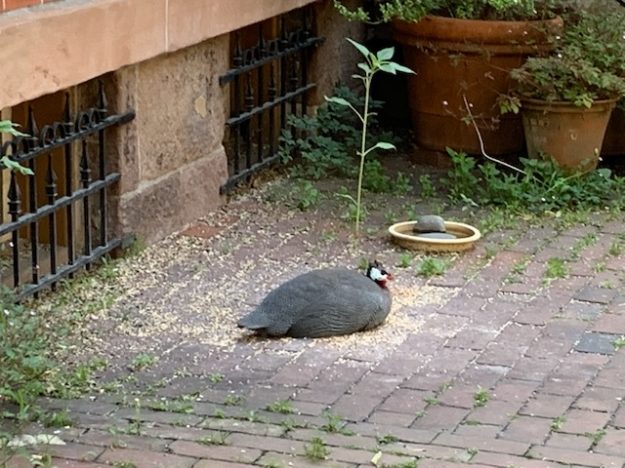 Its lack of fear suggested that this guineafowl in particular was indeed domesticated, and the sawdust path in which it sat indicated that the owners—presumably in the house just a few feet away—had made an outdoor home for it.  And a sign for it.  And, yes, eventually the guineafowl did cross. 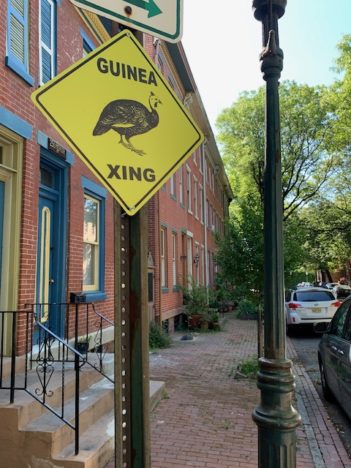 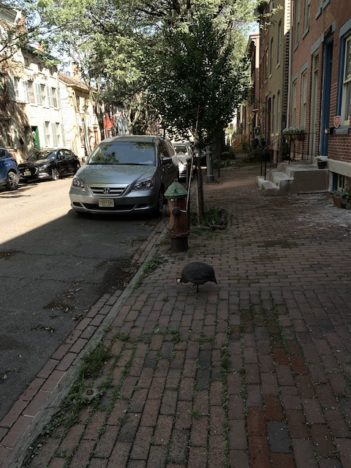 Seeing an uncommon bird kept as a pet in such an urban setting is unusual on its own terms.  Ever the wonk for details, I mostly just marveled at the positioning of the signs. 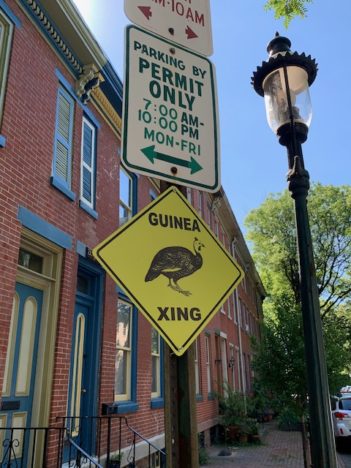 We see here some legitimate city regulations restricting parking, followed by one that uses that standard MUTCD shape and color for warning, often for pedestrian or animal crossing, but almost certainly not the product of the City of Trenton’s Department of Public Works.  Our guineafowl X-ing sign is probably the product of the bird’s proud owner, who cheekily wishes to announce the bird’s presence—made all the more ironic if the bird is languidly sitting there just a few feet away.

But can’t a municipality punish a person for forging an illegitimate sign on city property?  And I don’t just mean mounting to the city-owned sign post.  These zero-lot-line homes butt up against the sidewalk, so it is highly unlikely that this sidewalk serves as a de facto front yard, covered entirely by both a pedestrian easement and a separate, signage easement that allows the City to place signs on private property.  In urban settings like this where there is no actual turf grass, it’s uncommon that the City can absolve itself of responsibility for the sidewalk—a contrast from less densely populated area where homes may actually claim a small yard, in which case the sidewalk is typically a pedestrian easement that the City can force the homeowner to maintain (i.e., in shoveling snow in the winter).

We’ve all seen other privately-owned road signs that mimic one used in an official capacity.  Particularly common in rural areas are long driveways branching off a public right-of-way, which the homeowner has decided to turn into a pseudo-street sign that uses the household’s surname: Miller Drive or Anderson Lane.  Chances are the guineafowl household is violating municipal code with this sign, but, like those fake street signs that real only signify a private driveway, it’s not an offense worthy of enforcement, and a city with woes of Trenton has bigger fish to fry.  In other words, let the guinea cross.  No harm, no fowl.

PrevIsabella Apartments: it’s a scandal, it’s an outrage that they aren’t leasing quickly.
Wegmans: the grocer whose Valentine’s offering has got some real meat on it.Next

2 thoughts on “In the urban jungle, a crosswalk for guineafowl.”