Way out in Somewheresville, Pennsylvania, a glass partition separates this physical therapy office from the rest of the facility. 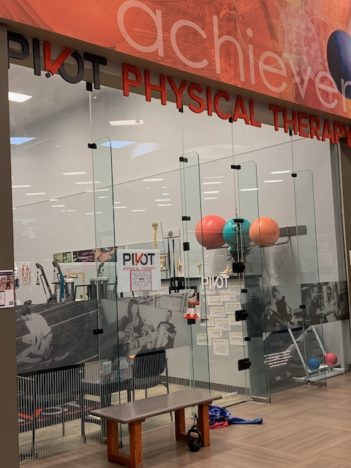 No big deal.  It’s not surprising that a physical therapy office would want potential customers to see what its typical activities look like: the therapists themselves, doing their job, using the latest in rehabilitative equipment.  But it still begs the question: what is that “rest of the facility”? 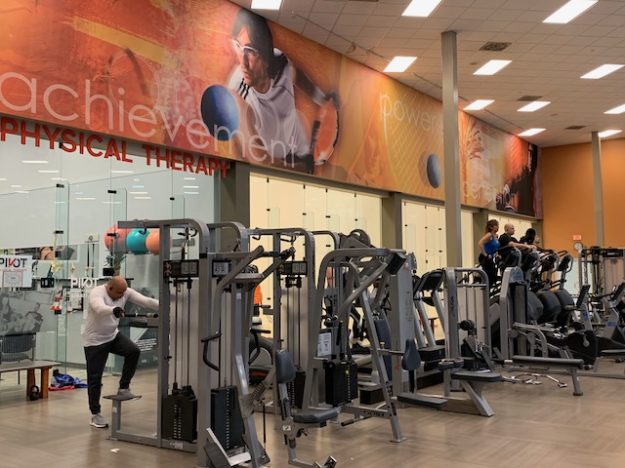 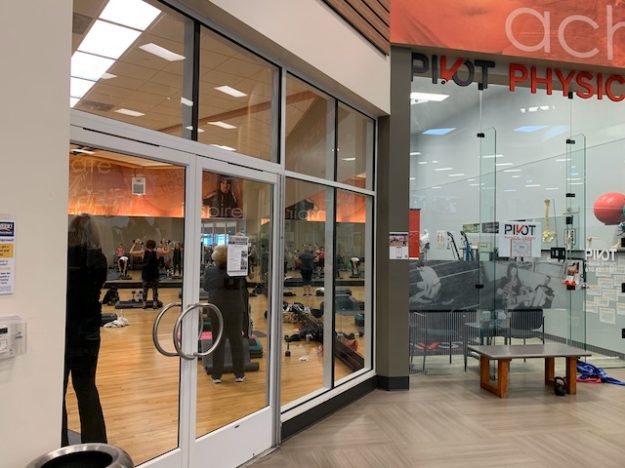 I’m going to leave the brand of the gym anonymous, but many here will probably recognize it, since it’s a chain of national prominence.  But that familiarity should allow people accustomed to gym interiors to fill in the missing pieces: Pivot Physical Therapy occupied the former site of an individualized training/aerobics room.  In this case, the business overtook what used to be a racquetball court.

We’re seeing a repeat of a situation I observed a few weeks ago at a coffee shop: the primary owner/tenant is partitioning small spaces within the premises and leasing them (or subleasing them, if the gym isn’t the primary owner of this freestanding structure—though I expect that it is).  Partnerships like this aren’t unusual, even within the gym/health club context featured here.  After all, it has become normal to find a juice and smoothie bar in a designated corner of a gym. 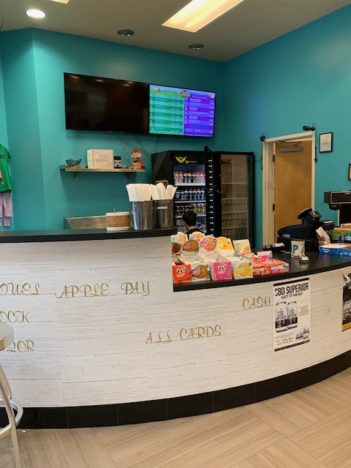 The gyms themselves do not manage or staff these juice bars; it is an outside company under contract.  How do I know?  No two locations of this national gym chain feature the same juice bar; in some cases, the gyms have changed contracts between various juice/smoothie providers, leaving the counter unstaffed and vacant during the intervening periods.  It’s an outside company whose offerings fits so aptly with a gym that it’s analogous to a hand in a glove.  Why should a mom-and-pop smoothie shop lease space in the strip mall 500 feet away from the gym when it can position itself right next to its client base?

It could very well be that gyms and physical therapy offer a similar harmony.  Why wouldn’t they?  Financially, the gym just stroke a home run.  The only way that the gym might have something to lose would be if racquetball were so popular that there were queues outside the courts.  Racquetball is not that popular, and as a result the gym has found away to monetize some otherwise underutilized space.  (Three racquetball courts remain available for gym members.)

I’m less confident that it’s a win for the physical therapy office.  Here’s the sign at the vestibule, just to the left of the entry door: 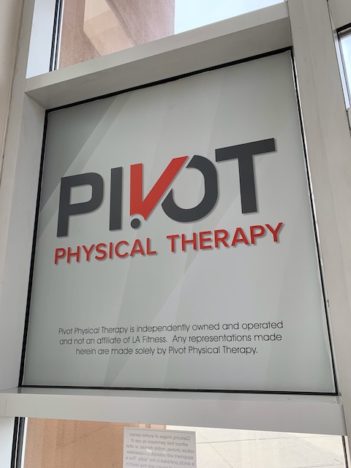 It’s reasonably big, though nowhere near as grand as if Pivot Physical Therapy had a leased space at a strip mall.  It’s not likely that these therapists are going to attract much business from people simply passing by in a vehicle; all the motorists are likely to see is the sign for the gym itself.  But maybe physical therapists don’t usually get impromptu clientele; a location where 100% of the gym regulars are aware of its existence may prove more lucrative.  The typical operative hours of a gym are long and generous enough that it shouldn’t curtail the physical therapists.

But can Pivot Physical Therapy attract other prospective clients—those who learn about it online or from a referral?  Will they be turned off by having to traipse through a gym where they aren’t members?  Will they have to explain their reason for entry to the gyms’s front desk?  I have a sneaking suspicion that nearly 100% of the smoothie bar patrons are also gym members, but clearly the smoothie bar benefits enough from the captive gym audience to run a profit.  A specialized, skilled service like physical therapy is more likely to attract customers completely unaffiliated with the gym—many of them doctor referrals—but perhaps not enough that a physical therapy office needs its own discrete facility.  Therefore, having a fitness-minded contingent as the primary foot traffic lurking immediately outside the Pivot front door only helps the business for the PT specialists inside.  And they probably lease from the gym at a lower rate than a strip mall, a medical specialty campus, or a facility where they were the primary or exclusive tenant.

In short, the odds are strong that this is a win for both parties, as it should be in any landlord-tenant relationship.  Gyms routinely have little rooms with highly specialized functions, sometimes remaining completely unoccupied through most of a gym’s long operating hours.  Though I haven’t seen this partnership before, I suspect it won’t be long before I see it again. It reinforces the notion of fusing loosely related services under a single roof, engendering a symbiosis through density of activity.   And for those who throw out their back on the rowing machines, they might very well find the treatment they need is just a 30-second walk away.  No appointments necessary.

3 thoughts on “First spinning, then smoothies, then sports medicine: fusing physical therapy with the fitness center.”