For those who don’t go to malls regularly—which, in 2020, it’s safe to assume is most of us—we’ve probably stopped thinking all that much about the act of shopping altogether.  By and large, it’s no longer a peripatetic activity.  But there was a certain mystique toward the idea of walking confidently down a street—or, more likely, a climate-controlled hallway—carrying an elegant paper bag by the wax-reinforced handles, or maybe an sturdy, decorated cardboard box bulging with the stabilizing tissue paper inside.  Even better if the anonymous shopper is carrying several of such bags/boxes, and if he or (optimally) she is boasting fashionable accoutrements, ornately styled hair, coruscating jewelry, and—unless the preferred look is “stern”—a breathtaking smile exposing those alabaster teeth.  (And if they aren’t shopping, they’re dining.)  It’s an image that Simon Property Group, historically the nation’s largest mall owner/operator and the world’s largest Real Estate Investment Trust (REIT), has catapulted to ubiquity.  But it was already the status quo for endowing the act of shopping—ideally, shopping at a mall—with the requisite level of elegance.

And, as was obvious to anyone who clicked on my link to the Simon website, it’s still the defining image of Simon and its competitors (Taubman Centers Inc., Macerich, the now-defunct General Growth Properties).  But, with each passing year/month/week, Simon and its semblables get less mileage out of the visual trope of the elegant shopper.  It’s starting to seem passé—corny, even.  I mean, just take a look at the website to a mall owned/operated by a second-tier company (not Simon-sized) and you can almost smell the stale air wafting from the computer screen.  And the mall I chose to link in the previous sentence—Marley Station from Glen Burnie, Maryland—is “threatened” but not yet dying; it still probably has at least five more decent years of life in it.  Compare that to the website of a truly dying mall, and you can see just how superfluous these leviathans of commerce have become to the average American with a smart phone and a credit card.

But I digress: this post isn’t really about malls.  I’ve done that enough recently already, and plenty more are forthcoming.  The mall-centric introduction is still germane, though, because the paradigm that mall advertising helped to generate has defined the public’s perception of elegance and sophistication, even though the anti-establishment voice has long ridiculed malls for their redundancy, sterility, and contrived replacement of historic downtown retail.  Today, however, the iconography of elegance has largely migrated to a different milieu: the urban apartment building. 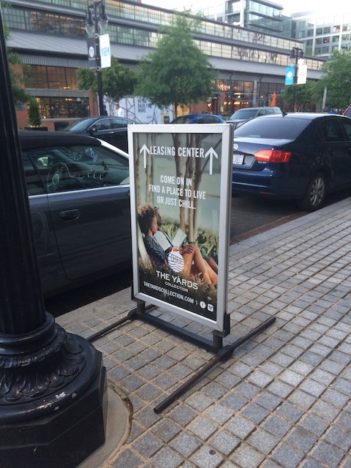 It’s a topic I’ve covered routinely, focusing largely on aesthetics, site selection, or principles of urban design.  This time, however, I’m going to offer little more than the imagery that lines the first-floor windows of a “newish” apartment complex in the Navy Yard neighborhood of Washington DC, a formerly derelict and disinvested site that began to sprout apartments and office buildings in the late 2000s, thanks in large part to the one-two punch of a relocated headquarters to the Department of Transportation (work) and the new ballpark for the MLB Washington Nationals (play). 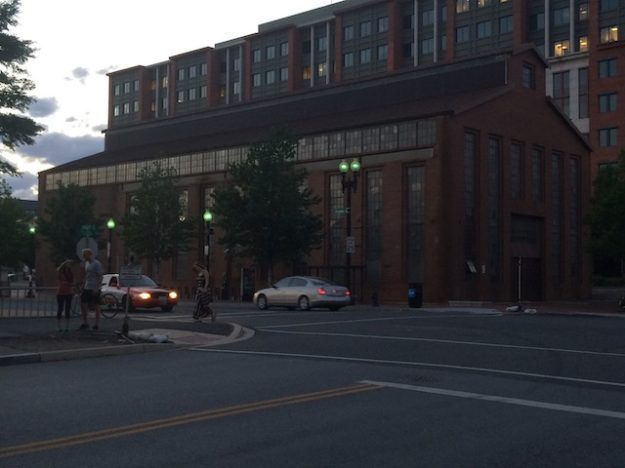 In the above photo, the massive Michael Graves-designed Department of Transportation Headquarters looms in the background; an as-yet mothballed old industrial Navy Yard building stands in front of it.  Amidst the countless remaining underutilized parcels—largely consisting of impound lots, junk yards, underutilized old industrial buildings often repurposed into nightclubs—splashy new apartment complexes begun to sprout, the majority of them under the umbrella brand of “The Yards”, largely developed and managed by a single company, Forest City Realty Trust, Inc. 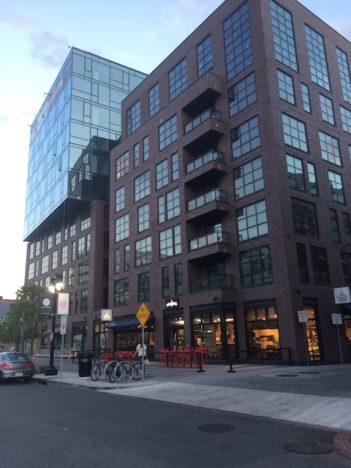 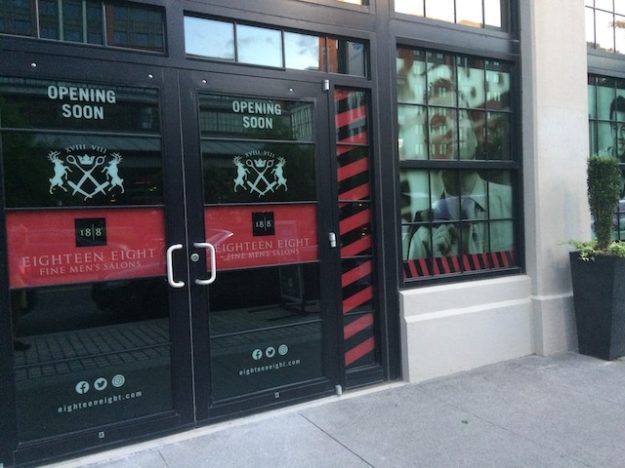 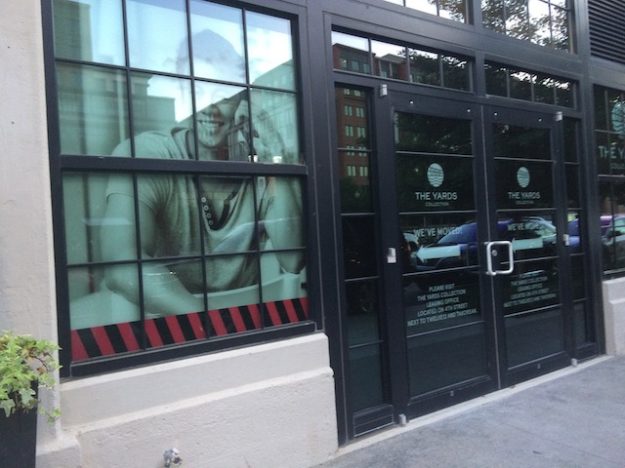 I say “newish” because I’d estimate the twelve-story building featured in many of these photos is about three years old, and these pics date from two-and-a-half years ago.  At that time, very few tenants had yet leased the retail space on the first floor.  So what do we see filling those vacant storefronts?  The usual: promotional campaigns for available residential units within the apartment building itself.  And that’s where we see a photographic panoply akin to those images of beautiful stylish people toting expensive shopping bags. 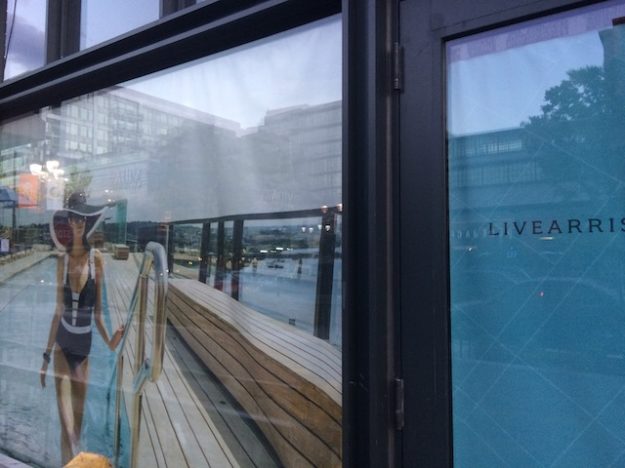 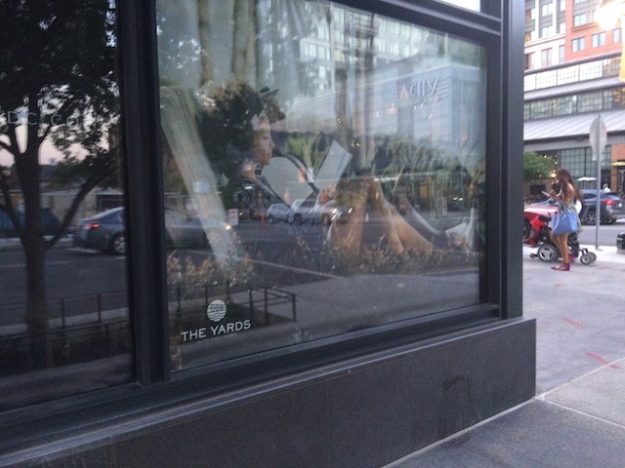 I’m not going to pretend that the photos turned out well; in hindsight, I obviously should have chosen an overcast day, or at least a point in time when the sun is at its peak.  I never pretend to be anything more than an amateur.

But it doesn’t really matter: even amidst the glare and distracting reflections, the essence shines through: 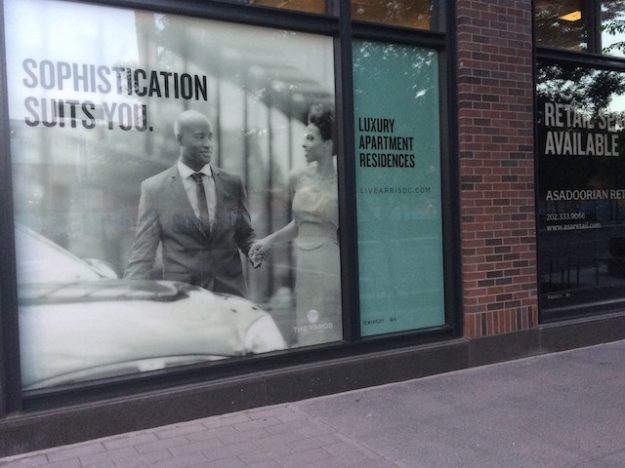 “Sophistication” is precisely what these images are striving to convey.  Which is a critical driving force to the rediscovery of the appeal to urban living.  So these images show us the activities/products that Forest City’s marketing team wants us to think are typical of city people.  In other words, yoga. 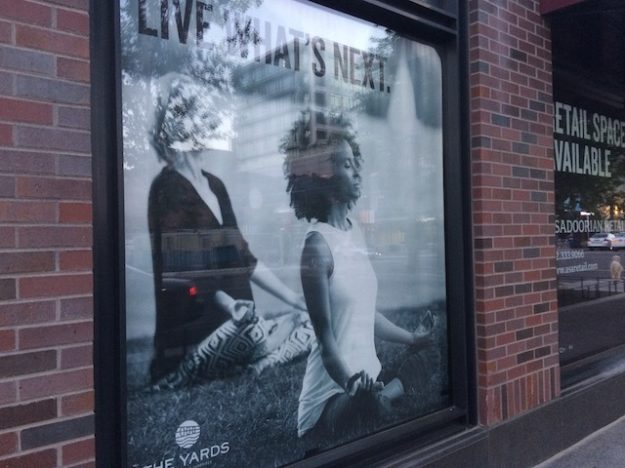 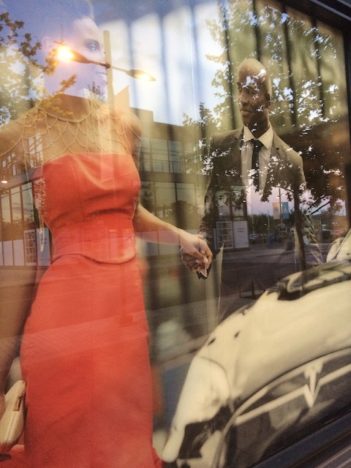 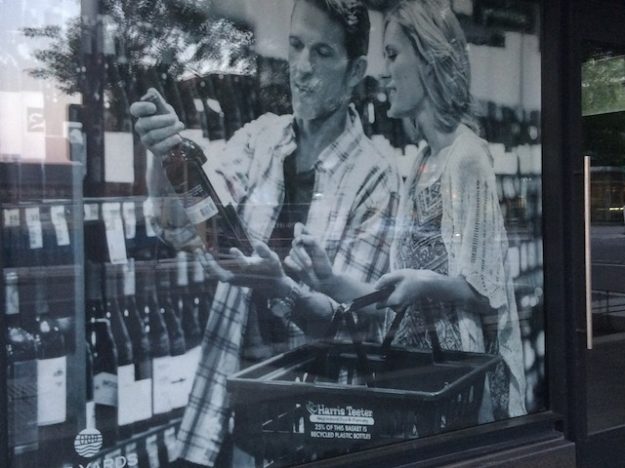 I can think of only two reasons the shopping basket references the more middle-income-oriented grocer Harris Teeter and not the more stereotypical Whole Foods: a Harris Teeter was a block away, and the Whole Foods serving Navy Yard apartments hadn’t opened yet.  In the absence of an upmarket grocery store, the photo at least reinforces—as they all do—that these people have considerable disposable income.  Sure, not all wine is expensive.  But it’s certainly a non-essential drink associated with leisure, not quenching thirst, and leisure in itself—though broadly available to almost all strata in a way that would have been inconceivable a century ago to all but the super-wealthy—remains an endeavor we associate with disposable income.

As much as these apartment buildings depend on a high-earning professional class to absorb the units, the photos sure don’t want us to believe these people need to devote much time to work. 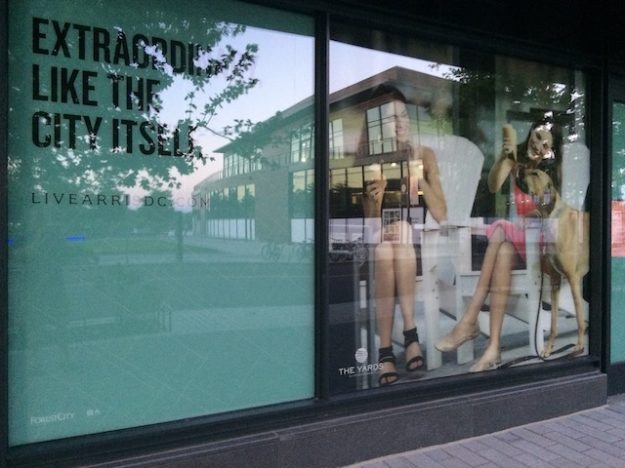 In Navy Yard apartments, they mostly sit around and feed ice cream to dogs.  And yes, dogs are an essential aspect of 21st century urban apartment living. 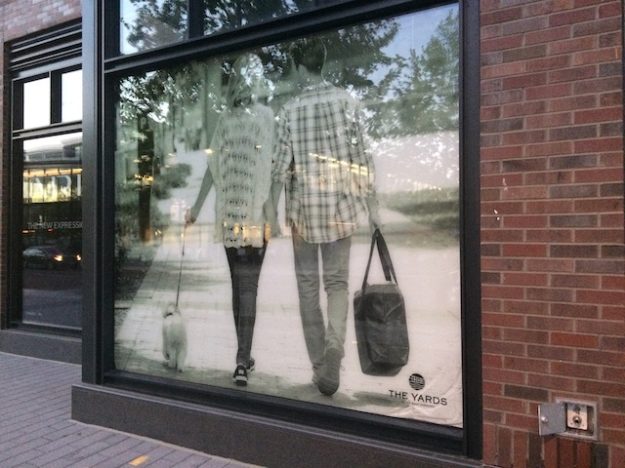 It’s highly advisable that the dogs are full-breed; even better if they’re French bulldogs, as the one in the photo above very well might be.  At least it’s the right size.  French bulldogs, which, due to their intrinsic physiology, have such narrow hips that the male cannot mount the female and the female cannot give birth vaginally, depend entirely on both insemination and caesarean section, making them among the most expensive mainstream breeds.  But that’s probably a less critical detail than the one that hints at the likely ephemerality of young professionals gravitating toward large, expensive urban apartments. 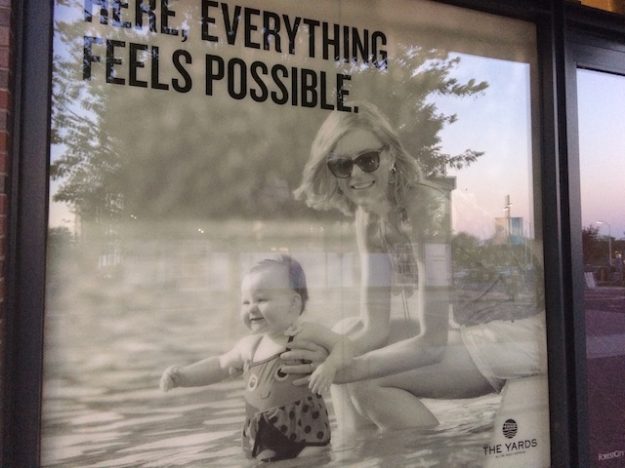 Children are a conspicuously rare sight.  And if we do see them, they’re nearly always under five years old. 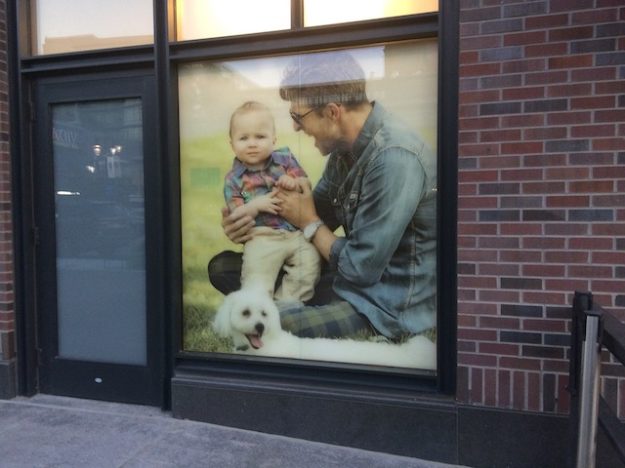 Few cities—Washington DC among them—have reconciled the mystique of urban living with its incompatibility with child-rearing, certainly once the kids reach school age.  In fact, DC ranks among the most childless big cities in the country.  In a neighborhood where a one-bedroom apartment typically costs $2,300 a month and public schools are, for the most part, terrible, the generally decent public safety conditions at Navy Yard in 2020 simply cannot compensate for the cost.  So instead, we receive an abundance of imagery suggesting that Navy Yard apartments are big singles club.  Or a swingers club. 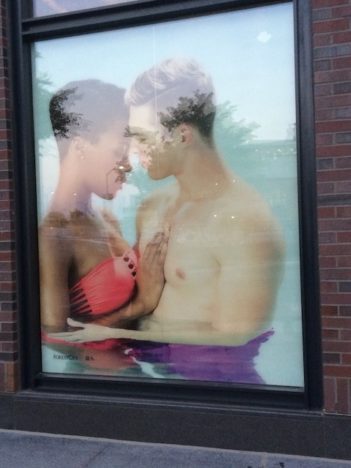 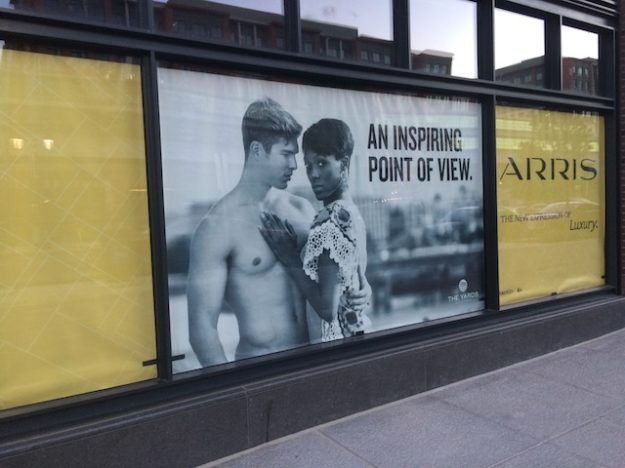 Make no mistake: if you move here, you’re going to have tons of high-powered sex.  The vaguely soft-core nature to some of these photos clearly intends to provoke just as much as entice.  And if these images aren’t conjuring a lifestyle defined by consumption and hedonism, they’re not working.  But they are.  Navy Yard apartments keep leasing, propelling demand for the construction of new ones. 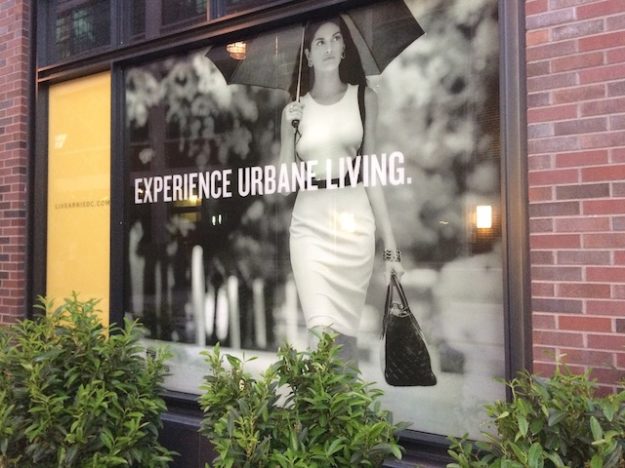 After all, the woman in the above photo seems carbon copied from one of Simon’s shopping succubi: the quintessence of affluent urbanism.

I’ve all but given up in trying to hide my snark in this exploration of the promotional photography for a single “luxury” unit among these Navy Yard apartments (air quotes for the word because these days basically all new apartments brand themselves as luxurious).  My cynicism isn’t just toward the vapid consumption that these images proudly flout.  I’m cynical about the anticipated life span of urban apartments is a lifestyle.  The fact that these ad campaigns—not just for this building but the others as well—feature more French bulldogs than school-age children reveals how, although the target demographic appears abundant (and in a white-collar magnet like metro Washington, it is abundant indeed), it is also both restrictive and non-perpetuating.  The ad campaign reinforces a sort of solipsism to urban living, which, while hardly new; after all, the archetype of the self-absorbed “fop” or “urban dandy” was just as ripe of a source for lampooning as the “metrosexual” has been the last decade or so; the words are all basically synonymous.  But never before has it captured such a sizable portion of the population: elitist urban dandies of the past could at least justify their elitism, in time periods when less than half the population was literate.  They were exclusive because they were uncommon. 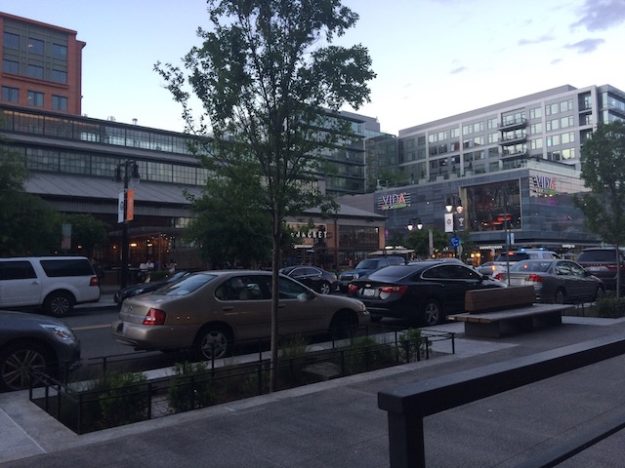 Today, both inside and outside of the Navy Yard apartments neighborhood (The Yards), the air of elitism pervades, even though the demographic subgroup is hardly recherché.  Highly educated professionals are everywhere.  But this yuppie clique shows little interest in perpetuating itself, and if these Tesla-driving, French bulldog owning yoga aficionados continue to spurn coupling during their childbearing years, will they continue to seek apartment living—essentially an extension of the college dormitory culture—well into middle age?  And if they don’t, will there be enough of a youthful cohort to fill all these units, if nobody’s having kids?

This uncertainty across multiple sociological considerations leaves me less than sanguine about the long-term viability of the city-as-bourgeois-playground ethos, whether here at these Navy Yard apartments or in other cities.  Malls at least had a good half century before they became obsolete.  How long do we expect an urban work/play district to survive?  I can think of no better manifestation of this demographic’s insularity than the following sandwich board display, just a block away from the apartments captured in the previous photos. 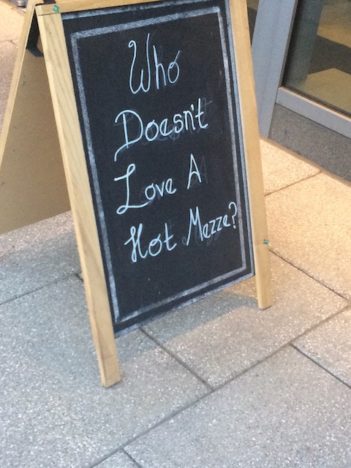 PrevWegmans: the grocer whose Valentine’s offering has got some real meat on it.
First spinning, then smoothies, then sports medicine: fusing physical therapy with the fitness center.Next