When most Americans hear the phrase “holiday season” they tend to think of the end of the year—generally the time frame from Thanksgiving to Christmas (or Hanukkah), then to New Year’s Day  But our appetite for celebratory gestures—and the marketplace’s zeal to respond to it through commodification—has essentially expanded the holiday season to Halloween, given people’s propensity for decorating; these days it seems like Halloween generates as many decorations as Christmas.  (Possibly more, given that adult non-Christians have expanded the celebration of Halloween far beyond its apocryphally Christian and juvenile origins.  And the aspects of Christmas that are the easiest to commodify—the decorations and presents under a fir tree—are equally apocryphal.)  And, since the holidays clearly extend to the celebration of the new year, why not stretch it a bit further and throw Martin Luther King Day into the mix?  It’s a holiday for a sizable number of people, and it represents the last heave-ho of doing something atypical before we get into a more predictable grind of the Monday-to-Friday work week.

But do we even have much of a typical weekly grind?  Hardly more than a week or two passes before we essentially stumble into another holiday season, and the typical chain supermarket seems more than happy to accommodate.  Heck, they accommodate the peak of football season too—which is practically a holiday when Super Bowl approaches.  Take a look at what a typical grocery store offers in northern Virginia (Washington DC suburbs) by late January. 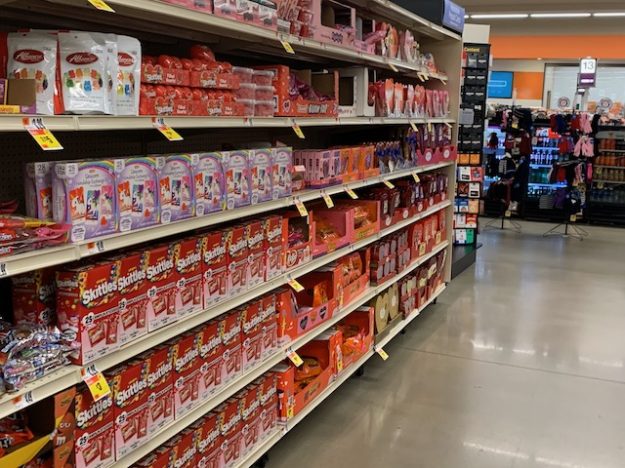 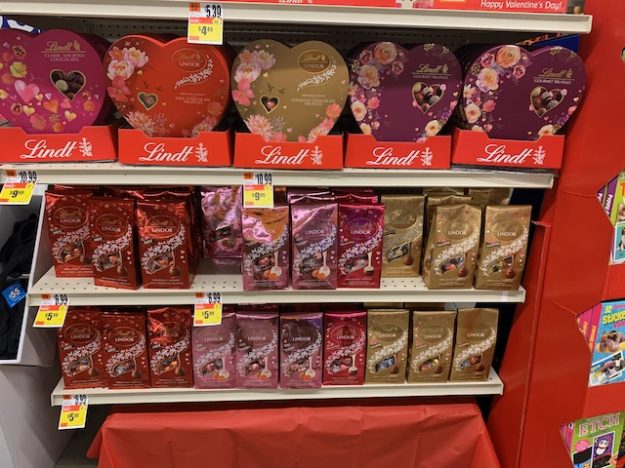 The shelves are starting to assume the tenor and appearance of Valentine’s Day, which should come as no surprise, since it’s a candy section, and I’d wager that Valentine’s Day competes with Easter for the second place in the sale of various sweets, with Halloween an obvious first place.  (Incidentally, Halloween rates only fourth among holidays in the sales of chocolates, trailing Easter, Christmas, and Valentine’s Day.  I guess Halloween encourages more confectionary diversity.)

But there’s more to the late-winter holiday season than just sugar, and even if a grocery store’s prerogative is edibles, they also can ratchet up huge sales in seasonal greeting cards and decorations, the latter of which leave a strong visual impression. 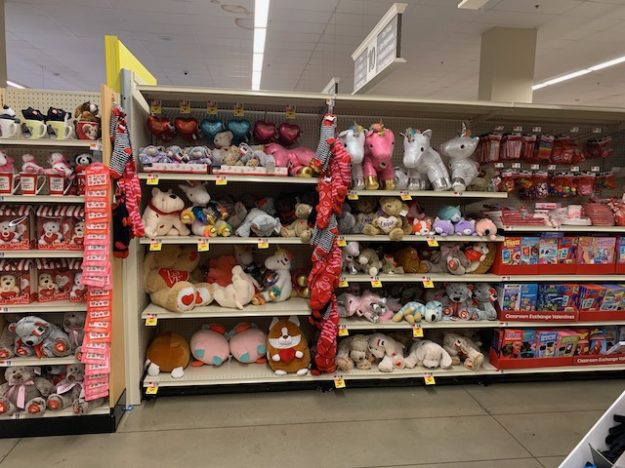 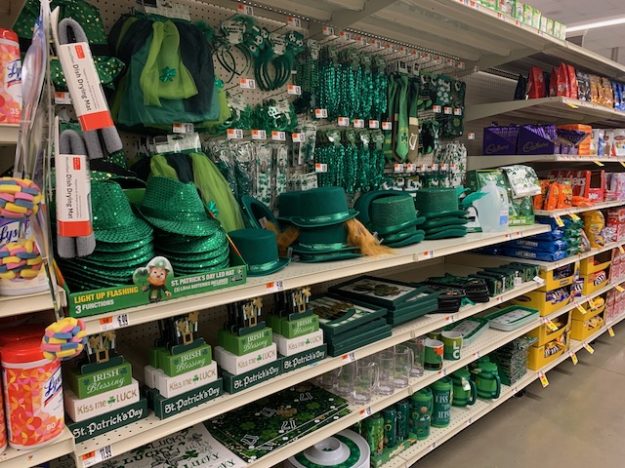 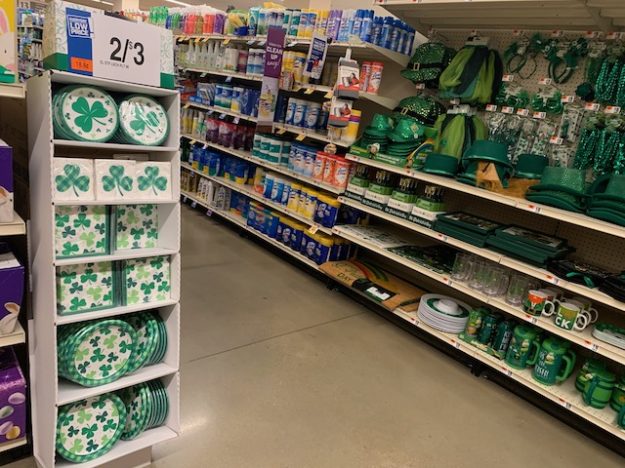 A wall of red/pink for Valentine’s Day; a wall of green for St. Patrick’s Day.  These two holidays, occurring on a fixed date each year, have almost helped create a color-heavy visual language for their respective months, much the same way orange and black do for October, and red and green do for Christmas.  But it’s unreasonable to neglect the major Christian holiday with a widely variable date: Easter, with a much subtler display. 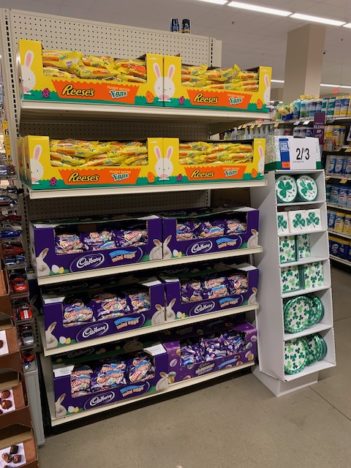 By the time of this post. the Valentine’s displays are all but gone, with St. Patrick’s and Easter in close competition.  And although, by most metrics, Easter is a more culturally significant/important holiday (to which most Irish-Americans would grudgingly concede), Easter simply does not have the same semiotic gravitas.  At best, the color scheme for Easter involves pastels, but that offers as big of an array of hues as there are in a typical bag of jelly beans.  And pastels use softer tones by definition.  The Easter industry is huge; it’s just not a visually distinct, either as decorations in people’s homes or the grocery store’s display.

Once Easter ends, we do reach a genuine lull in the commonly perceived holiday season, at least until the point in time when the commodification of Cinco de Mayo asserts itself as effectively as St. Patrick’s day has.  But Easter’s fluctuating date does evoke an important consideration: it is merely the most prominent holiday in the Christian liturgical calendar, but the Council of Nicea set the date for the Lenten season, beginning with Ash Wednesday and terminating with Palm Sunday and Good Friday.  And, as many Christians (especially Catholics) are aware, the time period sandwiched between the liturgical seasons of Christmas and Lent is Epiphany, a multi-week period of festivities and indulgences that culminates in Shrove Tuesday/Fat Tuesday, or Mardi Gras.  Considering that St. Patrick’s and (especially) Valentine’s coincide with Epiphany and carnival, one holiday season dovetails another.  Kind of puts Advent (Thanksgiving to Christmas) to shame!

In the US, the Carnival season, concurrent with Epiphany and culminating with Mardi Gras, enjoys widespread cultural cachet in the more warm-weather, heavily Catholic cities; St. Louis, Mobile, Galveston, Baton Rouge, and of course New Orleans all have genuine, raucous Mardi Gras festivals.  As for grocery stores, I suspect it’s getting increasingly easy to find the signature king cake—bedecked in Mardi Gras colors of purple, green and gold—in the bakery section throughout the country, though in much smaller quantities and during a shorter period of time than in the aforementioned cities.  And, if the grocery store in question is in a melting-pot city like Alexandria, Virginia or Silver Spring, Maryland (the source of these photos), right next to the bakery’s king cakes is a potential display of paczki, the dense, filled doughnuts widely available across the country’s “Polish belt”—the conurbation stretching roughly from Chicago/Milwaukee across various Great Lakes cities: Grand Rapids, South Bend, Detroit, Toledo, Cleveland…all the way to Buffalo, which celebrates a Packzi Day on the Thursday before the start of Lent (Fat Tuesday).  In the Pennsylvania Dutch influenced enclaves of the country, the stores bring out fasnachts during the days preceding Fat Tuesday. In central Maryland, the bakeries whip up batches of kinklings.  Or, if the supermarket is particularly culturally astute, we’ll find all of the above: just as we expect to see Valentine’s, St. Patrick’s, and Easter all at once.

Outright parades and street parties during Carnival are comparatively uncommon in cold-weather climates, but the grocery stores can still find ways to capitalize on sweet, caloric treats.  And, once, the Lenten season has begun (as it has by the date of this article), we await another celebratory pastry greeting us at the supermarket’s entrance: 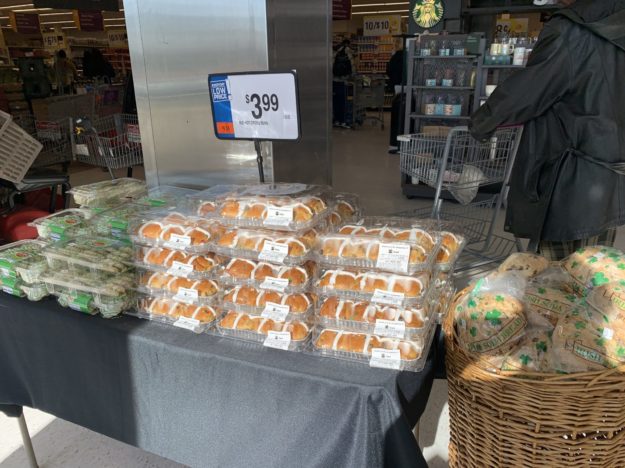 There in the middle (sandwiched by St. Patrick’s Day cookies and Irish soda bread) are stacks of hot cross buns, the dairy-free pasty popular throughout Lent.  So even this 40-day season of privation and austerity offers cause for indulgence.

Now we only need a seasonal display for February 29th.  Perhaps some frog-shaped danishes to account for Leap Day—at a price of $20 a piece?  It’s a once-every-four-year occasion: a perfect chance for the illusion of scarcity…and the inevitable mark-ups.