As I prep for a much longer, photo-heavy blog article, I offer this brief filler, with a new take on some familiar material: a declining, heavily vacant strip mall in a suburban area, this time in metro DC (the Maryland side). 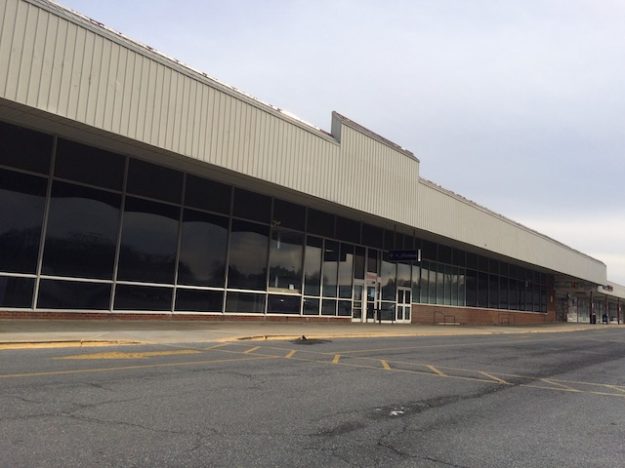 We’ve all been here before: these days, blighted strip malls are just as common in small towns as they are in suburbia.  And it doesn’t have to be a suburban district that’s declining socioeconomically; sometimes the strip mall is just old, outdated, and a more attractive alternative a mile away is Dysoning up all those tenants.

This one clearly isn’t commanding great leasing rates.  As seen in the photo below, at least one of the anchor tenants is a church, and it looks like one of the tiny in-line tenants just to the left is as well.  Storefront churches are rarely an indicator of high-value real estate. 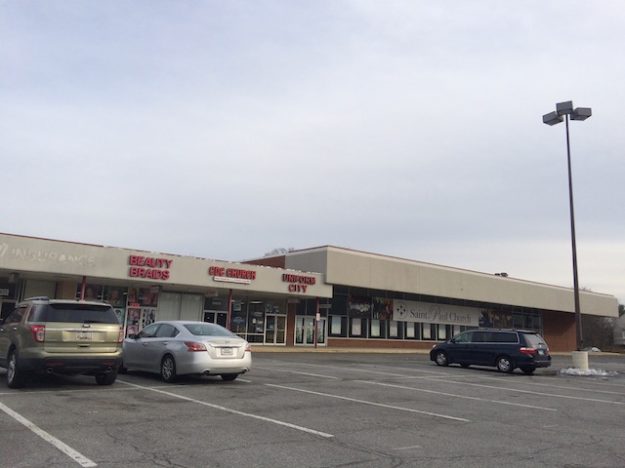 But what gets me—and this is a common visual throughout economically depressed areas—is the consistency to the signage. 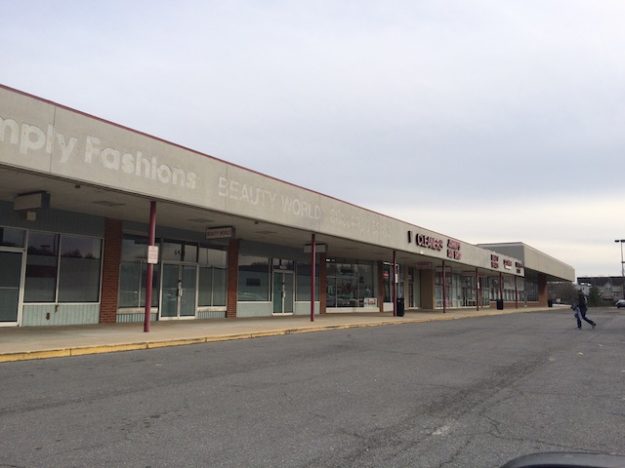 It’s a landscape of red-letter labels.  And this is a consistent theme: for whatever reason, in lower-income commercial settings, the tenants disproportionately use blocky all-caps red-letter signs.  The font might even be slightly different among the various tenants, but it’s red all the same.

Is there a reason for this?  Is red—a hot, often visually prominent color against a drab brown-gray building façade—the default hue, the color most commonly pressed at the manufacturer’s, for tube, backlit, or internally lit commercial lettering, and, since it’s already widely available, it’s also the cheapest?  Why is this such a stereotype?

Perhaps I’m demonstrating my own bias by simply assuming it’s cheap to use red-letter storefront signage, but it definitely contributes to a sort of commercial vernacular, and the connotations are rarely positive.  If one drives through a suburban area where the strip malls are replete with red-letter tenant names, the immediate assumption is it’s at least somewhat blighted.  Though prominent and the color of love, red also implies anger, danger, and—perhaps worst of all—financial loss.  Besides, color is a critical strategy for developing a brand, so if a business owner uses nothing but red-letter caps above the store’s entrance, he or she is impeding an opportunity to make a logo out of the business name.

Yes, it has to be a cost-cutting measure.  Commercial signs are deceptively expensive, especially when they’re customized—and these clearly aren’t—yet they’re also essential for a bricks-and-mortar establishment that owes its commerce to remaining easily identifiable. But there’s an ironic undercurrent to the red-letter approach: it creates a visual consistency that many zoning ordinances fail to achieve, and the ones that strive for this the hardest are often municipalities with the highest income.  Think of the mandated wooden signs in that charming three-block main street of that fashionable streetcar suburb.  It takes regulation for them to get the look this Maryland strip mall is achieving through its few remaining businesses.  Of course, the posh towns don’t zone for red; in fact, they just as well might mandate that that their signs be anything but the color of bankruptcy.

PrevElevating our transportation options: the Personal Rapid Transit of Morgantown.
Forest Fair Village (MONTAGE): a 98% defunct mall, frozen in 1991, that remains a feast for the eyes. (If they keep the lights on.)Next