Elevating our transportation options: the Personal Rapid Transit of Morgantown.

In the affable college town of Morgantown, West Virginia—home of the WVU Mountaineers—the unsuspecting visitor encounters a very strange viaduct-like structure presiding over some of the most prominent downtown streets. 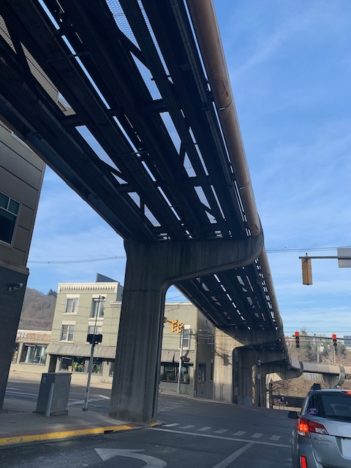 What is it?  It’s certainly not on the same scale as the Chicago Transit Authority’s rail system—the “el” (short for “elevated rail), but then, does anyone expect Morgantown, with just 30,000 people, to warrant a network of that size?  It looks a bit more like the more obscure but hardly unknown, and largely infamous, People Mover in Detroit, which forms a three-mile ring around the Motor City’s downtown area, though it’s not as wide as this Morgantown incarnation, since it only offers service in a single direction (one of the People Mover’s most fatal of flaws).  One could also compare its appearance to the point-to-point service of the privately funded, now-defunct Clarion People Mover, a dual-track operation in Indianapolis that navigated hospital employees, students, and patients across the medical campus throughout its 15-year life cycle.  The Indianapolis example closed at the end of 2018 when the hospitals determined the maintenance costs exceeded the benefit; they resumed shuttle service in 2019.

But this Morgantown variant is not a People Mover.  It’s essentially the world’s only surviving example of Personal Rapid Transit (PRT), operating since 1975 as a mostly grade-separated means of reaching various destinations, based on individual preference—a system that the federal government partnered with the State and City to pilot, capitalizing on Morgantown’s rugged topography, its sprawling West Virginia University Campus, and the high proportion of non-vehicle-owning students.  With five stations and a 3.5-mile route that is mostly overhead (about one-third is underground or at surface level), the Personal Rapid Transit uniquely allows the user to specify the destination, and the vehicles will bypass stations to get there.  There’s the distinction between it and most other forms of mass transit: in some regards it operates more like a taxi service on a concrete, magnetically induced track/guideway.

I don’t think it’s fair for me to write much more extensively about Personal Rapid Transit, since I have yet to try the Morgantown example.  (One of these days.)  But it’s remarkable because it’s the only example in the United States, it has survived with reasonably good use for over forty years, even amidst some upgrades in the early 2010 to improve reliability, which has always remained above 90% and usually above 95%.  In the last decade, other replications of PRT have appeared, mostly in Asia, but it remains a novelty. 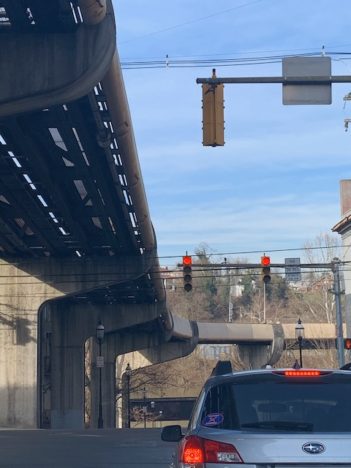 And I suspect that, at least in my lifetime, it will never expand beyond the novelty status.  Color me cynical, but the very presence of this infrastructure in Morgantown underlies the paradoxical nature of Personal Rapid Transit’s intent: it aims to move large numbers of people collectively, but the notion that one can specify where one would like to go erodes the possibility of collective success.  Supposedly the PRT cars in Morgantown can hold up to 20 people comfortably.  How do the 20 individuals decide who gets preference, if they all don’t seek to end up at the same station?  Wouldn’t there have to be some level of bargaining, and the optimal solution would result so that the outvoted sheep simply leave the car and choose to embark on the next one that arrives?  Since I’m speaking out of ignorance, I’m certainly open the discussion to those who understand better or have used it regularly.  Perhaps more importantly, as long as trains require some sort of track (which, one presumes, underlies the very definition of a train), the idea of personalization on par with a taxi or ride-sharing app isn’t feasible unless overhead concrete were to become as prevalent in a city landscape as streets and sidewalks.  Such an approach is probably politically unacceptable from both a budgetary and aesthetic standpoint.

From what I can tell, however, Personal Rapid Transit works in environments where there’s a homogenized need spread over a reasonably large but contained distance.  Morgantown has a somewhat fragmented college campus that dominates the local economy.  Students and faculty use it all the time.  Airports also seem like a good option; London Heathrow features a variant that has run for about a decade.  Beyond that, until we achieve some mode of transit akin to Back to the Future Part II (the old flying cars analogy), I’m not sure I see a scenario where PRT will elevate beyond novelty status.  And if we ever do get flying cars, unencumbered by any track or infrastructure, what’s to keep it as a mass transit operation, when, if it works well, eventually people will dig deep into their pockets to buy their own vehicles, as they did in the movie?  Let’s hope, at the very least, the Morgantown PRT continues to whet people’s appetite for what we could achieve, for many years to come.

PrevThe construction year: is it a building’s badge of honor, a brand, or both?
In small biz, do red-letter signs yield red-letter days?Next

11 thoughts on “Elevating our transportation options: the Personal Rapid Transit of Morgantown.”