The construction year: is it a building’s badge of honor, a brand, or both?

Although a freestanding municipality, the City of Harrison in far southwest Ohio also functions fully within the orbit of metropolitan Cincinnati.  And although the two-block commercial main street appears small for a city of 11,000 and growing, it owes this lack of proportion to the surge of population after 1960, prior to which Harrison lingered at around 1,600 inhabitants for many decades.  Though an old community, first platted at the beginning of the 19th century, the majority of Harrison’s development has taken place in the automobile-friendly decades after World War II.  So approximately 85% of Harrison’s land area (of 5 square miles) has a character more in keeping with suburbia.  It’s a small old town and a bigger new one.

Despite the outward growth, Harrison boasts that two-block commercial core.  And, from the looks of things (at least on the south side of Harrison Avenue), it’s pretty impeccable. 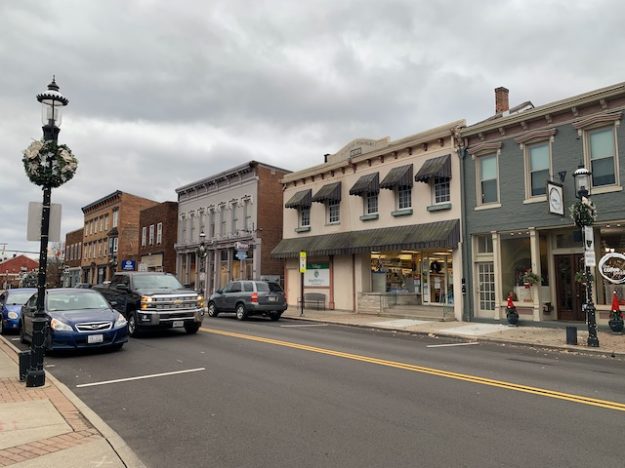 The other side of the street—the side from which I took the photo—is less impressive.  Here’s a Google Street View of the north side of the street, suggesting that a sizable number of old commercial buildings got demolished to make way for a big parking lot, which was a common fate to befall most small-town main streets during the nadir of the 1970s and 80s.  That said, the average visitor isn’t going to intuit the history of that bland parking lot and will instead marvel at the eye-catching colors of the ornate façades.  But there’s an interesting theme among these structures that reveals some of Harrison’s more recent revitalization history.  Take a look at this one: 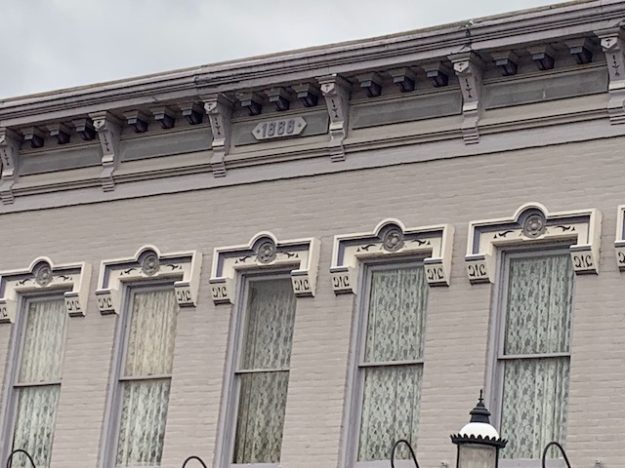 There at the cornice is the construction year: 1888.  While this placement is hardly uncommon, the layperson typically expects to see the building’s construction year on or near a cornerstone, just as the average person is likely to correctly identify a “cornerstone” on a building (a more straightforward term), rather than the slightly more esoteric architectural term “cornice”.

But there it is.  And other buildings on Harrison’s main street seem to adhere to the cornice dating strategy as well.  Here’s a building that has either retained its use for 150 years or at least currently claims a tenant that evokes the building’s original purpose: as the village pharmacy. 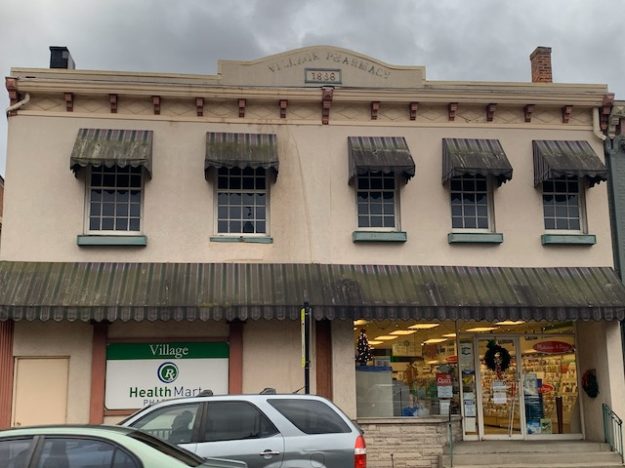 And, just down the street, another structure with a critical year at a similar location, but not really at the cornice, because the building lacks a conventional one. 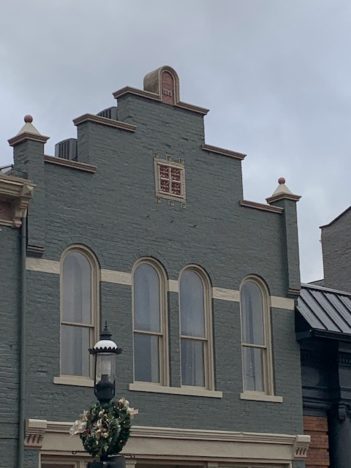 Instead, it has the distinctive stair-step gable shape called trapgevel, a feature most commonly associated with Dutch cities like Amsterdam (where it is the status quo), but occasionally encountered in scattershot Dutch settlements in Indiana and Michigan, as well as a particularly striking edifice in Lewes, Delaware. But poised right at the pinnacle is the construction year.

This cornice placement is typical of buildings in commercial main streets—particularly those in the eastern states—that could not easily affix the year of construction on a cornerstone, because, in many cases, little to no space separates two abutting buildings.  Here in Harrison, only the façade is often visible, and since cornerstones tend to envelope both sides at a building’s corner, the inclusion of the date doesn’t work as well aesthetically.  Placing it on the cornice (or the apex of the gable) also preserves symmetry.  If I were to pivot my camera’s view just a bit to the right from this Harrison Avenue street wall, we encounter a corner, where the double exposure of the buildings affords more opportunities for a different placement of the construction year. 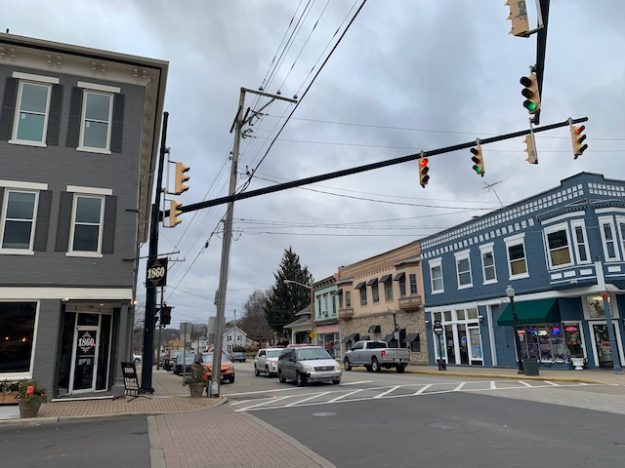 In fact, I’m going to go out on a limb and speculate that the “1860” featured on the building to the left is not the address number (which appears to be the 100 block of Harrison Avenue) but is a stand-in for the cornerstone—i.e., a building that predates the Civil War—which also appears to serve as the name for this new taproom.  (Incidentally, the streetscape featured in this photo is also a state boundary; the structures to the right are in the much smaller community of West Harrison, Indiana—population 250.  But the preservation of aged commercial buildings seems to have caught on in both states.)

The focal point here remains the construction year as a motif, one that still finds a place in the two most architecturally nonconforming structures. 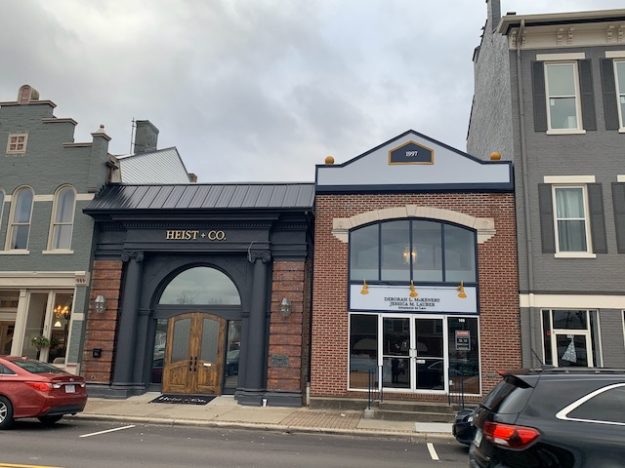 So it looks like the Heist + Company façade lacks a clear reference to the construction date.  But the elegant charcoal appearance is apparently a recent transformation; this Google Street View from spring of 2019 shows a considerably deteriorated façade under rehabilitation.  Meanwhile, the structure to the right adheres to the construction year motif… 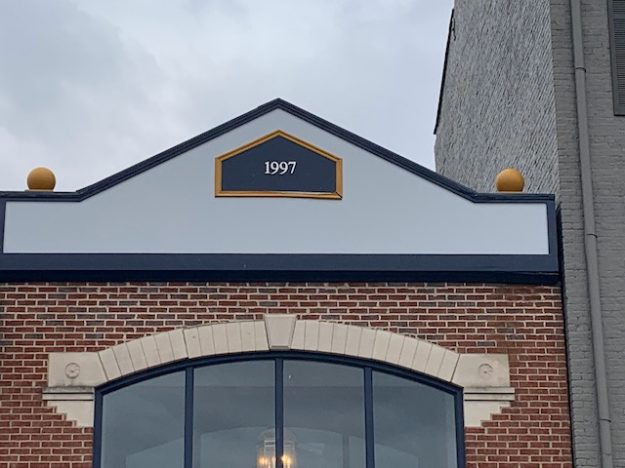 …but it’s from an entirely different century.  Scrutinizing the masonry, it now appears obvious that it’s a much newer edifice, and the wooden cornice lacks the same degree of ornamentation.  But it’s sensitive to the massing and street wall of Harrison’s main street, especially given that the time period (1990s) hardly reflected a widespread embrace of commercial infill in main streets the size of Harrison’s.  From the viewpoint of an ardent preservationist, the inclusion of the construction year is probably a contrivance—an unwarranted boast for a structure that halfheartedly mimics the spirit of Harrison’s 19th century buildings.  But for the majority of us, the conditions require this level of scrutiny to distinguish these law offices from everything else.  It works.  And the construction year becomes a common thread to reinforce the cohesion of a commercial corridor that has endured, even amidst the trials and tribulations of Cincy, just a short drive to the east.

2 thoughts on “The construction year: is it a building’s badge of honor, a brand, or both?”