Right-turn spurs get the axe in Alexandria: is it safer at any speed?

The vehicularly inclined among us have probably noticed how, in recent years, various cities have adopted new stripes, bollards, stanchions, and sometimes modified curbs that make it highly inconvenient to make right turns.  Yes, this is deliberate. No, it’s not happening to give motorists a hard time, though it definitely doesn’t make things easier, which is deliberate as well. Here’s an example in a newer part of town in Alexandria, Virginia. 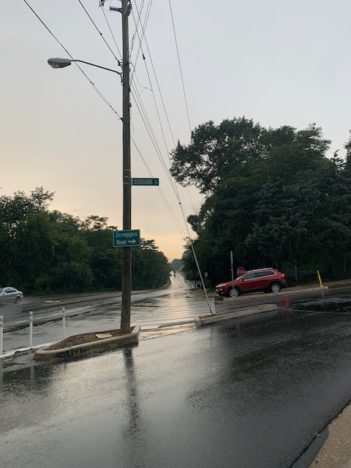 The busier collector road, King Street, connects Old Town Alexandria (about 1.5 miles to the southeast) to the more westerly DC suburbs like Falls Church and Tysons; it is, after all, Virginia State Route 7.  The connecting street, local Scroggins Road, gets only a fraction of the traffic, since it serves a single-family residential neighborhood, but since it provides a link between King Street and busy collector Braddock Road to the north, it probably receives considerably more free-flowing vehicles than the usual road of a mere quarter mile in length.

In the above photo, I’m standing at a spur that facilitates right turns from northbound King Street onto Scroggins Road.  But the photo is deceptive: in reality, a series of stanchions prevent access to that right-turn spur. Here’s a view from just a few steps backward. 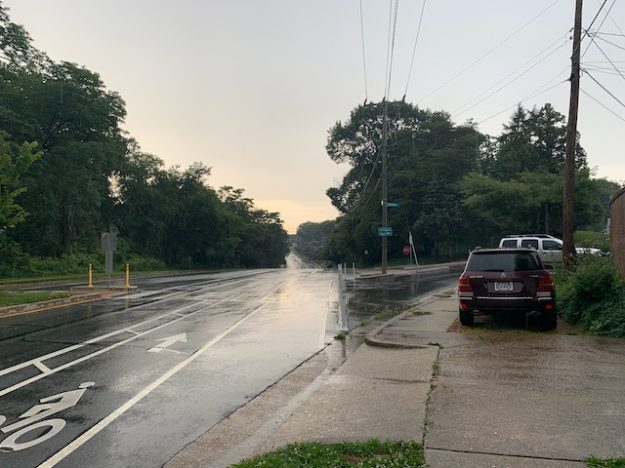 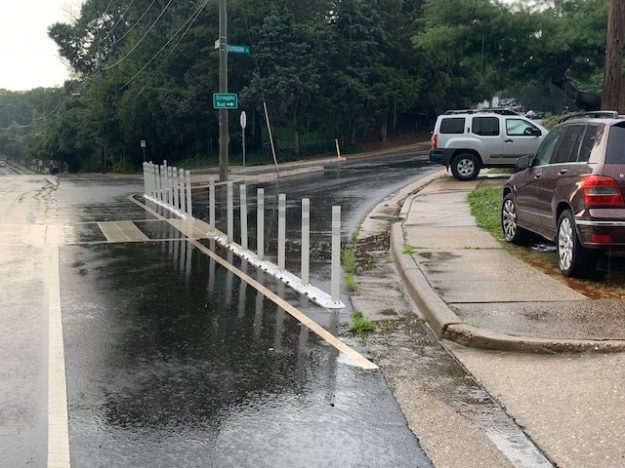 So why do this?  It’s not really complicated: the design of the spur came from an era when the primary value of traffic engineers and public works departments was to convey vehicles as efficiently as possible, and efficiency usually correlated almost exclusively to high speeds.  After all, the biggest factor influencing a Level of Service (LOS) is minimization or absence of delays. This right-turn spur configured a three-way intersection so that the turn radius was as generous as possible, precluding the need for drivers to slow down much–if at all–as they negotiated their way from King Street to Scroggins Road.  I don’t have the measurements for this right-turn spur, but if it’s greater than 35 feet, it will generally achieve maximum efficacy for facilitating high-speed right-hand turns. Here’s an overhead view of the site, with the key intersection circled in purple: 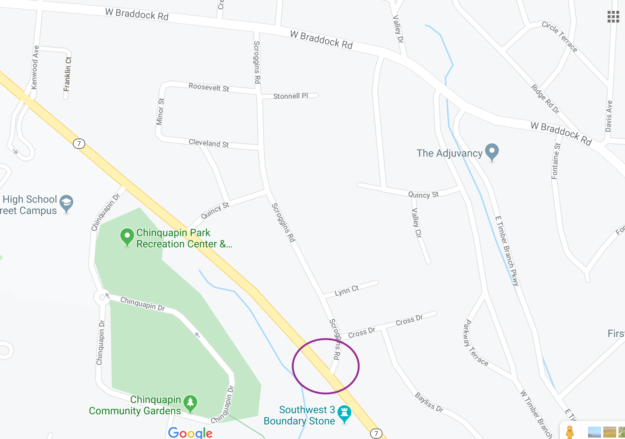 As if obvious from the map, it was never a T-shaped intersection; really more of a Y.  The right-turn from King to Scroggins is already approximately a 145-degree angle; the right-turn spur emphasized this generous turn, allowing vehicles traveling on average 35-40 miles per hour along King to minimize the need to decelerate as they veered onto Scroggins.  It’s possible they could maintain these speeds.

The result is nice for cars but terrible for the exclusively residential character of the neighborhood for which Scroggins serves as a backbone.  Here’s a view along Scroggins: 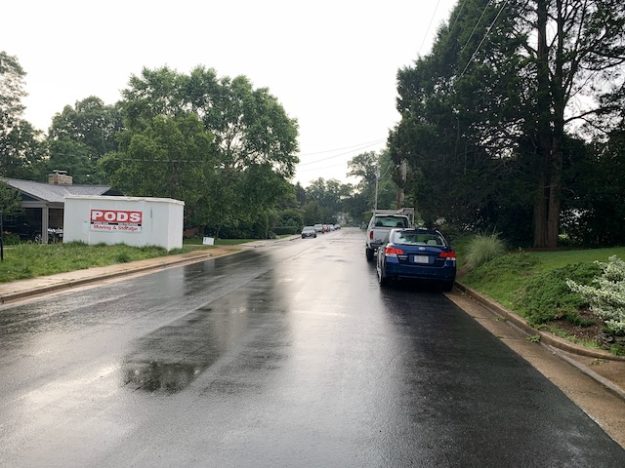 And here’s looking back in the other direction, gradually approaching the intersection with King Street (State Route 7): 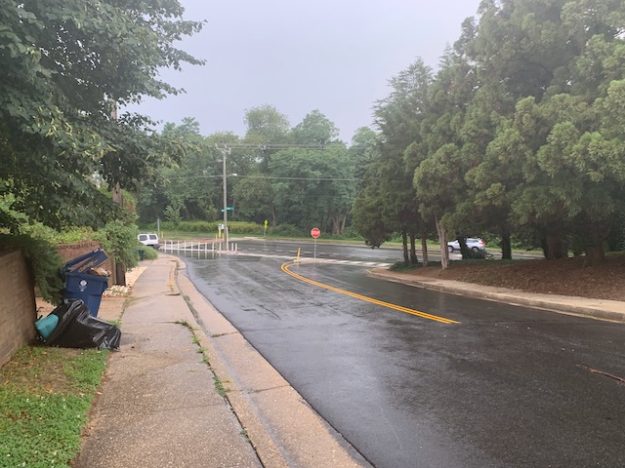 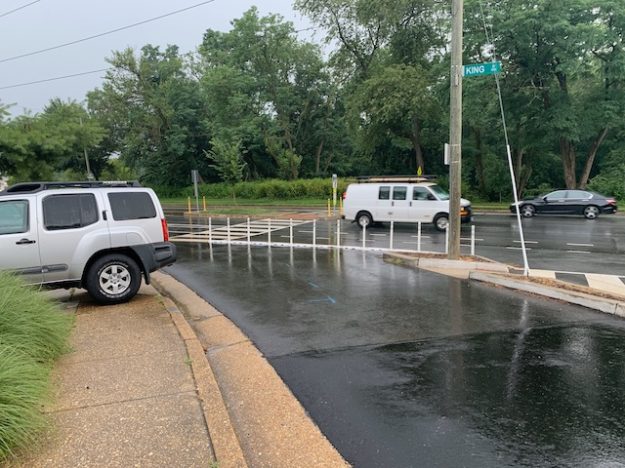 The only vehicles that will find utility to the spur are those that need the driveway that intersects it, indicated by the SUV in the left of the second photo.  And those vehicles can only access the driveway from the Scroggins Road approach.

This new transformation is onerous for motorists.  It forces them to enter the intersection at something much closer to a 90-degree angle, clearly visible in the right half of the photo below: 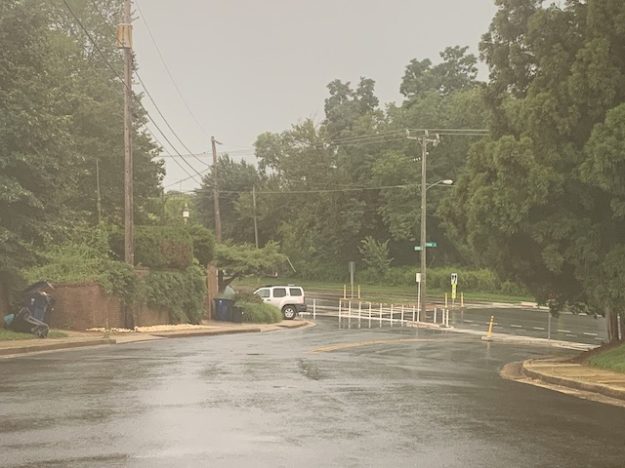 Through this new design, cars must slow to a near stop before turning right onto Scroggins–a safer condition overall.  The environment only stands to benefit from these mild interventions, which certainly make Scroggins Road less attractive as a cut-through street–a condition for which it is not suited and residents never expected it to become.

But it’s not just about the residential character.  Although this part of Alexandria does not get a great deal of pedestrian traffic, it certainly can accommodate them: sidewalks are usually present on at least one side of the major streets, and radar monitors the speed of motorists to prevent egregious moving violations.  These stanchions and stripes at King/Scroggins are part of a broader effort to improve pedestrian safety. 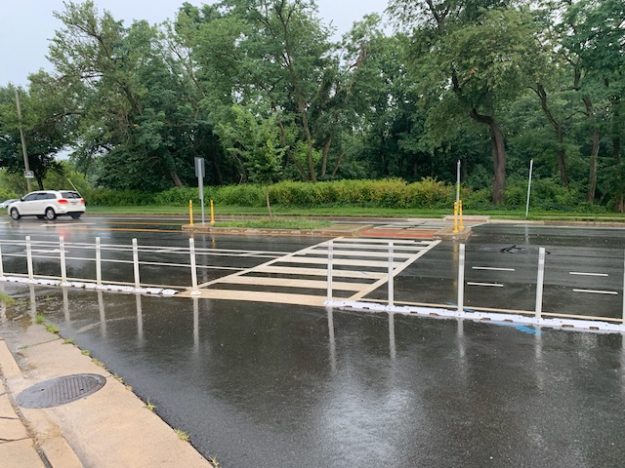 The lightly landscaped median creates a pedestrian island–a refuge allowing walkers to make it halfway across the breadth of King Street, then to wait safely for clearance coming from the other direction.  And then, once they’ve fully crossed King Street, pedestrians enjoy near-complete safety on the now restricted right-turn spur onto Scroggins.

These two Google Street View archived images show the full array of transformations that have taken place these last few years.  Here’s one from the fall of 2012, showing what King/Scroggins looked like with the right-turn spur fully operative.  Four years later, all the improvements are in place.  As a general rule, I would typically extol these efforts: they not only radically alter the character of Scroggins Road–reinforcing its purpose as an exclusively local street intended to serve homeowners and visitors to the neighborhood–but they reduce the likelihood of vehicle-pedestrian collisions, which, given the speeds of most cars traveling along King Street, could prove fatal.  Using mostly striping, lightweight reflective stanchions, and a few new curbs, Alexandria improved an intersection at a far lower cost than re-engineering the intersection altogether by ripping out pavement–much more akin to the felicious results in Bethlehem, PA than the less successful attempt in Baltimore. 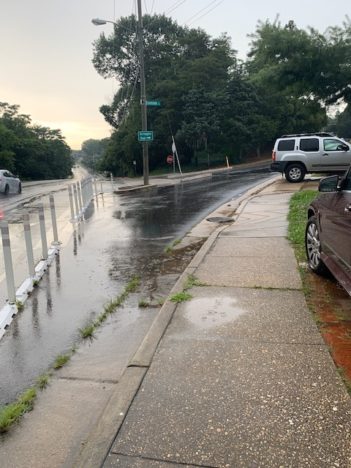 No, I don’t think the intersection of King and Scroggins will become a hub of pedestrianism any time soon.  But, just a quarter mile further along King Street is the entrance to a community center, and just beyond that, the main location (Grades 10 through 12) of Alexandria’s only high school.  In other words, the area affords numerous opportunities for pedestrians, and any effort to reduce risk deserves accolades. All the better if the Alexandria Public Works Department (or Virginia DOT) can achieve it with a little paint and some poles.  And while motorists might perceive this as an affront, given the history of designing right turns to accommodate them, at least we have one clear point where the conditions aren’t hostile to pedestrians. And when cars and peds come into contact, we all know who’s going to win.

PrevBeltsville Agricultural Research Center: an agrarian oasis in suburbia, nicknamed BARC but really more of a growl.
Coffee and commercial real estate: how to pair unlikely uses, for the sake of a better bottom line.Next

12 thoughts on “Right-turn spurs get the axe in Alexandria: is it safer at any speed?”