Pedestrian crossing signals: the old standard is almost obsolete. No need to lose our heads over it.

I no longer have a computer and therefore must use loan machines for the time being to complete any and all blogging work.  Fortunately, I have a new machine on the way, and this one will have astronomically higher-grade memory (16 GB, which is great for me), so it will allow me to complete work with comparatively lightning-quick speed.  For the last two years I have worked on a computer well past its prime that slowed to near uselessness; I was simply too lazy to buy a replacement. Now I have no choice, but it’ll be a remarkable change from where I’ve been for quite some time, slowing my own productivity through a machine with an outdated OS.  In the meantime, lacking the same capacity to sift through my photos that I normally have (backed up both on a cloud and external hard drive), I must end the year with some middling posts, which I hope are still of better-than-middling interest.

The standard for pedestrian crossing signals seems to be evolving toward greater standardization across the country, with more places using signals that both provide countdowns to tell the pedestrian the remaining time left to cross, and audible indicators to aid the blind and visually impaired in knowing when it’s safe to cross.  One other advancement in pedestrian crossing signals took place quite a bit longer ago: it was a real surprise in 2017 to come across this in downtown Jersey City, right across the river from Lower Manhattan. 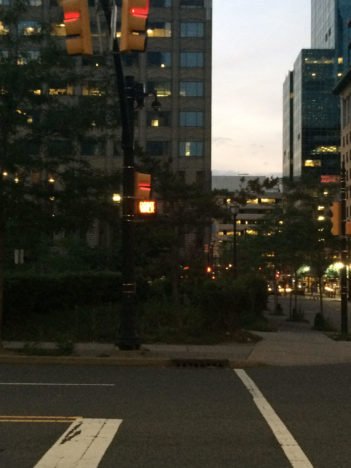 Blurry photo at dusk, but enough of the illumination is still visible.  Looks pretty ancient.  It’s a rarity to find pedestrian crossing signals that still use the words “WALK” and “DON’T WALK”, which public works departments largely eliminated in the 2000s, if not earlier.  I’m sure one factor for their elimination was that nearsighted people cannot necessarily distinguish the words, though that’s a small consideration since “WALK” and “DON’T WALK” have long been radically different colors.  My suspicion is the bigger issue is that text may prove insufficient for those who cannot read English (or cannot read at all), and visuals are much more effective at eliminating any chance of ambiguity. Though I have doubts that an open palm facing forward is a universal command for stop, it’s probably implicit across enough different countries and cultures to prove more accessible than any text.  (Which makes it a bit surprising that we have retained the word “STOP” in the red octagons that order motorists, but then, normally the issuance of a drivers license is contingent on understanding some basic rules of the road, which includes enough literacy for the most fundamental of signage. Transportation and traffic engineers cannot make the same assumptions about pedestrians, and must always use symbols or risk death if pedestrians cannot read the signs.)

Regardless of the future for these signals, my guess is that, in due time, Jersey City Public Works will (or already has) phased out those last removing text-based pedestrian crossing signals.  And while they almost certainly will replace with the picture-oriented countdown version, let’s hope they’re a bit more functional than this one I recently came across in downtown Indianapolis (with the glorious Vonnegut family designed Athenaeum building in the background): 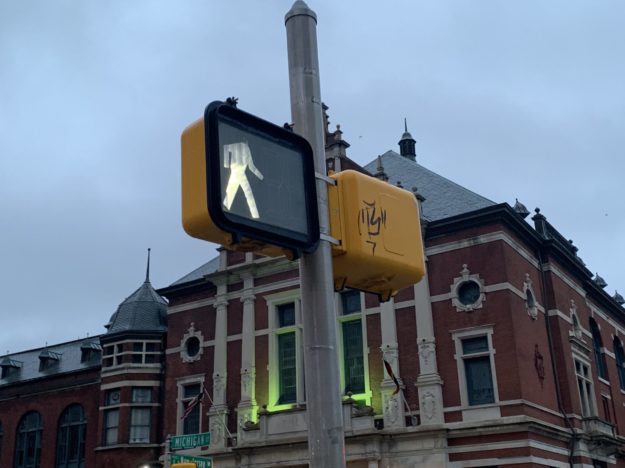 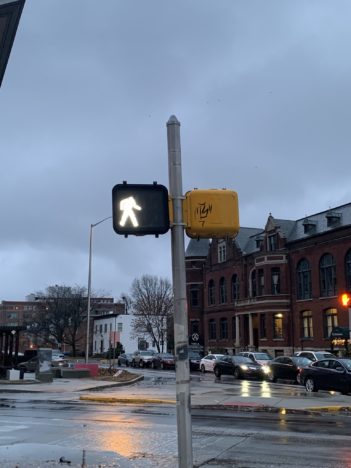 Do they have a separate symbol for those pedestrians who have not yet enjoyed the benefit of a good decapitation?

4 thoughts on “Pedestrian crossing signals: the old standard is almost obsolete. No need to lose our heads over it.”