As I restore the content from my old computer to the new one, I’ll be resigning myself to some shorter posts through the rest of the year, with the hope that everything gets sorted out and I can resume posts of greater substance in early 2020.  The serpentine road in the photo below may look like a standard rural environment just about anywhere in the eastern half of the US, and while that is partly correct, the least accurate word in that preceding clause is the word “rural”. Yet it’s not entirely inaccurate either.  (Perhaps “standard” is the false-flag word?) 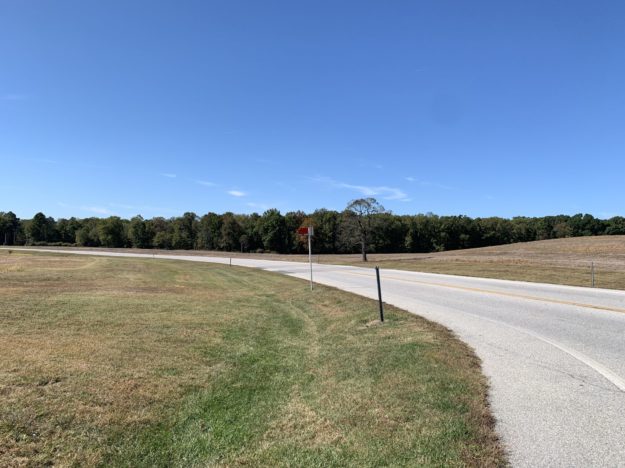 The road is a primary bath within Henry A. Wallace Beltsville Agricultural Research Area (BARC), an extensive stretch that the US Department of Agriculture owns and operates for the purposes of research in agricultural sciences.  Needless to say, since the land must replicate farming, it takes up quite a bit of space. What’s odd about it is that it’s in the thick of Washington DC suburbs. Literally. From the bucolic scene in the photo above, an IKEA is just about a mile and a half away.  Also nearby is a mixed-use commercial development (apartments and retail), townhomes, and a full-fledged regional mall just a bit to the south. The flagship campus of University of Maryland (go terps) is just a mile or two beyond.

BARC carves out a huge enclave (approximately 10 square miles) of essentially unsettled land in otherwise densely populated Prince George’s County, Maryland.  Founded in 1910 through the purchase of a 475-acre plantation, the character of the entire area at the time (approximately 15 miles from the National Mall) was as rural as this photo, back when Prince George’s County had only 35,000 people.  The research lands expanded exponentially in the 1930s and 40s (under Agriculture Secretary Wallace), just ahead of the rampant suburbanization of the county itself after 1950. These days, the county’s population approaches one million (second most populous county in the state) and the suburban development pattern exploded around unincorporated Beltsville after the construction of I-495, the Capital Beltway.  An aerial photograph shows this remarkable oasis of greenery surrounded by paved suburbia (or, if your preference is urbanism, an atypical swathe of cow country breaking up civilization). It’s bizarre. When one is in the middle of BARC, it’s virtually impossible to tell that suburbia is (at most) an eight minute drive away. But even as the land has increased in value exponentially, BARC remains an active hub for managing agricultural data (the National Agricultural Library stands right on the outskirts) and perpetuating research that advances best practices in agriculture.  As much as developers would love to sink their teeth into this fertile oasis, I see no evidence that it will ever serve any other purpose in the foreseeable future.

Nonetheless, key details scattered throughout BARC offer hints of the intense development nearby, which become more obvious after sharpening the focus on the roadway itself. 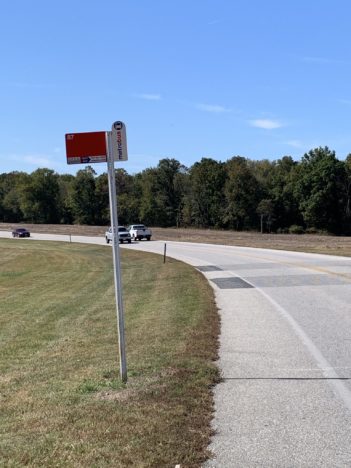 Powder Mill Road, featured in these photos, bisects BARC laterally, connecting the unincorporated (but heavily settled) community of Beltsville to the west with the equally urbanized suburbs near the Baltimore-Washington Parkway to the east.  It offers all the evidence one needs that this isn’t ordinary countryside: it gets far more traffic than a typical rural road, and, as evidenced by the small sign at the shoulder, it even features a bus stop. Yes, one of WMATA’s many transit routes passes through BARC, part of a series that, along with several of the subway (Metro) stops, keep Prince George’s County well networked with transit.  But perhaps most critical is the pavement itself at this segment of Powder Mill Road: just a little further in the background, one can see some conspicuous rumble strips, the well-known noisemakers that alert motorists of changes in roadway condition.  At this location, they are warning drivers of an obscured intersection right around the bend. But take a closer look: 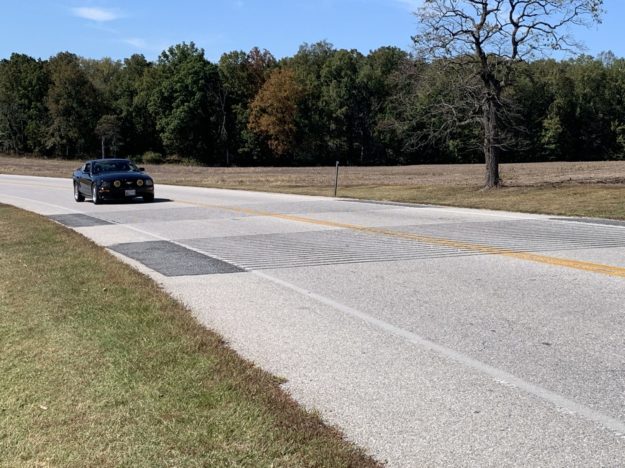 The road features a generous shoulder, largely attempting to accommodate bicyclists that pass through the area, an amenity one expects in a place like BARC, flanked as it is by suburban subdivisions.  But the portion of the rumble strips in the shoulders have a different color; the management of Powder MIll Road’s right-of-way (which, at this segment, is BARC itself) placed asphalt to eliminate the rumble on the shoulders.  Why? Because rumble strips, though merely a noisy vibration for cars, feature ruts that impose a highly uncomfortable–dangerous even– condition for the meager tires of bicycles, evoking a similar situation I wrote about a few years ago in New Hampshire, where signs specifically warned motorcyclists of unavoidable rumble strips on a shoulder, so they could adjust their speeds for the jarring sensation.

If nothing else, the paved-over portions of these rumble strips demonstrate BARC’s unusual hybridization of urban and rural conditions.  Powder Mill is among the most consciously designed through-streets in the sprawling agrarian campus. Many of the other roads in BARC lack a shoulder, feature huge ruts from wear and neglect, and even narrow to just one lane at key points (especially bridges).  In other words, they share all the expected characteristics of a rural road–yet busy highways are never more than a ten-minute drive away.  For example, Powder Mill intersects Sheep Road just a half mile away from all those rumble strips, and Sheep Road is as country as you get.  (An interesting feature of BARC are the agriscience-themed road names: Soil Conservation, Poultry, Entomology, Animal Husbandry, Dairy, and so forth.)  But Powder Mill receives hundreds–perhaps thousands–of vehicles each day crossing through BARC to get to other population centers, which explains the need for those rumble strips.  At the same time, the rumble strips are so loud and obnoxious that they have elicited nuisance complaints from some of the neighbors who live at right outside of BARC’s perimeter, approximately three-quarters of a mile away.  In future years, BARC leadership is likely to replace the strips with a less intrusive traffic calming device, in respect of quaity-of-life considerations to the neighbors. Best of all, however: as agrarian as BARC seems when one is driving through the thick of it, the southeast edge of the campus abuts another federal entity about as far removed from farm research as one can get: the Goddard Space Flight Center, courtesy of NASA.

PrevPedestrian crossing signals: the old standard is almost obsolete. No need to lose our heads over it.
Right-turn spurs get the axe in Alexandria: is it safer at any speed?Next

2 thoughts on “Beltsville Agricultural Research Center: an agrarian oasis in suburbia, nicknamed BARC but really more of a growl.”