Looking out the window from inside a café in Takoma Park, Maryland, patrons get astraightforward view of the café’s al fresco diners. 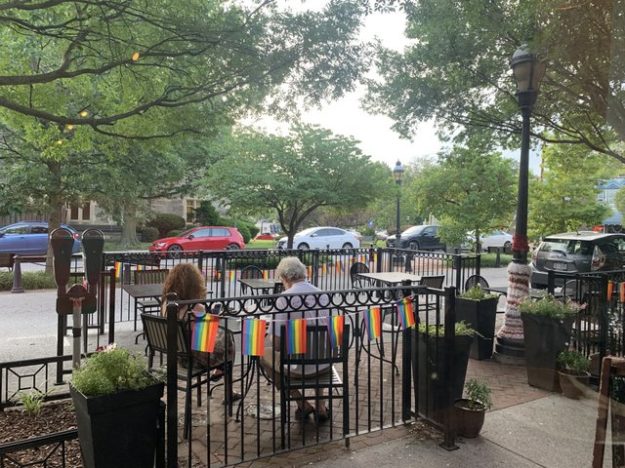 Nothing too remarkable about the image at first blush, beyond the unusually high level of care afforded to separating the seating from the sidewalk. Not only does the dining space feature attractive, movable wrought iron fencing that loosely matches the furniture, but the a tall and a short potted plant embellish the endpoint of each fence segment. Okay, I’ll grant that the plants themselves look a wee bit disheveled. But the effort is still greater than one might expect.

The seating area is also unexpectedly expansive. Way more expansive, in fact. While the couple featured in the photo is clearly sitting on the bricked portion of the sidewalk, the deuces just beyond them in the background are not. They’re perched in the street… 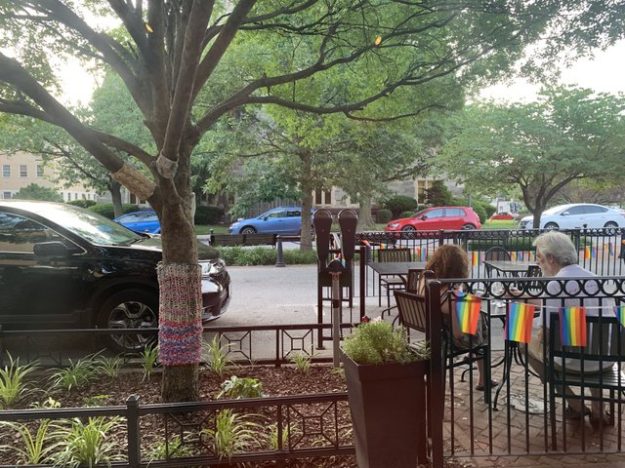 …in a metered parking spot, and the outer fence is the only thing protecting the tables from traffic speeding by. Okay, I’ll grant that it’s not exactly speeding; Laurel Avenue is one of the two primary streets in Takoma Park’s commercial downtown, and, filled with four-way stops and unusual kinks and oblique intersections, the conditions in downtown Takoma Park don’t exactly promote high-speed traffic. Only a block of Laurel Street has the characteristics of a commercial road; the remaining two blocks serve institutional or residential uses.

What this means, of course, is that the City of Takoma Park (population 18,000) has sacrificed a parking for the sake of enhancing outdoor civic space, by ceding the land to a local café for al fresco seating. Okay, I’ll grant that it’s a single spot, but it’s an opportunity for potentially hundreds of dollars each week. (After all, unlike the meters featured a few months ago in Carlisle PA, these in Takoma Park have real earning potential.) By most measurements, this is not a radical undertaking. But it does mean that the City has traded a revenue-generating vehicle (the meter) for a space ceded to the public good…except that it’s not public. It’s not a pocket park on the street; it’s the fenced-in domain of the café, and it is reasonable to assume that the café would have the right to restrict these tables to paying customers. According to the City’s website, motorists pay for the on-street parking using the Parkmobile app, suggesting that revenue doesn’t funnel directly to the City’s coffers; a private intermediary manages payment and no doubt collects part of the profits. The City would have to forge an agreement with Parkmobile to get away with sacrificing even just a single parking space and the potential hundreds of dollars the meter raises each week.  Under normal conditions, I would call this arrangement a parklet, a sort of easement that reverts on-street parking to a park-like use.  The July 2017 issue of Planning magazine features an article that copiously uses the term “parklet”, particularly when a municipality specifically ensures that the pocket park on a former parking space remains open to the general public, much like any other civic space.  I will eschew using “parklet” because I’m not certain this “under normal conditions”–that is, I don’t know if the City of Takoma Park has specifically ensured that this space is part of the public streetscape, or if it serves exclusively as enhanced outdoor seating for a single restaurant–and I don’t know if that restaurant can restrict use to its own customers.

Therefore, in the absence of a clear definition of the permitted end users, the City has made an unusual bargain, all for the sake of enhancing a small business’s al fresco dining, thereby shortchanging Parkmobile’s capital (those meters) for the benefit of Takoma Beverage Company. It’s just weird. But Takoma Park has never been a community to shy away from strange proposals. As a streetcar suburb to Washington DC that sprouted on hilly countryside about a century ago, the City has the unusual characteristic of straddling two sovereign jurisdictions: the State of Maryland and the District of Columbia, where the area adjacent to the incorporated town is a DC neighborhood simply called Takoma. Even more bizarre: the commercial district of the town straddles Maryland and Washington. While everything depicted in these photos along Laurel Avenue is exclusively in Maryland, one can turn a corner less than five hundred feet to the left and stand in the nation’s capital.

Takoma Park’s idiosyncrasies extend to its political climate. The “Azalea City” is one of the most liberal jurisdictions in the country, having pioneered such unusual policies as a self-declared nuclear-free zone; granting suffrage in local elections to 15- and 16-year-olds; and voting for non-citizens and convicted felons. Comprising largely of a near-equal blend of whites and African Americans, it’s among the most integrated communities in an otherwise heavily segregated metropolitan area, and the homeowners manifest their political activism more openly than even most residents in DC, judging from the numerous little signs perched in front yards. Given this penchant for progressive politics, it’s slightly less surprising that Takoma Park has appropriated metered space originally intended to benefit the City (and a national metered parking management program) for the sake of giving a leg up to a locally owned biz.   The expanded al fresco is not likely to stretch into the cold weather, and judging from a Google Street View of the same location two summers prior, it’s a newish experiment. The City can afford the mild loss in revenue; it probably developed some sort of escape clause in the contract with Parkmobile that allows this. And who knows? Maybe this extra seating will help keep the coffee (and booze) flowing at Takoma Beverage Company for many years to come.