I’m not very good at selling my blog as a product, partly because I don’t try, and partly because I just can’t for the life of me talk things up.  And so I begin with this post with a disclaimer on how tiny and inconsequential of a subject it is. At the very least, I recognize its smallness, so that the article doesn’t just come across as navel-gazing.  It’s a follow-up on an equally small topic from several months ago, but I feel compelled to write it because I still want to crank out content, even as my computer remains on life support.

My first article on DC’s fancy new riverfront development, The Wharf, generated a reasonable amount of discussion.  I assessed its overall viability as a reaction to other mega-developments that had both flourished and flopped, and my final judgment on The Wharf was (and still is) mixed.  The microcosm for my study was a less-traveled side street that hosted a single retail space that appeared to be in constant turnaround, perhaps deliberately so–that is, it was dedicated exclusively to small retailers for short-term leases (“pop-ups”).  A local chocolatier called Harper Macaw had just departed this quiet spot, no doubt taking advantage of the comparatively economical and flexible leasing conditions compared to most of the rest of The Wharf. A simple review of the company’s online details suggested to me that Harper Macaw was retaining a production facility at a less-than-glitzy light industrial space in a non-touristy, mostly residential part of Northeast DC, no doubt to keep operating costs much cheaper.  And, in this era of retail dearth, when both local start-ups and long-standing national chains are feeling the pinch from online shopping, a bricks-and-mortar presence seemed unlikely to prove lucrative to an enterprising indie like Harper Macaw.

Well, despite the evidence suggesting that Harper Macaw’s storefront presence at The Wharf was a bust, it seems to be giving bricks and mortar another try: 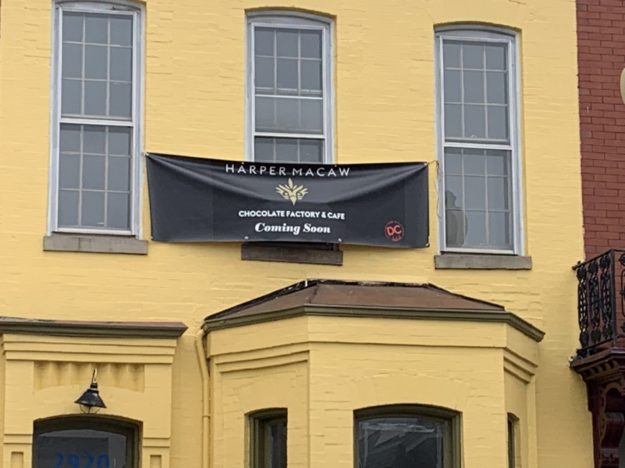 But unlike the previous effort, it’s not seeking space within a mega-development conceived within the last few years.  In other words, not The Wharf. This latest incarnation leases a storefront in an attached commercial building in an older part of town. 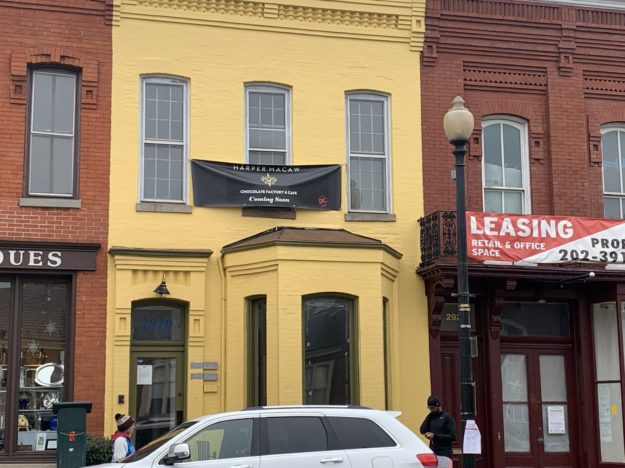 Much older, in fact.  This structure sits at the eastern end of M Street Northwest, the primary commercial artery in Georgetown.  And this time it’s a Chocolate Factory and Café–not just a place to purchase this perishable product in elaborate packaging, but to consume it (among other things, presumably) on site.

Harper Macaw’s lease at the obscure site on the Wharf was short-lived, but presumably deliberately so: the company’s website indeed references the space as a pop-up.  Meanwhile, the signage announcing a café suggests at least some rudimentary food preparation will take place on site, indicating the storefront will involve a more elaborate enterprise–the sort of undertaking one expects when taking on a long-term lease.  And M Street in Georgetown has long been one of the most celebrated dining, shopping, and entertainment destinations in the entire District. Having gentrified as early as the late 1960s and remaining a premier address during DC’s perceived nadir in the 1980s (when it was both the epicenter of the crack epidemic and the nation’s murder capital), Georgetown’s association with prestige has gone unchallenged across numerous presidential administrations.  It’s quite likely the single most famous neighborhood in the nation’s capital. 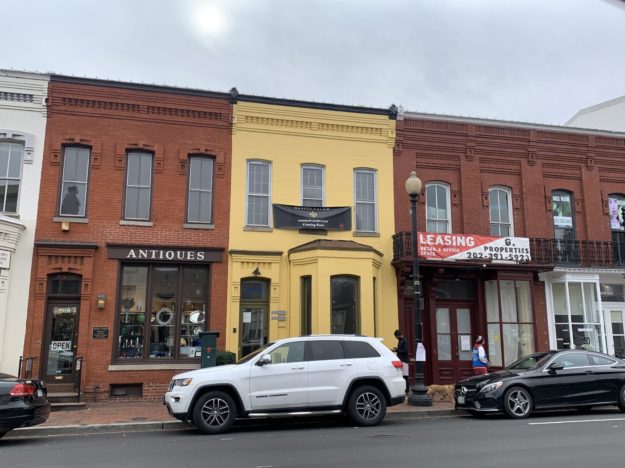 But recent analyses of the economic activity in Georgetown suggests it is losing ground not just from online shopping but from the growing visibility of other emergent retail destinations, like The Wharf, Dupont Circle (Connecticut Avenue), Logan Circle (14th Street), and the ritzy department stores of Friendship Heights and Bethesda are just a few miles away in the Maryland suburbs.  Multiple analysts have noted some high-profile closures within Georgetown, and local councilmembers are growing increasingly worried that the Business Improvement District (BID) has lost sight of what might distinguish M Street in the face of escalating competition.  (Even worse is the intersecting Wisconsin Avenue NW, which features additional shops on an uphill slope, but analysts believe it has been hit the hardest.)  Among the most recent and devastating departures was the summer closure of Dean and Deluca, a mainstay along M Street for a quarter century.  The upscale grocer’s departure seems more like a harbinger of the company’s profound financial troubles: it closed its flagship SoHo location a few months later, and, as of November 2019, has reduced its portfolio to a mere two locations in Honolulu.  While Georgetown can hardly blame its diminishing luster to the loss of this neighborhood anchor, it’s still devastating for the perception of vibrancy in what had long been one of the premier shopping streets.

Nonetheless, Harper Macaw has chosen to rent a space at one end of the corridor.  I’d suspect that this decision indicates one of two things: that this local confectionary has greater hopes of strong performance in Georgetown than in The Wharf (in other words, the Wharf’s desirability isn’t what it’s chalked up to be), and that property managers in Georgetown, desperate to lure new tenants, have started lowering leasing rates to the point that ambitious mom-and-pops can give it a try, while the coveted national brands continue to flounder.  Or, possibly, it’s a bit of both. Regardless, I hope to follow the prospects of Harper Macaw at its Georgetown location intently over the next year, as it becomes increasingly difficult to find any good rules of thumb to help the viability of both long-term retailers (like Dean and Deluca) as well as the promising upstarts (like Harper Macaw). The Harper Macaw approach–keeping its primary manufacturing in an obscure, cheap location while it hopscotches around various tiny storefronts for its high-profile showroom–may be a shrewd solution.  It reveals an enterprising retailer’s need for hypersensitivity to subtle differences between sub-districts (Georgetown versus The Wharf) or even micro-districts (the east end of M Street versus the west end). On top of it all, these nascent small businesses must develop the nose of a bloodhound for any technological advancements that could shift the already persnickety market even further away from conventional shopping–and must adapt the best practices to their websites posthaste.

A company like Harper Macaw may indeed fulfill an untapped demand for a chocolate café, particularly in light of the success that craft coffee shops, distilleries, and microbreweries have enjoyed in recent years.  And, if the leasing rates are cheaper than in the past, Georgetown’s M Street may be the optimal pilot location. Then again, it might make the same missteps as local hot-drink purveyor Capital Teas–from approximately ten locations at its 2017 peak to an online-only establishment two years later.

PrevTechnically, a hiatus.
Pedestrian crossing signals: the old standard is almost obsolete. No need to lose our heads over it.Next

12 thoughts on “Harper Macaw, a local chocolate biz, hopes to flavor DC’s M Street. Will the partnership end up bittersweet?”