A recent visit to a popular attraction in northern Virginia revealed an unexpected little food court. 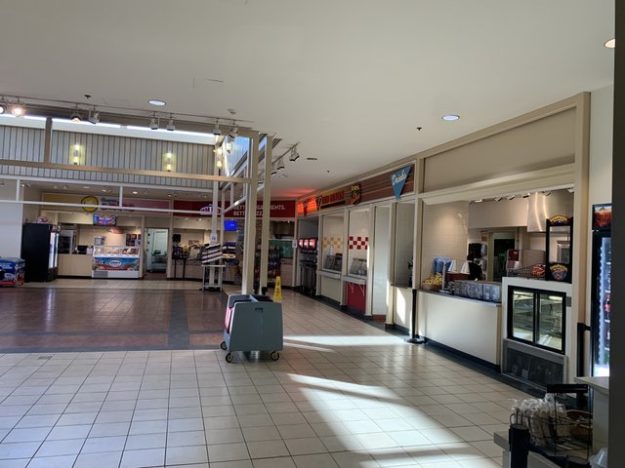 Though it looks pretty lifeless from the photo, I don’t think it was struggling; I caught it right before the end of the business day, so things were winding down. Needless to say, this food court boasts plenty of sunlight and seems impeccably maintained. It clearly isn’t all that large, but it doesn’t need to be. And the combination of white with mauve/teal tile patterns suggests that this food court hasn’t seen a renovation in quite some time; it’s a dated aesthetic. A pivot slightly to the left demonstrates the modest size of the dining area. 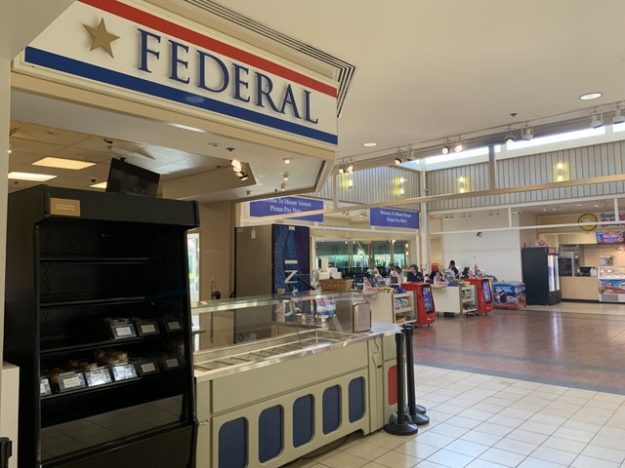 From this vantage point, a few peculiarities no doubt become a bit more conspicuous. The word “Federal” at the top is strange; perhaps it’s a particularly patriotic-themed mall? The northern Virginia setting—just a hop skip and a jump from the nation’s capital—is more likely to prompt references to the federal government than other parts of the country. But what are those strange kiosks in the background distance, like a checkout station? That’s atypical for a food court.

No more fooling the reader here: it’s time to reveal exactly what this attraction is. Most malls have pretty nondescript façades, but this one boasts a little more attention to detail. Here’s the main gateway to the food court depicted in the two previous photos: 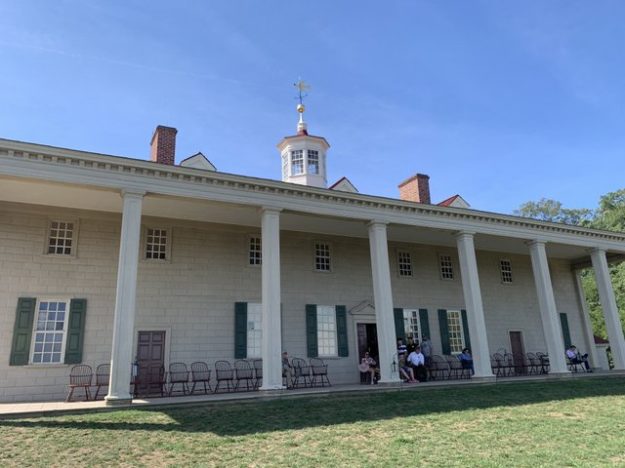 Look familiar? It’s the entrance to George Washington’s plantation home, Mount Vernon. (In fairness, it’s the back entrance rather than the front; scaffolding covered the front during my visit, so it was less than aesthetic. And those kiosks at checkout? The blue signs above them say “Welcome to Mount Vernon. Please Pay Here.”)

Still as privately owned as it was when it housed George, Martha, and her children from her first marriage (they had no children of their own), Mount Vernon is not just a stately home and a parking lot, separated by a verdant field—though it has all of that. It also features family burial grounds, restored quarters for enslaved people, the ancillary buildings that housed trades, gardens and nurseries, and even a necessary—the carefully sequestered outhouse. And those are just the historic portions of the grounds. 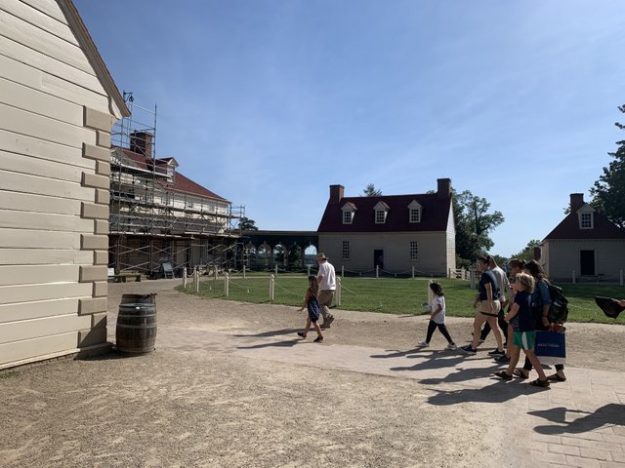 A glance at an Estate Map indicates that, while the majority of the buildings on Mount Vernon’s grounds are indeed restored structures that contributed to the plantation’s operations during Washington’s lifetime, most of the total square footage of the structures postdates the Washington family. That is, the largest buildings on the estate all serve as administration, interpretation, and supplemental tourist attractions, and the Washington-era structures are numerous but comparatively small. These contemporary supplemental buildings include a museum within the Ford Orientation Center, a separate building featuring an expansive gift shop, the storied Mount Vernon Inn (dining with table service), the Fred W. Smith National Library for the Study of George Washington, and numerous other structures devoted to scholarship, preservation of artifacts, groundskeeping, and other administrative services necessary to ensure both the continued reverence for the premises and the maximization of the tourist experience. Owned since 1858 by the Mount Vernon Ladies’ Association, this most famous of presidential homes is, as it should be, a well-oiled machine.

But it’s still a bit off-putting to see something as blandly commercial there on the premises of a National Historic Landmark. The details of the food court’s interior, which evoke the early 1990s, may bespeak a time when adding mall-like elements actually seemed like a savvy strategy. And, in Mount Vernon’s defense, the grounds are expansive and remote enough that the numerous visitors (approximately a half-million each year) are likely to grow a bit peckish, to the degree that a sit-down meal at the Inn may be too time consuming (and expensive), while vending machines may simple seem inadequate—and even tackier. Though over 8,000 acres during Washington’s lifetime, Mount Vernon today is a mere 500 acres, with developers having gobbled up the peripheral lands and converted them to upper-middle class residential tracts befitting the Fairfax County suburbs. Even with the residences nearby, Mount Vernon feels sufficiently isolated that it forces its visitors into a state of short-term captivity. Like most museums over a certain capacity, where guests are likely to linger a minimum of ninety minutes, it needs a place for people to grab some food. 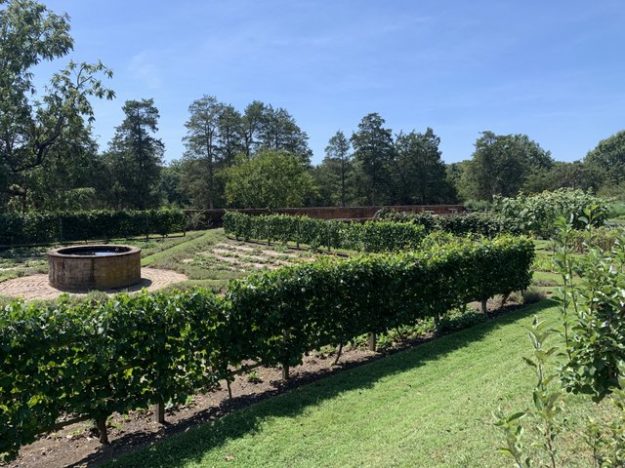 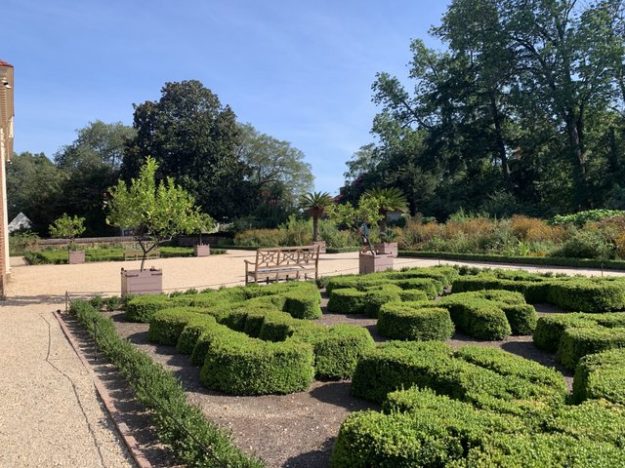 I confess that I spent no more than a minute or two poking my head into this food court, so it’s unfair of me to cast too many aspersions. And I didn’t purchase anything. My only disappointment is that, despite the considerable expertise devoted to preservation and interpretation at Mount Vernon, the care and sensitivity of the depiction of the slaves’ quarters, and the thoroughness and technological sophistication of the museum, the individuals who conceived this food court seem to have operated under the same principles as food provision in an airport: a diversity of offerings is far more important than presentation, and the prices can be high, since people are stuck there and if they’re hungry they can’t really be choosy. And, for those who administrate and manage Mount Vernon as an attraction, the incentive to renovate this interior to something less dated and more interpretive is largely absent, since the food court’s captive audience is unlikely to vaporize anytime soon (a condition that places these 4-5 little restaurants in much firmer financial footing than the restaurants in most malls).

This desultory approach to satisfying visitor hunger seems particularly ironic, given how many of the grounds—as well as the interpretive material—focus heavily on Washington’s considerable scholarly knowledge of cultivation and food preparation. But, outside of the cultural fidelity visible at Mount Vernon Inn, the best this vast plantation can offer for foodstuffs is a thawed slice of pizza on a sturdy plastic tray. George and Martha would be mortified.

PrevA construction staging area and a sidewalk: never a healthy pairing, but sometimes the treatment is worse than the disease.
Takoma Park, DC’s preferred prodigal suburb, takes al fresco to the streets.Next