A construction staging area and a sidewalk: never a healthy pairing, but sometimes the treatment is worse than the disease.

For most of the 21st century, and certainly in the last ten years (since the Great Depression) the majority of American downtowns have enjoyed a reinvestment no longer measured merely in spruced-up old façades. The cranes, dozers and other construction equipment are all the evidence one needs. People are returning to central business districts, in part to work but—in a trend that would have been inconceivable to municipal leaders as recently as 1990—primarily to live. Cities that formerly had little to no downtown residential presence now boast shiny new 20-story apartment buildings. Cities previously pockmarked with vast surface parking lots are witnessing new multi-story developments sprouting from paved-over nothing. Given all this construction, it should come as no surprise that the capacity is limited for these snugly situated urban parcels to hold all that construction equipment. All too often, the scaffolding extends onto the sidewalk, forcing pedestrian access onto the opposite side of the street.

And here’s where our cities diverge. Some of them grant a wide berth to the construction team, allowing it to treat the entire parcel as a staging area, all the way out to the curb, thereby treating the pedestrian easement and sidewalk as an extension of the work zone. Other construction sites are even more libertine about their work zone, stretching all the way into the on-street parking lane of the adjacent street. Others take a much more conservative approach, like this example I featured in downtown Raleigh from a few years ago, where the contractors constructed an elaborate, tunnel-like sheath around the sidewalk, thereby keeping it open to pedestrians and protecting them from potential construction-related accidents.

Why such inconsistency? Well, in an optimal world, this is purely a local concern, managed by a municipality’s land development regulations. And, as is often the case, larger cities with higher costs of living use more stringent standards for how much a construction crew can encroach into either a pedestrian easement (i.e., the sidewalk) or the public right of way (i.e., the street). Thus, a larger city like Raleigh is more likely to impose strict standards on developers and construction companies, forcing them to keep their work isolated to the parcel, or, if there’s the threat of falling debris, providing a covered passage for pedestrians—basically a tunnel. Regional economic health might also affect the outcome: a surging city with a coveted downtown (again, like Raleigh) is far more capable of imposing restrictions on land development without scaring it away; economically struggling cities are much more chary to put barriers up to potential downtown investment.

These basic principles seem to dissolve in our nation’s capital. An alpha city like Washington DC boasts both extremely high land values and a considerable level of downtown investment, as manifested by the panoply of cranes thrust onto the horizon, visible when crossing the Potomac. In some locations, the construction team provides a safe, secure tunnel along the sidewalk, with abundant signage and lighting, ensuring safe passage for pedestrians so they don’t have to walk in the street, or cross to the other side of the road. But at this location in the Navy Yard neighborhood, we get something else. Here’s an older apartment building with construction fencing on the vacant lot immediately to its right. 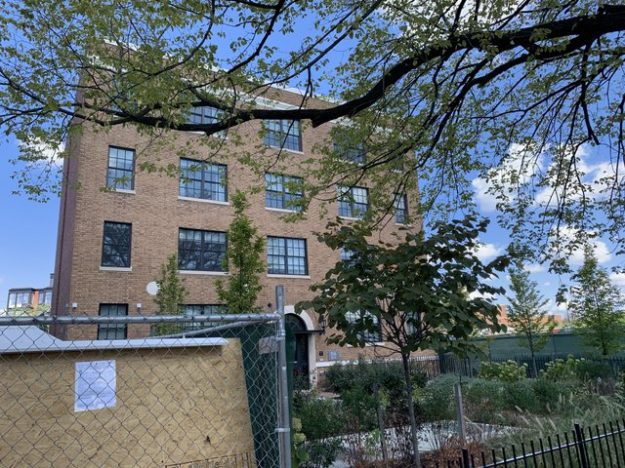 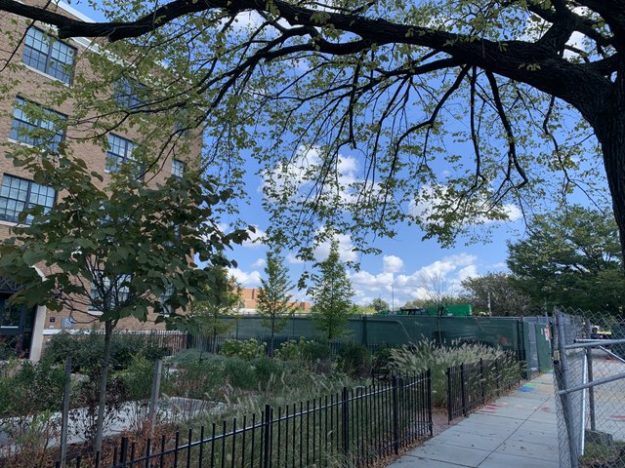 It looks like a new apartment building is going up. No surprise. In the Navy Yard, they sprout like dandelions. In this instance, the sidewalk fronting one street remains intact; a curb cut allows for easy vehicular entrance, but the fence stops at the parcel line. Pedestrians can pass by easily. 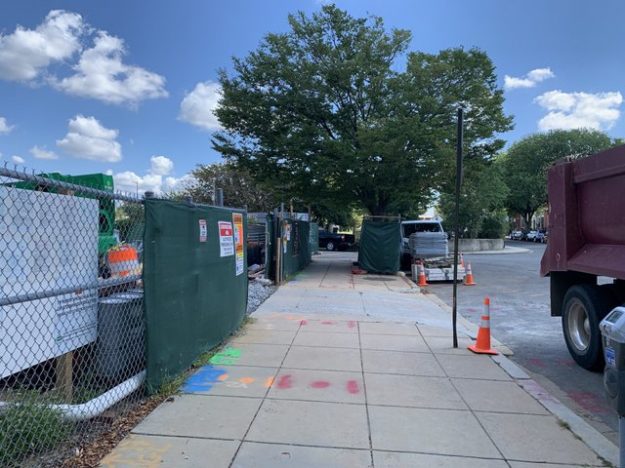 But turn that corner and the other street frontage features an entirely different arrangement. 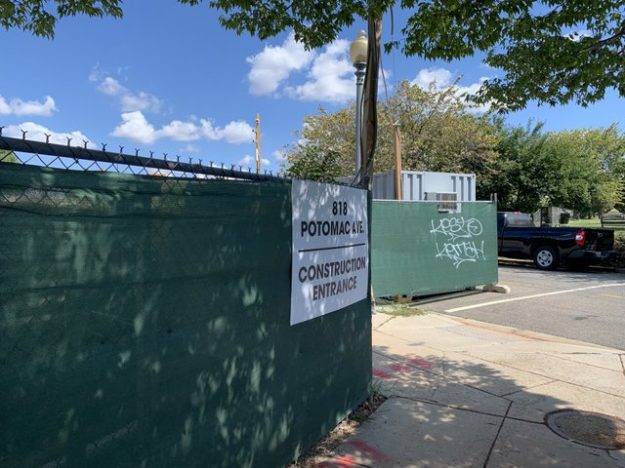 A construction trailer stands perched against the curb of 9th Street SE, occupying the entire lane of on-street parking and about half of the cartway for vehicles traveling southward. The nascent staging area. 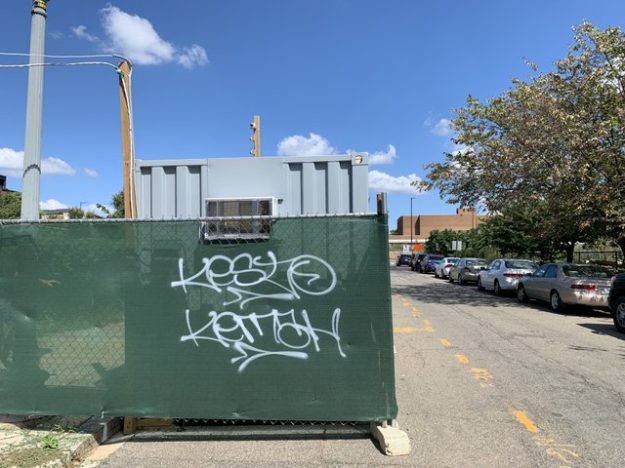 What had been a two-lane local street with curbside (on-street) parking on each side now has a new configuration for the length of this block. After walking through the sidewalk passage between the construction staging area and the fence along the parcel line, I emerge on the opposite side and can look back at the street from this new direction (southward). 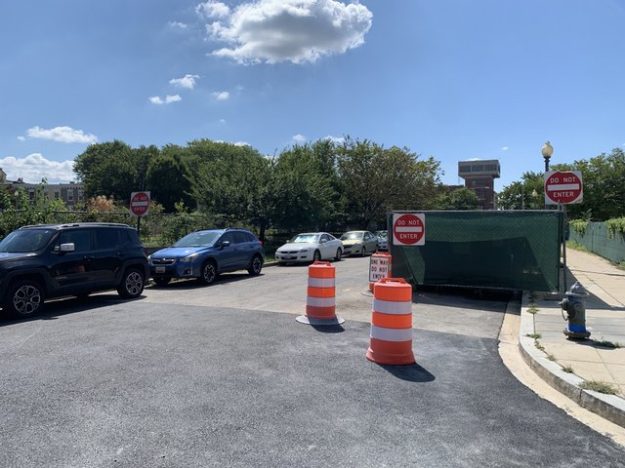 From the typical urbanist’s perspective, this arrangement is reasonable: it prioritizes pedestrians over cars, obviating the need for them to cross to the other side or walk in the street. And it screens the pedestrians from both the construction site and the staging area, visible in the photo below. 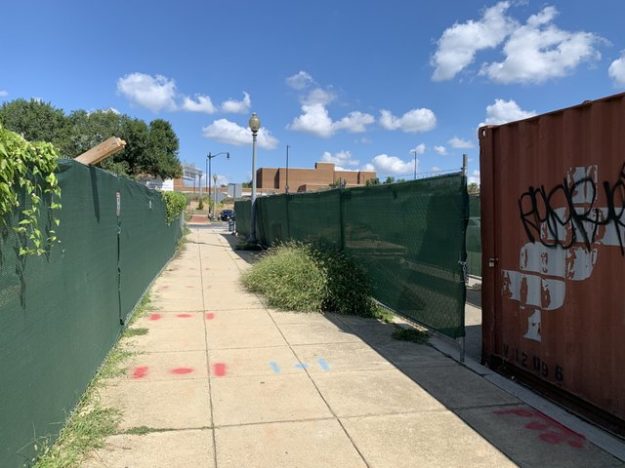 Good deal. But it creates an unusual predicament for motorists, and a confused driver may nullify many of the safety benefits for pedestrians. Looking southward once more, it becomes obvious.

The presence of the staging area takes a formerly two-way street and, for the length of this block, forces it into a one-way configuration. All of the “DO NOT ENTER” signs are temporary and reflect the current construction conditions.

This change is nothing profound, but it’s jarring for the typical motorist, who isn’t likely to be expecting a one-way street in this area, thereby forcing a northbound turn. And for motorists who are used to the road network here in the Navy Yard, it’s a jarring irritation. And it wouldn’t surprise me one bit if most drivers behave like the one I encountered while I was out taking these photos: heading eastward on L Street SE, she gets ready to make the turn at this corner… 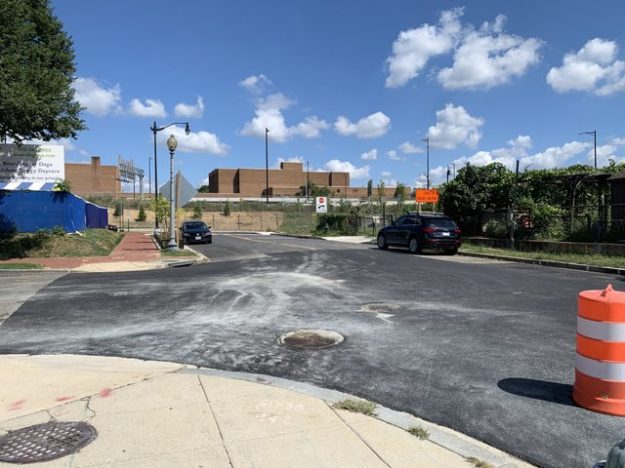 …but, rather than confronting the sign and turning northward on 9th Street SE, she violates the sign and goes southward—the wrong way on this one-way street segment. She wasn’t expecting this, and she’s not going to let a poorly monitored construction site impede her from the direction she wanted to go. 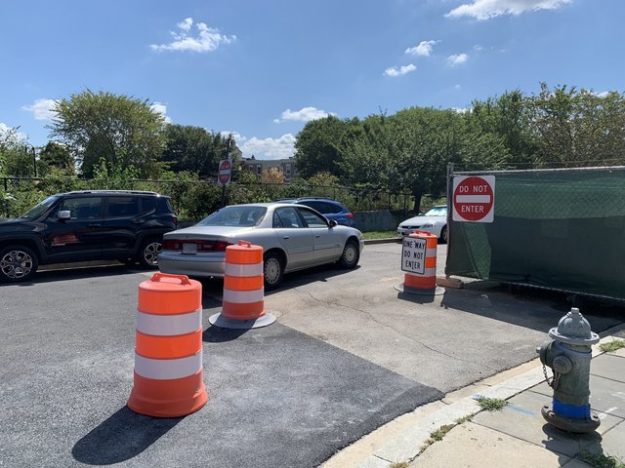 In a Buick, no less! If the timing were any worse, the motorist could have plowed into a pedestrian at the next corner who didn’t look both ways, not anticipating cars to come from that direction. Or the motorist could have suffered a head-on collision with another car going the correct way on this temporary one-way street. Pretty bad stuff.

Limited access to the Internet at the moment keeps me from delving into this as much as I’d like, but generally the regulation of construction practices and designated staging areas is a purely municipal function, and the Code of the District of Columbia would offer the full range of regulations that determine what is acceptable for the occupation of public rights-of-way or pedestrian easements during intensive construction and land development. In the state whose regulations I know the best, the Commonwealth of Pennsylvania, it is the SALDO (Subdivision and Land Development Ordinance) that provides the stipulations under which general contractors, developers, and construction teams must abide. And land development regulations are essential: while Pennsylvania statutes do not mandate that a municipality have zoning (some rural boroughs and townships in the state have no zoning or land use regulations) it is required by law that a municipality either have its own discrete SALDO or defer to the county, which has a countywide SALDO for the purpose of executing subdivision and land development. These regulations are just that important, and the safety issues presented through these photos in the Navy Yard explain precisely why so many municipalities—and states—have determined that they are necessary. But they only work when applied and enforced consistently.

The fundamentals of land development lend credence to the fact that this particular vignette in DC’s Navy Yard is a total head-scratcher. I can defend this decision from an urban planning angle, because it provides the optimal solution in so many respects: it defers to pedestrians, and it still allows for some off-street parking in a dense urban setting where parking is often scarce. But it shifts the problem to a new domain. The regulations imposed on this staging area allow it to block one-and-a-half cartways on 9th Street SE instead of the sidewalk, and, in lieu of remaining a two-way street, the staging area forces it to become a one-way street temporarily. This condition clearly is legal and viable from a traffic management perspective, but it merely results in the “least bad” solution, rather than one that is particularly good. (And even the “least bad” qualifier is dubious.) Incidentally, these photos, which date from early September 2019, reveal an extremely volatile arrangement. I returned a few weeks later (October) and the staging area had migrated away from the street and was blocking the sidewalk; unfortunately I did not think to take a picture. But a return visit just the other day (in early November) revealed the staging area back in more or less the same configuration as before. 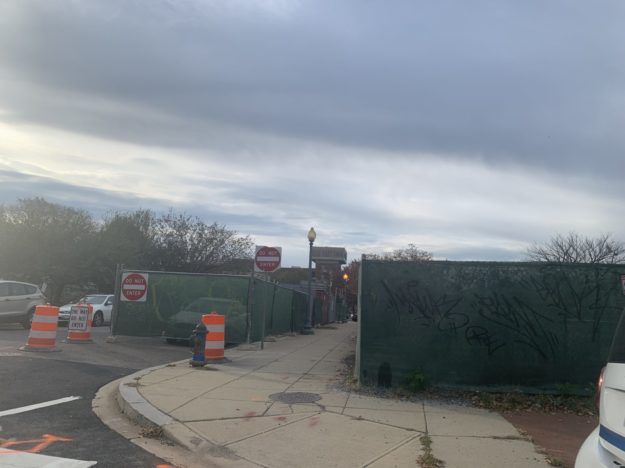 How does a single chapter in a municipal code allow for so many differences? It’s particularly baffling when, in other parts of Navy Yard just a few blocks away, the staging area must remain entirely within the parcel itself with an unimpeded sidewalk, while in other situations, both the sidewalk and the on-street parking lane remain completely obstructed, forcing pedestrians to cross the street. It’s hard to find any consistency in the DC approach—a condition that defies credibility, given the expertise and high propensity for planning and land management in this alpha city. My suspicion is that the land development and construction regulations are riddled with conditions: that is, different standards for a staging area depending on variables like a) the size of the parcel; b) the anticipated density of pedestrians in the area; c) the traffic carrying capacity of the adjacent road (local, collector, arterial), d) the phase and duration of construction. Or the developer could have claimed hardship and sought a variance from certain regulations, though that is typically far harder to achieve with land development than with zoning. This being DC, one can only speculate with those developments where the staging area appears particularly sloppy or inconsistent: how much does the contractor contributes to local political campaigns?

Regardless of the circumstances at 9th and L Street in Navy Yard, it appears that lax or inconsistent enforcement of nebulous standards can create a situation where the treatment is no better than the disease. Despite the open and unobstructed sidewalk, the weirdness of this street segment actually feels all-around less safe than it would if we pedestrians had to walk 50 yards on a not-very-busy local street. And 9th Street SE is most certainly local. Considering the greased palms and bypassed rules that seem to have resulted in this strange configuration, that unwitting Buick might just be the canary in the coalmine.