Self-serve from a sleeper: train cars out of context to coax new customers.

Growing up on the south side of Indianapolis (the city limits but still highly suburban in character), one of the most coveted places to celebrate birthdays for the under-ten set was in a tiny McDonald’s operating out of a repurposed train car. And to this day, a popular, long-standing accommodation in downtown Indy is the Crowne Plaza Hotel and Resorts, part of the city’s iconic Union Station, in which guests can choose to stay in converted train berths. And, in a more recent visit to my home city, I visited a popular local restaurant chain (Chicago’s Pizza) that shared an entrance with a self-serve frozen yogurt shop, called Red Line Frozen Treats. 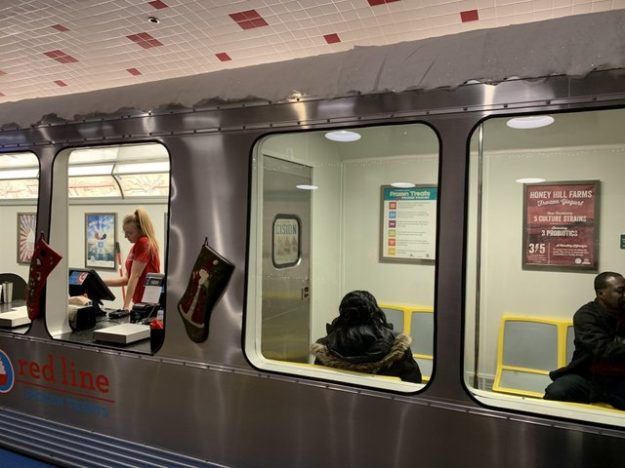 A good part of the operations for Red Line Frozen Treats—both the cashier and customer seating—operate out of another repurposed train car. I’d be very surprised if it’s an authentic CTA relic, but one thing I know: the signage almost completely echoes the same directional guides that one finds at every stop along the el. 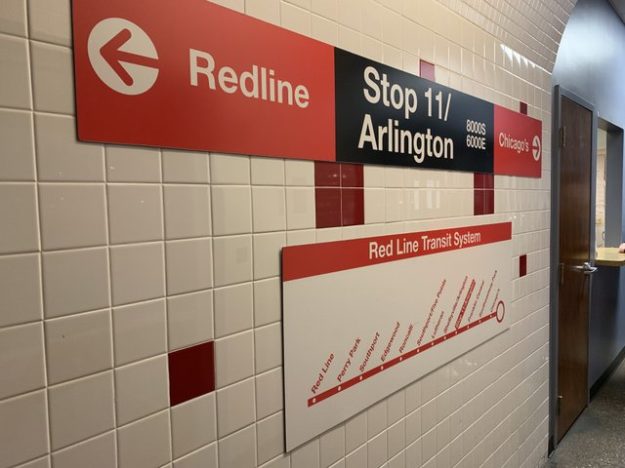 Lacking the ability to juxtapose this sign with an authentic CTA marker, I cannot confirm if it’s a perfect imitation. But it’s a valiant effort: it looks like Arial font, the white lettering on a black background is almost identical, and the guide to other “stops” looks like something one might see along the CTA’s Red Line, with various points of interest in Indianapolis instead. (“Stop 11/Arlington” is the name of the intersection for this pizzeria and frozen yogurt shop.)

Well past the froyo fad—they were ubiquitous in the 2010s—these days many establishments must hook their potential clientele with a gimmick, and Red Line Frozen Treats most certainly found one. People young and old like imagining themselves in a train car, and Indianapolis does not have a subway (and is highly unlikely ever to get one), while Amtrak lines to the city are infrequent, with the State having eliminated the Hoosier State line’s $3M annual budget earlier this year, reducing service to Chicago to just three days a week. With these limitations, the very act of being in a train car is atypical to most Indy residents…and most Americans at large. 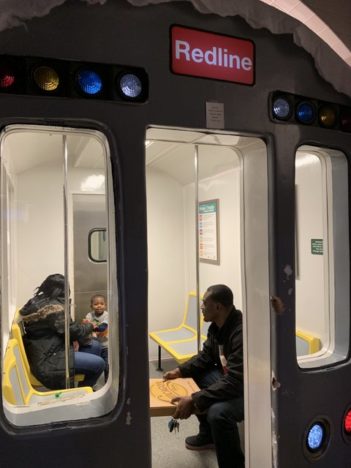 So I’m not confident that the popularity of the train car in these atypical contexts reflects an untapped love for trains. Perhaps the model train aficionados of the world love the idea of trains, but this isn’t enough. For most individuals, the physical presence of a train car will suffice; it doesn’t have to benefit from the propellant force of an engine. Perhaps more significantly, trains are such a novelty across much of the country that they attract attention simply by deviating from the typical locomotive one might encounter. A frozen yogurt shop built out of a train car is less likely to attract attention in New York City, where far more people perceive trains as an everyday occurrence.

The novelty factor may be the most intractable psychological explanation. Another huge attraction of my childhood was the Children’s Museum of Indianapolis; unlike the train car McDonald’s, it continues to this day as a hugely popular institution. It is, after all, the largest children’s museum in the world. Back in the day, it had a popular exhibit called Pasttimes, which taught children what childhood was like at various other time periods. One of the largest displays was a life-size recreation of approximately one block of an American main street, which, much like the Main Street USA of Disney World’s Magic Kingdom, impeccably reproduces the aesthetic and character of the standard commercial artery of a typical town. By the time I was a regular at the Pasttimes exhibit at the Children’s Museum, functional main streets were virtually non-existent, so it fascinated me to walk in a mock-outdoor setting with shops operating out of the first floor of three-story buildings, ruts in the street to represent trolley tracks, and benches on the sidewalk for people to relax and watch passers-by. (Needless to say, my eight-year-old brain didn’t make the connection between this indoor facsimile of a main street and the much more popular Greenwood Park Mall.)

Like so many of the exhibits at the Children’s Museum—the Broad Ripple Park Carousel being among the most popular and historically significant—the appeal targets children but usually manages to snag the parents as well. And that magnetism owes a great deal to the fact that, at least while I was growing up, vibrant small-town main streets only existed through carefully contrived reproductions, thereby prompting the often-alluring fusion of novelty with evocation—a Venn diagram where the intersecting circles become the essence of nostalgia. The reason the idea of main streets, trains, and carousels enjoy lasting appeal is because the cultural signals indicate to us a time when they were much easier to find, and, as signals fully immersed in positive connotations, they trigger pleasant sentiments in most of us—the nostalgia—even if they only count as actual memories for a small, elderly, and diminishing portion of the population. Regardless of whether Red Line Frozen Treats succeeds, I have no doubt that, twenty years from now, an exhibit at a children’s museum somewhere in the country will feature a careful recreation of a 1980s or 90s-era shopping mall, complete with fake plants, skylights, fountains, and neon signage. Right next to the replica of an SUV.

PrevRural hardship: a coalfield in McDowell County, West Virginia buries its pulse. It’s time to find it again.
Southwestway Park in Indianapolis: a rule is removed with the flip of a (wood) switch.Next

5 thoughts on “Self-serve from a sleeper: train cars out of context to coax new customers.”