Southwestway Park in Indianapolis: a rule is removed with the flip of a (wood) switch.

Southwestway Park, one of the largest regional parks in Indianapolis, features considerable opportunities for mountain biking, among other things. Here it is in the dead of winter. 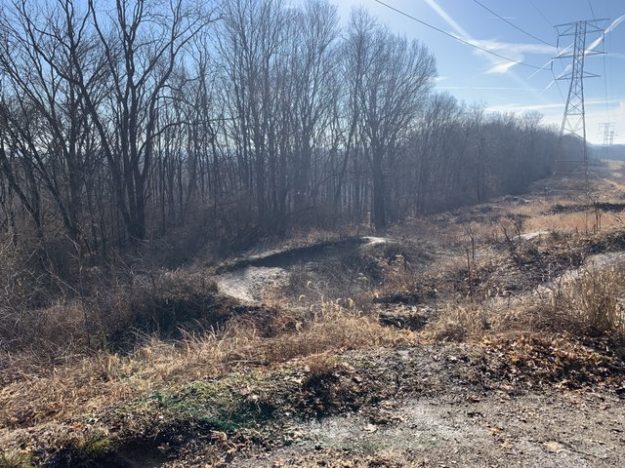 Yes, it even has some grade change, for those who think Indianapolis is 100% flat. (It’s only mostly flat, but still less flat than, say, Chicago or Detroit—a condition that gave runners a rude awakening back when one of the city’s big marathons took place in Fort Harrison State Park). Beyond mountain biking, Southwestway Park’s other major offerings get consolidated in a single sign at the entrance. 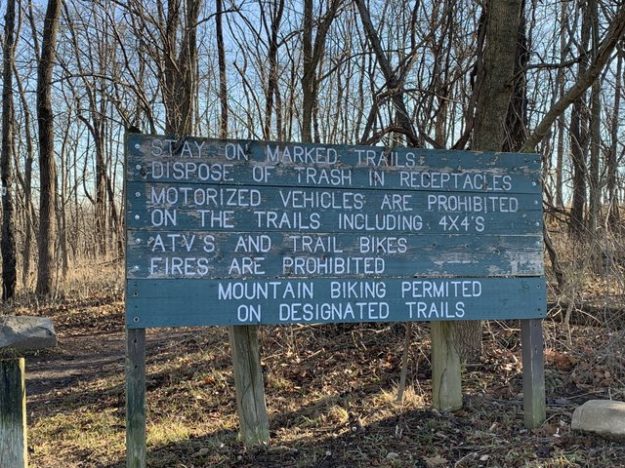 Okay, so it’s really more what visitors cannot do than what they can. But I guess this sign’s restrictions imply that just about anything else is fair game, right?

It’s hard to tell, and it becomes even more ambiguous when one scrutinizes some odd details. Take a look at the bottommost two wooden boards in the sign, with “MOUNTAIN BIKING PERMITED (sp) ON DESGINATED TRAILS”. The paint is fresher, newer, and not peeling. Now let’s take a look at the back of the sign. 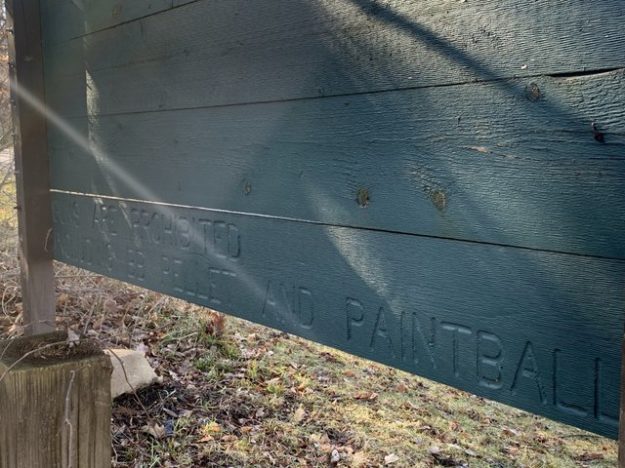 They used some existing boards, re-painted them in their entirety, then flipped them to cover a former message. For those who cannot read it, the sign says “GUNS ARE PROHIBITED INCLUDING BB PELLET AND PAINTBALL”. For all intents and purposes, Indianapolis Parks and Recreation has removed this message. Does this mean the restrictions themselves no longer apply at Southwestway?

It’s difficult to tell. The website for the parks system does not overtly reference them, nor paintball, pellet, or bb. The closest information I can find is a fairly old question on a gun owners’ forum that suggests it is unlawful to discharge a gun in any city park. One of the posters includes a mysterious list of “Indianapolis Victim Zones” (I can find no other reference to this) that details five regional parks, but Southwestway is not among them.

As a non-owner, I’m clearly not attuned to the nuances of these regulations the way some might be. So perhaps the citywide code is axiomatic and Indy Parks simply recognized that there was no need to post this restriction. Clearly we cannot shoot guns in parks. But it still seems like a cavalier solution, to simply save the cost of two wooden boards by painting one regulation and burying another. Would out-of-town visitors to Southwestway infer that gun discharges are forbidden? It’s an awfully big park. It almost feels like a State Park, where guns are often allowed. I’m not going to let this potential oversight stop me from visiting whenever I’m in town. Knowing me, I’d be more likely to hurt myself on a mountain bike then handling a gun anyway. Or—most likely of all—I’d wipe out while just running the trails.

PrevSelf-serve from a sleeper: train cars out of context to coax new customers.
One restaurant, two continents: culinary fusion or just confusion?Next

5 thoughts on “Southwestway Park in Indianapolis: a rule is removed with the flip of a (wood) switch.”