Strategically located in the middle of sun-baked somewhere, the military city of Ridgecrest, California offers the accidental visitor a surprisingly populous alternative to the preceding and subsequent miles of Mojave desolation. By contrast, the deliberate visitor’s most likely destination is Naval Air Weapons Station China Lake, a munitions and explosives testing range and research facility, with grounds that are larger than Rhode Island. Ridgecrest is the municipal home to the mix of military and civilians that work at NAWS China Lake, whose primary Access Control Points directly abut the municipality. The small city’s population lingers just shy of 30,000, but it offers enough amenities to compensate for its relative isolation; though it sits at the midpoint between Los Angeles and Las Vegas, it takes nearly three hours to get to either city by car. (Bakersfield and Lancaster are the two most populous reference points with malls and commercial passenger airports; Lancaster’s closest airport is in Burbank, an indisputable suburb of Los Angeles.) Bleak as the landscape in Ridgecrest may seem, its not far from major attractions: Death Valley and Sequoia national parks are also equidistant, a testament to the ecological diversity of California, though Ridgecrest clearly ascribes to the climate and landscape of Death Valley. It’s sparse—so much that, in July, a 7.1 earthquake and its aftershocks hit NAWS China Lake, causing hundreds of millions of dollars of structural damage, but no life-threatening injuries or fatalities. 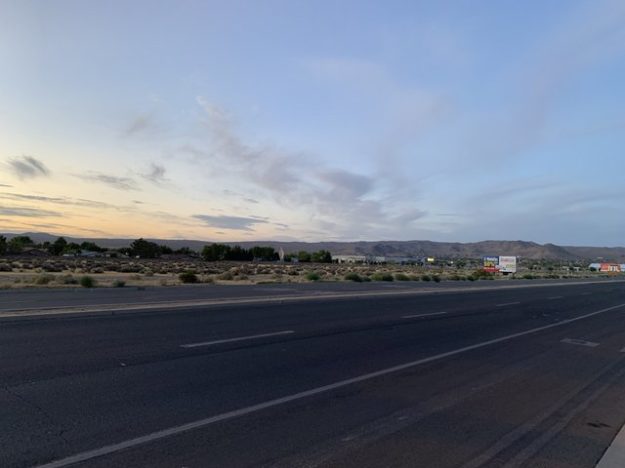 This southern approach to the heart of Ridgecrest pretty effectively captures the appearance; US Business Route 395 also serves as the city’s main arterial. Ridgecrest offers less of a downtown than many of the abandoned mining communities scattered throughout the area—certainly less of an identifiable main street. During the height of World War II, the California Institute of Technology and the US Navy collectively determined the need for a large site for testing rockets and aviation-related ordinance, preferable on lands both unpopulated and reasonably close to Caltech’s Pasadena campus. The China Lake region fit the bill; Ridgecrest blossomed from an unincorporated community called Crumville to a town supportive of a post office in 1941, with incorporation taking place about twenty years later. It’s a post-war community. 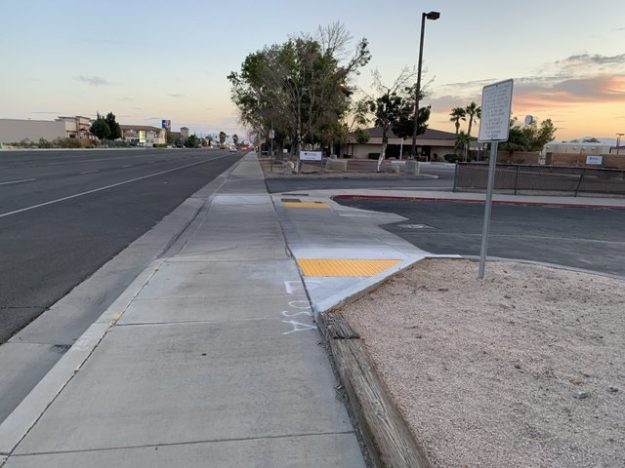 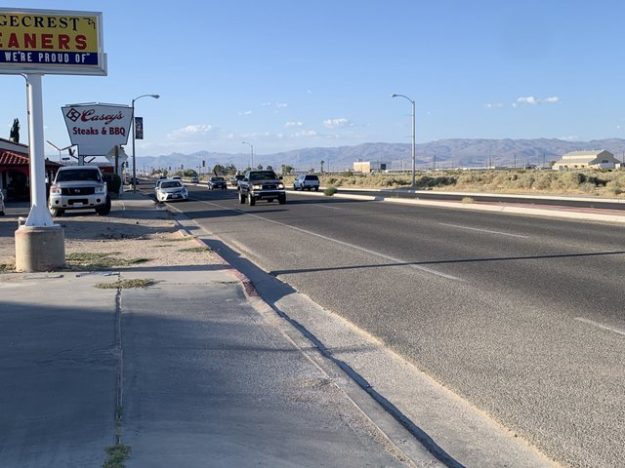 Despite the fact that Ridgecrest lacks a core business district, it features all the commercial and retail amenities one might expect for a city its size: several major grocery chains (Albertson’s, Walmart), other category killers (Big Lots, Marshalls, Home Depot, Joann Fabrics, Ashley HomeStore), the familiar fast-food restaurants (McDonald’s, Burger King, Carl’s Junior, Starbucks), and a surfeit of underutilized space, mostly in the form of aging strip malls and grayfields. In a post-war town development, that is how the community shops.

Nonetheless, despite indicators of retail collapse that have seeped into even a place as seemingly isolated as Ridgecrest (a condition to which small towns are clearly not immune), various real estate speculators are still pinning their hopes on striking gold with a new commercial shopping center. 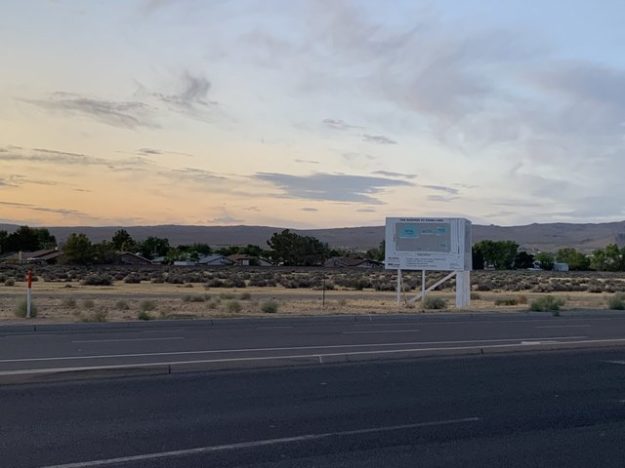 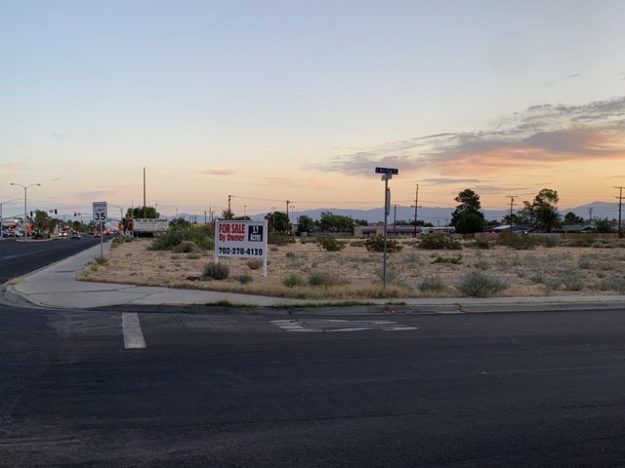 Along the southern half of US Business Route 395 (China Lake Boulevard), these signs are everywhere. Virtually any large patch of land abutting the city’s north-south arterial either hosts a sign, or a vacant strip mall. One of them offers a rudimentary site plan. 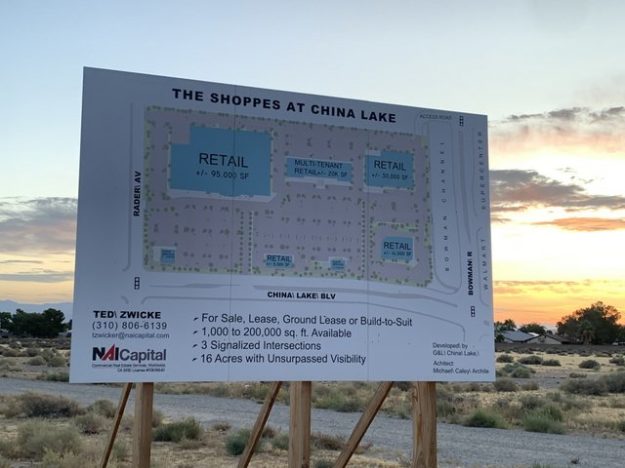 Note the bottom feature listed: “Unsurpassed Visibility”. That pretty much sums up the defining feature upon which this equity partnership is hedging its bets. Virtually all people entering or leaving Ridgecrest will pass along this highway at some point; the only other alternative is California State Route 178 (Ridgecrest Boulevard), the majority of which serves as a southern border to NAWS China Lake, so the land is largely off-limits for heavy private-sector development. US Bus 395 really is the alpha and the omega.

The problem, of course, is that the demand is simply not what it was even five years ago. I suspect that the commercial landscape of Ridgecrest, though never all that aesthetically appealing, at least offered a general vibrancy typical of high occupancy levels, certainly in the 1990s and maybe even through the 2000s. But many chains have gone bankrupt or downsized considerably; I witnessed the labelscar of a Kmart (still open in 2015 apparently), among other less discernible former tenants. And not enough retailers are stepping in to fill the void, either in Ridgecrest or Rodeo Drive 150 miles away. In aggregate, I’d estimate that the leasable space along China Lake Boulevard is 60% occupied, spread across at least a half dozen strip malls. Taking these estimates into account, its reasonable to conclude that at least one of these six shopping centers has no reason for being, due to age, condition, or surpassable visibility. If one were to consolidate all the tenants so that the more attractive plazas had 100% occupancy, at least two large ones would sit completely vacant.

Bearing this in mind, what are the real estate speculators thinking? Well, they probably still hope they can secure at least one top-tier anchor tenant based on their pitch (that unsurpassed visbility!) and rope some of the remaining tenants from the less lucrative nearby shopping centers during the construction phase. This approach would, of course, at least ensure the brand new Coldwell Banker property of a thriving financial record for a few years—long enough to make the equity partners the return on their investment that leaves them fat and happy before they discard the property to a lower-tier venture capital firm. But therein lies the problem: there does not appear to be a top-tier anchor tenant willing to take the plunge, so these development partnerships are left empty-handed. There’s not enough juice to prime the pump. And the signs just sit there in comparative neglect. 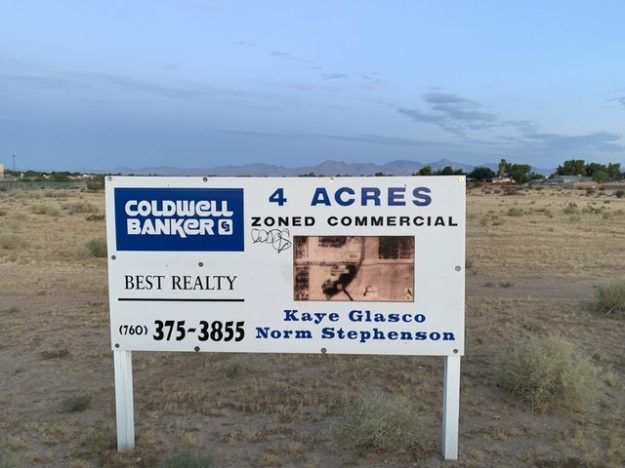 Notice the tagging on the one above, right under the word “Zoned”. It’s a fair indicator that this and all the other signs have stood on these grounds for quite some time. Nobody cares anymore. But I can find no clearer evidence than this beauty in the photo below, that the Ridgecrest real estate community is collateralizing its claim with iron pyrite: 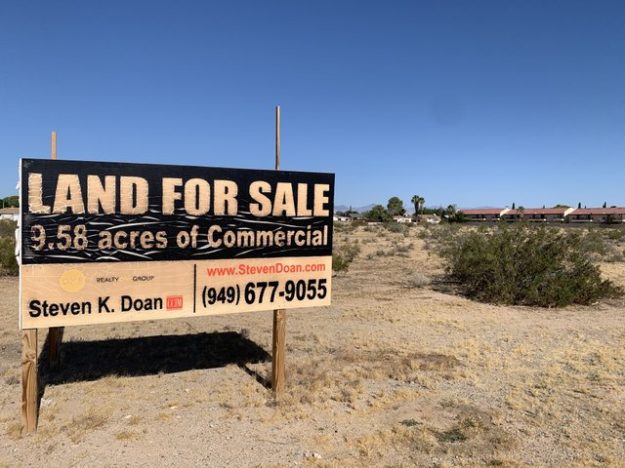 Yellowed and blistered by the scorching High Sierra sun, I wouldn’t be surprised if this sign predates the Great Recession. And everybody knows this. Even as the confident economy and recession-proof employment base of Ridgecrest continues to attract an enterprising, well-educated, technical (if somewhat urbanophobic) population, the demand for new commercial uses remains flatlined if not in slight decline. The owners of these large parcels along US Business Route 395 may ultimately decide that this is the best way to capitalize on that unsurpassed visibility: 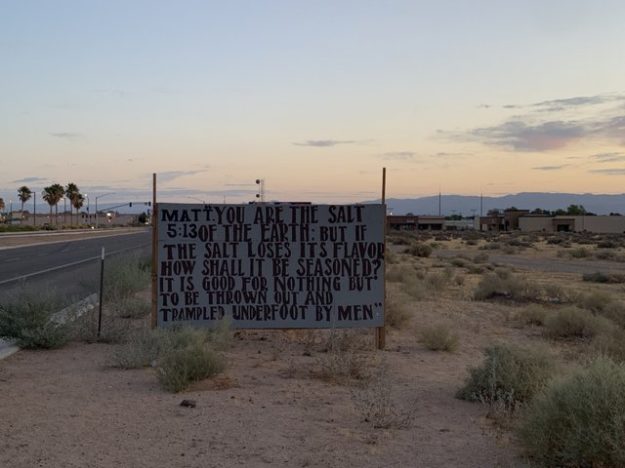 Who needs people?  The salt of the earth is right there underfoot.

7 thoughts on “Ridgecrest retail reticence: even remote communities are reeling from reduced relish.”