On a busy stretch of highway in southern Delaware, just a few miles away from the surging beaches, the motorist will encounter yet another of several grindingly predictable strip malls. 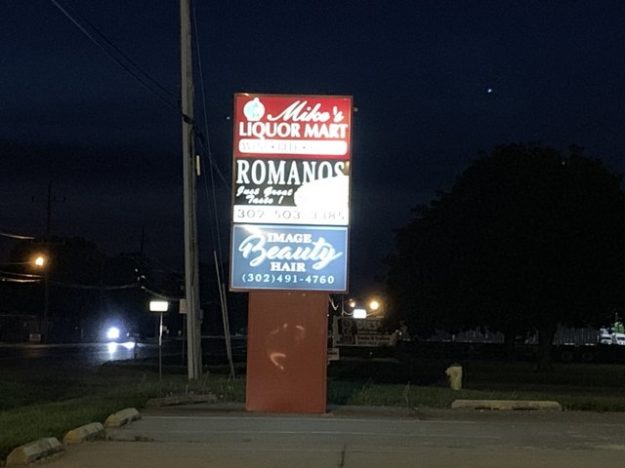 It’s small, as one would expect in a semi-rural area (getting more so to the west, the same direction my camera lens was pointing). The building itself offers nothing of significance. But the middle tenant featured on the sign is more of a curiosity. 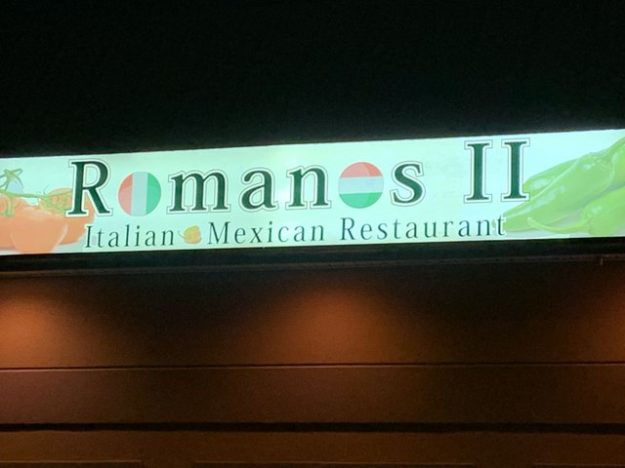 Romano’s II in Milford DE serves Mexican and Italian cuisine, reinforced by the enormous menu featured on the website—quite possibly the largest array of entrées I’ve ever seen. Obviously this is a perfectly acceptable culinary combination, but then, is there any fusion of two cultures that wouldn’t be? It raises eyebrows, however, not just because it’s a fusion rarely encountered, but because these two cultures are so far from one another—two different continents, primarily different climates and ecosystems, with no real historical connections (the Italians did not colonize Mexico) outside of a shared Romance language.

We rarely see such a hybrid because most outsiders will immediately develop a suspicion that at least one of the two cuisines in this fusion does not reflect the cultural history of the proprietors. While it’s very possible that Romano’s II involves a partnership between a person of Mexican descent and one of Italian, it remains an unusual venture. I’d even wager that, in fashionable, urban, affluent enclaves, where people are more likely to care about authentic ethnic representation, this sort of strategy would fail. But in the less selective purlieus, where land costs are lower and the market base is less competitive, culinary combos are increasingly common: most of us have seen Thai/Chinese or Thai/Vietnamese. Despite the 1947 partition, Indian/Pakistani isn’t unheard of, nor are regions that represent some broader cultural affinity: Caribbean, Middle Eastern, Central American. But these of course represent geographic proximity. According to the website, Romano’s II offers “classic New York and Mexican Taste”, which implies that the proprietor draws inspiration for the Italian half from its American transfiguration—suggesting to me that the restaurant’s greater affinity is toward Mexican food (a suspicion that the menu only substantiates).

My guess is that the proprietor is of Mexican ancestry; the homepage of the site boasts “Tortas, Tacos, Enchiladas, Burritos and Much More”, with nary a reference to the premier Italian items. And odds are good that this proprietor, though Mexican food is more in his or her métier, recognized the transcendent popularity of key Italian items and found a way to make them popular to a broad demographic. It’s a safe estimate: most Americans surveyed (77%) enjoy an ethnic restaurant at least once a month when dining out, and two of the top three cuisines are Mexican and Italian, ranking #2 and #3 respectively. The reigning champion is Chinese, but it’s a close competition; all three cuisines get favorability ratings of over 70% and it drops sharply after that, with Japanese coming in at a mere 32%. 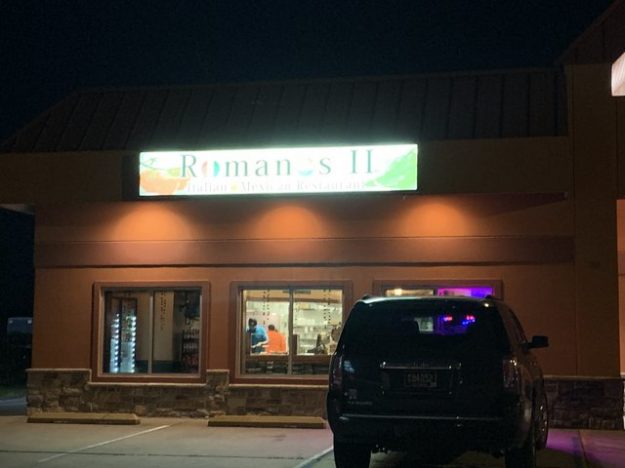 My suspicion is that hybrids like Romano’s II work well because of the availability and familiarity of these three cuisines, which vastly exceed that of Japanese, Greek, French, or Thai (the next four on the list). Any trip through rural and small-town America corroborates this. Even passing through a place much smaller than Milford (whose population has likely surged, like much of southern Delaware, past 10,000 in recent years), it is likely that it will at least feature a quick-serve Chinese counter (possibly only take-out), a locally operated Mexican sit-down, and a pizzeria. Most towns over 2,000 people, even those in far-flung locations, have all three of these options. I recall an article in recent years that suggested that Mexican and Chinese immigrants—far more likely to be first-generation than the Italians—have often sought the next largest town without a restaurant featuring their home cuisine, and then staked out a new business there because they will have cornered the market. Repeat this practice a hundred thousand times, and we get the culinary landscape of small-town America. Ethnic eateries are ubiquitous…i they’re Chinese, Mexican, or Italian.

Milford is the right size for Romano’s to thrive because it serves a community where the dining options are sufficiently slim that the two-cuisines-are-better-than-one approach becomes a selling point, rather than a self-defeating liability. And maybe it genuinely succeeds at most of the items on its expansive menu. The well-educated, cosmopolitan residents of certain urban neighborhoods may question the authenticity of such a venture—though this approach bespeaks both their discernment and snobbery, since a high-end Asian fusion restaurant is typically perfectly acceptable in these recherché quarters. But the gentry of Georgetown would likely smirk or even sneer at the prospect of a Mexican-Italian restaurant opening on Wisconsin Avenue, questioning its viability using the same criteria I’ve applied here. But if they’re coming back from a trip to the beach, shaking the sand out from their monster towels, who’s really going to question the social acceptability of tacos and tortellini?

PrevSouthwestway Park in Indianapolis: a rule is removed with the flip of a (wood) switch.
Ridgecrest retail reticence: even remote communities are reeling from reduced relish.Next