As I work on a longer, more photo-saturated post, I have to get a little snippet in because of some news that a reader recently sent me. The Cortana Mall (or the Mall at Cortana) in Baton Rouge recently closed. The only functional portion left is a Dillard’s Clearance Center, which, though physically connected to the mall, is under independent ownership—an ownership that sealed off the internal mall access many years ago. The remaining one million square feet of this hulking institution on the east side of town is completely shuttered. 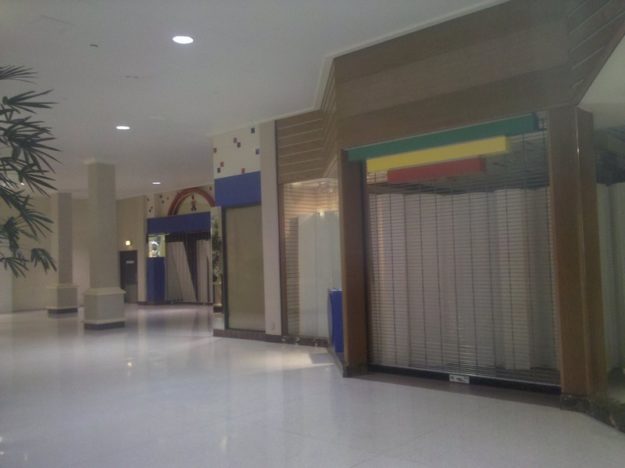 The closing of Cortana has personal significance to me, not only because I obviously featured a lengthy and engaged blog article on it, but because I saw the indicators firsthand, back when it still drew crowds. I did the bulk of my shopping there during the holiday season at the end of 2005, back when the crowds nonetheless seemed atypical because: a) Christmas was fast approaching and b) Baton Rouge was still packed to the gills with refugees from New Orleans after Hurricane Katrina. At that time, it still had five department stores and all the bustle one expects during the holidays, but the telltale indicators of weakness were present: lots of independently owned mom-and-pop stores, and the corridor leading toward the Sears suffered low occupancy. Having opened in 1976, Cortana Mall became the “other mall” for Baton Rouge after Mall of Louisiana opened in the more affluent southeast suburbs in 1997. 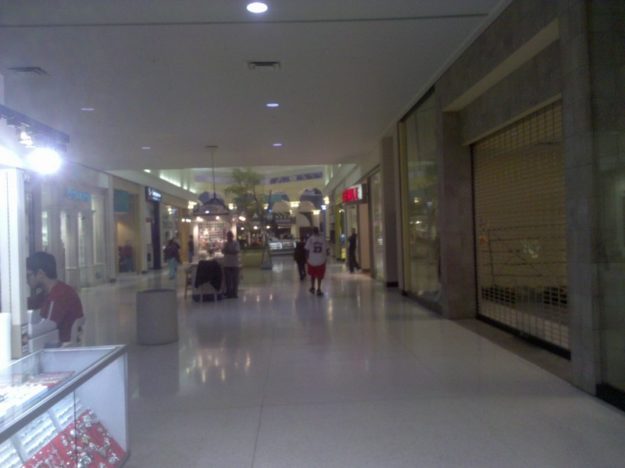 Fast forward to 2010 when I revisited and blogged about it, and Cortana was indisputably a dying mall, peppered heavily with vacancies and only a few national names surviving among the inline tenants. Most of the department stores were still there, but the Dillard’s had closed off its upper floor and a vacated Steve and Barry’s (chain went out of business) was preparing to receive the for-profit Virginia College. In those ensuing years, I didn’t visit Cortana, but blog followers informed me that the mall survived increasingly by catering to non-profit or quasi-public services, with the Virginia College location keeping the place feeing reasonably active. Nonetheless, the downward spiral continued, with all of the anchors (except Dillard’s) closing by the mid 2010s. As of summer 2019, when Bath and Body Works closed, the only remaining occupants were a post office, a church, a theater, a medical clinic, and a charity specializing in diaper drives.

But here’s the clincher: just a few weeks before the mid-September announcement, a hastily produced sign tacked onto the front door announced that the mall’s management would no longer allow mallwalking, apparently “for liability reasons”. Are they worried that mallwalkers would trip and fall and could sue the company? Is the place in that bad of condition? A video linked to the cited article from The Advocate (Baton Rouge’s primary paper) shows a mall of staggering vacancy but it doesn’t appear unmaintained. However, the article also indicates that the air conditioning was not operating inside the mall at that time. For anyone who has visited Louisiana, the weather conditions usually require air conditioning well into November, and for senior citizens—the typical mallwalking demographic—it could be particularly dangerous. Besides, most seniors gravitate to malls for their exercise because the malls offer free and climate controlled environments. My favorite part of the article, though, was the announcement that mallwalking was restricted as of 8/3/19, but then someone had scratched over the “8” with a “9”. How generous of management; it gave the mallwalkers one more month. 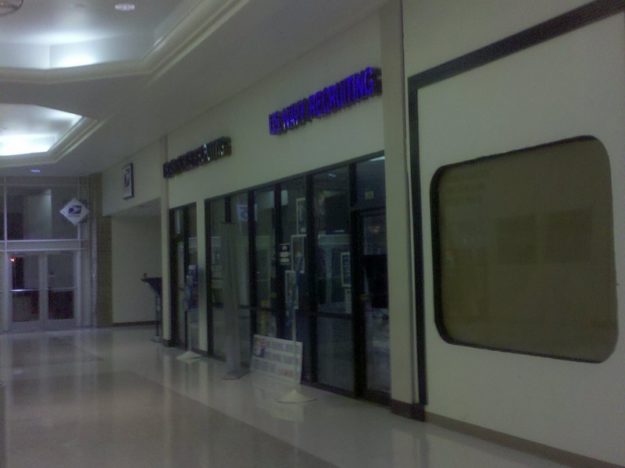 This restriction during Cortana Mall’s dying days seems unusual in light of a recent blog article, where another fading mall in Pennsylvania openly encouraged mallwalking by providing various metrics and paths to indicate the laps necessary for a mile. It’s almost as if this mall wanted the presence of people to give the place some life and activity. But the Pennsylvania mall was much smaller and easier to monitor; a hulking mass like Cortana could indeed leave a person stranded in an obscure corner, suffering an injury or infarction with few opportunities to summon help. But the lack of air conditioning is a deal breaker; who would even want to wait in line at a post office to experience Louisiana’s September heat with no opportunity for relief? It was clear to everyone in Baton Rouge that Cortana was in hospice care.

I have a suspicion that, as the dying malls become more prevalent (they’re already easy to find) and the former mega-malls face 90% vacancy, the management will start imposing more restrictions on mallwalking. This conclusion more or less contradicts what I said in my August article about the one in Pennsylvania, but I’ve changed my tune: mall management is likely in the long run to concern itself more with avoiding liability in those dying days rather than simply creating incentives for mallwalkers, who, as we all know, rarely actually spend money. But as our population ages and more of them seek comfortable, secure environments for exercise without shelling out the money for a gym, where are they going to go? Maybe the next generation of smart phones will develop an app with a mini-fan or space heater, so they can tote them around while walking outdoors in our generally safe, revitalized, well monitored urban centers. When we refer to the rising tide of senior citizens these days, it’s Baby Boomers we’re talking about. They’ll think of something.

[NOTE: All photos featured here come from the 2010 blog article. No doubt, in its final days, Cortana Mall was much more bleak even than these images.]

PrevFabulous Las Vegas farewells us: fabulous and fundamentally car-friendly.
A construction staging area and a sidewalk: never a healthy pairing, but sometimes the treatment is worse than the disease.Next