I generally hesitate before I dive into an article that focuses primarily on blight and disinvestment, in no small part because it carries with it a tenor of exploitation. And there’s evidence to back my claim: an early article I did on the now-demolished, life-after-people hellscape of Camden, New Jersey became not just one of my most popular and commented-upon posts, but the non-copyrighted photos got pinched by other clickbait “Worst Places in America” sites. (I’d say there’s a relation between the online ubiquity of these pics and all those comments for the Camden article, but that would imply those photo-thieves actually credited my work!) Regardless, if my photos depict an area of concentrated poverty and disinvestment, there had better be good reason: I need to justify it with a thoughtful analysis (as with Camden) or some considerable exploratory journalism and background history, as I did with a much more recent article on the Old Town Mall in Baltimore. 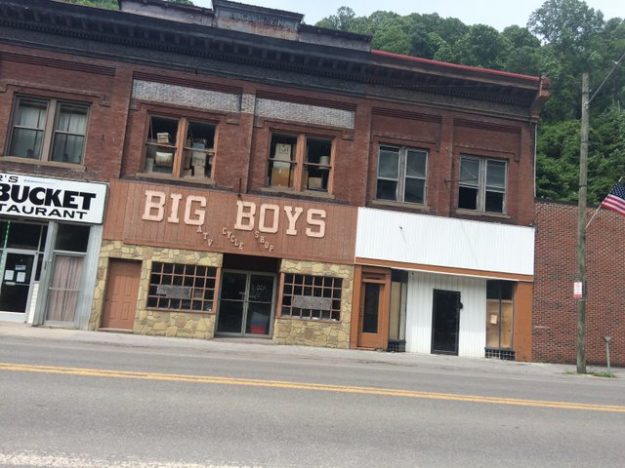 After my travels through McDowell County, West Virginia, I determined I would not scrutinize the obvious, conventional signs of blight. There’s plenty of content online chronicling this region’s challenges. The southernmost county in the state, its historic ties to coal mining resulted in a less diversified economy than the rest of West Virginia, though mining remains a sizable if diminished employer for this state in the heart of Appalachia. For as long as the mines were a bountiful resource, the population surged, with double-digit growth throughout the first half of the 20th century, peaking at just shy of 99,000 in 1950. By 2010 it had plunged to 22,000, a more precipitous drop than Detroit or St. Louis, and more recent Census estimates suggest it is now below 20,000. The county also has the notoriety of being ranked dead last out of 3,142 counties in life expectancy for both men and women, and near the bottom for other vital indicators that contribute to this dubious stat: heart disease, lung cancer, diabetes, and substance abuse. McDowell County is the textbook definition of a jurisdiction that has not found an alternative source of capital to replace the original industry that attracted people there. So those with the wherewithal to leave have done so. 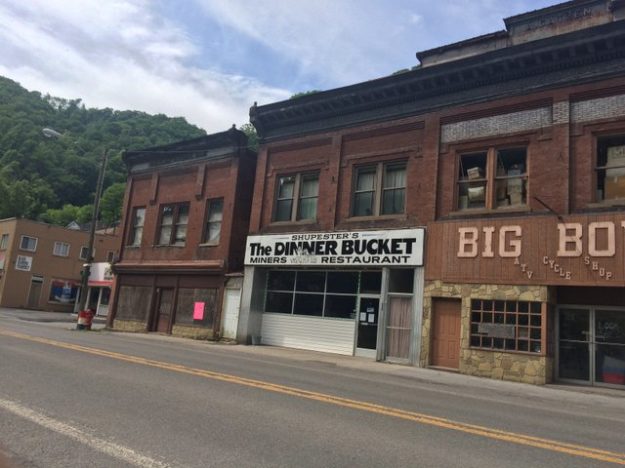 Unlike other parts of Central Appalachia, McDowell County and much of the rest of the Cumberland Mountain region does show all the evidence of advanced settlement. In using this term “advanced”, I distinguish it from, say, the Eastern Kentucky Coalfields about 100 miles to the west, where (at least the visual evidence suggests) the mining industry boomed so quickly that, by and large, mature towns with infrastructure never formed. Camps emerged to serve the mines until they had tapped the mountain of resources. The rural roads in Kentucky due east of McDowell County primarily feature mobile homes and manufactured housing on septic systems. Some, I would imagine, use electric generators; precious may even lack electrical service altogether. By contrast, in McDowell County, septic is probably the norm for homes outside incorporated areas, but actual municipalities are out there: the county has ten of them. Most homes in McDowell (I’d guess at least 75%) are not mobile or manufactured; they sit on permanent foundations. And the county seat, Welch, which I briefly featured last year, is surprisingly dense and urban, given the area’s reputation. It enjoyed prosperity long enough to claim theaters, dry good stores, majestic municipal buildings, and even what one might call a modest skyline. Though only 1,800 people today, Welch had 6,500 at its 1950 peak, and the surviving architecture makes the town appear much larger than it is. Here’s a brief glimpse of downtown Welch: 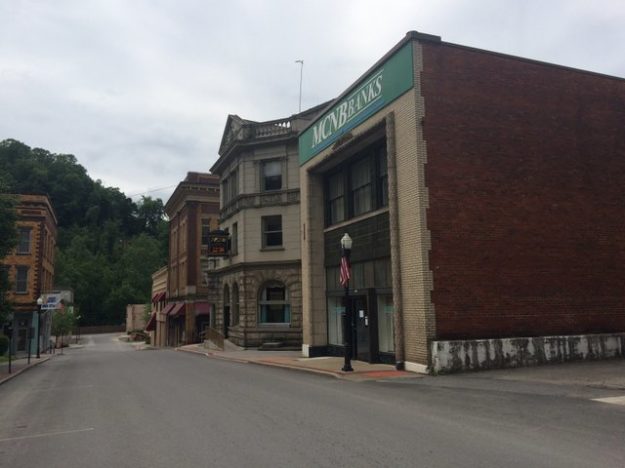 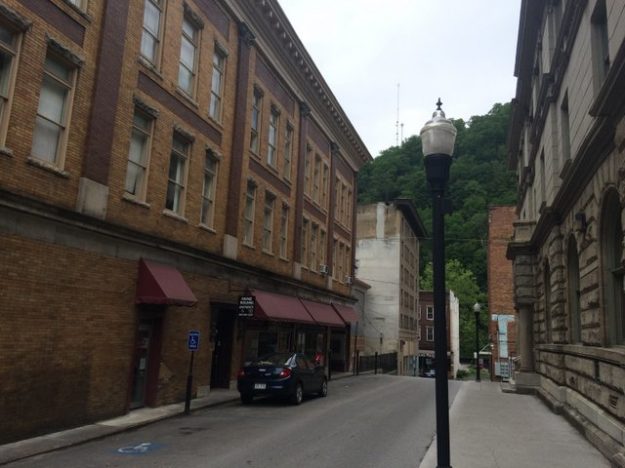 That said, despite the evidence that McDowell County attracted a population that intended to remain, they have not remained, so evidence of rural abandonment is widespread. But blight is such an obvious sign of economic hardship; the subtler indicators are much more interesting and, in some regards, more harrowing for what they reveal about the challenges facing the few thousand people remaining in an area that subsists on little more than minimum wage jobs. Several miles east of Welch along U.S. 52 (Coal Heritage Road), drivers pass this nondescript building: 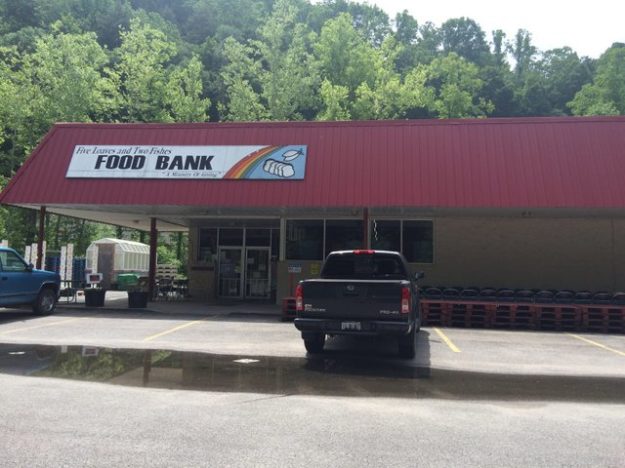 It’s a food bank: Five Loaves and Two Fishes. While not striking in appearance, it’s the reuse that bespeaks the financial challenges of the region: the squat, windowless façade hints at a former grocery store, which apparently didn’t survive. Now the building serves a logistical station to deliver food as a means of charity through a nonprofit entity. And while it’s not the only food retail in McDowell County, it’s among the most prominent: I noted one full-fledged Save-a-Lot grocery store (about the same size as this building) and a few dollar stores. There’s little else outside of gas stations, where the unit prices tend to be terrible. Until January of 2016, McDowell County had a Walmart, but it closed as well: not because another, larger one opened at a smarter location in the area (as has historically been the case), but because, after about a decade in operation, it didn’t get enough business. With its closure came one of the best resources in the county for produce, for durable goods, and for employment—only 140 before it shuttered (down from around 300 at its peak), but still the county’s largest employer. According to the cited Guardian article, the assessed value of the Walmart generated about $68,000 in taxes, which mostly served the school district—all gone, forcing McDowell County employees to take a 10% pay cut.

Not much further down, a much more visually striking building perches itself partway up a slope from the roadway that limns the valley. 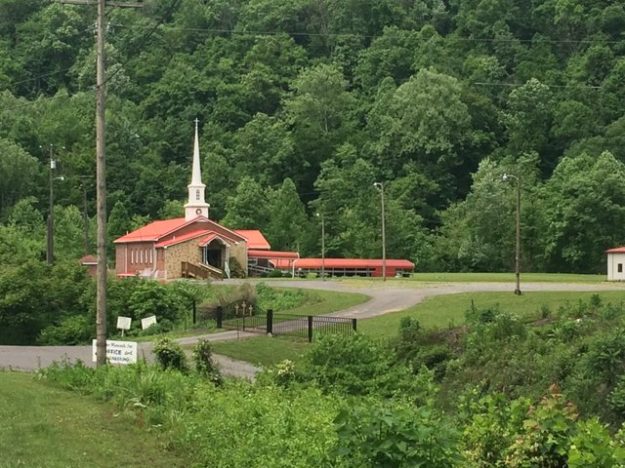 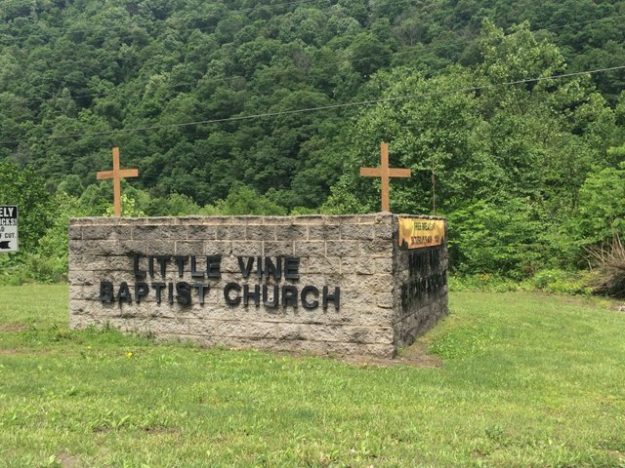 Compared to most other structures in McDowell County, Little Vine Baptist Church is immaculate. No doubt it survives against strong odds; the number of churches in McDowell County has plummeted along with the population. Both the building’s physical condition and its most widely promoted service suggest that Little Vine’s coffers are reasonably confident: 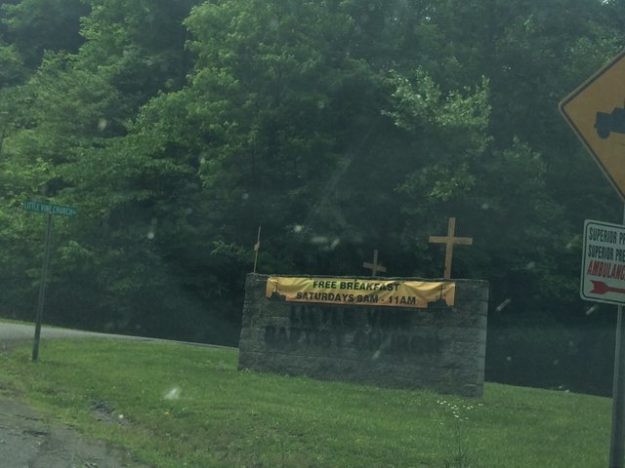 It serves a free weekly breakfast to surrounding community between Welch and Kimball, a neighboring town that had 1,580 people at its 1940 and has dropped to below 150. In a region where one out of three people fall below the federal poverty line, it’s likely that Little Vine’s Saturday breakfasts bring people from considerable distances to a community space helping to fill Walmart’s void.

Another clear indicator of the challenges facing a rural community that has shrunk by 80% is the infrastructure for public services. The devastated budget, only exacerbated by Walmart’s closure, doesn’t necessarily manifest parsimony in places like Welch, where government buildings still appear sturdy if unadorned. 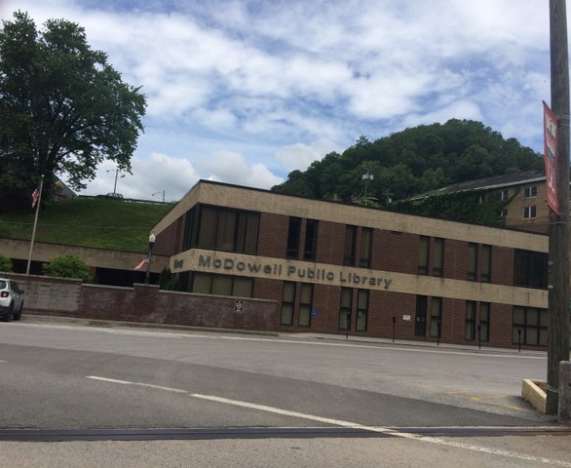 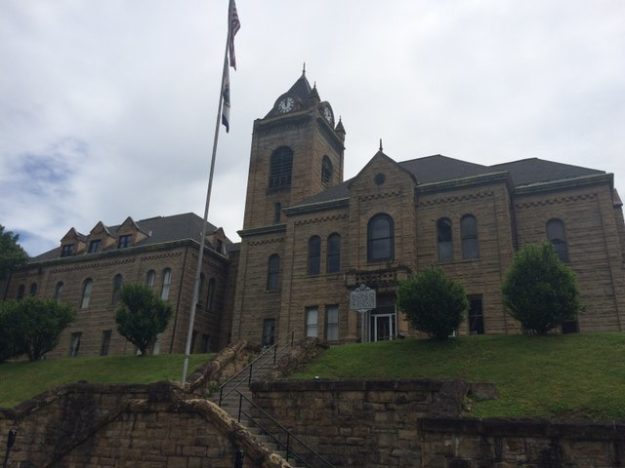 No, the better indicator is the outreach along the remote tendrils of highway that stretch out from the more urbanized hub. 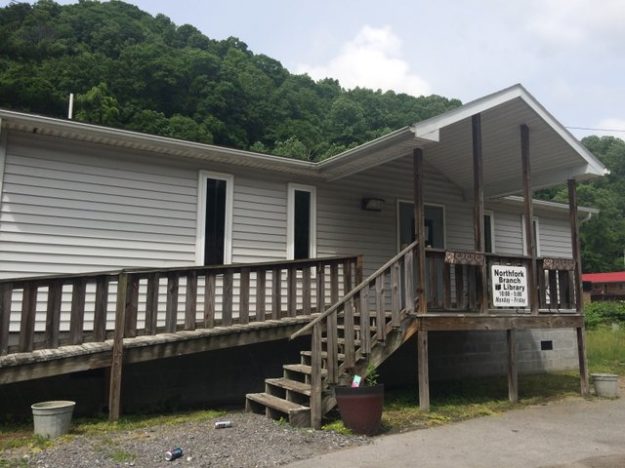 The Northfork Branch Library can claim nothing more than the equivalent of a two-bedroom manufactured home, which is probably barely 900 square feet to hold all the books that serve a rural community the size of one New York’s larger boroughs, like Brooklyn or Queens. This obviously inapt comparison doesn’t take into account that the library is serving less than 1% of the population of an NYC borough. To be frank, libraries in remote rural areas may actually have a strategic advantage over their urban counterparts: while the satellite branches of the District of Columbia library increasingly cater to digital and educational services more than books, the demand for reading material likely prevails in Welch and surrounding towns. Then again, a library in McDowell County would almost certainly need to cater to the population with computer labs; broadband service is hard to come by in rural areas (my phone didn’t offer 3G or 4G anywhere), but a library should actually supply a vital public service as a free online portal. It’s just a shame it gets relegated to such a humble structure—the fact that it uses a manufactured home suggests that it is ready to roll up and leave with the next budget cut.

For my last indicator of rural hardship I choose a characteristic that’s more obviously predicated on blight, but it’s still an odd one. 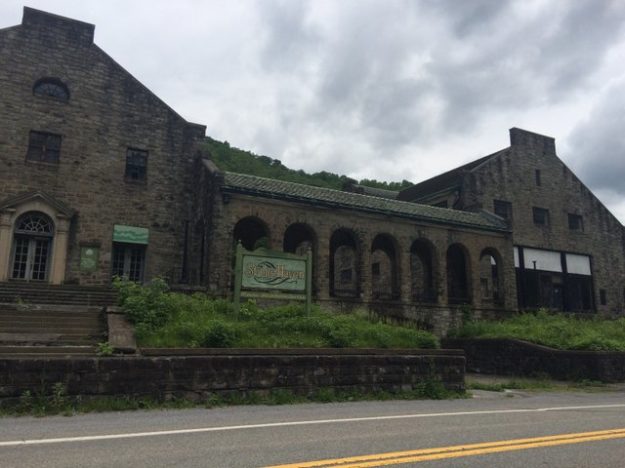 This magnificently carceral building has been closed long enough that I cannot find any info online, but not long enough to show considerably evidence of decay. (Given the nature of construction, it’ll probably remain intact for quite some time.) I’m not sure I know what conclusion to form by the closure of Stonehaven Homeless Rehabilitation Services. Is it a positive sign—that enough people can find shelter to preclude the need for such an institution in McDowell County? Did it close for the same reason as Walmart? Did it lose a state subsidy? Or is McDowell County just so remote and sparse that homeless individuals are now seeking assistance at more robust, well-networked areas, such as Beckley or Bluefield, both cities with populations above 10,000 (at least for now) that still offer all the amenities and services one might expect from a small urbanized area—least of all a Walmart? 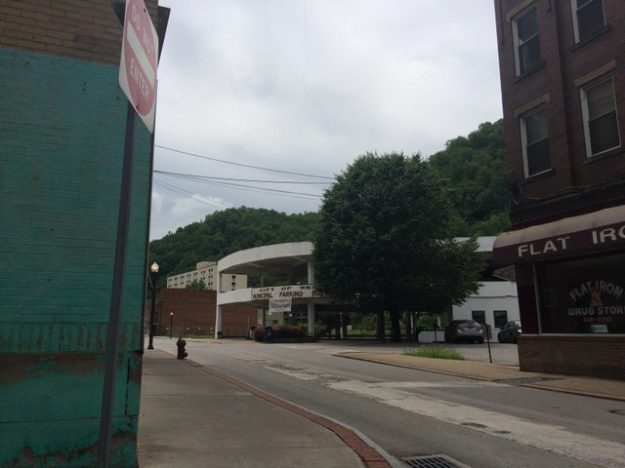 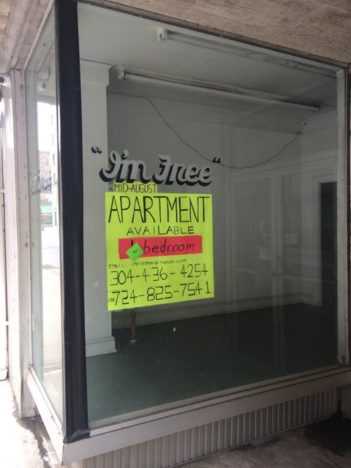 It’s hard to determine what the future might be for any of these operative businesses scattered throughout McDowell County. Perhaps (if I remember) five years from now I’ll at least visit these websites and Facebook pages, to see if the links remain active. In most cases, I’ll confess that I’m not sanguine. The population loss in McDowell continues unabated; Census estimates suggest it has dropped nearly 20% just since 2010. Callous though it may seem, perhaps it’s better that the coalfields region continues to depopulate. By some metrics, it’s an indicator of upward mobility: given the lack of prospect for any new employer coming to the area, such a steady exodus indicates that many people have moved to areas with better opportunities. But, as is always the case, one must acknowledge the few thousands left behind, suffering among the highest premature death rate in the nation (another contributor to the steady population loss) and that the provision of basic government services—or even the continued operation of the single Save-a-Lot—may be under jeopardy, leaving this breathtaking landscape as disconnected from civilization as one can imagine, given that the nation’s capital is just six hours away.

PrevSmall-town parking meters: when the knob doesn’t even turn over a two-bit solution.
Self-serve from a sleeper: train cars out of context to coax new customers.Next

11 thoughts on “Rural hardship: a coalfield in McDowell County, West Virginia buries its pulse. It’s time to find it again.”