Both nestled in and perched on the Willamette Valley, Oregon’s largest city of Portland (by far) has its share of dramatic slopes and sublime vistas. This should come as no surprise. And although nearly three-quarters of the municipal limits sit to the east of the Willamette River, downtown Portland and most of its highest points are west, in the foothills of the Tualatin Mountains. Washington Park, the city’s highest-profile (though not its largest) green space, is within a short but arduous walk from downtown Portland and the Riverfront. But for visitors to the Rose City, Washington Park features some key attractions: the Oregon Zoo, the Children’s Museum, the signature International Rose Test Garden that helps endow the city with its nickname, and the internationally recognized Japanese Garden. 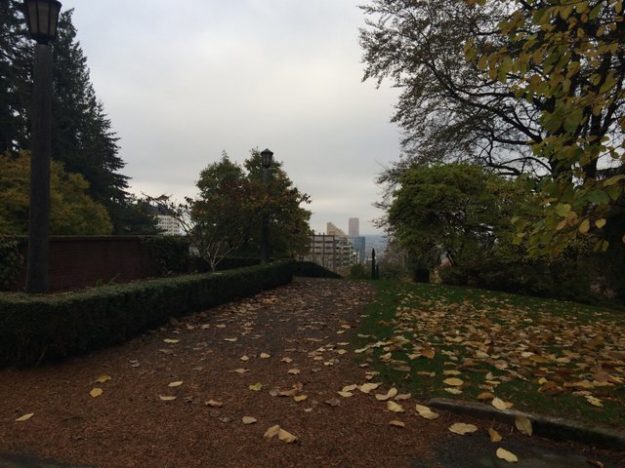 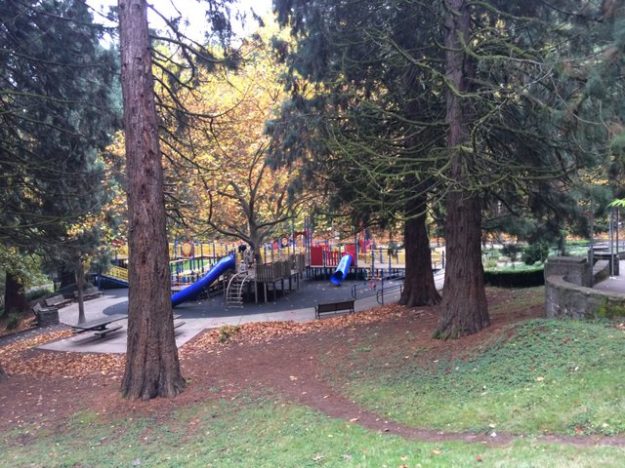 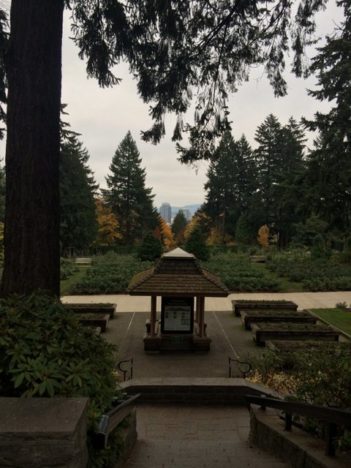 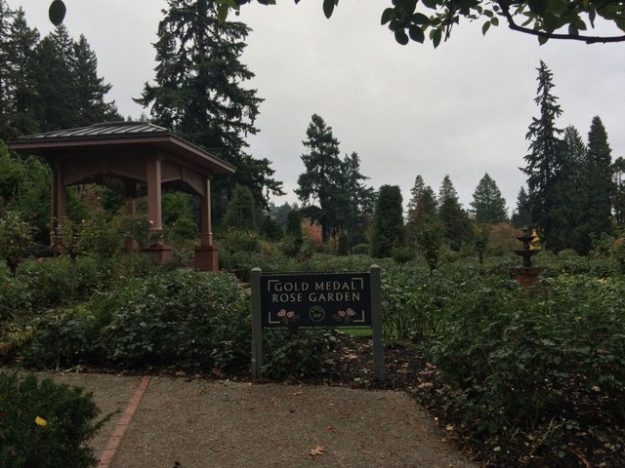 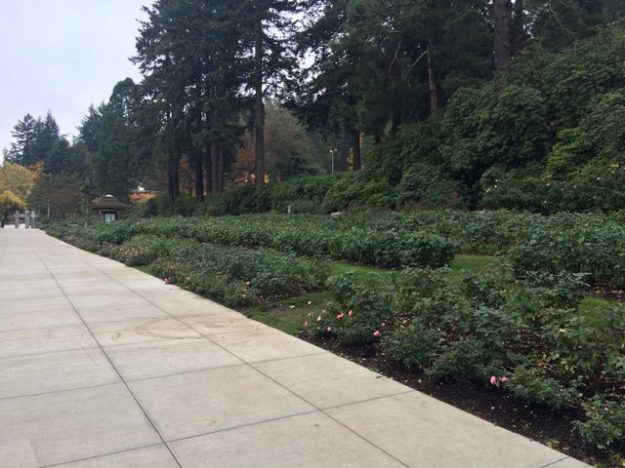 Though I’m not sure most children are likely to get too excited about roses, a considerable number of Washington Park’s attractions clearly aim for kid-friendliness. But that’s not the only demographic that the City’s Parks and Recreation Department consciously accommodates. Check out this painted indicator on the pavement. 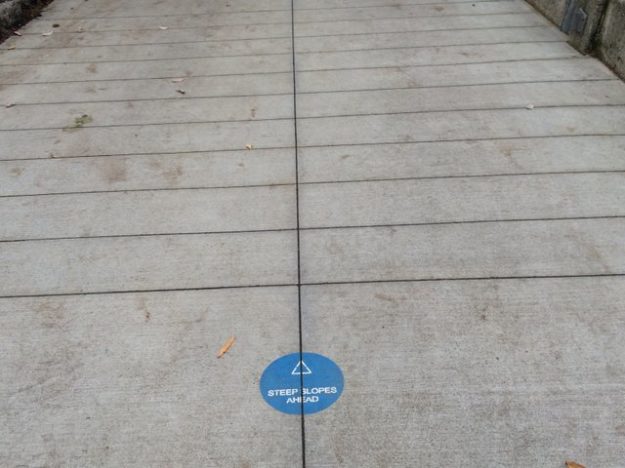 The travel paths recognize the topography, as well as the likelihood that many visitors may struggle with it. Here’s a sign indicating more specific accommodations. 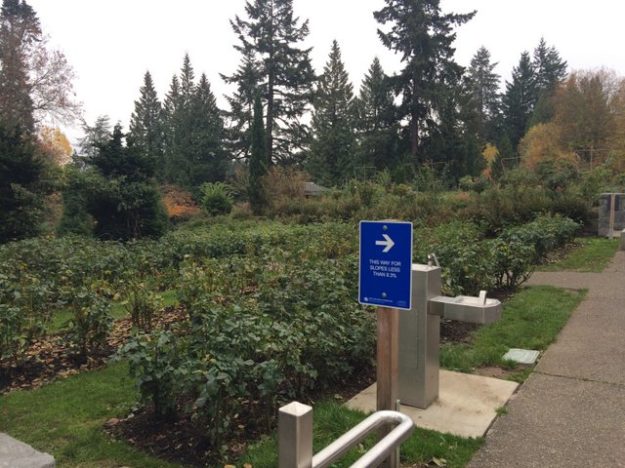 The typeface is somewhat small, but the arrow points the way to slopes that are less than 8.3% grade. What’s so special about this seemingly random number? Per the Americans with Disabilities Act (ADA), it’s the maximum permissible running slope for wheelchair users—the equivalent of a 1:12 ratio between the rise and the length. Here’s another sign at the edge of the Rose Test Garden, providing the path westward and upward to the Japanese Garden. 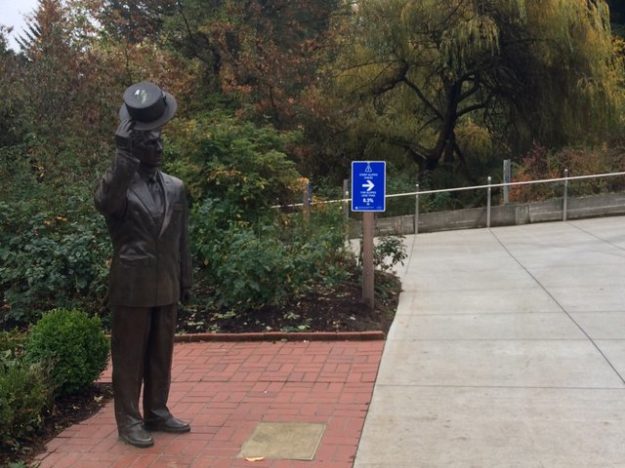 And here’s a sign, indicating that the ramp falls within the ADA-prescribed limits for a running slope. 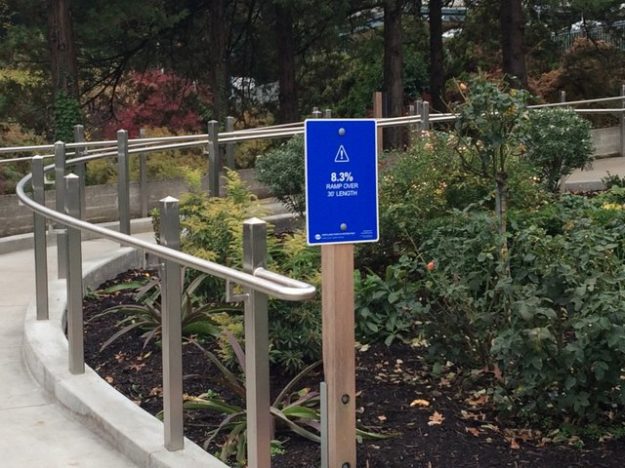 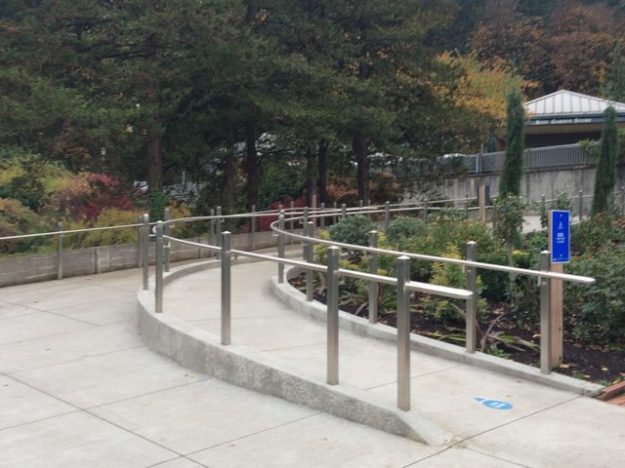 The small text indicates another dimensional standard: 30” length. To be frank, I’m not sure what this means, since it’s obvious to the untrained eye that this ramp is considerably more than 30’ long. Perhaps it’s a mistake and the actual intended reference is 30’ height/rise? The ADA provisions generally require a rise of no greater than 30’ to a ramp before a landing or resting place should get provided as a connecting vertex between to ramp segments. But this ramp is curved and lacks both a landing and ostensibly exceeds the maximum rise.

These details—and probably even the ramp itself—are hardly remarkable to those who are not attuned to this type of thing, but it reveals an attention to detail I’ve rarely seen in an urban park. While the ADA applies to most public buildings, and new commercial construction above a certain square footage must also provide wheelchair access, the Rose Test Garden and Japanese Garden do not feature much in the way of buildings. And the slopes throughout Washington Park are formidable. Here’s a better illustration of that grade change with the warning stencil sprayed onto the pavement. 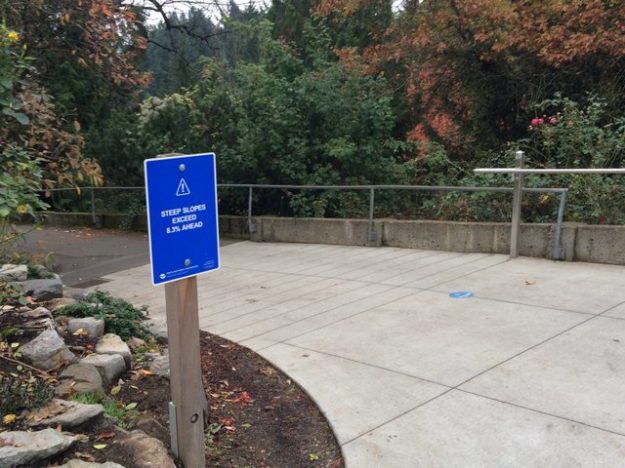 This slope does not have a gentler grade change to accommodate wheelchair users, and while it might prove arduous for both a manually and motor-operated chair to ascend, this marker is at the top of the slope, suggesting the possibility of a user losing control due to the cumulative momentum while going downhill. Not being a civil engineer myself, I’m not certain what prevented the Portland Parks and Recreation or the Public Works Department from constructing compatible ramps here, though the usual culprit is cost. Regardless, this portion of the park at least offers a sidewalk that is fundamentally usable, however treacherous. Other more obscure entrances to Washington Park are bereft of such wheelchair friendly features. 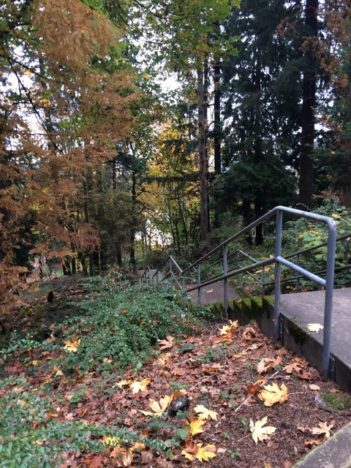 But I don’t want to cavil. Frankly, I’m more impressed by the attention to detail on the primary linkage between two of Washington Park’s most compelling attractions for grown-ups. Difficult as it may be to install the requisite ramps to a 100-year-old government building in a congested downtown, at least downtowns typically feature some degree of excavation, grading and clearance to mitigate the challenges posed by slopes. Conversely, cities with variegated topography often situate their prime parkland in the hilliest areas. Even the flattest of cities will often dedicate parkland along rivers and in floodplains—areas with considerable grade change. Bearing this in mind, it’s hard not to speculate that the solutions in Portland will set the standard for future investment along the seemingly innocuous pathways of many an urban park, improving accessibility in anticipation of an aging population that is likely to become more wheelchair dependent as time goes by. Though imperfect, the Portland approach is at least more effective—and a lot less extreme—than these almost comical initiatives in Jackson, Mississippi and a small town in West Virginia. It’s hard not to wonder how long before the standards established in the early 1990s (shortly after the adoption of the ADA) prove obsolete and our cities face a new array of slopes, signals, and signage.

PrevPedestrian fencing in the median: jerry-rigged to stop jaywalking?
Small-town parking meters: when the knob doesn’t even turn over a two-bit solution.Next